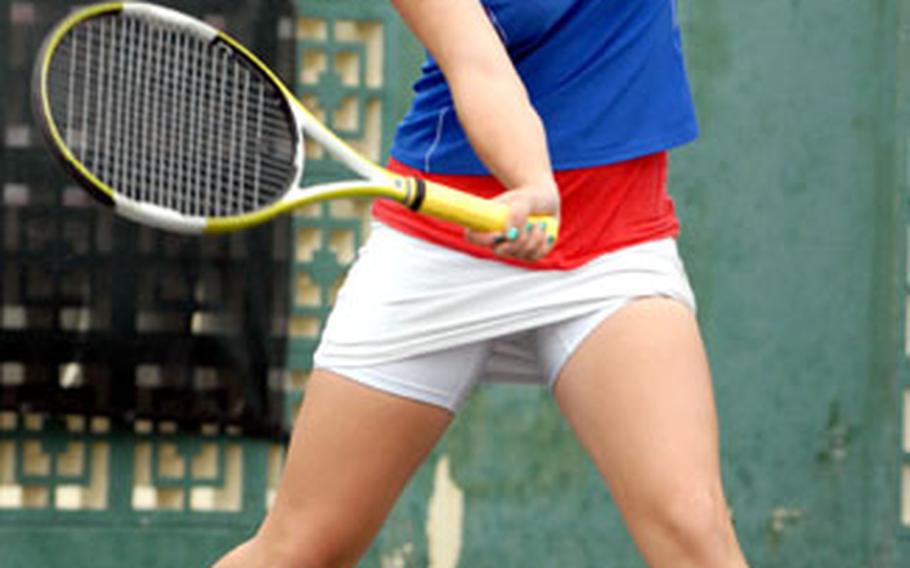 KADENA AIR BASE, Okinawa &#8212; It was a special Wednesday for super sophomores Kennedy Allen and Kyle Sprow, the proud Japanese tennis instructor who helped build their games and a Seoul American squad that continues to take delivery on Far East tournament team titles.

&#8220;She has all the strokes, the intelligence, she&#8217;s patient and she&#8217;s just like Kristia in that she never gives up,&#8221; Seoul American assistant coach Robert Victoria said of Allen.

From the start, Allen took charge against Suriben, using her powerful forehand to keep the two-time champion back on her heels. Allen would either paint the sidelines with hard volleys or groundstrokes, or would deftly drop a shot over the net, leaving Suriben to chase it.

A service break in the third set threw the door open for Sprow to take command against Takahashi. With the set level at 1-1, Takahashi broke Sprow&#8217;s serve and looked to take control, but Sprow broke right back and won the last five games of the set.

&#8220;His consistency is his biggest attribute,&#8221; Kadena coach Robert Bliss said of Sprow, adding that he&#8217;s turned his game around since struggling through the Okinawa district singles tournament with back spasms. &#8220;He started playing some of his best tennis then and it&#8217;s carried over.&#8221;

Takahashi and Suriben did not leave empty-handed, and each gained a measure of revenge on their singles conquerors.

Suriben and her sister Rizalina, a sophomore, turned the tables on Allen and her girls doubles partner Esther Kim. The Suribens made quick work of the Falcons pair 6-1, 6-2.

Sprow and Allen each began their careers by taking lessons from 18th Services teaching pro Tokio Nakamatsu in the early part of the decade. He watched both his pupils capture their Far East gold medals from the spectators area at Risner.

Likewise, Seoul American continues to make strides. The Falcons outdistanced Kadena 62-48 in the final team standings, while E.J. King and Yokota tied for third with 36 points.