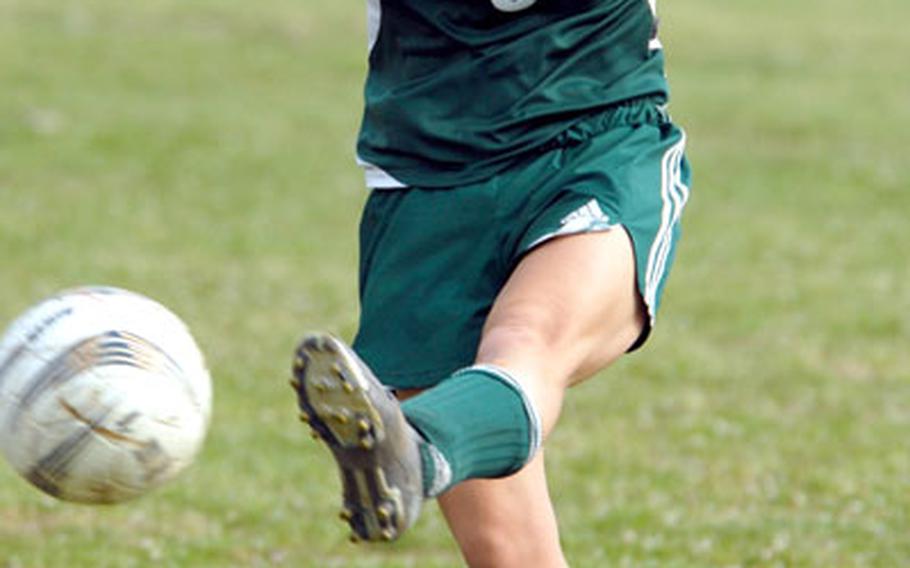 What&#8217;s your opinion on the Kadena-Kinnick girls soccer controversy? Tell Dave Ornauer what you think at Stripes Blogs.

Nile C. Kinnick of Japan beat the Panthers 2-1 in Thursday&#8217;s semifinal, a match called off in the 77th minute when Kadena coach Hoa Nguyen ordered his players to sit on the field and stop playing. Referee Lee Zukowski whistled the end of the match at that point.

Nguyen said he ordered his team to stop playing because Zukowski, a civilian working at Yokosuka Naval Base and a certified referee since 2002, is the father of Kinnick captain Frances Zukowski. Nguyen filed a protest, but it was denied by tournament organizers.

&#8220;The result of the match will stand, 2-1, Kinnick over Kadena,&#8221; tournament director Bonnie Seeley said. She and a protest committee met for almost three hours, and determined there was no conclusive proof of conflict of interest or fixing the match in Kinnick&#8217;s favor.

Nguyen accepted the ruling, sending Kadena to Friday&#8217;s third-place match against host Yokota, but he didn&#8217;t agree with it, nor Zukowski&#8217;s presence on the field.

DODDS-Pacific and tournament officials said only nine referees were available to work the tournament, four of whom were certified to work as center referees. All are either GIs or DOD civilians from Kanto Plain-area bases who referee on a part-time basis.

Don Hobbs, DODDS-Pacific&#8217;s Far East Activities Council chair, said a future solution would be to ensure both coaches know before a match starts that a player&#8217;s parent is refereeing &#8220;if we run into shortages. We should get the approval of both coaches. They should know in advance. We have to use better judgment and make it known.&#8221;

On the field, Frances Zukowski scored one of Kinnick&#8217;s two goals in the first half, her 29th of the season, and Tara Bartkowski added her 37th, while Kadena answered with Cassie McDonald&#8217;s 11th goal. It remained that way to the end.

Kadena senior striker Jen Abel, with 83 goals and 29 assists this season, received her second caution of the match in the 69th minute and was sent off for dissent. Eight minutes later, the sit-down ended the match.

Kubasaki girls survive shootout; Kadena, CAJ reach boys finalIn Friday&#8217;s final, Kinnick was to face Okinawa&#8217;s other girls team, Kubasaki, which moved a step toward its first title since 2003 by surviving a penalty-kick shootout with host Yokota. The Dragons&#8217; senior goalkeeper, Alix Mackey, saved a shot by the Panthers&#8217; Bethany Rogers in the fifth shootout round. Kubasaki won the shootout 3-2 and the match 2-1.

Kubasaki lost the 2005 final to Kadena in a shootout and the 2006 semifinal to American School In Japan the same way.

The Panthers will face 2005 champion Christian Academy In Japan, 3-2 winners over Yokota in Thursday&#8217;s other semifinal. The Knights reached their third Class AA title match; CAJ also won the 2002 Class A tournament title.

&#8220;Both teams had to fight hard. It could have gone either way,&#8221; said Sean Collier, whose CAJ team beat Yokota four of the five times it faced the Panthers this season. &#8220;Even though we had beaten Yokota, we felt they were dangerous and we took them seriously. They fought tough and made it a tight game. We&#8217;re glad we got past this one.&#8221;