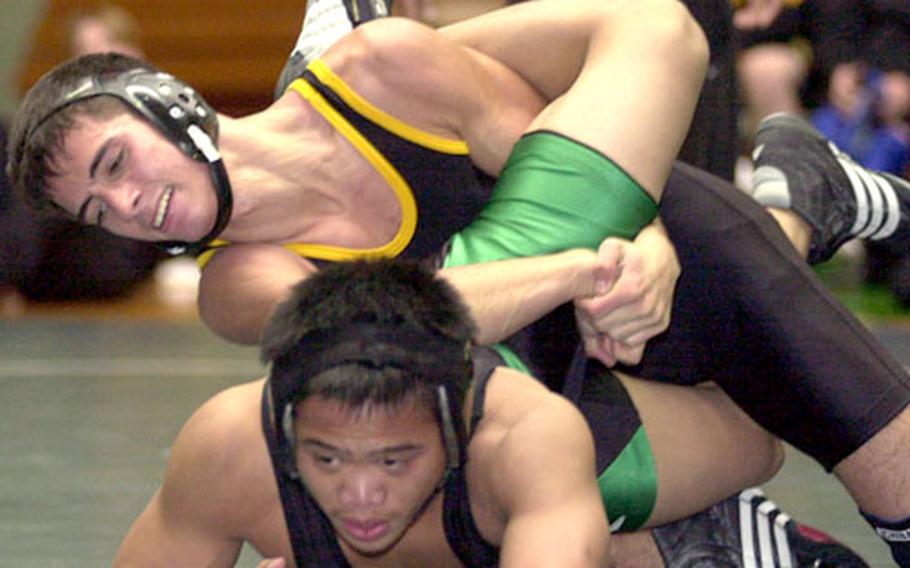 But Wednesday, Osan American&#8217;s Jessica Richert came as close as anyone in six years, scoring 40 points and grabbing 33 rebounds in the Cougars&#8217; 58-32 home win over the Taejon Christian International Dragons.

But Wednesday, she took over, shooting 20-for-40 from the field (she missed both her foul-shot attempts) and dominating the boards with 33 rebounds, 16 on offense, with many of her points coming on putbacks. She even recorded five steals.

Richert has been a bright spot in a rebuilding year for the defending Far East Class A tournament champions, who lost forward Mina Davis and guard Sharon Kroening to graduation and 6-foot-5 senior center Margaret Nurse via transfer to Seoul American. Osan improved to 4-7 with the win.

Kadena Panthers senior Ian and sophomore Austin Copeland hope to make the Copeland family the second to have that distinction. They want to follow in their older brother Devon&#8217;s footsteps and step on the gold-medal podium later this month at the Far East tournament at Yokosuka Naval Base, Japan.

Devon, now at the U.S. Air Force Academy in Colorado Springs, Colo., defeated Joey Wood of Kinnick 5-4 in overtime for the 168-pound gold medal a year ago at Yokota High School.

They made quick work of their Thursday opponents, with Austin pinning Jake Haynes in 51 seconds and Ian nailing Brandon Murphy in 1 minute, 14 seconds, powering the Panthers to their ninth straight Okinawa Activities Council dual-meet victory over Kubasaki 36-25.

The Copelands each said they believe Kadena could be primed for a shot at its first Far East tournament team title.