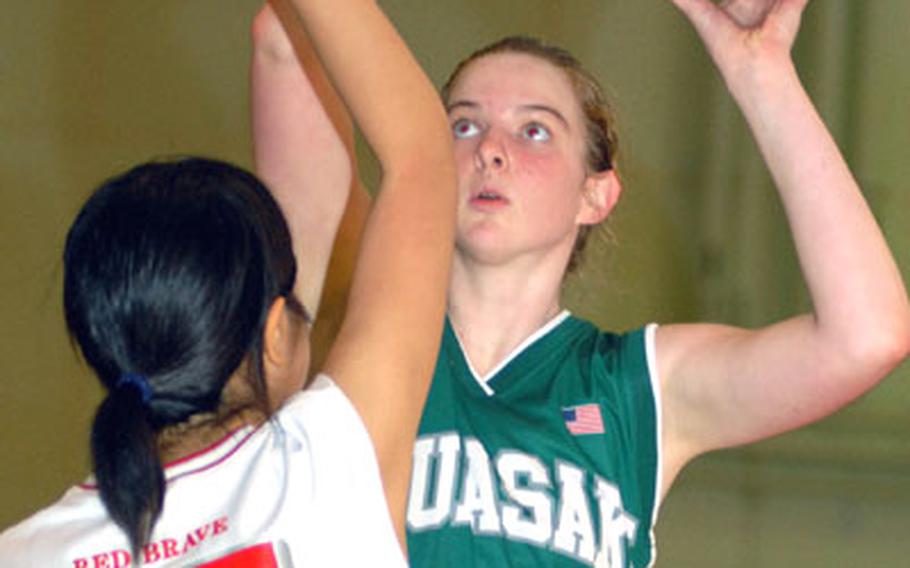 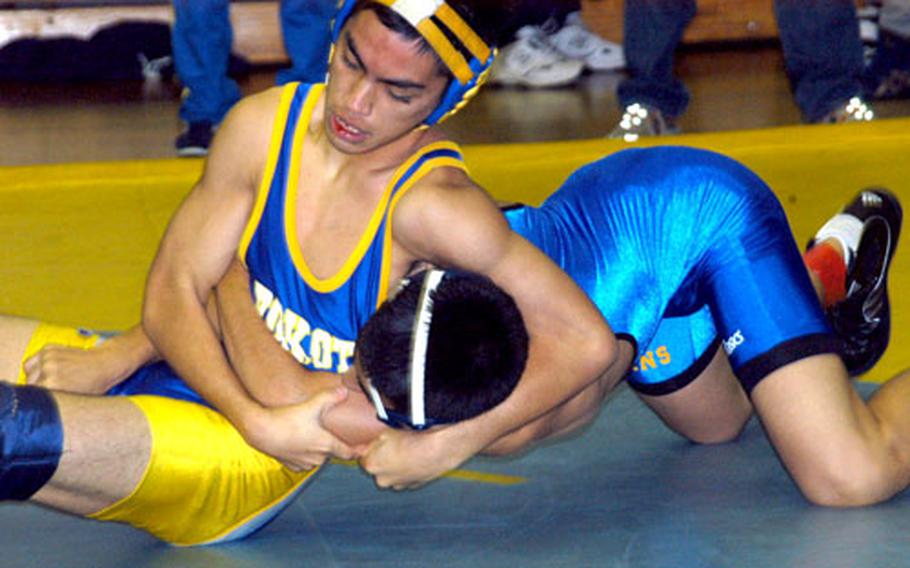 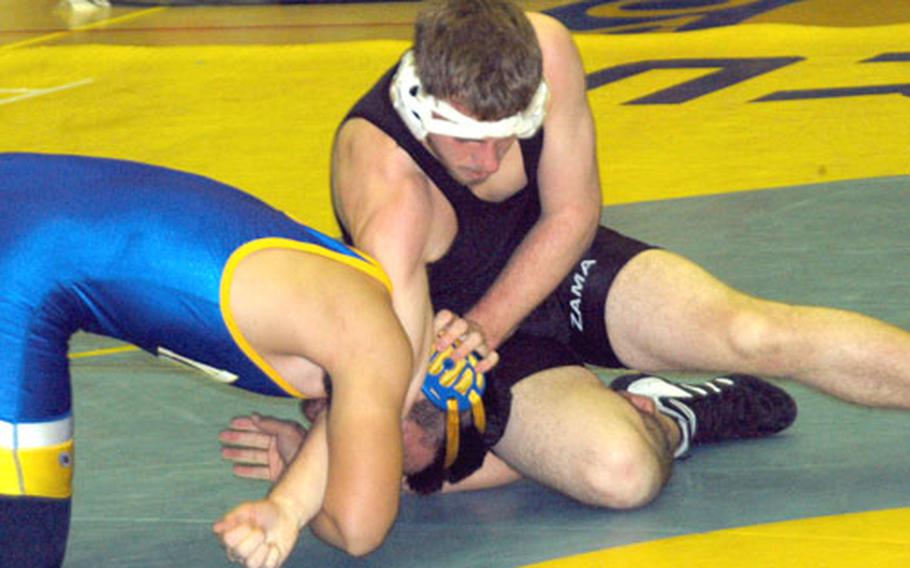 Yokota&#39;s Kyle Shimabukuro, left, tangles with Tim Campbell of Zama in the semifinals of the 180-pound division during Saturday&#39;s Kanto Plain Invitational. Shimabukuro emerged with the win on points. (Vince Little / S&S) 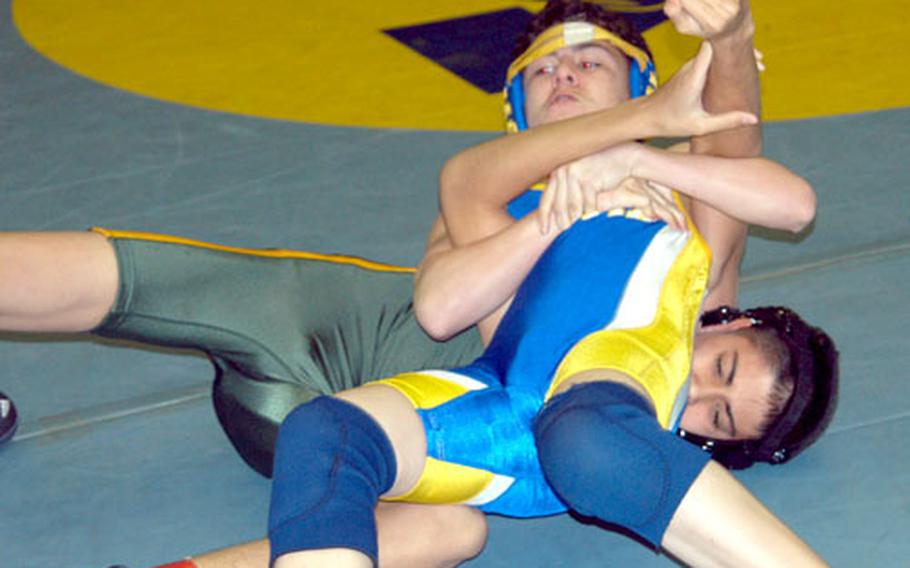 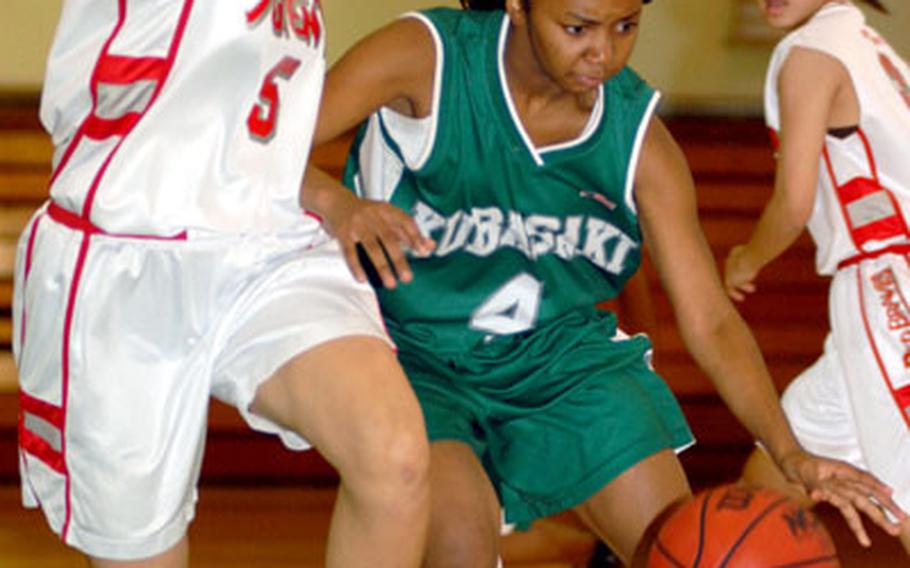 After two seasons of living in other players&#8217; shadows, Seoul American junior Andrew Luna has begun asserting himself as the Falcons&#8217; go-to guy.

Though 6-foot-1 and 185 pounds, Luna &#8220;plays a lot bigger than that,&#8221; Boyd said, adding that the Falcons are trying him in different spots to better round his game and avoid opponents&#8217; double-teaming him. Luna was averaging 18 points and 11.8 rebounds entering the weekend.

Coach Jon Fick admonished his players before Saturday&#8217;s game to get back on transition defense and take better care of the basketball; the Dragons committed 41 turnovers against Mirai Koka, and just 21 against Konan.

Kadena&#8217;s boys pulled away from Futenma on Friday for an 85-77 road victory, only to suffer a 100-66 defeat at Kitanakagusuku on Saturday.

No gold medals, but Yokota wins Kanto wrestling tourneyIt&#8217;s rare for a wrestling team to win a team title in a tournament without capturing any individual gold medals.

Yokota accomplished that feat Saturday on its home mat, outscoring St. Mary&#8217;s International 50-42 in the Kanto Plain Association of Secondary Schools Invitational despite the Panthers&#8217; not winning a gold. The Titans won four. The Panthers placed nine wrestlers in weight-class finals; each won a silver medal.

Saturday&#8217;s tournament was the first of the Japan season featuring DODDS-Japan teams and their international school counterparts, a much different lineup than in last week&#8217;s DODDS-Japan event at Edgren.

E.J. King girls improve to 10-0Defense continued to dictate the terms to opponents as the E.J. King girls basketball team improved to 10-0 &#8212; its best-ever record from the start of a season &#8212;by beating Zama American 50-29 on Saturday.