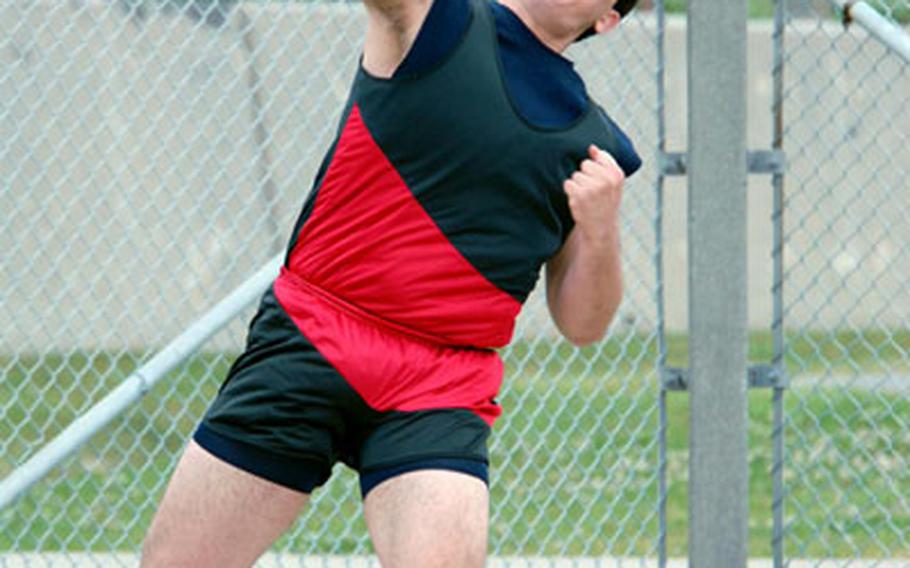 Another Mike Petty meet, another assault on the meet&#8217;s record book.

On his first attempt on a cloudy, windy, misty afternoon, Lieberg fouled. He followed that with two throws, with the 12-pound shot reaching the outer edge of the 14&#189;-meter sand pit.

Lieberg credits support from his coaches and family, hard work, viewing videos online and reading books on technique for his improvement.

As for Quallio, the question is how fast he&#8217;ll eventually run.

The junior clocked a 9:58.95. topping the four-year-old meet record by 21.05 seconds. Quallio lowered his personal best by seven seconds, broke Zama&#8217;s school record and became the third runner in Japan to run the two-mile in less than 10 minutes.

In Friday&#8217;s run, Quallio trailed Guam island cross-country champion Christopher Magtoto the first four laps, then took command on the fifth lap and pulled away to an 18-second triumph.

Seoul Track Club was one of two teams to win two events on the first day of competition.

The senior right-hander tossed a no-hitter and struck out 16 batters as the Falcons&#8217; baseball team routed Daegu American 16-1 under a sunny sky with the temperature in the 60s at Yongsan Garrison&#8217;s Lombardo Field FourPlex.

Heckerl &#8220;was truly dominant, consistently pounding the zone with his fastball, curve and knuckle-change,&#8221; said his coach and father, Robert Heckerl. &#8220;He struck out the first nine batters he faced, and we knew that if our bats stayed strong, we&#8217;d be in good shape.&#8221;

&#8220;We have a good core of veterans, five seniors, four who&#8217;ve played all four years here. We have a nice nucleus, and they know the system,&#8221; Falcons coach Julian Harden said.