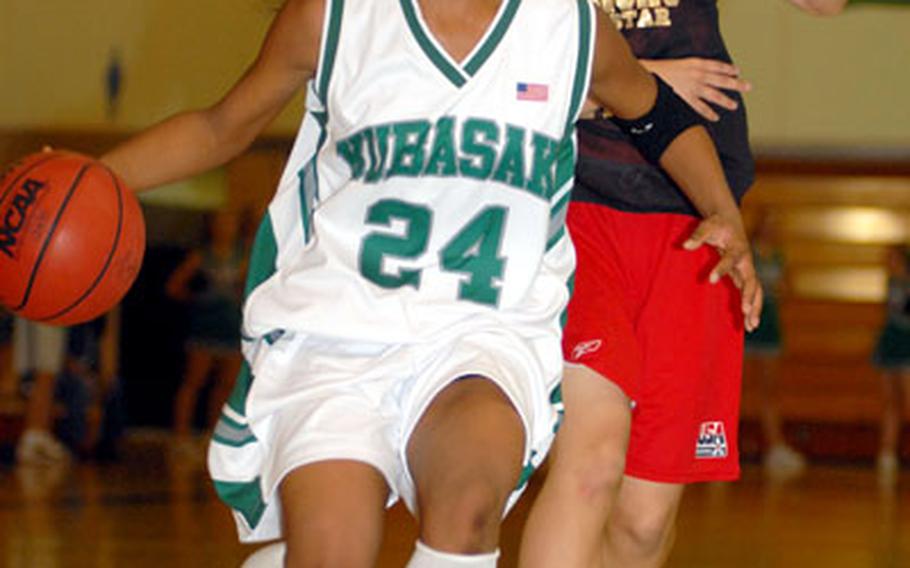 Class AA basketball teams had their hands full with their Class A opponents Friday as the DODDS-Japan league began its played its first full weekend of play.

E.J. King&#8217;s girls scored only their second victory over Zama American since the 1997 season, Zama&#8217;s boys prevailed in a shootout against the Cobras&#8217; boys and Yokota&#8217;s boys and girls needed late fourth-quarter rallies to escape with victories over Matthew C. Perry at Iwakuni Marine Corps Air Station.

&#8220;The girls were aggressive, they were rebounding and that was their best defensive game of the season.&#8221;

Vertin said she knew at the start of the season she&#8217;d get scoring from junior guard Kristia Suriben (18 points) and senior forward Yudia Johnson (14), but defense, led by Suriben and her freshman sister Rizalina, has stepped up to become the Cobras&#8217; X-factor, Vertin said.

&#8220;The Suribens just cover the court,&#8221; she said of full-court pressure that forced the Trojans to shoot from the perimeter; Zama&#8217;s inside players were held to seven points.

Vertin stopped well short of suggesting her Cobras are a threat to win the Class A tournament title in February at Taegu, South Korea. Nor would she make comparisons to her previous two teams. &#8220;This is a different team this season,&#8221; she said.

Yokota&#8217;s boys coach Paul Ettl and girls coach Ric Cabral left little doubt Matthew C. Perry is a far more competitive program than the boys team that has combined to go 18-38 the past two seasons; the girls are 15-45 over the past two seasons.

Yokota&#8217;s girls similarly had their hands full until two Samurai starters fouled out and Cabral used a box-and-one defense on Perry guard Cristina Sindac, holding her to 10 points.

Zama&#8217;s boys used their height along with scoring from red-hot guard Wilberto Badillo (26 points, five three-pointers) and led the whole way over the Cobras, who suffered their first loss in eight games. But Trojans&#8217; coach Tom Allensworth praised his foes&#8217; persistence.

But the Dragons rallied, outscoring Urasoe Commercial High School 24-13 in the second quarter and coming away with an 87-74 home triumph.

&#8220;We&#8217;re starting to put the pieces together, starting to understand what defense is about,&#8221; said coach Bob Driggs, whose Dragons improved to 5-4, including a 4-2 ledge at the 37th Hong Kong International School Holiday Tournament last month.