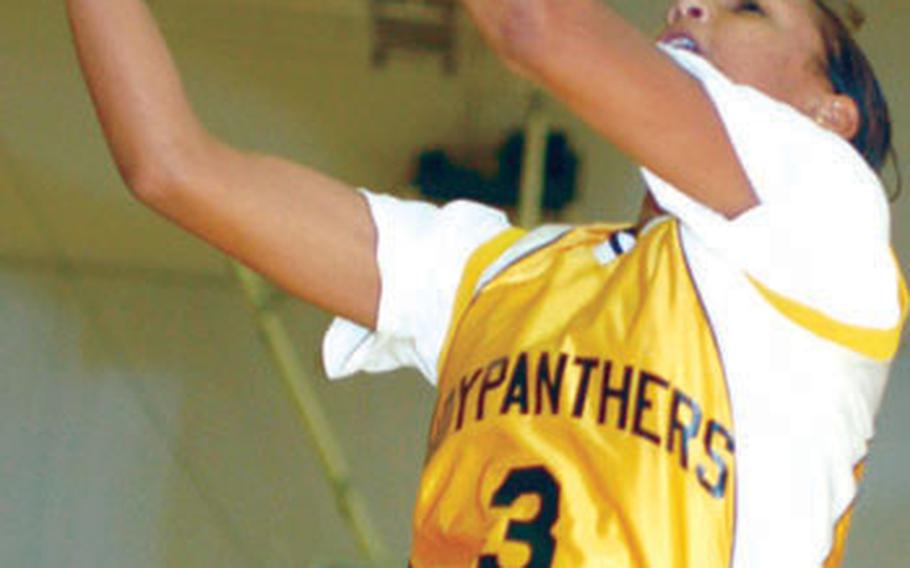 KADENA AIR BASE, Okinawa &#8212; Call this the year of starting over as far as many Pacific high school girls basketball teams are concerned.

Of the 12 DODDS-Pacific and DDESS-Guam schools, just five return three or more players.

Across the board, coaches are suggesting that their programs are a year from emulating the many contenders that dotted the map last season.

The changing of the guard begins at the top of the Class AA heap, where for the first time since 2002, Ken Hudson will not be coaching two-time defending Far East champion Kadena.

That role falls to Dewayne Pigge&#8217;, for the past six years an assistant to boys coach Robert Bliss.

Pigge&#8217; inherits three returners &#8212; and serious expectations, as the Panthers have won three of the past six Class AA titles.

"He has a resume behind him," Pigge&#8217; said of Hudson, who stepped down after last season but consulted with and gave pointers to Pigge&#8217; about the team.

"The girls are working hard, learning to feed off the experience that&#8217;s on the court. The newcomers seem to be jelling with the veterans and coming together as a team. We have to take it one step at a time."

He&#8217;s far from the only new face dealing with cobbling together a team loaded with fresh faces.

For the first time in 23 years, Charlotte Hicks is not coaching Seoul American.

The departure of Kristia and Riza Suriben and Samantha and Nicole Bossert leaves E.J. King second-year coach Michael Seitz with a handful of freshmen and sophomores &#8212; six players total.

Still, not everyone is in dire straits.

With sophomores Shannon Jackson in the paint and Deana Hardison bombing away on the perimeter, Nile C. Kinnick should also be a force in DODDS-Japan and Kanto Plain.

Daegu American appears young on paper, but even 6-foot-1 sophomore Kristina Bergman has much playing time.

Along with junior Jamie Cheniault and senior Olivia Buford, the Warriors might surprise some people, coach Michelle Chandler says.

Osan American&#8217;s fortunes will revolve around guard play, and they have a proven leader in Celine Baldevia, who helped the Cougars win their second straight Class A volleyball tournament title earlier this month.

Robert D. Edgren, perennially rebuilding, got some welcome news via the PCS plane, including junior Jessica Bergman and freshman Imani Wimbush, who has shown inside strength for an Eagles team that&#8217;s 3-1.

For his part, Pigge&#8217; set a course for the Panthers to be strong defensively and has installed several zone defenses that he hopes will be key to their fortunes.

Guam High PanthersAgana Heights2007-08 record&#8212;6-15, 4-10 Interscholastic Basketball League.Coach&#8212;Yvonne Tyrrell, first season.Key returners&#8212;Carmina Sheaks, Jr., F-C; Ashley Cosey, So., G; Stephanie Posadas, So., G.Outlook&#8212;Rebuilding. Panthers could be a year away from being an IGBL and Class AA contender if they&#8217;re able to keep people for more than a couple of years at a time.