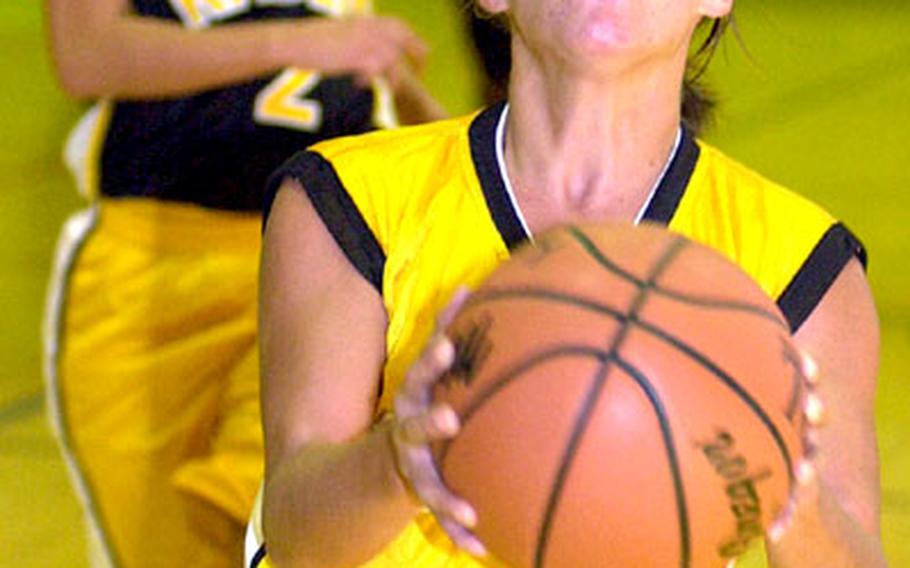 Kadena guard Dianne Abel, one of five Panthers seniors, goes up for a shot during an intrasquad scrimmage at Kadena Air Base, Okinawa. (Dave Ornauer / S&S)

The cheering barely had subsided at Falcon Gym on Feb. 26 when a grim reality began to set in for Seoul American girls basketball coach Charlotte Hicks.

After 19 years of trying, she&#8217;d finally captured a Far East Class AA crown &#8212; and on her home court to boot. But that championship also marked the last game for her two cornerstone players, point guard Amy Bakameyer and MVP Janel Daniels.

Fast-forward to early December, when Hicks and the Falcons hit the court having cobbled together enough parts &#8212; including the region&#8217;s tallest player, Margaret Nurse &#8212; to replace the departed stars, make a run at another Korean-American Interscholastic Activities Conference title and possibly back-to-back Class AA titles.

For starters, no amount of new players can replace the attitude and passion that Daniels and Bakameyer brought to the table, Hicks said.

It doesn&#8217;t hurt that Hicks acquired Nurse, a 6-foot-5 center, via transfer from Osan American, where she helped lead the Cougars to three Class A tournament Center Court appearances, including a championship last Feb. 25 at Pusan, South Korea.

Having Nurse, sophomore Avianca Manning and freshman Taqavia Randolph gives Hicks &#8220;a nice, tall team ... the height that I did not have last year.&#8221; Senior Germany Tillman and sophomore Angye Law can score anywhere on the court; senior Whitney Grandy takes over at point.

The Falcons&#8217; schedule will be tough, with regular-season games against Taegu American expected to be close. Seoul American also will play Korean high school teams that run and gun. And the Falcons have entered the Yongsan Pacificwide Holiday Tournament for military teams starting Dec. 14 at Collier Field House on Yongsan Garrison&#8217;s South Post.

Having captured the school&#8217;s second Class AA championship, Hicks is all too aware the Falcons will carry the bull&#8217;s-eye on their backs entering Far East in two months.

Runner-up Nile C. Kinnick of Japan wields a strong starting five and could contend, as might Kadena of Okinawa, fourth place a year ago but with five returning seniors and junior transfer Zori Drew from Hawaii. Yokota and Zama American of Japan are building but will pose problems for any opponent, especially Zama with All-Class AA senior center Tiffani Wright.

Outlook: Rebuilding. Although Wright brings a dominating presence underneath and Shicks a solid offense force and on-court leaders, there&#8217;s not a whole lot around them.

Outlook: Rebuilding. Guard-oriented team. Pressure defense and how quickly younger players develop will dictate how season goes. Panthers will learn from one of the best; Cabral is a former three-time All-Air Force guard.

Outlook: Contending. Sharp dropoff in experience level from starting five to bench, but Falk feels his youngsters will improve over the season, while his front-line players can still chase the Kanto, JBL and Class AA crowns.

Outlook: Reloading/contending. Falcons have the biggest player in the region, still have the Class AA homecourt advantage and have acquired enough parts to replace graduated senior stars Janel Daniels and Amy Bakameyer and make another KAIAC and Class AA title run.