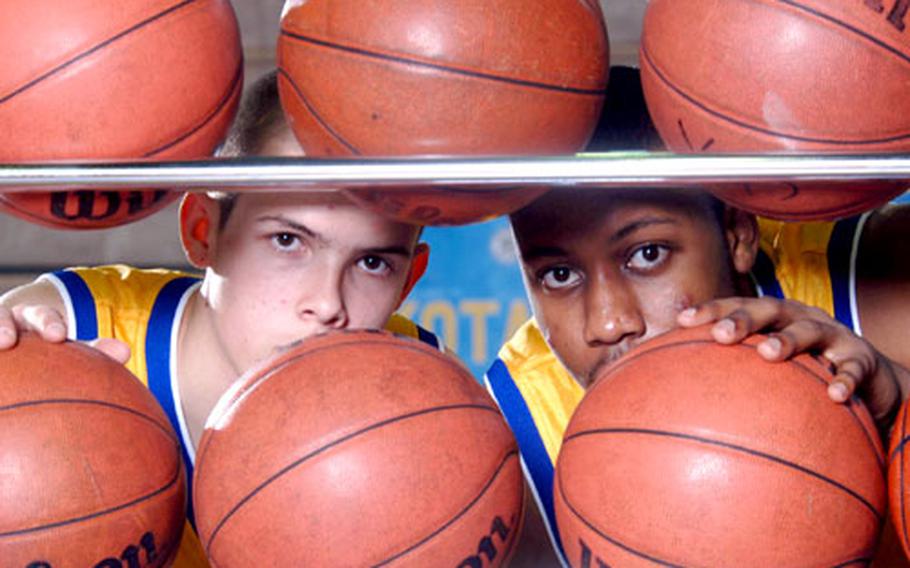 Players coming and going and the consequent constant need to rebuild teams is a way of life for Department of Defense Dependents Schools basketball coaches.

But some players may seem less easy to replace &#8212; such as junior forward Z&#8217;aire Jackson, who regularly totalled 30-plus points and 20-plus rebounds in pacing the Kadena Panthers to a Far East Class AA tournament title last year. Or Marcus Carson, who almost averaged a triple-double in pacing the Kubasaki Dragons to a fourth-place finish.

But Carson graduated and Jackson transferred to play his senior year in Alabama.

How do coaches Chris Sullivan of Kubasaki and Bob Bliss of Kadena replace such standouts?

&#8220;That will be our challenge,&#8221; said Sullivan, whose Dragons will have three inside players 6 feet 3 or taller but who also must break in a new point guard.

Bliss said he believes this year&#8217;s team carries better balance, from the starting five to the 12th man off the bench.

Varsity holdovers Anthony Soroka will start at point and Brandon Rice in the post. They&#8217;re joined by Marquis Newton, Alex Mierzejewski and Tony Watkins, who moved up from the junior varsity team.

Though not yet battle-tested, &#8220;you can develop experience as a season wears on. We have a good schedule,&#8221; Bliss said of a ledger that includes at least 12 games against Japanese teams, plus a four-game season series with always-tough Kubasaki.

Sullivan said he&#8217;ll begin the season with sophomore Michael Bennett running the point: &#8220;He has the same quickness Marcus had, just doesn&#8217;t have the experience.&#8221;

Bennett&#8217;s main responsibility certainly will be to get the ball inside to Sullivan&#8217;s tri-towers of 6-3 sophomore Tommy Fair and 6-3 senior Vance Maxey, who each transferred in, and 6-5 senior Stephen Thompson, who&#8217;s coming off a football ankle injury.

But the Okinawa powers hardly are alone in hanging the &#8220;Help wanted; inquire within&#8221; shingle outside the coach&#8217;s office:

Outlook: Contending, if, Ettl says, &#8220;it all falls together.&#8221; Panthers must replace graduated point guard Shawn Novak; that&#8217;s &#8220;a work in progress,&#8221; according to Ettl. Plenty of experience but some of it in players coming in from elsewhere, and new players must meld with the core of five returning veterans.

Outlook: Rebuilding/reloading. Good core of returnees and true post presence in Neal, Motohashi has come out &#8220;on a mission,&#8221; Brewster says, but Red Devils must overcome loss of graduated Leonard Lynce and others who transferred.

Outlook: Rebuilding. A bit more athletic than last year&#39;s team, which should stay in most games, Allensworth says, if Trojans play good defense. But this team hasn&#39;t had true go-to scoring weapon since Corey Stacy two seasons ago.

Outlook: Contending for KAIAC title, possibly in Class AA. Smallest team in terms of height that Boyd has had at the Falcons&#39; helm. Question is how quickly Falcons can become the full-court press-and-transition up-tempo team Boyd is trying to mold.

Outlook: Rebuilding/reloading. How will Bliss replace departed comes-along-once-in-10-years Class AA MVP Z&#8217;aire Jackson, who transferred to Alabama? Underclass guards Darnell Womach and Jacob Love also left, as did post force Gary Wright. There are enough parts there to mold a contender but it may take time and losing Jackson may be too much to overcome.