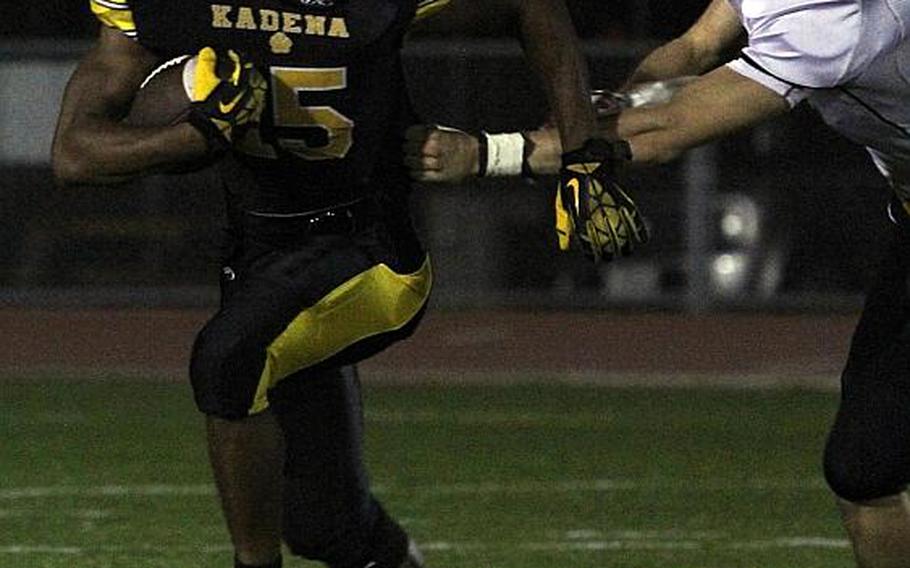 Kadena running back Jason Bland ran for two touchdowns against ASIJ to boost the Panthers back to the D-I title game. (Marie Obsuna/Special to Stars and Stripes)

Kadena running back Jason Bland ran for two touchdowns against ASIJ to boost the Panthers back to the D-I title game. (Marie Obsuna/Special to Stars and Stripes) 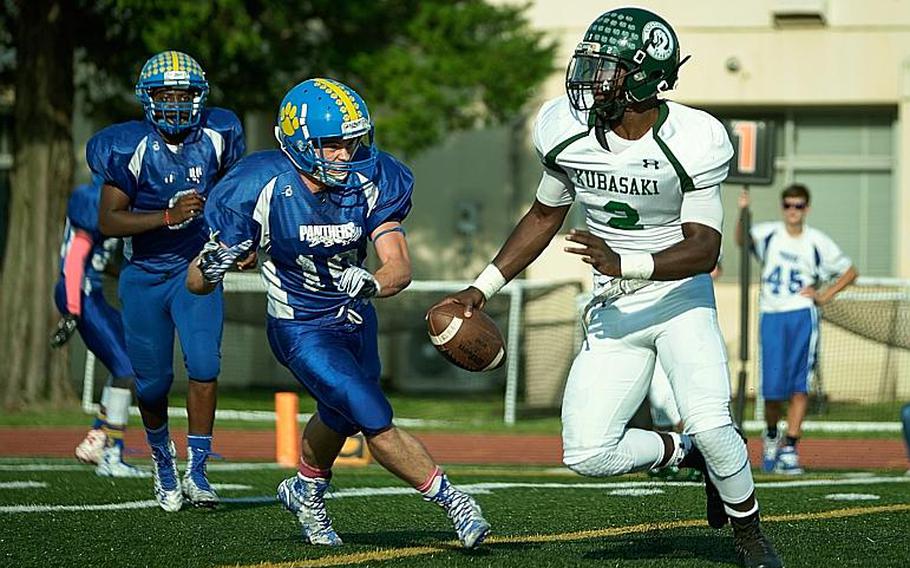 Kubasaki quarterback Isaiah Johnson led a balanced Dragons offense to a 27-13 win over host Yokota on Oct. 3, 2015 in Tokyo. (James Kimber/Stars and Stripes) Daegu quarterback DeAndre Rosalie dashes past the Matthew C. Perry defense for one of his three rushing TDs. (Dave Ornauer/Stars and Stripes)

One pair of opponents have faced each other so many times the last three seasons, they might be seeing each other in their sleep. The other pair are as unfamiliar as distant relatives brought around the globe to meet each other for the first time.

Those are the scenarios entering Saturday’s Far East Divisions I and II championship games.

Kadena and Kubasaki of Okinawa face each other for the third straight year for the D-I title at 4 p.m., while Yokota – in its first year as a small-school’s team – travels to two-time defending champion Daegu for a 7 p.m. kickoff in an historic first meeting of the two teams.

Both games are slated to air on AFN radio and AFN 360 on the Internet.

It will be the 11th time in the 11 years of Far East playoffs that one Okinawa team or the other will be playing for the Division I title, in this case both for the third consecutive year.

“We have a lot of respect for them,” Dragons coach Fred Bales said. “They’re an excellent team. They put a great product on the field, and not just by accident. They play hard with spirit and determination, as do we. It’s a tremendous opportunity, a tremendous challenge.”

Kadena is the defending champion, a 41-27 winner over Kubasaki last Nov. 8, while the Dragons edged the Panthers 34-31 in overtime for the 2013 championship. They’ve played each other 10 times the last three seasons, a 5-5 split with the Dragons barely outscoring the Panthers 24.5 to 23.2 points per game.

The Dragons (6-1) and Panthers (5-2) have led the Pacific in scoring defense respectively the last two seasons, Kadena allowing 10.3 points in eight games in 2014 and Kubasaki 13.6 this season.

Key to the Panthers’ fortunes will be a running game featuring D-I’s leading rusher, Jason Bland, 1,464 yards and 17 touchdowns on 193 carries. Countering for the Dragons is the Pacific’s total offense leader, quarterback Isaiah Johnson, 1,800 yards and 18 touchdowns.

So how do teams that are so familiar with each other’s styles try to keep the other off balance? “You’re not going in with the same things you’ve been doing before,” Mendoza said. “You have to change things up.”

That’s not so much an issue for Daegu and Yokota, each very explosive on offense. The Panthers (7-1) led the Pacific in scoring offense this season with 45.9 points per game, while the Warriors averaged 42.3 points per game in three outings with D-II opponents.

“They’re a multitalented team, a proven winner based on their record,” Daegu coach Phillip Loyd said of Yokota, the DODDS Japan and Kanto Plain champion that played three of eight games against D-I opponents. “We have our work cut out for us.”

The Panthers do hold one edge: Coach Tim Pujol had a chance to see the Warriors face off against Matthew C. Perry last weekend.

But that was little comfort, Pujol said.

It could easily become a battle of senior quarterbacks, each of whom are as adept throwing as they are running.

Marcus Henagan has amassed 1,210 yards and 18 touchdowns on offense for Yokota, while Daegu’s DeAndre Rosalie counters with 1,004 yards and 13 touchdowns. He and senior running back Josh McCaw became the third pair of backs to rush for 200 yards in a game in DODDS Pacific history last Saturday against Perry.

“The key is to limit the big-play touchdowns, but that’s going to be easier said than done,” Pujol said.

Perry is a common opponent for the two teams; Yokota beat the Samurai 55-7 and 35-14 during the 2015 season. Perry coach Frank Macias said each team might have serious trouble stopping one another offensively.

“They’re both very physical, they have some hammers on both teams,” Macias said. “Whoever wins the battle of the trenches, that’s who will win the game.”