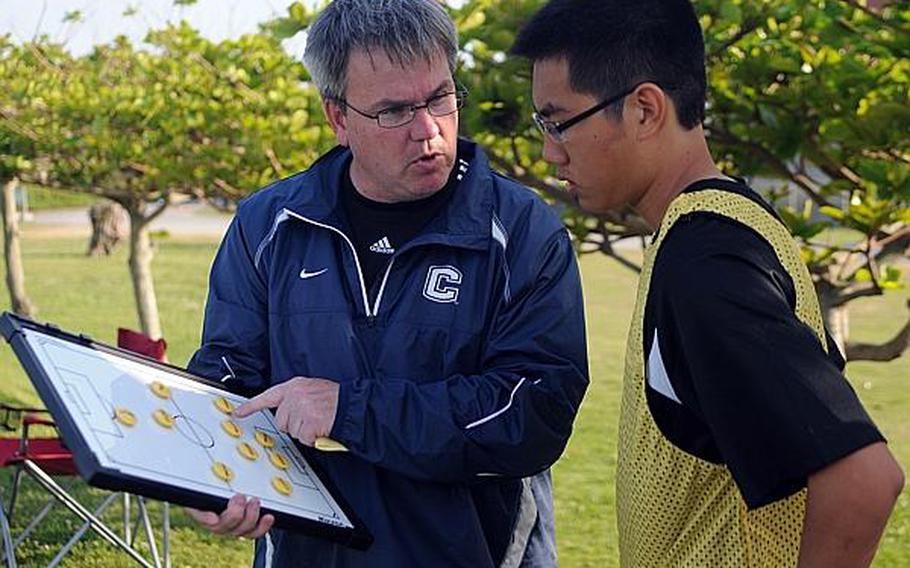 YOMITAN, Okinawa – Mike Callahan relished a return to the soccer sideline. Nelson Youngblood needed a “tactician,” somebody who could help coach the technical aspects of the game in preparation for next month’s Far East Division I Tournament.

Call it a match made in Kadena Panthers boys soccer heaven. Callahan, who took three Kadena teams to Far East D-I finals, winning one, in the last 12 years, is back with the program as a volunteer coach on Youngblood’s staff. And each is grateful for the return.

“I needed a tactician, and I needed the best I could get” with Kadena playing 17 matches in four weeks before Far East, said Youngblood, in his second year as the team’s sponsor. “I’m glad to have him on board.”

For his part, Callahan couldn’t be happier. “It’s a lot of fun. I’m having a good time,” he said.

Pairing with former All-Air Force coach John Reay, Callahan coached the Panthers to the 2006 Far East D-I title, a 3-0 finals win over Kubasaki at Yokota best remembered for a calculated gamble by Callahan.

He moved striker Nathan LaGrave to sweeper, sacrificing scoring for defense, and the move paid off.

Callahan also led the Panthers to the finals in 2005 at Yokota, where they lost in overtime 2-1 to Christian Academy Japan – the first time a non-Okinawa team won the title – and in 2001, when the Panthers lost to Kubasaki 2-0 in frigid conditions at Misawa Air Base, Japan.

Callahan is an educator at Amelia Earhart Intermediate School on Kadena, and stepped aside as Kadena coach when Tom McKinney, a physical education instructor and Kadena High School cross-country coach, applied for and got the soccer post.

Callahan’s return also means coaching his son, junior striker Yuji Callahan, who’s been playing soccer virtually since he could walk and attended and played soccer at a Japanese school in Kyushu.

Perry features a player in Yuji Callahan’s mold, Gaku Lange. The son of Samurai coach Mark Lange has played in Japan’s J-League Hiroshima Sanfrecce’s youth development program since his childhood days. Yuji leads Kadena with five goals; Gaku paces his team and the Pacific with 31, but in five times as many matches.

Callahan refers to Gaku and Yuji as “identical soccer twins.”

“It will be nice to meet somebody who understands the Japanese game,” the elder Callahan said. “It should be a lot of fun.”

Elsewhere in the Pacific, this weekend will be a homecoming of sorts for sophomore right-hander Leo Austin, who led Robert D. Edgren to the Far East D-II Baseball Tournament title and earned MVP honors before transferring to Yokota over the summer. Yokota plays at Edgren on Friday and Saturday.

All four track leagues will be in action for the first time this weekend, the next-to-last regular-season meets before the April 30 deadline for qualifying for next month’s Far East meet at Yokota.

This is also the last regular-season weekend in the Korean-American Interscholastic Activities Conference soccer season, with the top seed in the boys Five-Cities Division still up in the air.

Seoul Foreign has already clinched the girls top seed in the KAIAC tournament for the fifth straight year and eighth time in nine years.