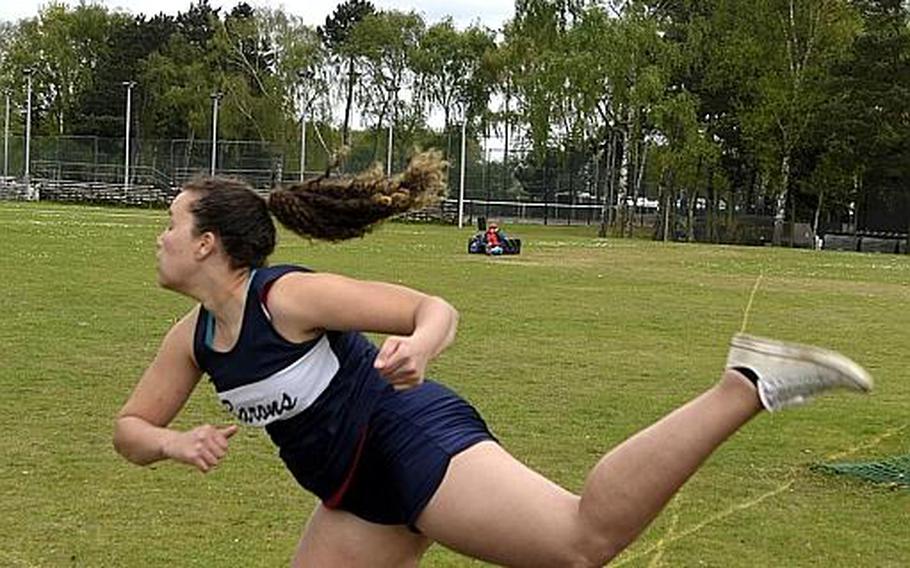 Bitburg's Elise Rasmussen throws a discus just more than 100 feet during the opening track and field meet of the season at RAF Lakenheath, England, Saturday, April 15, 2017. She out threw the boys with her qualifying discus toss. WILLIAM HOWARD/STARS AND STRIPES ()

Bitburg's Elise Rasmussen throws a discus just more than 100 feet during the opening track and field meet of the season at RAF Lakenheath, England, Saturday, April 15, 2017. She out threw the boys with her qualifying discus toss. WILLIAM HOWARD/STARS AND STRIPES () 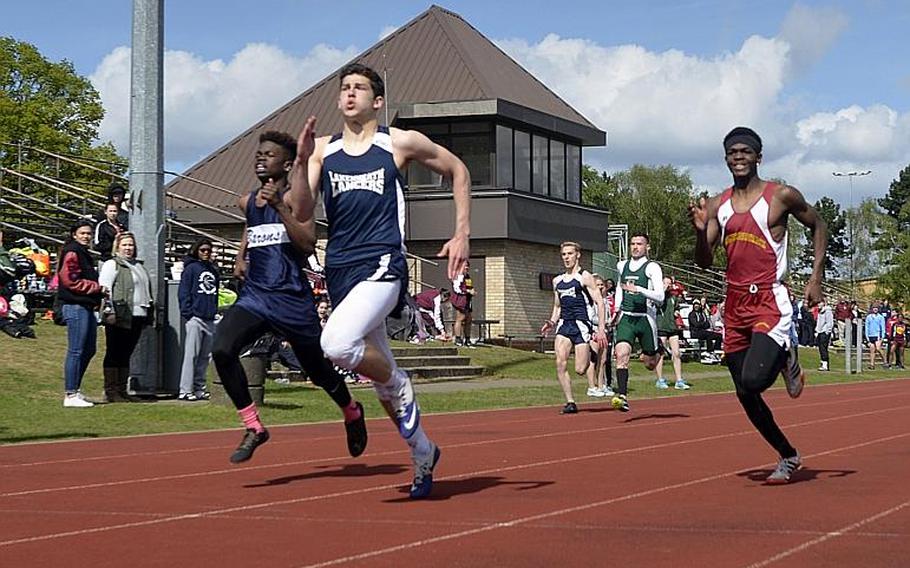 Track athletes sprint to the finish line during the 800 meter run at the opening track and field meet of the season at RAF Lakenheath, England, Saturday, April 15, 2017. WILLIAM HOWARD/STARS AND STRIPES ()

The forecast calls for sun in Kaiserslautern, Germany, this weekend, which is welcome news to the athletes, coaches, administrators and fans of the DODEA-Europe track and field community.

The 2017 DODEA-Europe track and field championships are to be held Friday and Saturday at Kaiserslautern High School, a year after the 2016 edition of the event was plagued by inclement weather and ultimately canceled with a few events left unfinished on the agenda. Elite young runners, leapers and throwers were reduced to ducking under shelter, standing idly by for updates and staring forlornly at the pools of water steadily collecting on the track.

Girls Two historically dominant girls athletes will be in action this weekend.

Junior Jada Branch, the reigning Stars and Stripes track and field Athlete of the Year, returns as the centerpiece of the hometown Kaiserslautern Raiders. Branch secured wins in the triple jump, long jump and 300-meter hurdles last spring and figures to add to her growing trophy case this weekend.

Bitburg’s Elise Rasmussen, meanwhile, is set to complete her long-standing dominance of the strength events in her final DODEA-Europe meet. The Baron senior is the favorite in both the shot put and discus after she won both events in 2016.

While Branch and Rasmussen are the clear standards in their chosen areas of expertise, other events might offer closer finishes.

Vicenza’s Brandy James is the frontrunner to claim the mantle of Europe’s fastest after repeatedly breaking the 13-second mark in the 100-meter dash this spring. But James will have ample competition for the honor, including returning runner-up Yhari Dupree of Ramstein.

Boys Vilseck’s Zavier Scott appears ready to step in as the organization’s speedy standard-bearer. Scott finished fourth in the 100-meter dash a year ago but has shaved valuable digits off his time in the interim and is a threat at 100, 200 and 400 meters.

Ansbach’s Joxua Baughman is the heir apparent to win the discus after taking second in the event last spring. The versatile Cougar will also compete in the shot put, long jump and triple jump.

Lakenheath’s Austin Burt has made a leap onto the shortlist of contenders to win the distance running events. Burt impressed last year with a third-place showing at 1,600 meters.

Baumholder’s Nathaniel Horton is the favorite to repeat as the European champion in the long jump. Horton is also slated to contend in the high jump, 200 meters and 400 meters.