Everyone's out to topple Ramstein or Sigonella 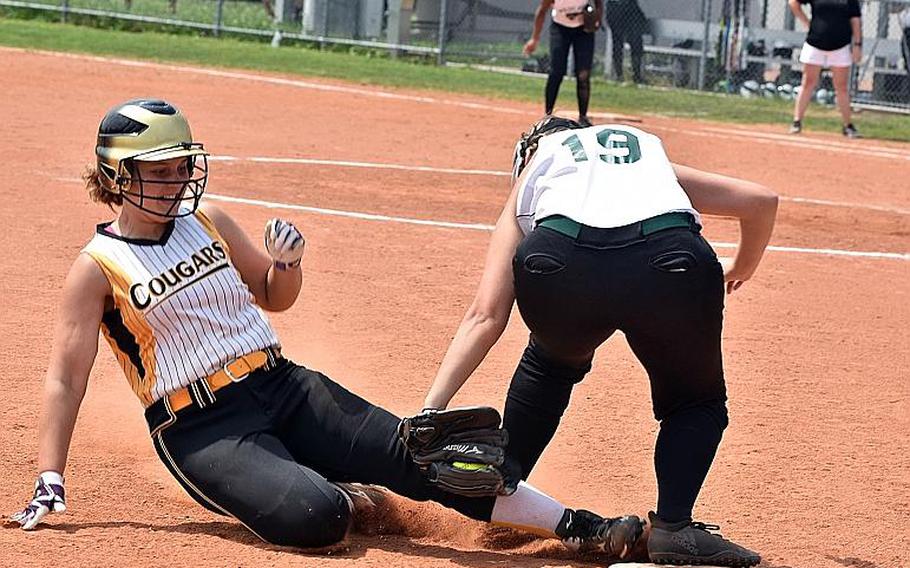 Vicenza's Bethany Williams is tagged out by Naples' Emily Kras at third base on Friday, May 11, 2018. (Kent Harris/Stars and Stripes)

Vicenza's Bethany Williams is tagged out by Naples' Emily Kras at third base on Friday, May 11, 2018. (Kent Harris/Stars and Stripes) 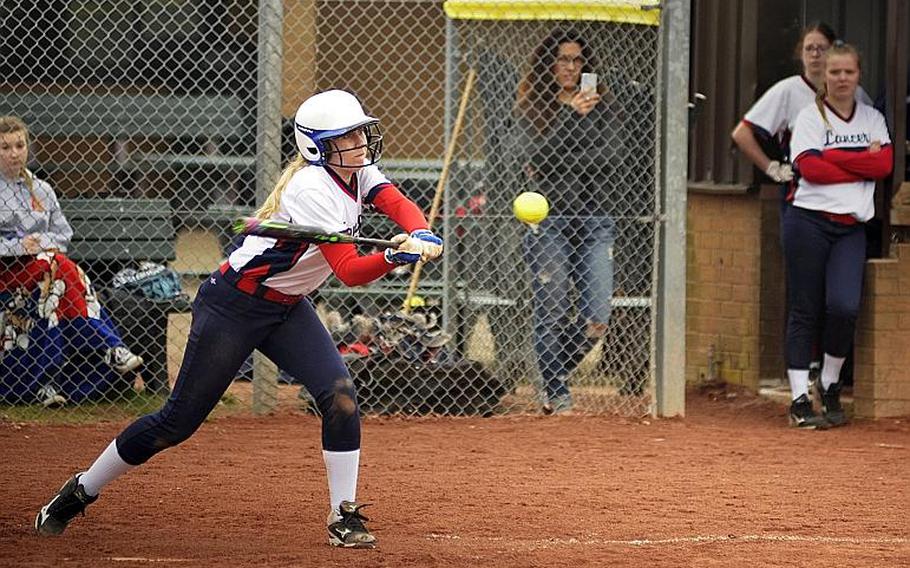 Lakenheath???s Paige Nielsen keeps her eye on the ball while batting against Spangdahlem during a doubleheader at RAF Lakenheath, England, Saturday, April 14, 2018. (William Howard/Stars and Stripes) 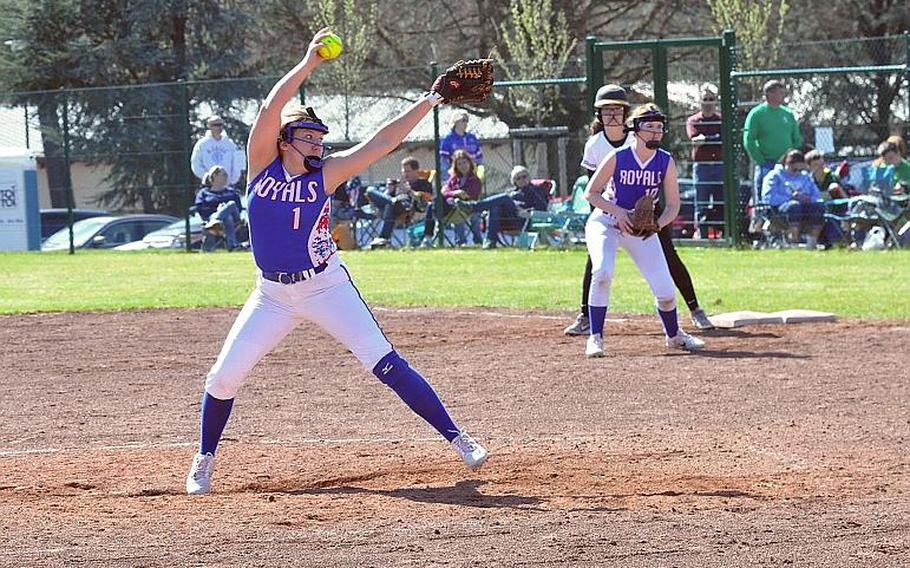 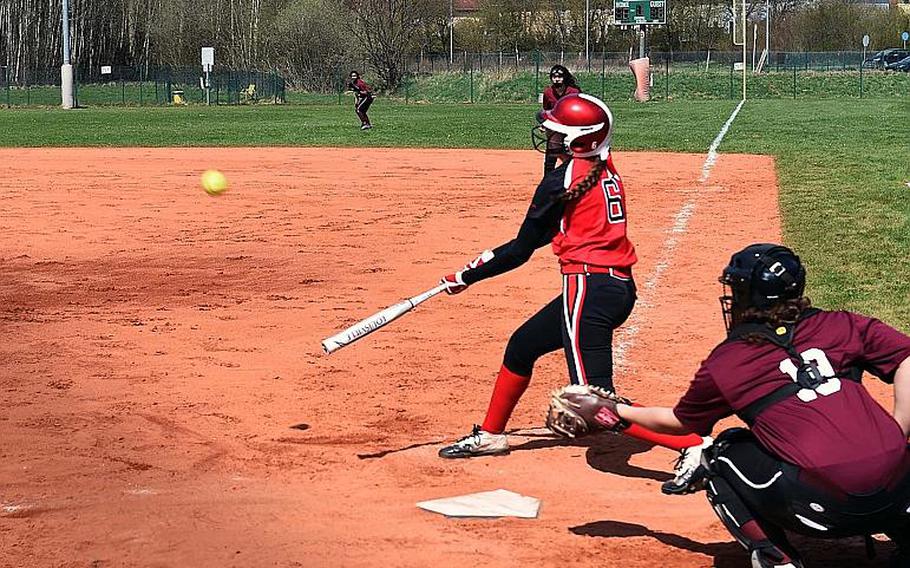 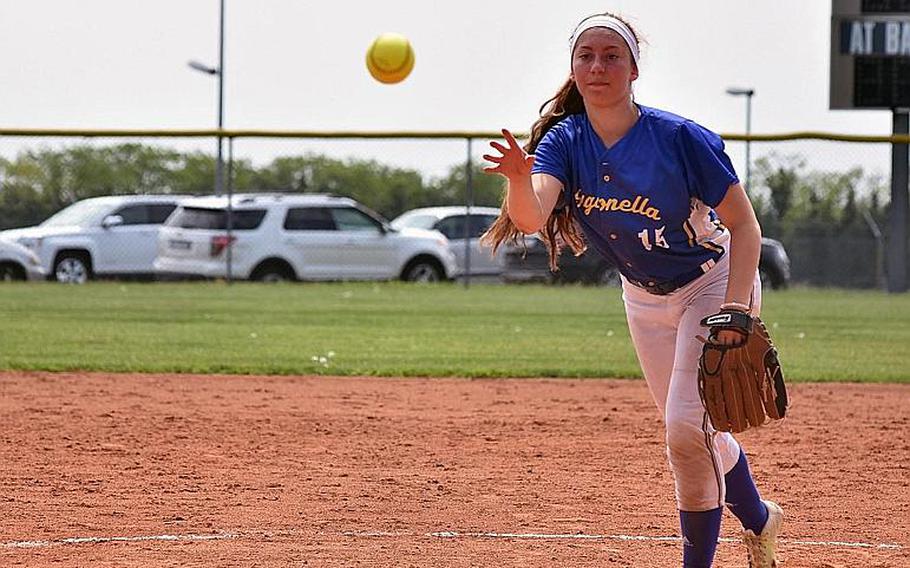 Sigonella's Jessica Jacobs tosses the ball toward home while throwing a no-hitter against Hohenfels on Saturday, April 28, 2018. The Jaguars won 10-0. (Kent Harris/Stars and Stripes)

Fourteen teams from around the continent will gather in the Kaiserslautern Military Community this week for the 2018 DODEA-Europe softball championship tournaments, running Thursday through Saturday at Ramstein Air Base and Kapaun Air Station in southwestern Germany.

Preliminary rounds will reduce the eight Division I teams and six Division II/III teams to four finalists for the Saturday afternoon finals, scheduled to run concurrently at 4:30 p.m. at Ramstein Air Base.

The defending champion Ramstein Royals and Sigonella Jaguars are contenders to repeat atop Division I and II/III, respectively, but each faces a hungry pack of contenders eager to take their place.

Division I Things were proceeding as planned for Ramstein until mid-May. Coming off one of the more dominant seasons in any DODEA-Europe sport, an undefeated title blitz capped by a 16-1 thrashing of the Stuttgart Panthers in the championship game, the Royals were again rampaging through the regular season en route to another likely crown.

That crown is still a possibility, but the Lakenheath Lancers and Kaiserslautern Raiders have called the Division I hierarchy into question.

Lakenheath beat the Royals 11-7 in the second half of a competitive doubleheader that started with a 5-1 Ramstein victory, ending the defending champions’ nine-game winning streak to start the season.

Kaiserslautern fared even better against Ramstein, sweeping the archrival Royals 12-7 and 13-8 on the final day of the regular season. That performance highlighted the Raiders’ rare mix of elite pitching, prolific offense and capacity for late-game execution, all of which should serve the perennial contender well as it readies another title chase.

Ramstein’s return to the Division I pack late in the regular season sets the stage for a competitive tournament devoid of easy outs.

Vilseck thrived in a tournament-like setting in Italy in late April, earning two wins apiece over Naples and Vicenza.

Stuttgart won three of four on its swing through Italy and played Kaiserslautern to a tough doubleheader split.

Wiesbaden opened its season with a sweep of Stuttgart and finished it with a split against Vilseck.

Naples and Vicenza have spent much of the spring locked into their ongoing rivalry against each other, with each coming away with wins.

The SHAPE Spartans were forced to disband this spring due to low roster size, leaving a round-number field of eight competing for four semifinal spots. As a highly competitive regular season proved, that will bring the seasons of some very worthy contenders to a premature end.

Division II/III The defending champion Sigonella Jaguars were a tier above their divisional competition throughout the spring. They’ll bring an overwhelming 13-1 divisional record into the tournament and seem to have a similar level of talent and poise as the team that beat the Bitburg Barons, now known as the Spangdahlem Sentinels, 9-5 in last year’s championship game.

The Rota Admirals are responsible for Sigonella’s only Division II/III loss this season, a close 3-2 decision on April 21, and they’ll bring a strong 8-4 divisional record into the postseason. The Aviano Saints, though they struggled otherwise throughout the spring, nearly handed Sigonella another one that same day before taking an 8-7 loss to the Jaguars.

For the Hohenfels Tigers and Alconbury Dragons, those figures serve as a hopeful counterbalance to the more ominous numbers of the Jaguars’ record. But the bracket’s round-robin format, which skips the semifinals and sends its top two finishers straight to Saturday’s championship game, minimizes the impact of a single preliminary victory and should generally benefit the tournament’s more talented teams. A decisive upset of the Jaguars, if it happens at all, will likely have to wait for the title game.