Baumholder&#39;s Artrell Davis tries to break away from Vicenza&#39;s Nicholas Williams during the third quarter of Baumholder&#39;s 34-18 win Saturday. Davis, a sophomore, led his team in rushing with 129 yards on 17 carries. (Ben Bloker / S&S)

Baumholder&#39;s Artrell Davis tries to break away from Vicenza&#39;s Nicholas Williams during the third quarter of Baumholder&#39;s 34-18 win Saturday. Davis, a sophomore, led his team in rushing with 129 yards on 17 carries. (Ben Bloker / S&S) 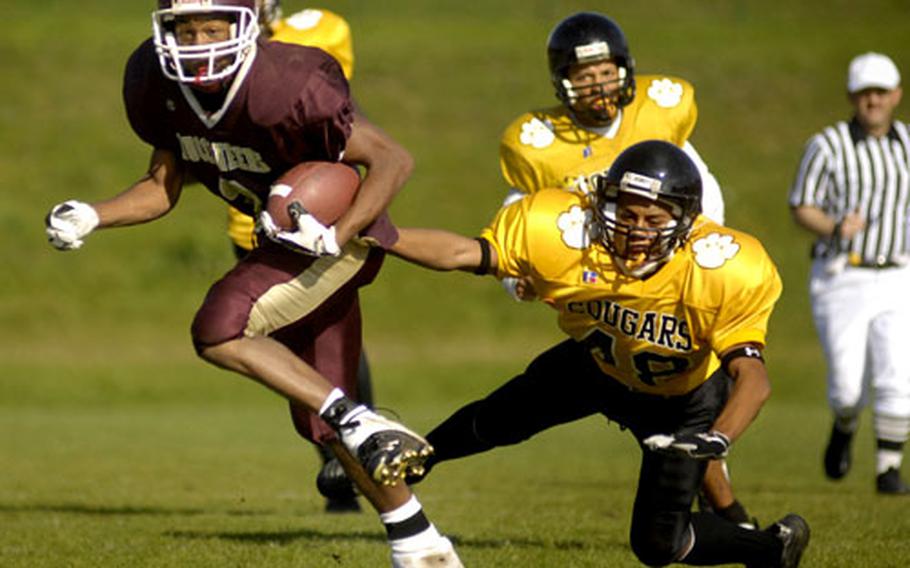 Baumholder&#39;s Fred Styles gets away from freshman Isaia Vimoto of Vicenza on his way to the end zone Saturday at Baumholder. Styles, a sophomore, scored twice, once on a run and once on a pass from LaCross Gray. (Ben Bloker / S&S) Diving for yards, Prince Owusu, a Baumholder freshman, is brought down by Vicenzad sophomore Napolian Myhand Saturday during the first quarter at Baumholder. After an impressive first half of rushing, Owusu moved to quarterback early in the second half after starter LaCross Gray left with an injury. (Ben Bloker / S&S)

Quarterback Michael Tillberg ran for two touchdowns and passed for two TDs Friday night as Hohenfels clinched at least a tie for the Division III-South crown with a 37-0 home victory over Bamberg.

Tillberg scored on runs of 1 and 10 yards and completed scoring passes of 28 and 22 yards to Colby Baskins for the Tigers (3-2 overall, 2-0 III-South).

Hohenfels also got 110 rushing yards and a 5-yard TD run from Dameon Odum.

According to Hohenfels coach Ed Lynch, the Tigers&#8217; defense recovered six fumbles, with Matt Thorne and Kayleb Harp each getting two. Thorne and Odum each posted sacks.

In Saturday games involving schools from Divisions III and IV:

Rota 48, Brussels 0: At Rota, Spain, the Admirals played seniors exclusively in the first quarter of their final home game of the regular season, according to Rota coach Robert Stovall.

They built a 27-0 lead behind three TDs and more than 100 rushing yards by Dan Inness in a nonconference game that Division IV Brussels (0-5) elected to end at halftime. [/BODY]

Jeff Shelton scored two touchdowns for Rota (4-1), the first coming on a 22-yard pass from Sterling Frost. The second was set up by a 63-yard run by Andrew Bankey.

The other TDs came on a 2-yard fumble return by Travis Apling and R.J. Curley&#8217;s 32-yard run. Kieta Silk ran his streak of consecutive PAT kicks to 12.

AFNORTH 50, Sigonella 13: At Brunssum, Netherlands, Frederick Leonard completed nine of 16 passes for 194 yards and four TDs as the Lions (5-0 overall, 2-0 III-North) tuned up for Saturday&#8217;s showdown against Rota.

Leonard connected with Kyle Higgins twice for scores[/BODY] and James Perea and Jack Telega once each. James Carrico returned an interception 47 yards for a TD, and running back Brock Blankenship, who rushed 12 times for 107 yards, and Kevin Kropp each ran for TDs.

Blankenship paced the Lion defense with 11 tackles, including two sacks, and recovered a fumble.

Baumholder 34, Vicenza 18: At Baumholder, LaCross Gray passed for two touchdowns and ran for a score as the Bucs (4-1) broke out to a 28-6 halftime lead and coasted.

T.J. Gray caught a TD pass and ran for a score in the first-half blitz. Fred Styles, who later scored on a 27-yard run, hauled in the other TD toss.

Miguel Rosario and Mickey Stoner ran for TDs for Vicenza (3-2), and Stoner completed a 75-yard pass to Matt Parrot with 1:26 to play for the final score.