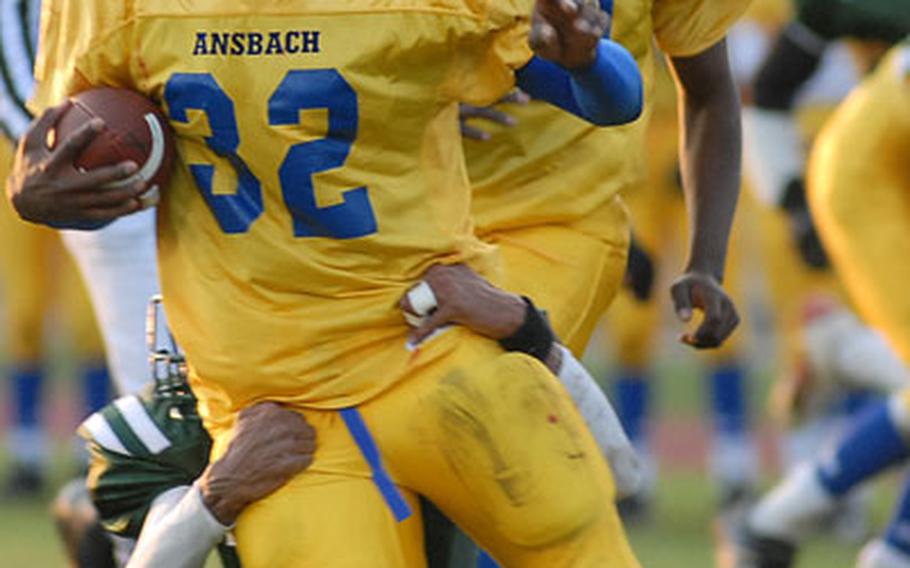 Scratch one uncertainty off the list for the coaches of DODDS-Europe&#8217;s Super Eight football teams when they convene Saturday at Baumholder&#8217;s Minnick Field to determine champions in four divisions.

Forecasts from USAFE&#8217;s 21st Operational Weather Squadron in Sembach, Germany, call for the late afternoon and evening showers that have drenched every previous title-day schedule in Baumholder. The coaches had already taken the Baumholder-in-November conditions into their thinking for this year&#8217;s championship quadrupleheader.

Another uncertainty &#8212; the opponents &#8212; was settled on Oct. 20 when Ansbach and Bitburg met. The nonconference game between teams that already had qualified for the D-II playoffs was little more than a schedule-filler when the slate was drawn up in August.

As it turned out, it completed an unusual season for DODDS-Europe&#8217;s far-flung schools, in which each finalist played a regular-season game against the team it will meet in Saturday&#8217;s championship game.

The title-game quadrupleheader begins and ends with the Rubber Match bowls, the third clashes of the season for teams that split their previous encounters &#8212; Hanau vs. Menwith Hill at 11 a.m. in the first nine-man Division IV title game, and Ramstein against Heidelberg at 5:45 p.m. for the D-I crown.

In between are the Rematch Bowls. Rota and Baumholder, which beat the Admirals 28-6 Sept. 15 in Spain, clash at 1:15 p.m. for the D-III title won last year by Ansbach, and Bitburg puts its D-II title on the line at 3:30 p.m. against Ansbach, which beat Bitburg 38-8 in their earlier meeting.

Baumholder&#8217;s Carter Hollenbeck said it is difficult to go 2-0 against a good team.

Heidelberg&#8217;s Sal Katz, whose team lost the conference championship game to Ramstein on the final play of the game last Saturday, would like less familiarity if given the choice.

With all the parameters of the other team in view, the game comes down to execution, said Katz.

Rota&#8217;s Stovall had another handicapping tip.

Incentive shouldn&#8217;t be a problem this time. Although the teams are the same, there&#8217;s lots more on the line.

$5 for adults; $3 for students. Ticket valid for all four games.