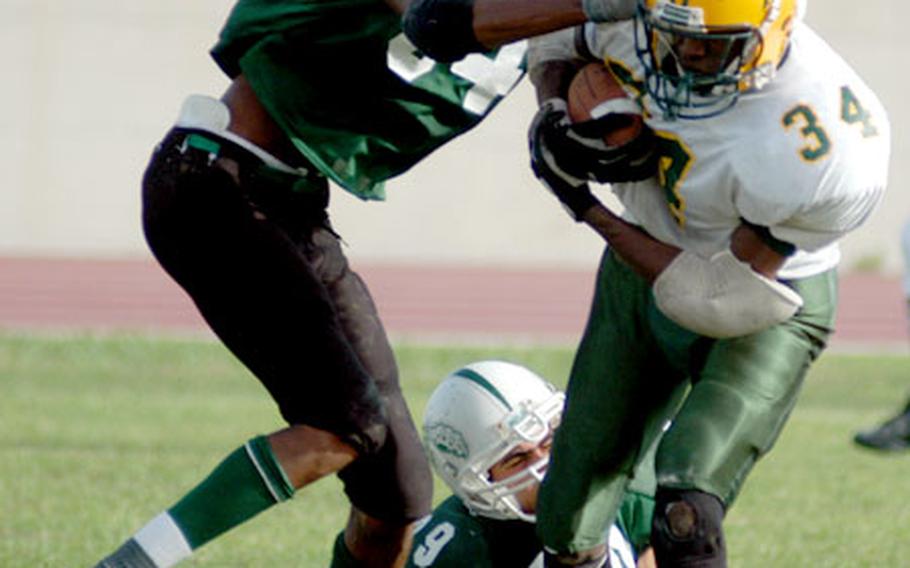 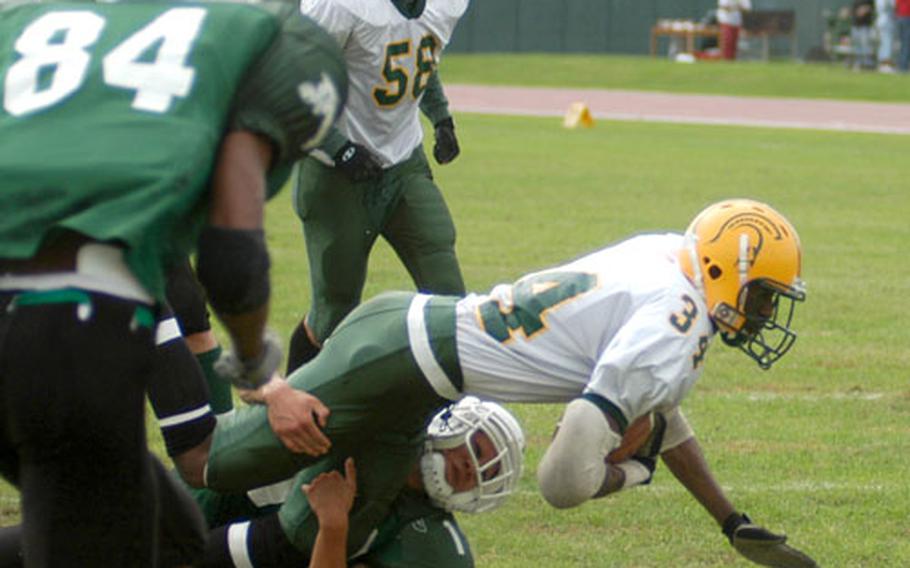 SHAPE running back Steven Small dives into the end zone with a Naples defender in tow. (Jason Chudy / S&S) SHAPE sophomore A. J. Rodgers is taken down by a pair of Naples defenders, including senior Matt Briegel, 65, early in the first quarter of SHAPE&#39;s 21-7 win at Naples. (Jason Chudy / S&S) 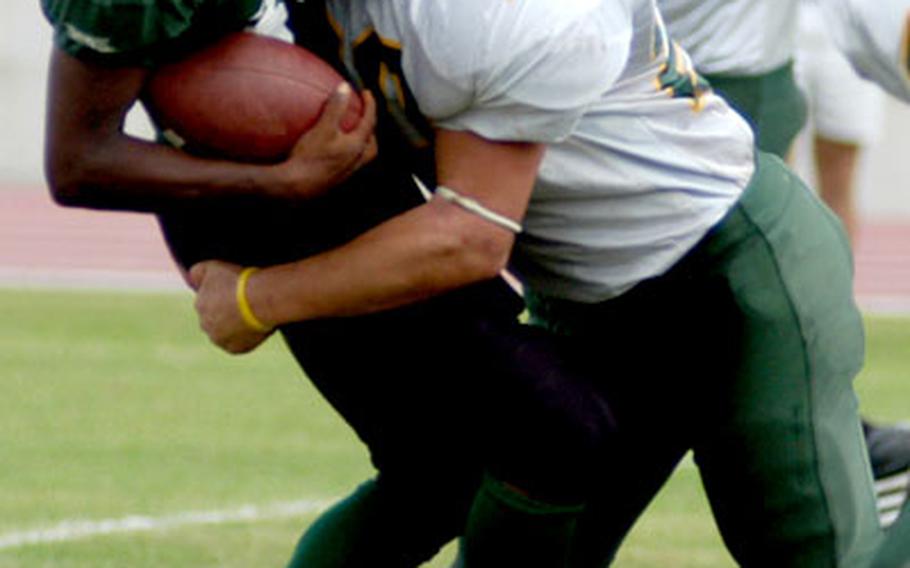 The SHAPE Spartans used a strong ground game and a hard-hitting defense to defeat Naples 21-7 in a Division II semifinal football game Saturday in Naples, Italy.

Then, with 1:46 left in the first quarter, SHAPE&#8217;s Joe Puttman intercepted a Tyler Terronaz pass at the Spartan 10-yard line and raced 90 yards for a score. Puttman had two interceptions.

The Spartans controlled the clock with a strong inside run game, Kappenman said.

Naples, which fell to 5-2, got on the board with just 1:53 left in the game when Terronaz hit Danillo Stewart with a 41-yard TD strike. Tyler White&#8217;s PAT set the final score.

Jason McKechnie paced the Naples&#8217; rushing attack with 24 carries for 140 yards. On defense, the Wildcats were led by Matt Briegel, who had 13 tackles.

SHAPE will take on the International School of Brussels in Saturday&#8217;s championship game in Baumholder, Germany.

At Brussels, Andrew Vanderlind&#8217;s last-second interception at the Raiders&#8217; 5-yard line sealed a 20-14 victory over Hanau in the Division II semifinals.

Hanau had cut the lead to six points with 15 seconds left in the game when quarterback Ketrone Blanks hit Malcolm Lane for a 5-yard touchdown. The Panthers recovered the onside kick, but Blanks&#8217; next pass was snatched up by Vanderlind to end the game.

ISB (7-0) took at 14-0 halftime lead with two second-quarter touchdowns. Drew Phigpen capped a 65-yard drive with an 11-yard touchdown run to give ISB a 6-0 lead.

After getting the ball back on a turnover, Vanderlind hauled in a 10-yard pass from Philip Lipman to make it 12-0. Lipman then hit Phigpen for a two-point conversion.

The Panthers finally got on the board in the fourth quarter when Blanks his Aaron Robinson for an 80-yard score to make it 14-7. But Lipman put the Raiders back up by 14 points with a 37-yard run.

Blanks led the Panthers&#8217; offensive effort with 212 yards passing. Lane had 11 tackles on the defensive side of the ball for Hanau, which finished the season at 4-3.