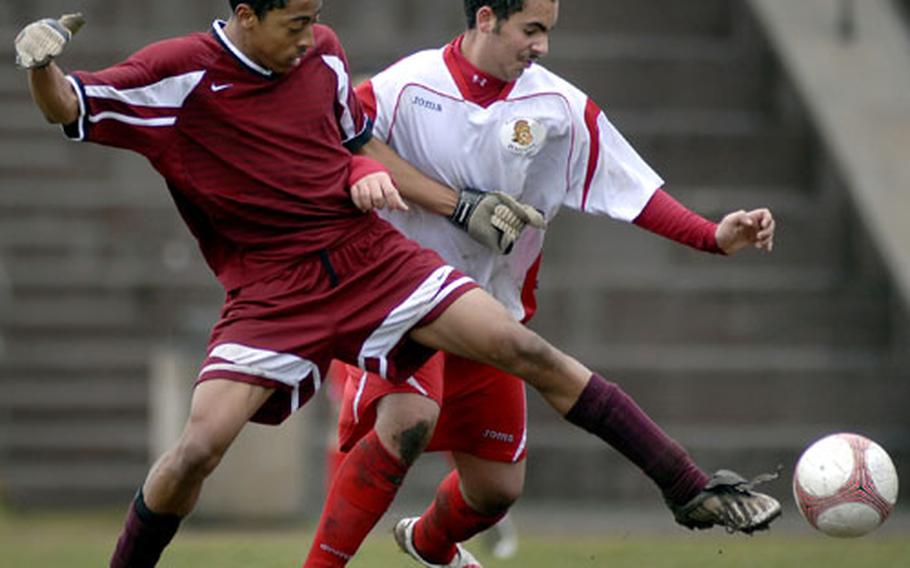 Alex Birotte from Kaiserslautern, right, moves in for a steal attempt against Joshua Davidson of Vilseck during their game Saturday at Kaiserslautern. Kaiserslautern shut out Vilseck 3-0 in a battle of D-I foes. (Ben Bloker / S&S)

Alex Birotte from Kaiserslautern, right, moves in for a steal attempt against Joshua Davidson of Vilseck during their game Saturday at Kaiserslautern. Kaiserslautern shut out Vilseck 3-0 in a battle of D-I foes. (Ben Bloker / S&S) 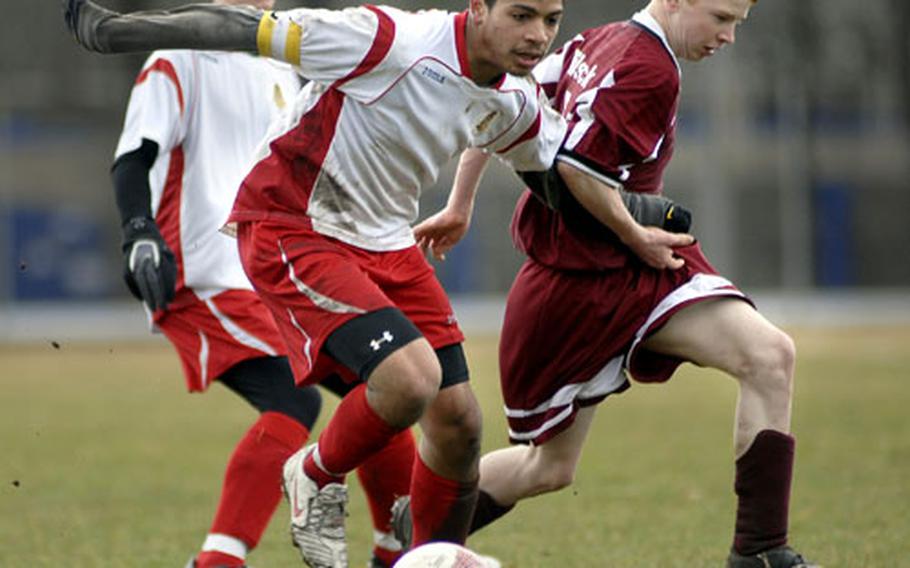 Ishmael Hampton from Kaiserslautern battles with Zane Kennedy of Vilseck for possession of the ball. (Ben Bloker / S&S) 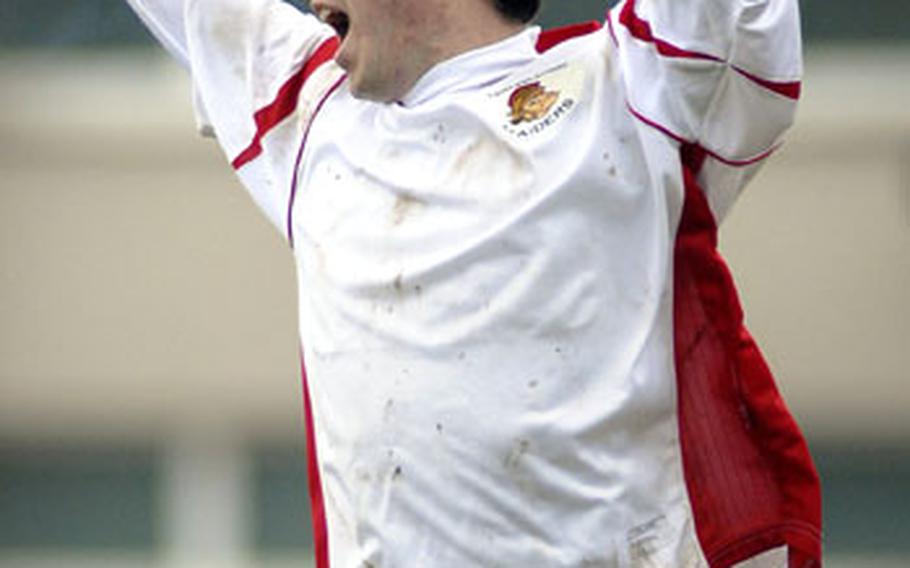 Jorge Rodriguez of Kaiserslautern celebrates his goal against Vilseck Saturday early in the second half. (en Bloker / S&S)

Kaiserslautern&#8217;s soccer team is going into the spring break on the upswing after Saturday&#8217;s 3-0 non-conference victory over Vilseck.

Russell Kreuger and Jorge Rodriguez each scored a goal and made an assist in the victory, which removed some of the sting of the Red Raiders&#8217; 4-1 loss at International School of Brussels on opening day.

"We had a fantastic game due to solid tempo, communication and, of course, shooting," K-town coach Ken Robinson wrote in an e-mail report of the game. "Much of our success was due to midfield control [by] Johnny Fryer."

Heidelberg 10, Ansbach 0: On Saturday at Heidelberg, the Lions, held to a lone goal the previous Saturday in a non-regional game against archrival Ramstein, posted a tenfold improvement in their offensive output in their Region III opener.

All-Europe midfielder Kevin Beerman led the outburst with three goals and an assist for the Lions, who take a 1-0-1 overall record and 1-0 Region II mark into the spring break.

Enrique Grandacarpio scored twice and added an assist for Heidelberg, which got a goal and two assists from Malcolm Griffin and a goal and an assist each from Gavin Grantham and Elroy Pretorius, according to Heidelberg coach Perry Puppolo.

Ansbach fell to 0-2 overall and in the region, despite 12 saves by goalkeeper Kevin Stadler. Heidelberg&#8217;s All-Europe sophomore keeper, Zach Harrington, was called on to make just one save.

Lakenheath 0, AFNORTH 0: On Friday night at RAF Lakenheath, England, most of the effort was contained before many shots were fired in the Region I showdown between AFNORTH&#8217;s defending European Division III champions and their D-I hosts.

According to Lakenheath coach Garrett Billington, his keeper, Sean Gresham, was called on to make just one save; AFNORTH goalie Nathan Flynn was forced to make none.

Still, Billington reported, "Both teams played with intensity and movement off the ball."

Each team is 1-0-1, with both winning against D-IV foes on opening day.

ISB 1, SHAPE 1: On Saturday at the International School of Brussels, a second-half goal by ISB&#8217;s Yuki Takashita consigned defending European D-II champion SHAPE to its second tie in as many games.

Trent Castro converted a pass from Simone Arcamone to score SHAPE&#8217;s goal in the first half.

Baumholder 3, Wiesbaden 1: On Saturday at Baumholder, Cote d&#8217;Ivoire native and All-Europe striker Alassane Doukoure hammered home two goals as the Bucs upped their season mark to 2-0 on a windy day. Both victories are Region II triumphs.

Prince Owusu scored the other Baumholder goal, while Ivory Freeman tallied for Wiesbaden (0-1-1).