Wildcats take on a course they've never run - and dominate 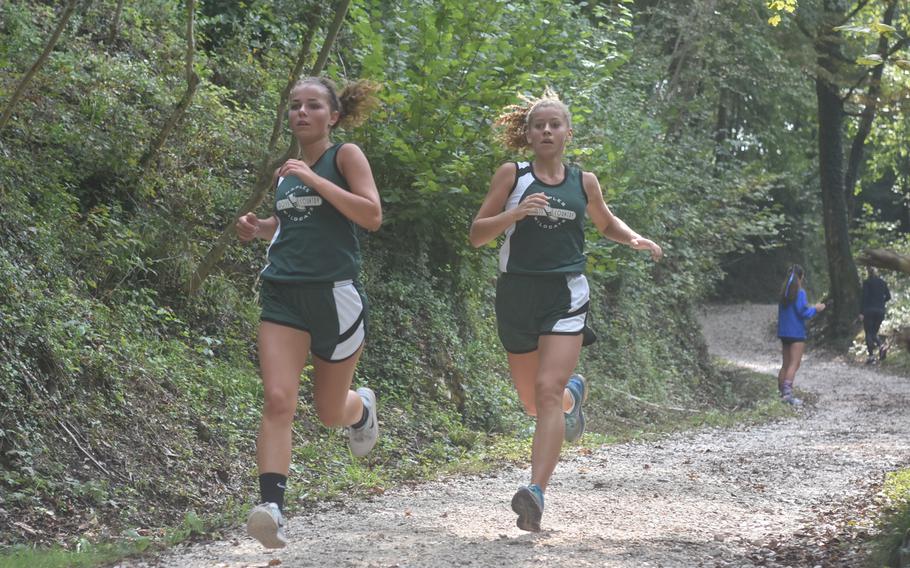 Naples' Clair Elliot, left, and Cate Westbrook came down the hill together Saturday on the 3.1-mile course at Parco di San Floriano. Elliot went on to finish in 22 minutes, 28 seconds - beating her teammate by 8 seconds. (Kent Harris/Stars and Stripes)

Naples' Clair Elliot, left, and Cate Westbrook came down the hill together Saturday on the 3.1-mile course at Parco di San Floriano. Elliot went on to finish in 22 minutes, 28 seconds - beating her teammate by 8 seconds. (Kent Harris/Stars and Stripes) 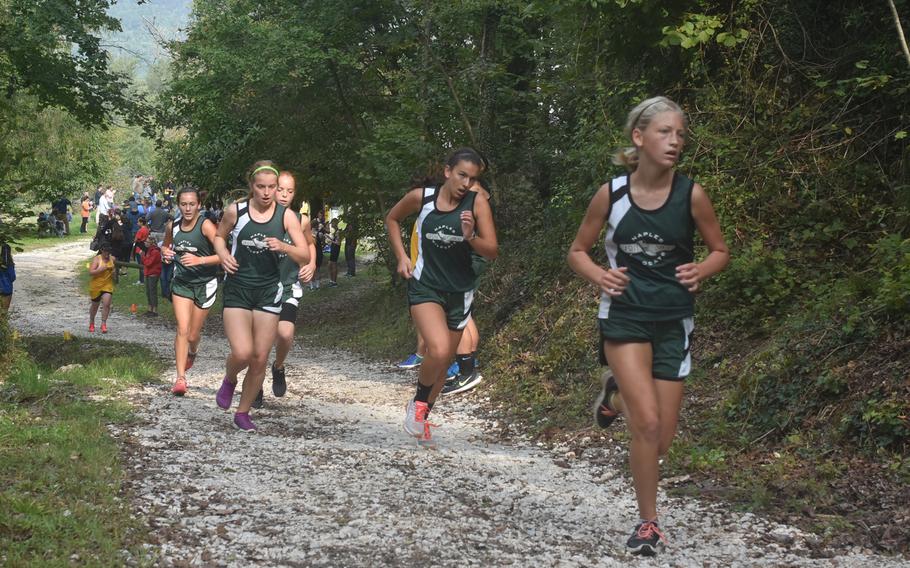 The most competitive race of the season for the Naples girls cross country team might be one to determine who gets the seven spots to compete at the European Championships. The Wildcats have plenty of depth this season. (Kent Harris/Stars and Stripes) Naples' Clair Ellliot and Cate Elliot and Sigonella's Alexa Patmor head up the hill on the Parco di San Floriano course on Saturday in Polcenigo, Italy. (Kent Harris/Stars and Stripes) Naples' Clari Elliot leads Sigonella's Alexa Patmor, Sandra Bradley and teammate Cate Westbrook around the first corner of the 3.1-mile course at Parco di San Floriano on Saturday. Elliot won the race and the others finished in the top five. (Kent Harris/Stars and Stripes) 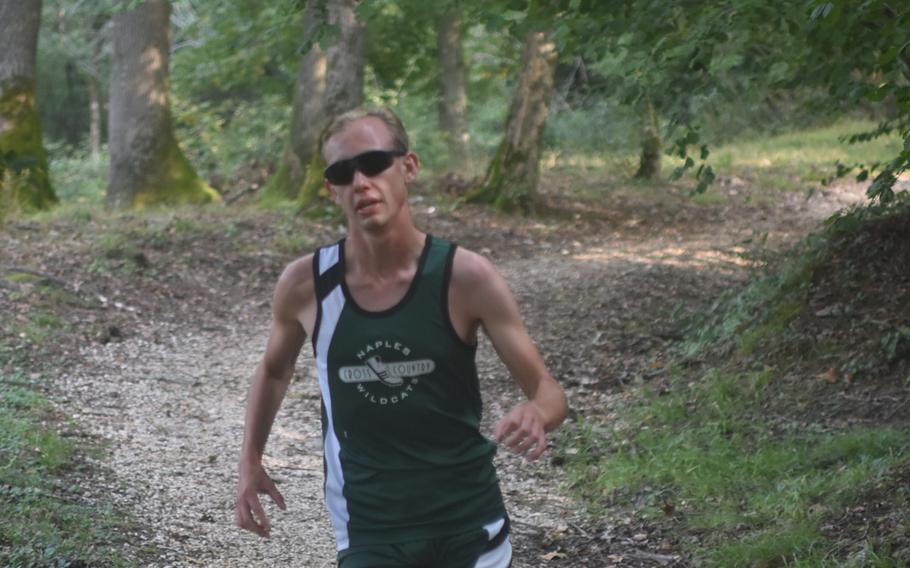 Naples junior Daniel Aleksandersen left no doubt who the top cross country runner was Saturday at Parco di San Floriano in Polcenigo, Italy. He won the race in 17 minutes, 27 seconds, a second off the course record and 1:11 ahead of his nearest competitor. (Kent Harris/Stars and Stripes) Rota's Kaden Rodriguez was second in the boys cross country race at Parco di San Floriano in Polcenigo, Italy. It was Rota's lone race of the DODEA-Europe regular season. (Kent Harris/Stars and Stripes) And they're off - 42 boys runners take to the course at Parco di San Floriano in Polcenigo, Italy - the largest turnout this century at Aviano's home cross country course. (Kent Harris/Stars and Stripes)

POLCENIGO, Italy – Watch out Stuttgart, Ramstein and the rest of Europe: Here come the Naples Wildcats.

Led by winners Daniel Aleksandersen and Clair Elliot, the Wildcats dominated the largest cross country race held at Aviano’s home course this century, sweeping both boys and girls team honors as well in a six-team event.

Aleksandersen, a junior from Norway who finished second in Europe a year ago, finished in 17 minutes, 27 seconds – just a second off the course record in his first time running on it.

“It’s a challenging course,” Aleksandersen said, citing the combination of dirt, gravel and asphalt the competitors had to traverse over the 3.1-mile trek at Parco di San Floriano.

And that’s just the way he likes it.

“It’s a mental thing,” he said. “At the same time your body is struggling, working hard, your mind … it’s just relaxing to me.”

He said after the race that he probably could have pushed himself a bit more. And because of the nature of the sport in Italy – teams usually just race against one or two other teams and courses sometimes vary – he might not get another shot at the record. It was the first time Naples ran on the course since 2013.

But he’s got his sights set on other things as well. There’s the European title to contend for. And a goal of hitting 16:10 at some point.

“It’s going to be a challenge, but I might be able to do it,” he said.

The Naples boys finished third at Europeans last year, just a point behind SHAPE for second. Coach Chip Noonen said his team has a chance to finish higher, but it’ll depend on not only Aleksandersen doing well, but four other runners crossing the line quickly.

“We’re going to need everyone to run their best races of the season on that course (in Baumholder),” he said. “Then, we’ll see.”

Tim Smith finished third for the Wildcats, trailing Rota’s Kaden Rodriguez. It’s the only race the Admirals will compete in until the championships.

While the Naples boys had three of the top five finishers, the girls matched that total. And had six of the top eight.

Clair Elliot led virtually the whole way, though the margin was far closer than Aleksandersen’s. She crossed the line in 22:28, 8 seconds ahead of teammate Cate Westbrook. Sigonella’s Alexa Patmor was third. She and teammate Sandra Bradley were the only non-Naples runners in the top eight. Noonen said his girls team might be the deepest he’s had.

“But the competition is so tough in the girls,” he said. “There are some really strong teams and moving up (from fourth a year ago), will be tough.”