Buy Photo
Black Forest Academy junior Joseph Leavitt drives to the bucket while Wiesbaden sophomore John Arnold tries to slow him down during a Friday night matchup between the Falcons and Warriors. (Mark Patton/Stars and Stripes)

Buy Photo
Black Forest Academy junior Joseph Leavitt drives to the bucket while Wiesbaden sophomore John Arnold tries to slow him down during a Friday night matchup between the Falcons and Warriors. (Mark Patton/Stars and Stripes) 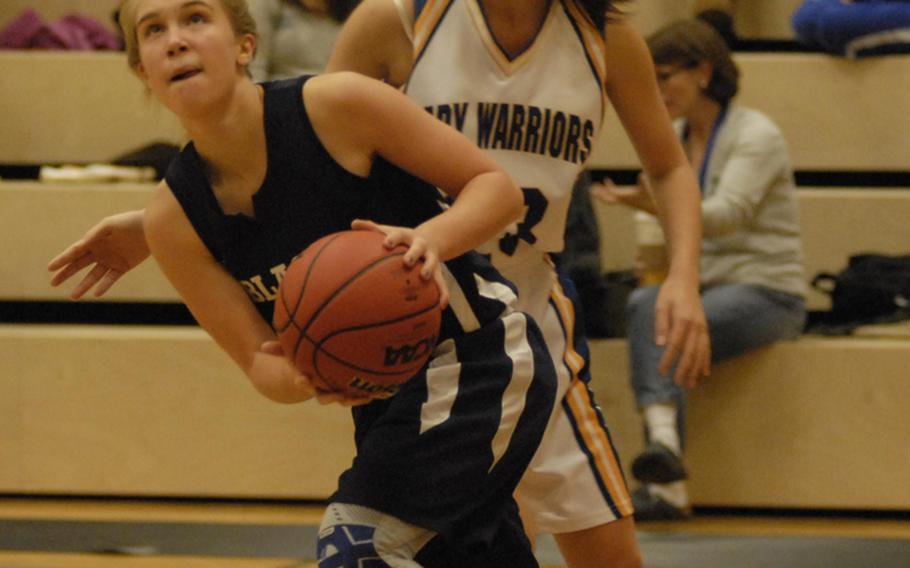 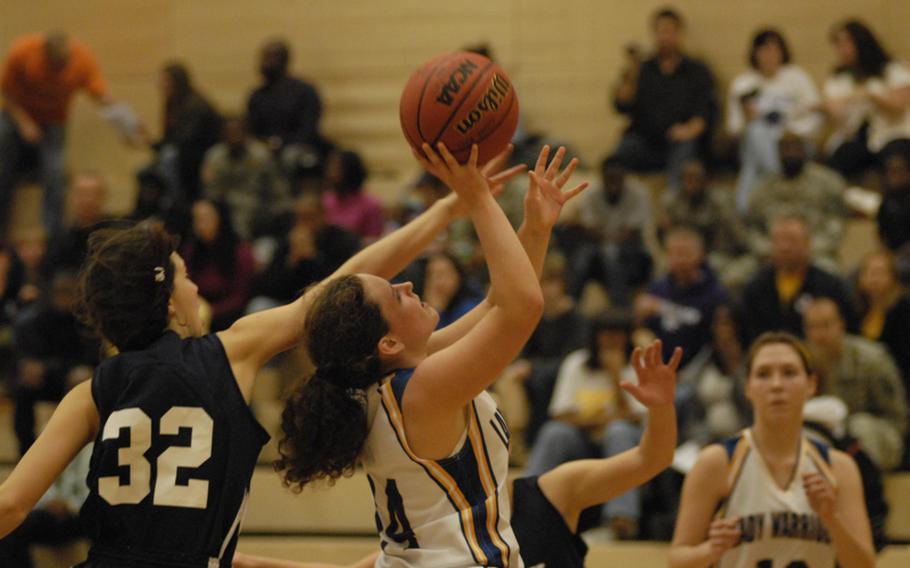 Buy Photo
Wiesbaden junior Katherine Mosley drives to the bucket past the outstretched arm of Black Forest Academy freshman Hannah Harrop. The Lady Warriors toppled the Lady Falcons in their first game of the season, 32-19. (Mark Patton/Stars and Stripes) 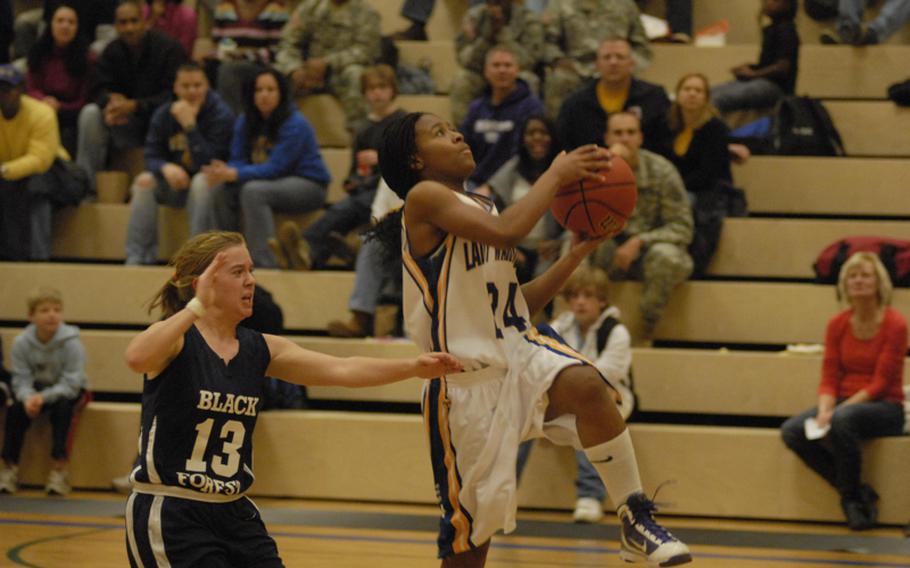 Buy Photo
Wiesbaden sophomore Phylecia Faublas drives to the basket as Black Forest Academy senior Taylor Clemens tries to slow her down. The Lady Warriors went on to win their first game of the season, 32-19 (Mark Patton/Stars and Stripes)

WIESBADEN, Germany - Both the boys and girls Wiesbaden basketball teams tipped off their season Friday night with victories, but the hoopsters from the Black Forest Academy didn&rsquo;t make it easy.For the Lady Warriors, it was all about defense, something Wiesbaden coach Jim Campbell told his lineup they would have to rely on to get the job done in their opening game.They did just that, holding a scrappy Black Forest squad to six points in the second half, to break away from the Lady Falcons for a 32-19 season-opening victory.The Wiesbaden girls are reliant on fresh talent to start this season&rsquo;s campaign, as none of their starters from last year were on the court. Trailing by only three at halftime, it looked like the Lady Falcons, runners-up in last year&rsquo;s DODDS-Europe championships, weren&rsquo;t intimidated by D-I Wiesbaden.But the hustle and aggressive second-half play proved to be too much for Black Forest to overcome.The Wiesbaden defense, led by sophomore Phylecia Faublas&rsquo;s four steals, applied constant pressure to the Lady Falcons to wear them out down the stretch.&ldquo;For the first game, I couldn&rsquo;t be any happier with how it went,&rdquo; said Wiesbaden junior Katherine Mosley, who finished the game with four points.On offense, the Lady Warriors spread the ball around, with senior Michelle Schonberg leading the charge with eight. Senior Andrea Arnold and junior Kirsten Velsvaag pitched in for seven and six points, respectively. Arnold and Schonberg each had a team high four rebounds.&ldquo;We really helped each other prepare to not be so nervous,&rdquo; Schonberg said. &ldquo;This year is going to be a good one.&rdquo;Wiesbaden 41, Black Forest 32: The Wiesbaden boys exploded for 20 points in the fourth quarter to overcome a Black Forest team that seemed determined to pull off the season&rsquo;s first upset. Trailing for most of the game, a couple of clutch three-point shots in the game&rsquo;s final minutes shifted the momentum to the Warriors, and not a moment too soon. &ldquo;It felt good to finally hit one of them,&rdquo; senior Gary Miskovsky said of his three-point shot with 5:11 left on the clock that gave the Warriors their first lead since the opening minutes of the game.With the Falcons trailing by just one, another shot from behind the arc by Wiesbaden sophomore John Arnold seemed to take the wind out of the Black Forest sails. Miskovsky, playing his first basketball game in a Wiesbaden uniform, led all scorers on the night with 11. He also swatted away six Falcons shots and added six rebounds. Miskovsky said his team still has some work to do: &ldquo;We need to play with more heart and energy,&rdquo; he said.Sophomore John Arnold pitched in eight points and sophomore Andrew added seven points and an impressive 18 rebounds.The Falcons were led by seniors Josiah Kelley, who finished with 10 points, and Anthony Purpero, who had nine.The Warriors aren&rsquo;t chalking up Saturday&rsquo;s rematch in the win column just yet.&ldquo;We have to get up and get ready to play,&rdquo; sophomore Kelsey Thomas said.pattonm@estripes.osd.mil