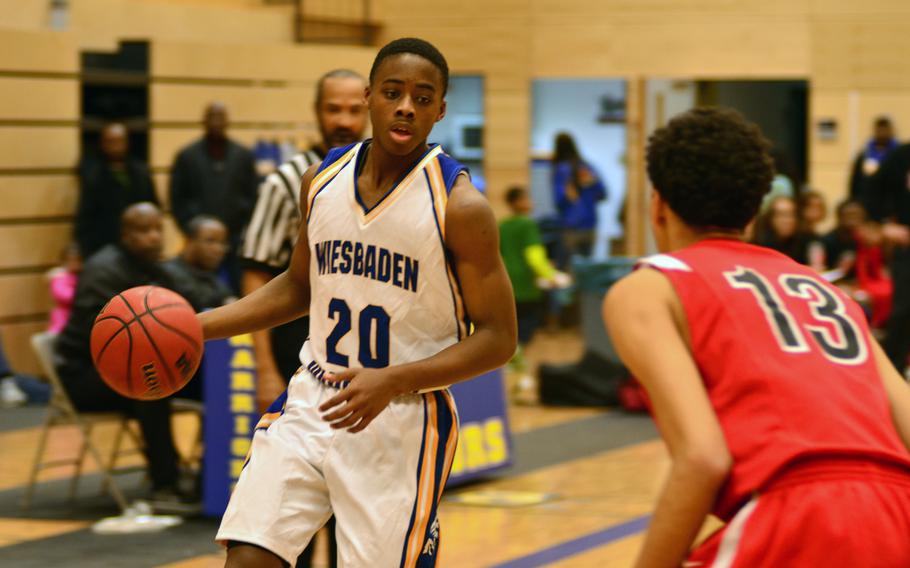 Buy Photo
Wiesbaden's Darren Williams attempts to drive the ball past Kaiserslautern's Emilio Moreno on Saturday. Wiesbaden held on to win the game 78-70. (Eric A. Brown/Stars and Stripes)

Buy Photo
Wiesbaden's Darren Williams attempts to drive the ball past Kaiserslautern's Emilio Moreno on Saturday. Wiesbaden held on to win the game 78-70. (Eric A. Brown/Stars and Stripes) 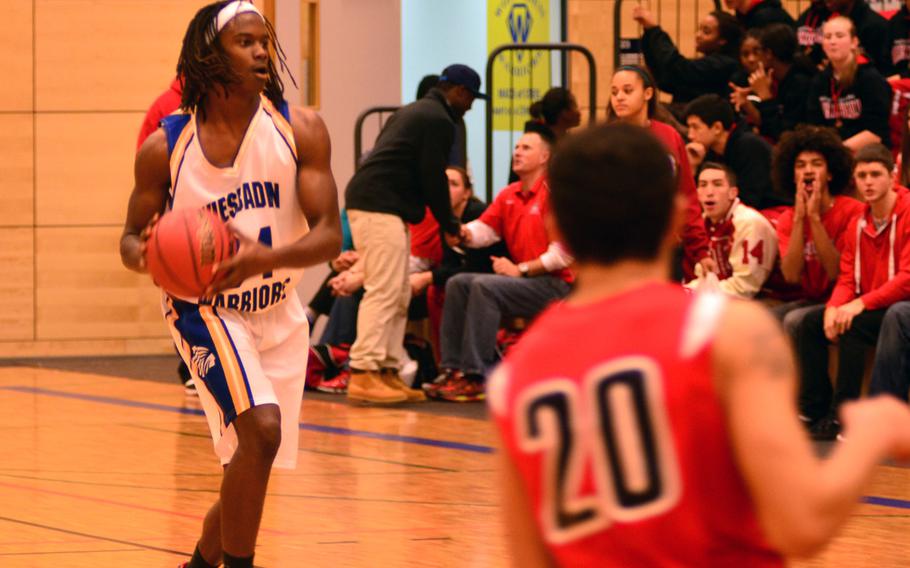 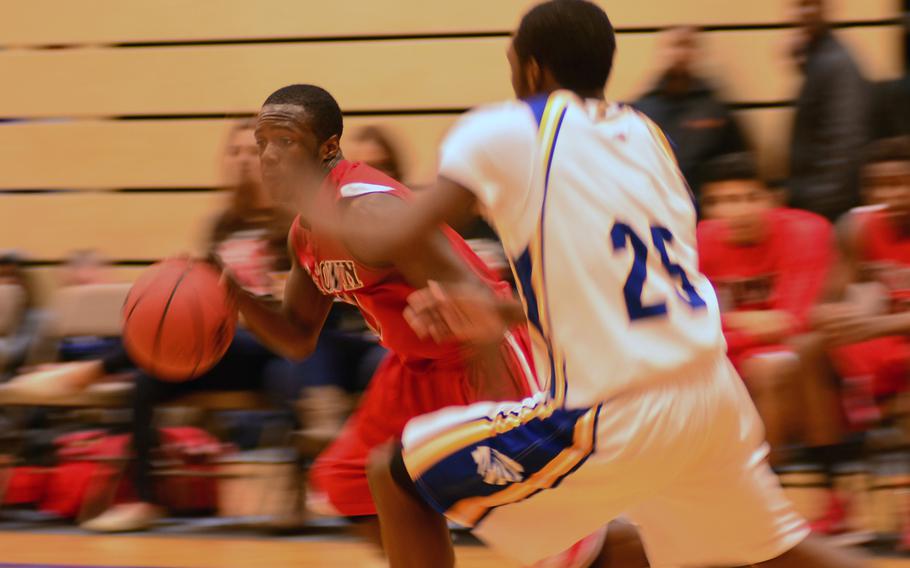 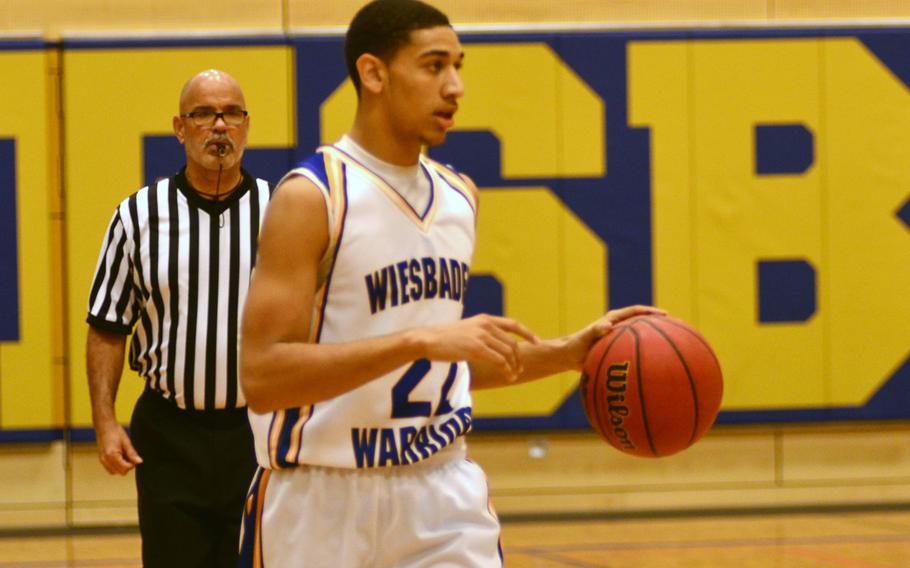 Buy Photo
Wiesbaden's' Kelsey Thomas looks for opportunities down the court to score two of his 17 points. Thomas was the Warriors' high scorer during the matchup with Kaiserslautern. (Eric A. Brown/Stars and Stripes) 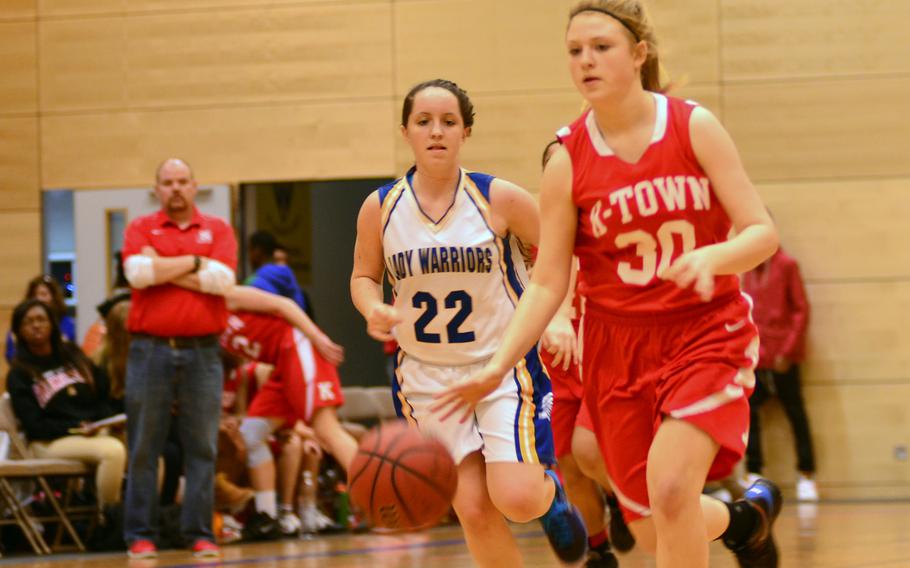 Buy Photo
Kaiserslautern's Althea Honan dribbles past Wiesbaden's Rebecca Russell on Saturday. The Warriors went on to win in overtime 45-39. (Eric A. Brown/Stars and Stripes) 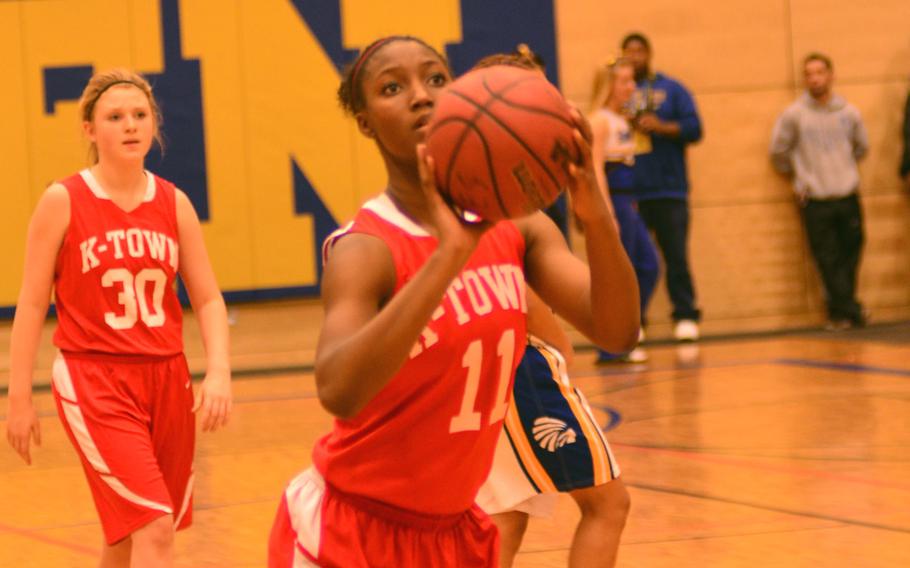 Buy Photo
Kaiserslautern's Alana Dickerson prepares to score one of her eight points against Wiesbaden on Saturday. After the Red Raiders' early lead, the Warriors came back to win 45-39. (Eric A. Brown/Stars and Stripes) 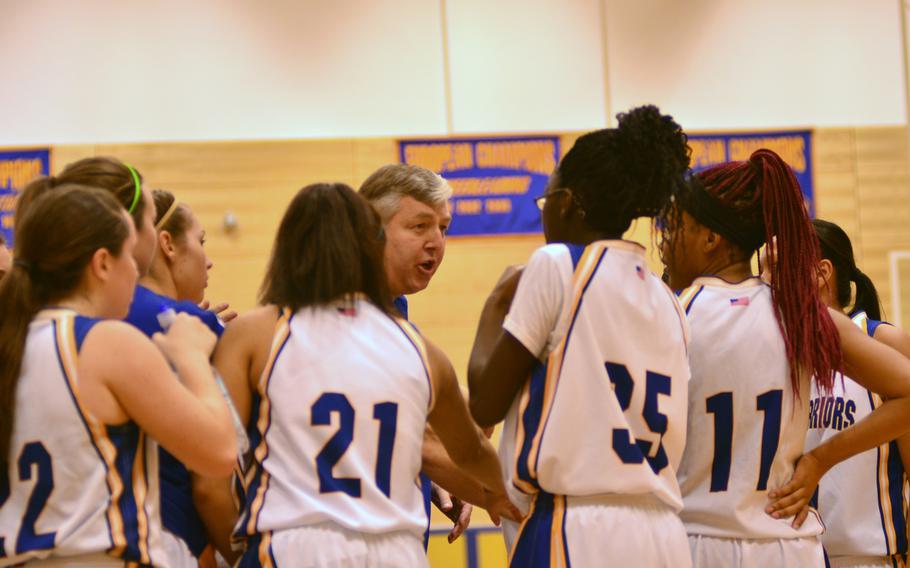 Buy Photo
Jim Campbell, head coach of the Wiesbaden Warriors, discusses strategy with his team during a timeout. The Lady Warriors went on to defeat the Red Raiders in overtime, 45-39. (Eric A. Brown/Stars and Stripes)

The Raiders girls came out strong early on 10-2 and didn’t allow Wiesbaden to score until late in the first quarter when Warriors’ guard Rebecca Russell finally put a deuce on the scoreboard.

K-town’s zone defense was able to contain Wiesbaden to only eight points in the first half, but the Warriors girls rallied in the second half and closed the lead to 21-15 in the third quarter and only two points with two minutes left in regulation.

Wiesbaden was able to tie the game 35-35 with 27 seconds left, but two Red Raiders fouls and Warriors failed free throw opportunities forced the game into overtime.

Warriors’ Rebecca Russell was able to put the first two points on the board in overtime and the team stretched their lead to win the game 45-39.

“We’re a really young team and we got to learn how to win,” said Corey Sullivan, Kaiserslautern girls head coach.

The game’s top rebounder was Wiesbaden’s Cierra Martin, who scored 12 points to go with 22 rebounds.

“We got out-rebounded on the defensive end,” Sullivan said.

In varsity boys action, Kaiserslautern’s Lorenzo Williams and Emilio Moreno combined for 36 points, but it still wasn’t enough to hold the Wiesbaden from the win.

“Everyone was on their ‘A’ game,” said Warriors’ point guard Kelsey Thomas, who scored 17 points.

Late in the fourth quarter K-town had closed the lead by two points followed by a short jump shot by Lorenzo Williams which tied the game at 58. The Warriors were able to fight through to the end winning a close 78-70.

Wiesbaden coach David Brown said that his players got a little relaxed in the second half, but were able to keep the pressure up.

Kaiserslautern’s Williams gave them some trouble, though. He scored 18 points and had five assists.

“We did a pretty good job at keeping Lorenzo out of the paint,” Brown said. “Once he got in the paint, he really got going.”