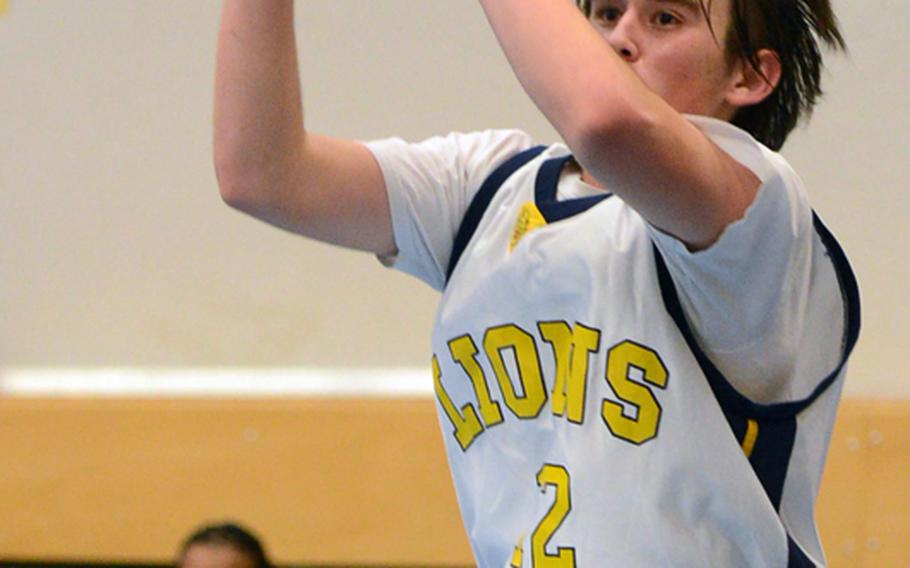 Heidelberg's Joseph Patrick scores one of his three-pointers in the Lions' 50-46 win over Hohenfels Friday night. (Michael Abrams/Stars and Stripes)

Heidelberg's Joseph Patrick scores one of his three-pointers in the Lions' 50-46 win over Hohenfels Friday night. (Michael Abrams/Stars and Stripes) 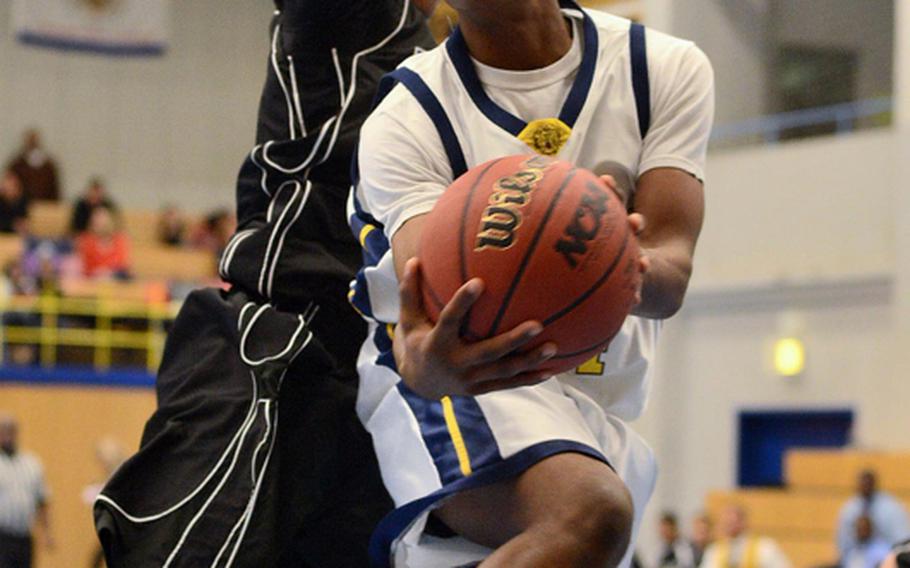 Heidelberg's Kyle Moore, right, gets past Kordell Craft of Hohenfels in the Lions' 50-46 win over the visiting Tigers Friday night. (Michael Abrams/Stars and Stripes) 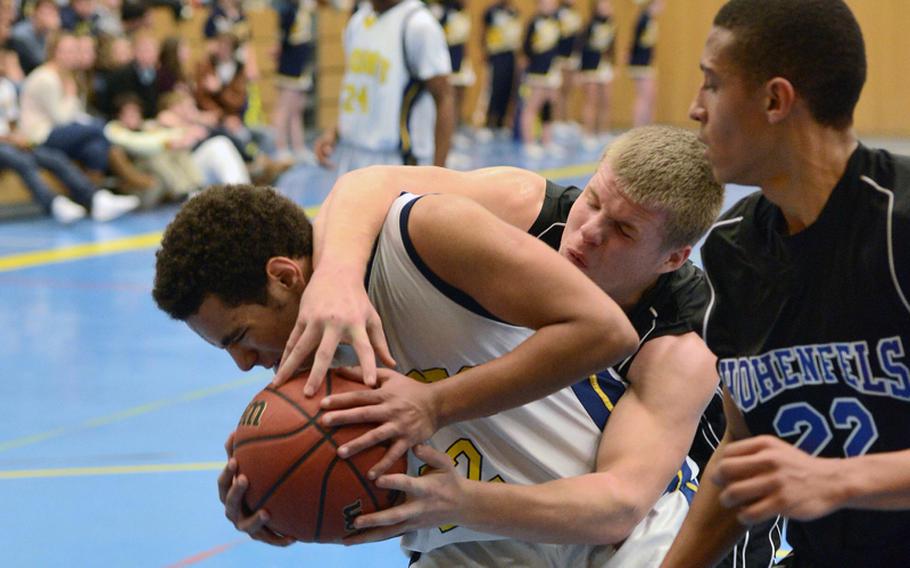 Heidelberg's Devyn Tucker, left, keeps the ball from the grasping hands of David Vidovic of Hohenfels in the the Lions' 50-46 win over the visiting Tigers on Friday night. At right, Jeremy Bormann watches the action. (Michael Abrams/Stars and Stripes) 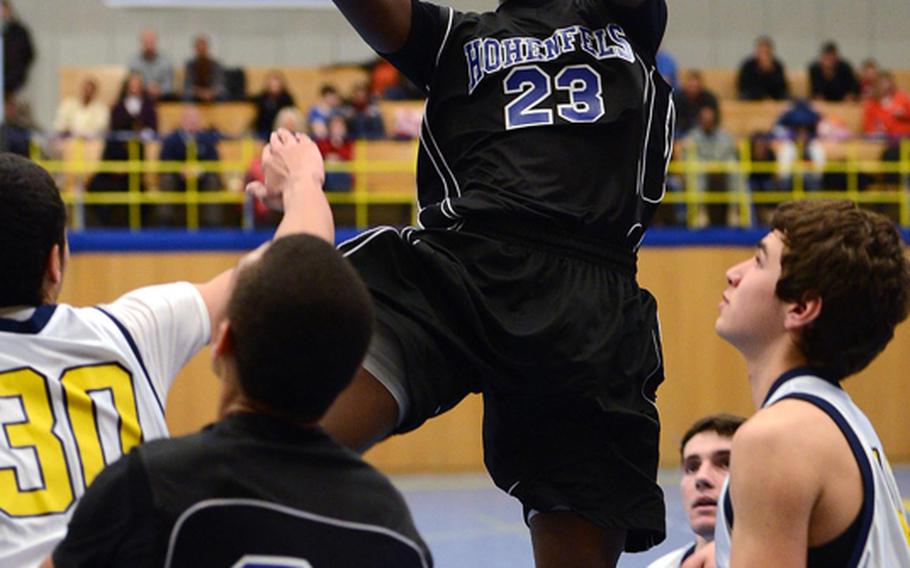 Kordell Craft of Hohenfels get off a shot in the Tigers' 50-46 loss to Heidelberg Friday night. (Michael Abrams/Stars and Stripes) 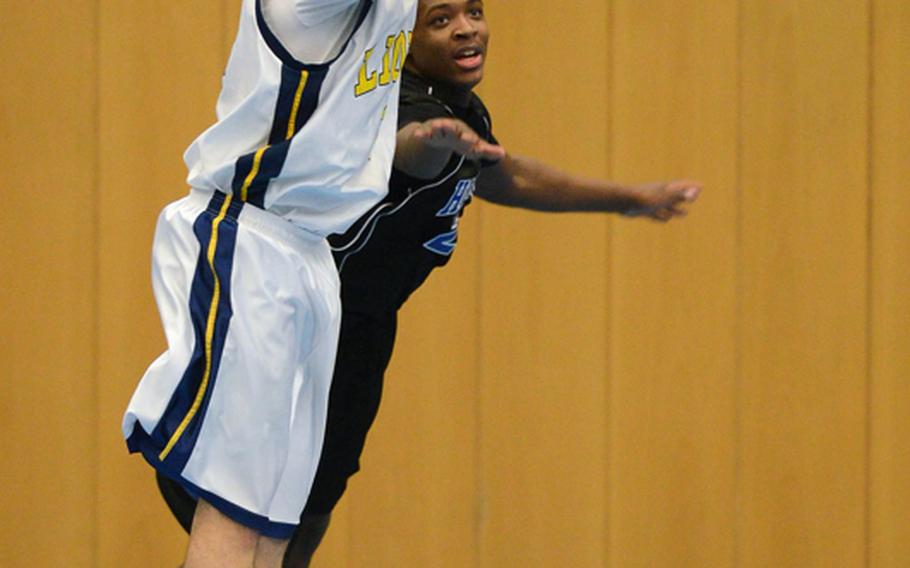 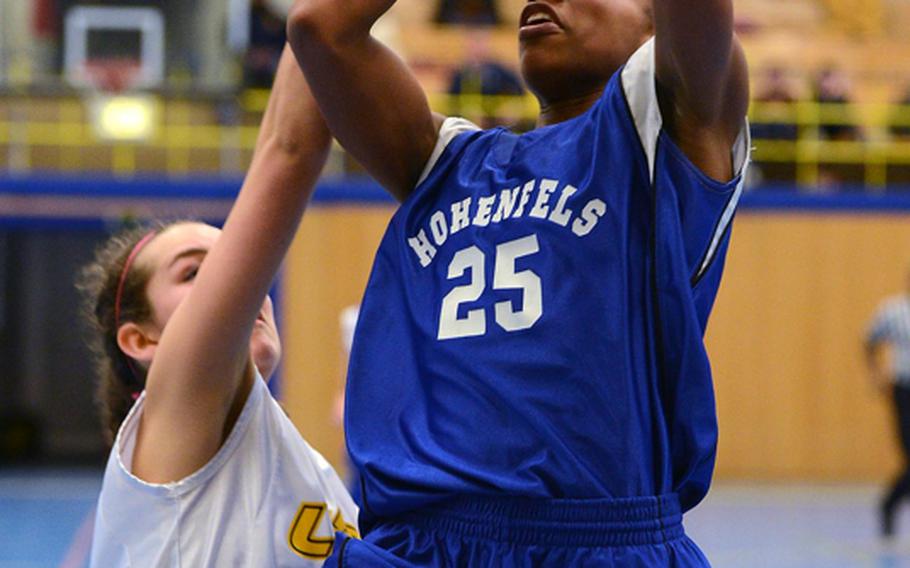 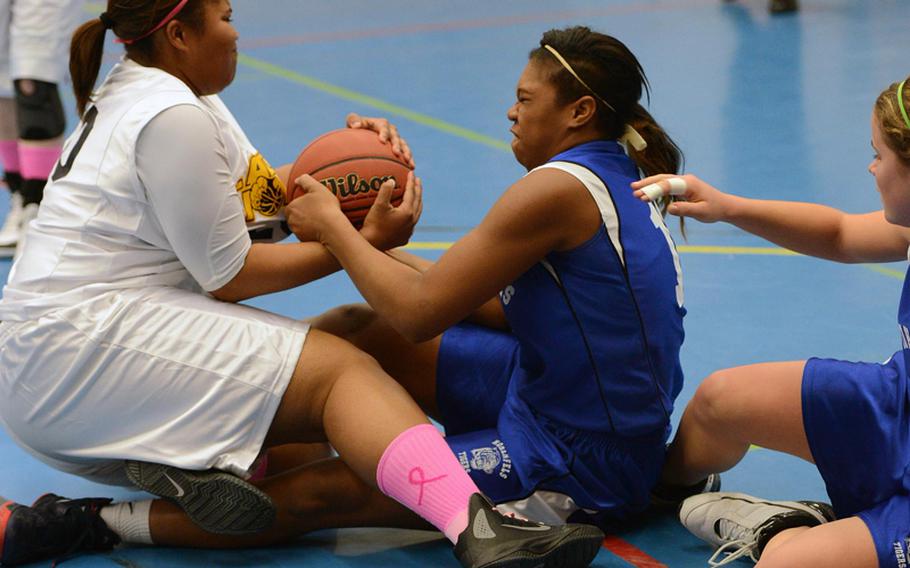 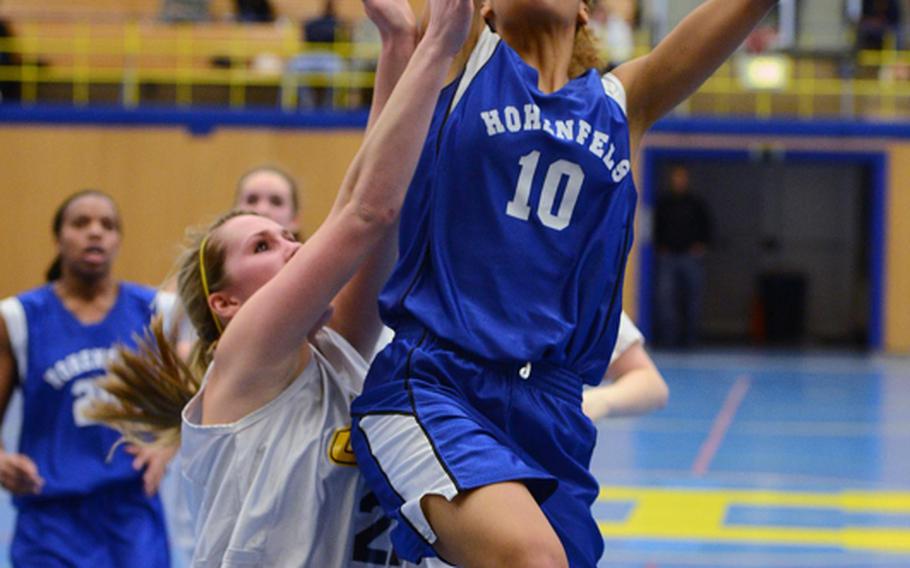 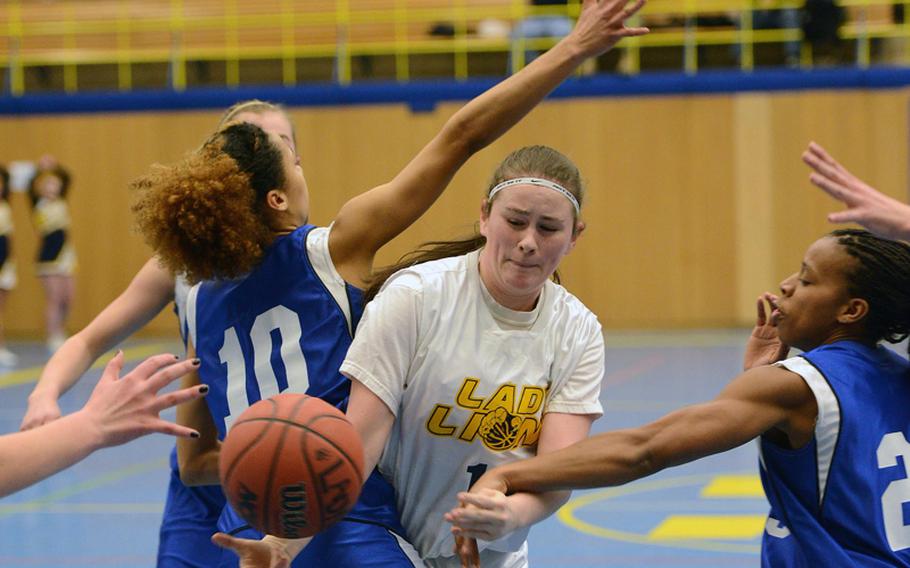 Heidelberg's Cloe Parker dishes off a pass to a teammate despite the defense of Kiana Glenn, left, and Tashia Golson of Hohenfels. The Lions lost to the visiting Tigers 37-33 Friday night. (Michael Abrams/Stars and Stripes) 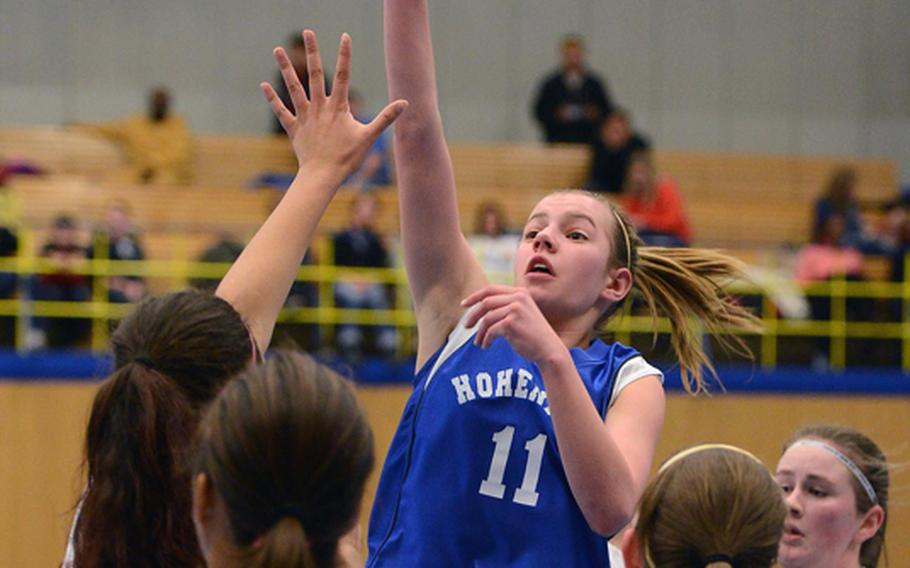 Shelby Atkinson of Hohenfels gets off a jumper in the Tigers' 37-33 win over Heidelberg Friday night. (Michael Abrams/Stars and Stripes) 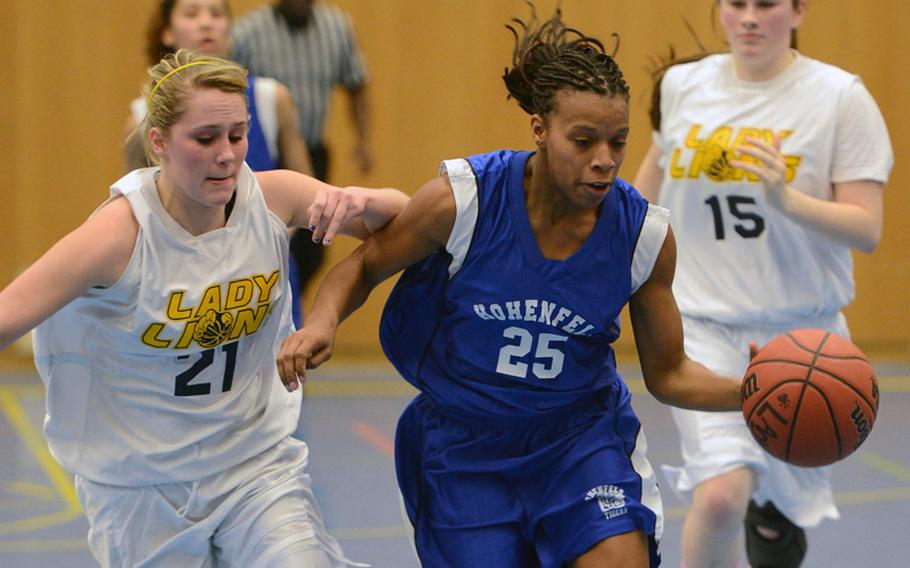 HEIDELBERG, Germany – The “Last Roar” nearly morphed into a whimper Friday night before the Heidelberg boys found the proud program’s voice. The defending Division I champions in both boys and girls basketball, Heidelberg hosted small Division II opponent Hohenfels on Friday as the end of Lions athletics looms ever nearer. The high school will close along with the base that houses it in the coming months. As a result, the Lions have been hampered by attrition and a dwindling talent base, making a final-season championship unlikely for either Heidelberg team. Both sides of Heidelberg’s story – its wounded state, and its defiant resilience – were on display Friday as DODDS-Europe hoops emerged from the long holiday break. The Lions girls team fell to Hohenfels 37-33, while the boys delivered a 50-46 victory. In the opening game of the varsity doubleheader, the Heidelberg girls saw a seven-point lead and a likely home-court victory washed away in a deluge of fourth-quarter fouls and turnovers and an unrelenting opponent. Hohenfels seized on the Lions’ sloppy play down the stretch and elbowed back into the game with a string of free throws and fast-break baskets. Tashia Golson’s steal and resulting free throw tied the game at 29 with 4 minutes, 30 seconds to play, completing a steady recovery from the 23-16 lead the Lions built early in the third quarter. Kiana Glenn’s steal and layup just 25 seconds later gave the Tigers their first lead of the second half. Golson and Glenn finished the job in the final minute, combining for the team’s final five points as Hohenfels ended the game on a 21-10 run. The seven-point deficit – significant in a game that ended with both teams in the 30s – struck senior star Golson as a manageable margin. “We were happy that we were only down by seven. In previous years we would have down by 20,” said a giddy Golson, relishing her tiny school’s conquest of the once-mighty Division I foe. “Seven was a good number for us.” That kind of self-assured attitude is exactly what first-year Tigers coach Aaron Wells wanted from his squad as he prepped them for a late comeback. “I told the players to calm down,” Wells said. “Our pace was too fast. We needed to slow down and play the game we play.” Golson posted game-high totals of 16 points, 13 rebounds and nine steals, while Glenn added 11 points. Romina Fears led Heidelberg with 10 points and five boards.

Heidelberg boys hold onHistory threatened to repeat itself in the boys game. Hot shooting propelled the Lions to a 14-4 first-quarter lead; the advantage held steady at 30-23 at halftime and returned to double digits entering the final eight minutes. The fourth quarter was a different animal. The Tigers surprised a coasting Lions squad with 11 unanswered points to open the final frame, holding Heidelberg scoreless for the quarter’s first five minutes and tying the score at 44.

It took a clutch three-pointer from Joseph Patrick and a key blocked shot by Jason Caldwell to keep the boys from suffering the same fate as the Heidelberg girls. “We survived by picking up the intensity at the end,” said Lions head coach Justin Bates. “We needed this win bad. This game is the beginning of the second season within a season.” With the score tied, Patrick got an open look in transition with 30 seconds to play and dropped in the last of his game-high 18 points, delivering a memorable moment in the midst of a tumultuous senior season. “I’ve been here my whole high school career. (This season) is a lot different,” said the senior guard. “Heidelberg is such a tight-knit community. We’re trying to do our best in the last season for such a storied high school.” Junior guard Mark Carr was brilliant in defeat for the Tigers, scoring 17 points primarily on five three-pointers and adding six steals. The teams play again at Heidelberg on Saturday afternoon.broomeg@stripes.osd.mil