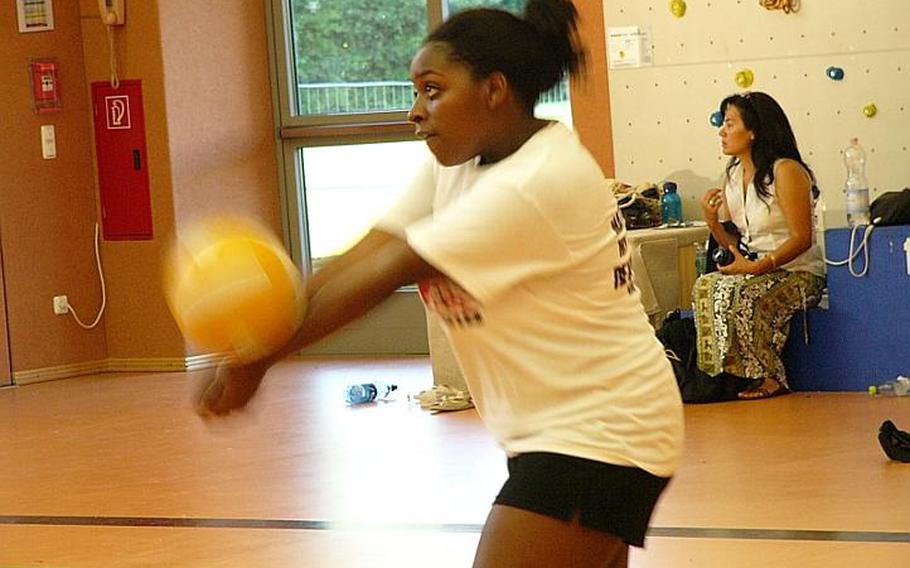 Bamberg sophomore Chelsey Emery moves the ball along Saturday night during an opening-day passing drill at a high school volleyball camp in Vilseck, Germany. The camp runs through Tuesday. (Rusty Bryan/Stars and Stripes)

Bamberg sophomore Chelsey Emery moves the ball along Saturday night during an opening-day passing drill at a high school volleyball camp in Vilseck, Germany. The camp runs through Tuesday. (Rusty Bryan/Stars and Stripes) 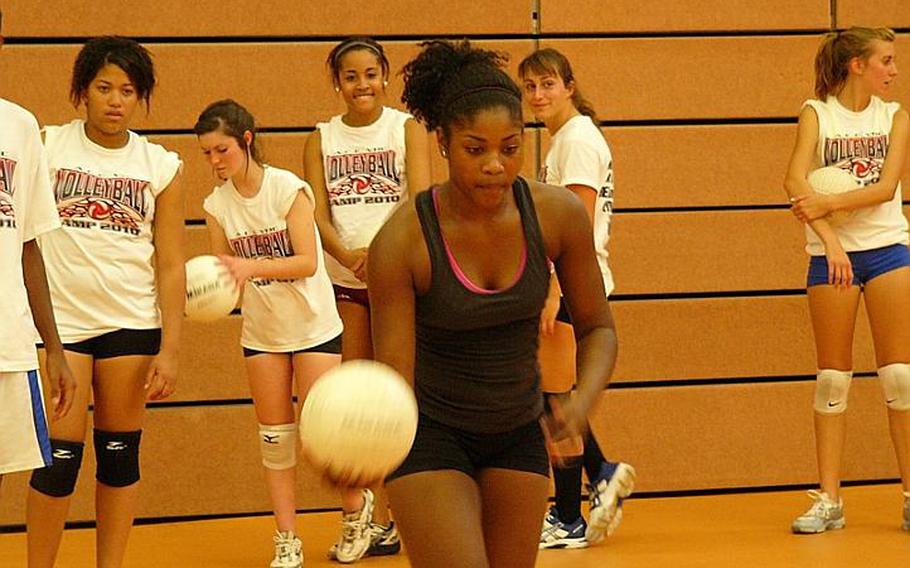 &ldquo;The focus of the camp is ball control,&rdquo; said Vilseck head coach and camp director Brian Swenty. &ldquo;We&rsquo;re going to teach them good techniques and give them lots of repetition.&rdquo;

The camp&rsquo;s staff members, who include instructors from as far away as Puerto Rico, began with a skills evaluation and vertical-leap testing.

The tests helped group the players according to ability and experience. Swenty said participants ranged from all-stars such as Allison Gunsch of Heidelberg, Anna Muzzy of Vilseck and LeAmber Thomas of Wiesbaden to &ldquo;those who had never seen a ball before.&rdquo;

The high-school-age camp was the second phase of the AAU-sanctioned ACE camp Swenty organized for the first time here this summer. Fifteen players showed up for the elementary- and middle school camps, which began last Thursday.

&ldquo;We had a little camp in Bamberg,&rdquo; she said. &ldquo;Most of us [18 in total] then came here.&rdquo;

And even though the camp was just minutes into its first session, Emery said she&rsquo;d already picked up a valuable tip or two.

&ldquo;I&rsquo;ve learned you have to be ready at all times,&rdquo; she said. &ldquo;You have to anticipate where the ball&rsquo;s going and be ready to play it.&rdquo;

Swenty said the campers would take part in three daily sessions &ndash; two long ones during the daytime and a &ldquo;less intense&rdquo; one in the evening that concentrates on technique.

To handle the demands of days that lengthy, the campers did some carbo loading Sunday morning at a pancake breakfast prepared by volunteers who arrived at the high school at 5:30 a.m.

The Vilseck camp is an addition to the calendar to June&rsquo;s Aviano volleyball camp, attended this year by some 130 players.

&ldquo;It&rsquo;s different in a good way,&rdquo; said Vilseck junior-to-be Mariah Morris, who traveled to Aviano earlier this summer, about the new camp on the block. &ldquo;(In Aviano) there were a lot more girls &ndash; there wasn&rsquo;t as much individual instruction.&rdquo;

Although DODDS-Europe offers no organized varsity volleyball to boys attending schools north of the Alps, the Vilseck camp drew one male participant, 16-year-old Vilseck junior-to-be Renanzo Williams. Williams said he&rsquo;s sharpening his skills in preparation for playing with a German club team in the area.

Asked what it was like to be the only boy among 73 girls, Williams brightened quickly.

&ldquo;It&rsquo;s really cool,&rdquo; he said as he took the floor for a return-of-service drill.