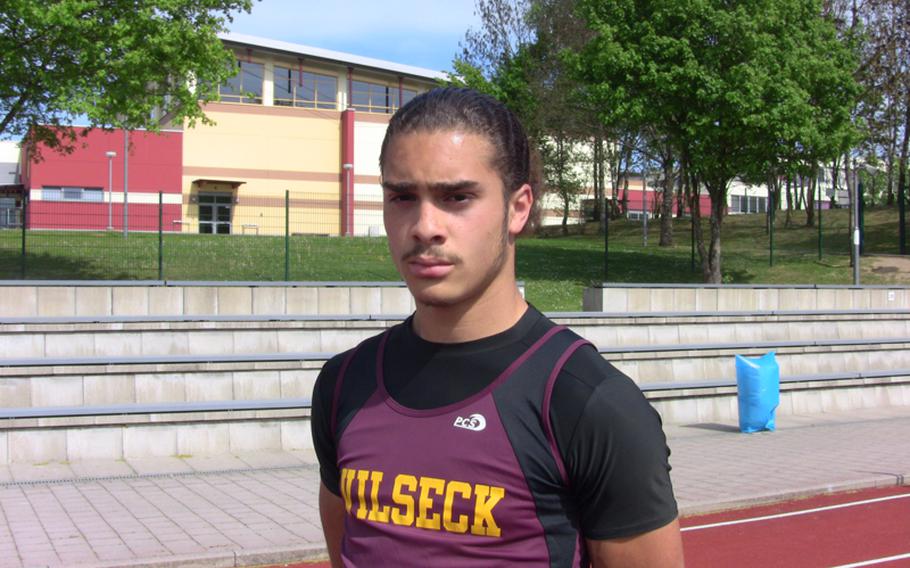 Vilseck's Darius Whitehead has posted the quickest time in the 100 meters in DODDS-Europe this year. The honors student attributes much of his success to his step-parents, who have raised him since he was young. (Courtesy photo)

VILSECK, Germany &mdash; Vilseck senior sprinter Darius Whitehead has put up numbers in 2011 that are there for all to see. Chief among them is the DODDS-Europe 2011-best 10.78 seconds that Whitehead posted in a hand-timed 100 meters April 30 in Regensburg, Germany. That mark is hardly a fluke, Vilseck coach Eric Mead said Monday.&ldquo;He&rsquo;s been sub-11 several times,&rdquo; Mead said.But times faster than 11 seconds don&rsquo;t begin to describe Whitehead&rsquo;s true speed. He&rsquo;s also outrun a double dose of adversity that would leave most of the rest of us weighed down at the starting line.&ldquo;My mother had a stroke when I was three,&rdquo; Whitehead said Monday by telephone. &ldquo;She couldn&rsquo;t take care of me, and my stepmother (Osaro Grant, mother of former Vilseck sprint star Jamal Grant) and my biological father took care of me.&rdquo;For Whitehead, being separated from his mother was just the first hurdle life placed in his way. As devastating as that loss must have been to a preschooler, tragedy slapped Whitehead again when his father passed away in 1999.&ldquo;I was just in the second grade,&rdquo; Whitehead recalled. &ldquo;My stepmom kept me so I wouldn&rsquo;t be taken into foster care. Without her, I wouldn&rsquo;t have gotten anywhere.&rdquo;Instead of bewailing the bad breaks that had come his way, Whitehead began making the most of the opportunity his stepmother&rsquo;s generous spirit provided.&ldquo;I stayed home about two weeks when my biological father died,&rdquo; Whitehead said, &ldquo;then I became determined to make sure I was good at everything.&rdquo;Whitehead&rsquo;s determination to be good at everything still shows in everything he does.In the classroom, he&rsquo;s an honor student who&rsquo;s planning to study mechanical engineering this fall at the University of South Florida. On the track, where he&rsquo;ll be running the 100 and 200 meters and legs of the 4x100 and 1,600 sprint medley relays at Europeans, he has already accomplished his goal of running a better time than his brother Jamal.That is just one of his goals, however. &ldquo;I want to break the record in the 100 meters,&rdquo; Whitehead said.The school record, or Isaiah Fluellen&rsquo;s DODDS-Europe mark of 10.50 set in 2001?&ldquo;Both,&rdquo; Whitehead replied. &ldquo;The school record is 10.6, and I&rsquo;m close to that.&rdquo;And Whitehead, who said he&rsquo;s a slow starter, hopes to threaten Fluellen&rsquo;s mark by improving his technique a bit between now and the European championships May 20-21. &ldquo;He&rsquo;s a tall (6-0), upright sprinter,&rdquo; Mead said. &ldquo;We&rsquo;ve been trying to get him to stay low coming out of the blocks.&rdquo; Even if he misses the record, Whitehead&rsquo;s determined to earn the 100-meter title that eluded him last spring, when he finished a disappointing fifth in 11.38.&ldquo;There were four false starts in that race,&rdquo; Mead recalled. &ldquo;I think they got the better of him.&rdquo;This year, Whitehead sees the competition in the 100 coming from Wiesbaden&rsquo;s Nicholas Colbert and Roscoe Johnson. Both Warriors have broken 11 seconds this season, but even so, they&rsquo;re part of the reason Whitehead&rsquo;s glad he&rsquo;s been able to stay in Vilseck since he was 4 years old. Colbert and Johnson are his friends as well as rivals, he said.&ldquo;I&rsquo;ve enjoyed it here,&rdquo; Whitehead said. &ldquo;It&rsquo;s a lot more relaxed. The sprinters here all talk to each other. I don&rsquo;t think you&rsquo;d get that in the States.&rdquo;

CORRECTIONWhitehead's time for the 100-meter run was originally incorrect.