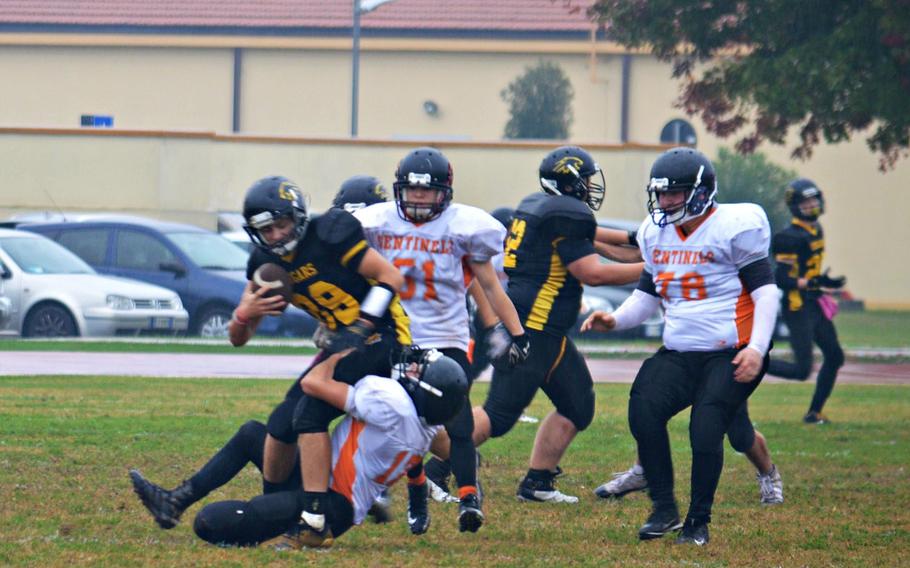 Buy Photo
Players from Vicenza and Spangdhalem attempt to recover a fumble during Saturday's game. The Cougars defeated the Sentinels 39-3. (Norman Llamas/Stars and Stripes) 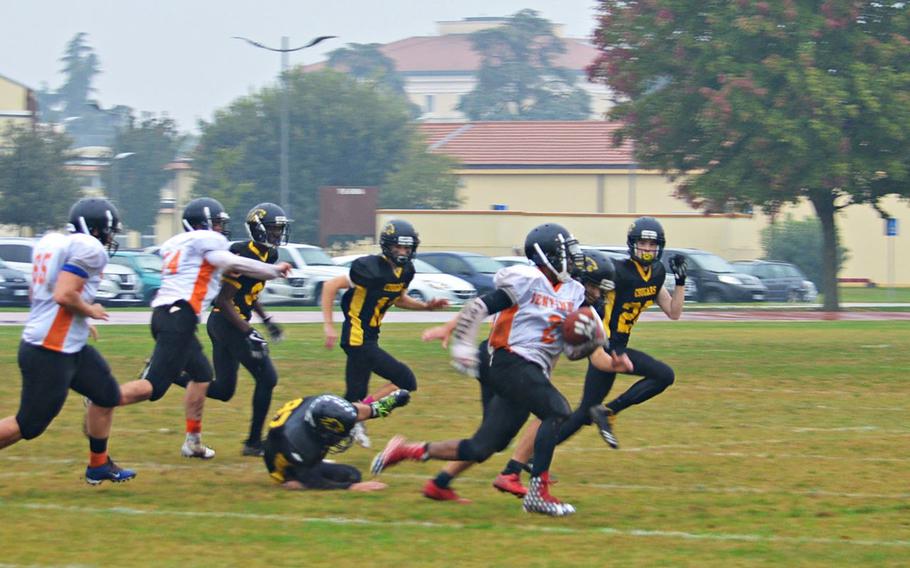 Buy Photo
Spangdahlem running back Javian Rouse runs for a first down during Saturday's game at Vicenza. The Cougars defeated the Sentinels 39-3 during the last game of the 2018 football season. (Norman Llamas/Stars and Stripes) Buy Photo
Lucas Ridgley runs for a first down during Saturday's game. The Vicenza Cougars defeated the Spangdahlem Sentinels 39-3 in a game that was played under heavy rainfall. (Norman Llamas/Stars and Stripes) 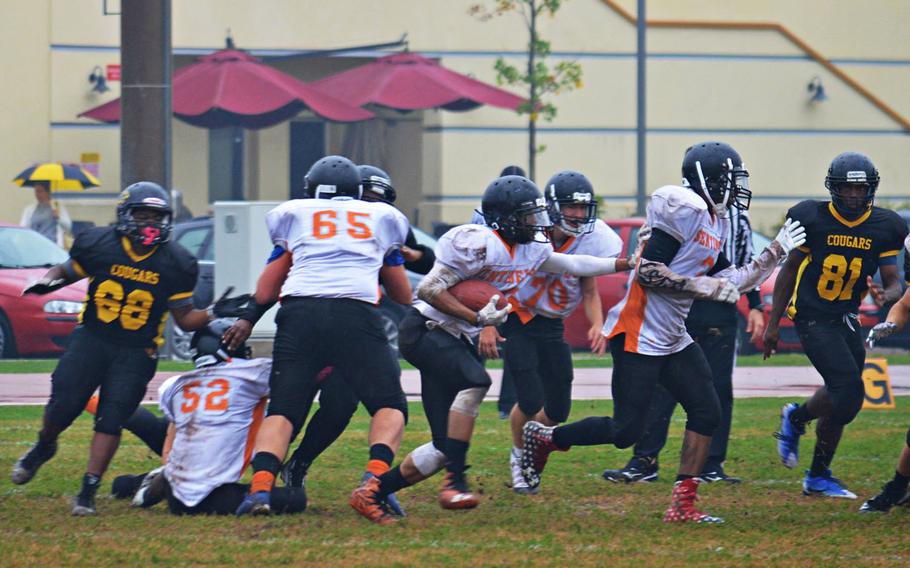 Buy Photo
Spangdahlem running back Deon Montgomery runs for a first down during Saturday's game at Vicenza. The Cougars defeated the Sentinels 39-3 during the last game of the 2018 football season. (Norman Llamas/Stars and Stripes) Buy Photo
Vicenza running back Zach Cohen runs for a touchdown during Saturday's game. The Cougars defeated the Spangdahlem Sentinels by the score of 39-3. (Norman Llamas/Stars and Stripes)

Neither cold weather or the constant rain that lasted through the entire game stopped players from both teams from putting on a good show for the people who braved the conditions.

“Our players are locked-in,” Vicenza coach Jesse Woods said. “We had a few miscues in the first half, but we were able to capitalize on a few of their fumbles so … we’re doing well.”

The Sentinels opened with possession of the ball but couldn’t get much offense going. Vicenza did, driving down to the Sentinels 17-yard line. But the Sentinels intercepted a third-down pass from Vicenza’s Jesse Samsel. Once again, though, they couldn’t move the ball and ended up giving up a safety on a bad snap during an attempted punt.

On the Cougars’ second possession, Samsel came out firing passes to multiple wide receivers. After marching down to the Sentinel 31-yard line, he threw a long pass down the right side to Bryant Horton for a Cougars touchdown. The Cougars failed to convert a two-point try, but were still leading 8-0.

On the ensuing kickoff, the Sentinels’ Deon Montgomery ran the ball all the way to the Cougars’ 6-yard line. Unfortunately for Spangdahlem, the ball was fumbled on the very first play and was recovered by the Cougars.

On the next play, Samsel again found Horton open on the right side and the speedy wide receiver took it all the way down the field for another Cougar touchdown. Despite another failed conversion, the Cougars improved their lead to 14-0.

In the waning moments of the first quarter, the Sentinels got a chance to put points on the board. After yet another lost fumble, Spangdahlem picked off a pass at the Cougars 6-yard line. Three plays later, they settled for a field goal to begin the second quarter.

The Sentinels defense played strongly in the quarter and was able to hold the Cougars to just one touchdown.

In the second half, the Sentinels defense put up a good fight, especially in the fourth quarter where they didn’t give up any points. Unfortunately, the Spangdahlem offense was never able to get the ball into the end zone. Despite moving the ball up and down the field, they turned the ball over a total of six times.

The Cougars took advantage of their bigger size by scoring three additional touchdowns. During the third quarter, the Cougars returned a Sentinel fumble for a touchdown, ran for another and capped it off with Samsel hooking up with Horton yet again.

The fourth quarter was dominated by the defense of both teams.

“This was a rough game,” said Spangdahlem coach Chris Howard. “We hope to extract something positive out of this loss. We are definitely an undersized team. We lost a lot of talent from last year.”

Howard said he hopes to be able to field an 11-player team next year, otherwise the school will be forced to move down to the Division III six-player format.

“Our numbers are not where we want them to be,” Howard said. “Despite all that, we almost beat Naples and we lost a hard one to Rota but, it was the Italian teams that really hurt us this year.”

For Vicenza, the win capped a 4-2 season that had the team just missing the playoffs. “This was a good way to end the season,” Woods said. “All our players worked really hard this year. Especially Lucas Ridgley, who returned a fumble for a touchdown, and Joseph Spencer. He was right where he needed to be all game.”

After reaching the end of this football season, both teams have high hopes for next season but as usual, they both know that the off-season means they will lose some of their talent.

“I’m losing some key players this off-season,” Woods said. “However, we think that we’re going to be OK as we look to retain at least eight or nine starters from this year.”