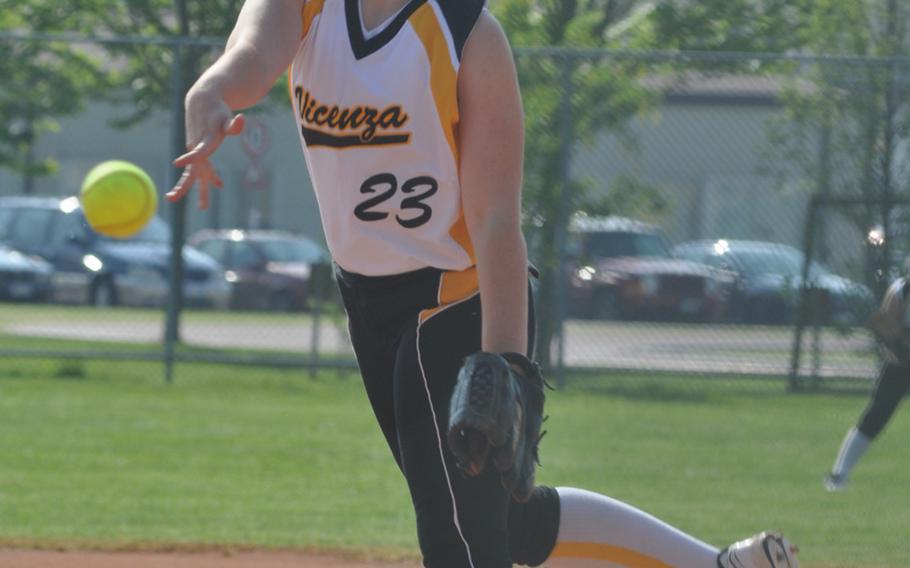 Vicenza's Megan Buffington didn't see a lot of action on the mound Friday. But she was dominant in the three innings she pitched as the Cougars swept a doubleheader from Sigonella, 23-8 and 26-15. (Kent Harris/Stars and Stripes)

VICENZA, Italy – Any discussion about who the top DODDS-Europe softball players are this season has to include Megan Buffington. Any talk about which player is most irreplaceable shouldn’t include anyone else.

Vicenza is among the favorites to win the Division II title this year when its ace, Buffington, is on the pitching mound. But when she’s not? Well, the Cougars are still good enough to beat Sigonella. But if Friday’s games are any indication, they’ll spend a lot more time on the field playing defense.

The Cougars swept the Jaguars 23-8, 26-15, the first game ending in three innings because of the mercy rule and the second because of the time limit after four innings were completed.

There were only two innings where at least one of the teams didn’t send an individual batter to the plate at least twice. If there were a DODDS-Europe record book for such things, Vicenza’s Sarah Weston would probably have her name in it. Not only did she come up to the plate three times in the second inning of the second game, but she got a hit each time.

“The second inning of each game was what killed us,” Sigonella coach Steve Larson said. Vicenza scored 18 times in that inning of the first game, and almost matched it with 17 more in the second contest.

But those lengthy innings, which included 19 walks, 12 hits and eight errors, probably helped Sigonella see less of Buffington than it normally would.

The junior right-hander struck out all six of the batters she faced in the first game before moving to third base. After playing third again in the second game, she closed it out striking out two of the three batters she faced. Sigonella’s Katelyn Eastin earned a victory of sorts by putting the ball in play with a ground ball to first.

Larson could only laugh when Buffington took the mound with his team needing a 12-run rally.

“You hit a home run,” he jokingly told Buffington during her warmups. “You’re not allowed to pitch anymore.”

Buffington’s home run – a grand slam – came in the top of the third. She was taken out for a pinch runner each time she reached base. Otherwise, she might have scored eight times. She drove in seven runs on the day.

But Vicenza coach Julie McClellan said her team is more than one player. And she said that three other pitchers got valuable experience Friday. Sigonella put up 23 runs in the four innings that Buffington didn’t pitch, taking advantage of 18 walks and four hit batters.

“Everyone hit the ball and we had smart base running,” she said. “And that’s what we’ve been trying to work on.”

Weston drove in six runs with four hits in the second game. Cynthia Goodwin and Elizabeth Cates each plated three in the first game, with Mia Dilmar, Nina Tarr and Max Martinez each driving in two. Catcher Sydney Moore had a three-run triple for Sigonella in the opener and freshman pitcher Payton Buss had two of the team’s three hits in the second game.