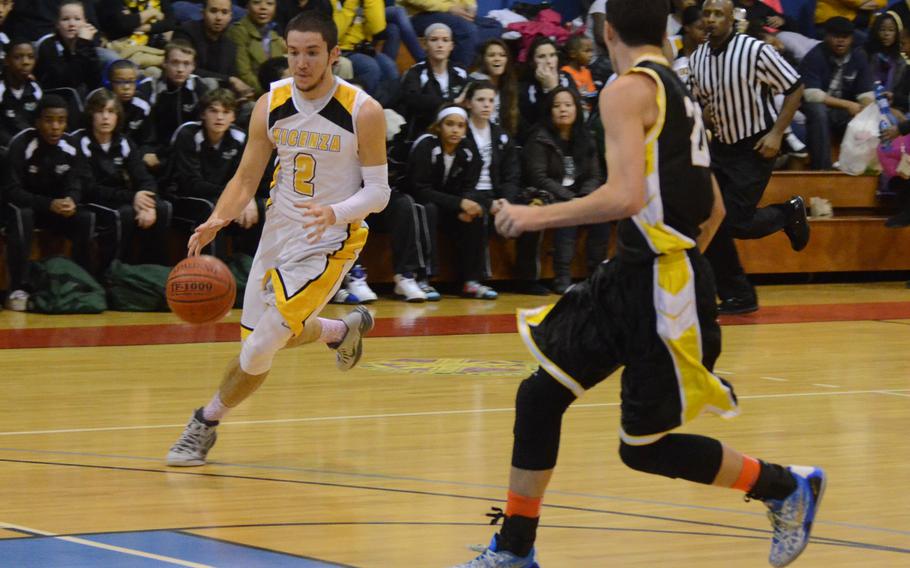 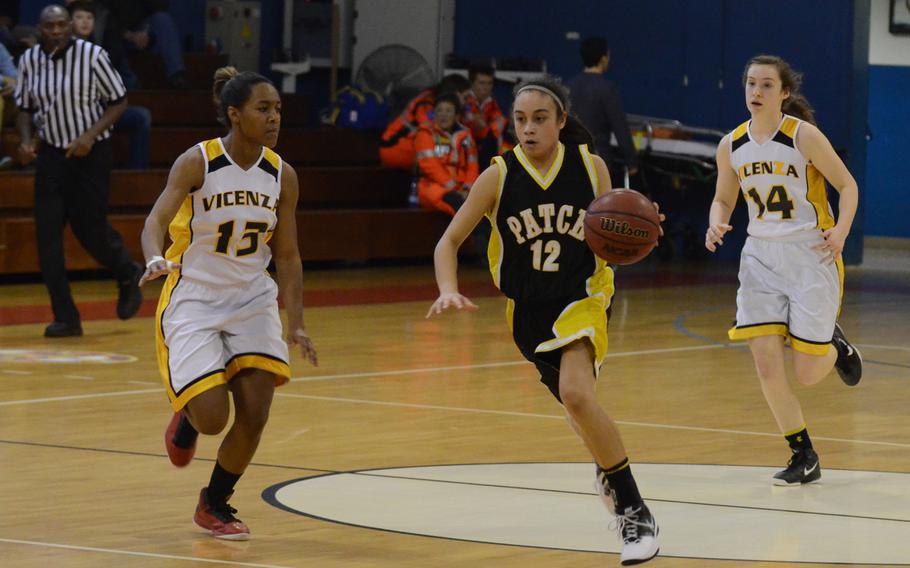 Patch's Marissa Encarnacion works her way to the net past Vicenza's DeAsia Fairley and Emma Knapp during a game at Vicenza, Italy. Patch won 50-30. (Jason Duhr/Stars and Stripes) 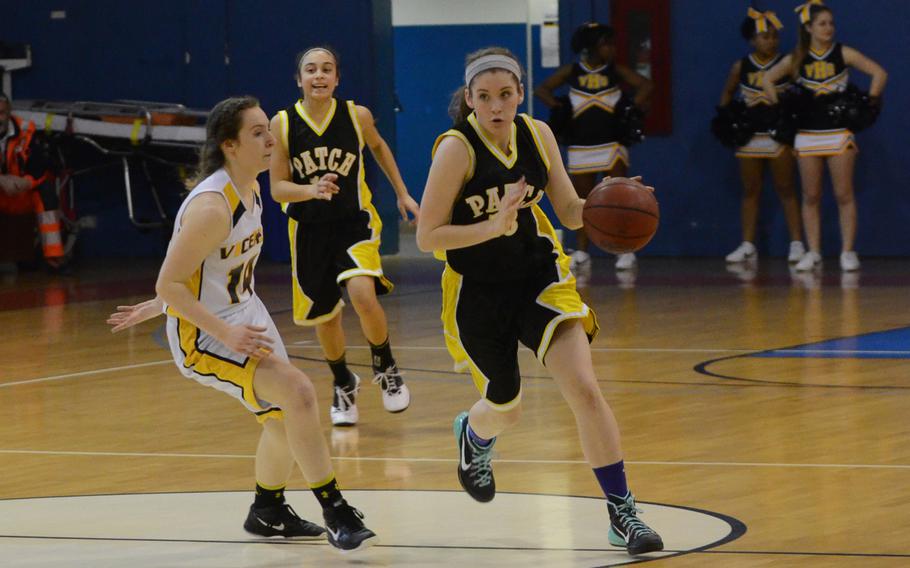 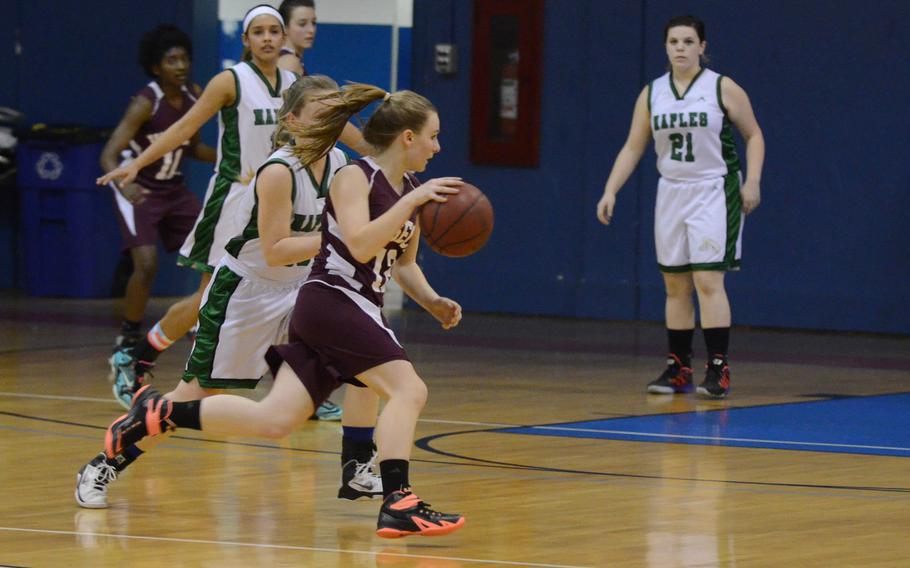 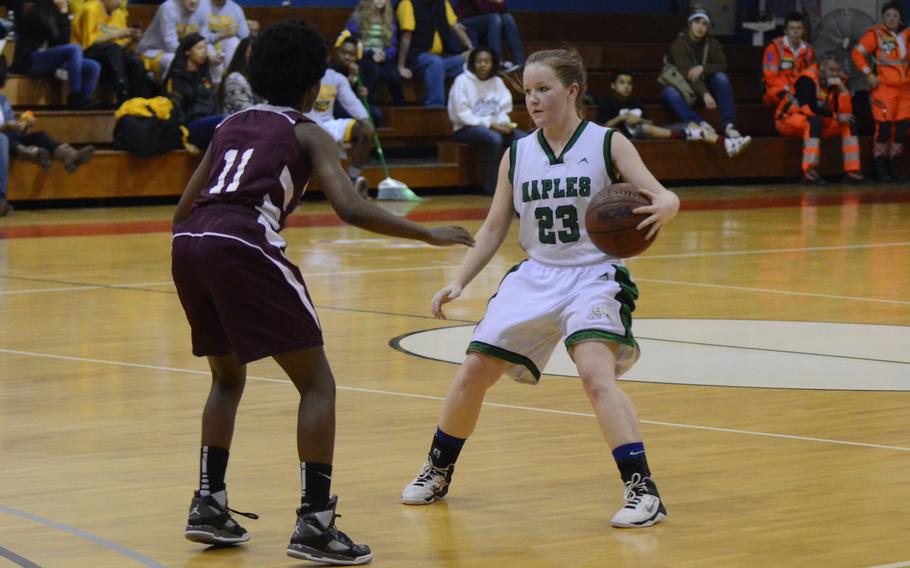 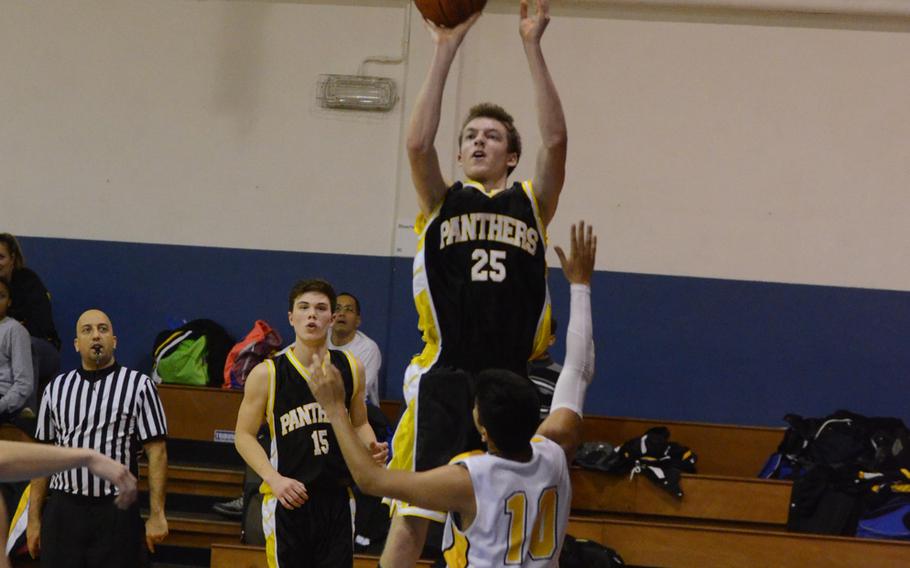 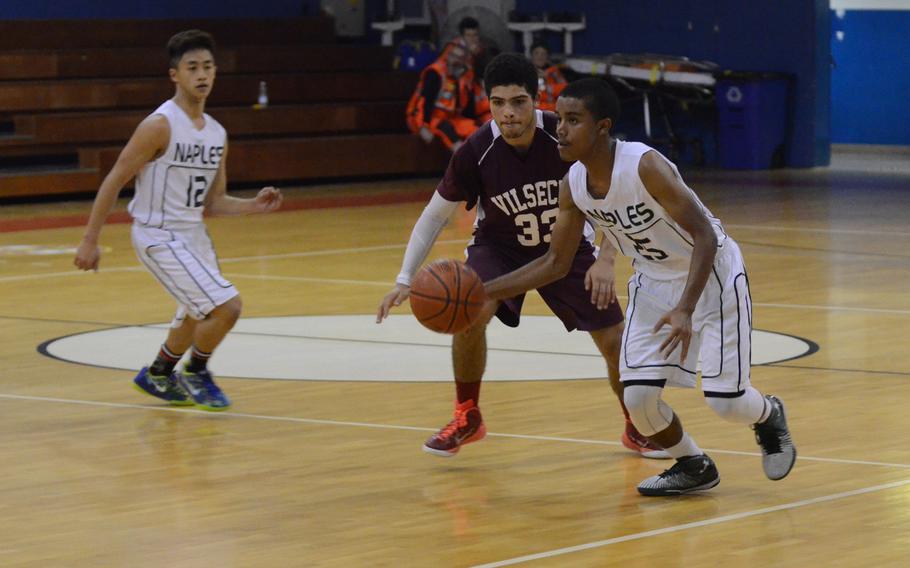 VICENZA, Italy – Boys and girls basketball teams from Vicenza and Naples took turns Friday experiencing the rough currents that come with playing against larger schools such as Patch and Vilseck.

Only one of the teams came out on top: the Naples girls edged Vilseck.

Naples girls 31, Vilseck 29: It was no easy task as the Wildcats and Falcons closed out the third quarter tied at 19. From that point on it was a free-throw battle that could have gone in favor of either team.

“It was a great game,’’ Vilseck coach Adrian Crawford said. “But at the end we made too many little errors, mainly free throws.”

The Falcons managed to sink 13 of their 25 free throw attempts, which is statistically better than the Wildcats, who accounted for 13 of 28.

Abby Lynch gave the team from Italy a cushion with 6 seconds left, scoring her only in the process.

“To win games you have to finish opportunities,” Crawford said.

Winless Vilseck provided plenty of competition for Naples and it’s only going to get tougher.

“I enjoyed the competition, but it’s going to be harder down the road,” Naples coach Tim Smith said. “You have more teams that are better.”

Vilseck boys 68, Naples 54: The Wildcat boys didn’t fare so well against the Falcons, who managed to keep the ball and game under control until the very end.

“Our best game of the season from start to finish,” Vilseck coach John Sabala said. “We didn’t let it get out of control.”

The Falcons surged gradually ahead each of the first three quarters, before The Wildcats closed the gap a bit in the fourth.

“We had to adjust in the second-half to mitigate him scoring on us,” Sabala said.

“We learned a lot from a team who outshot us and out played us,” Naples coach Craig Lord said.

“It was what I expected it to be,” Lord said. “But I didn’t expect to lose – I thought we played hard till the very end.”

Patch girls 50, Vicenza 30: As the first game of the night concluded, Vicenza coach John Kohut had a few things to say about playing in Division I, but one comment stood out.

“The quality and talent is obviously a lot better.”

After a first quarter that started off and ended as if this game was going to be close, tied at 12, Patch coach Melody Green got a little worried.

“When they started to pressure the ball it made it tough,” Green said. “Then they continued to hit free throws.”

It took coach Green a few tries before she could come up with a solid plan and player combination to work.

“We really have a strong team, so I kept subbing out until I found the right combination,” Green said. “And once they gelled, we did really well on defense.”

The Panthers controlled the ball through the second and third quarters, only allowing the Cougars to score two points in each quarter.

Patch boys 78, Vicenza 50: Patch has reigned over Division I for two straight years and is currently 4-0 after routing the Cougars.

“These guys are loaded with talent,” Vicenza coach Jesse Woods said of the Panthers.

Robert Braswell pulled down rebounds and scored in a variety of ways - sliding in under the basket for eight field goals, hitting a couple of threes and making five of his six free throws.

“We got on top of them really fast, but they came back strong and made it a good basketball game,” Patch coach Brad Rehwaldt said.

But Rewaldt knew what he had to do in order to combat the Cougars attempt at closing the gap.

“When they were making their run in the third quarter we had to slow it down and play our game.”

The Cougars scored 20 points to Patch’s 15 and coach Woods “felt good about the third quarter,” but isn’t so sure about the rest of the opponents the team will face in Division I.

“If all the other teams are like this, we’re in trouble, but we can compete,” Woods said.