US wins its Schweitzer tourney opener over Greece, 76-63 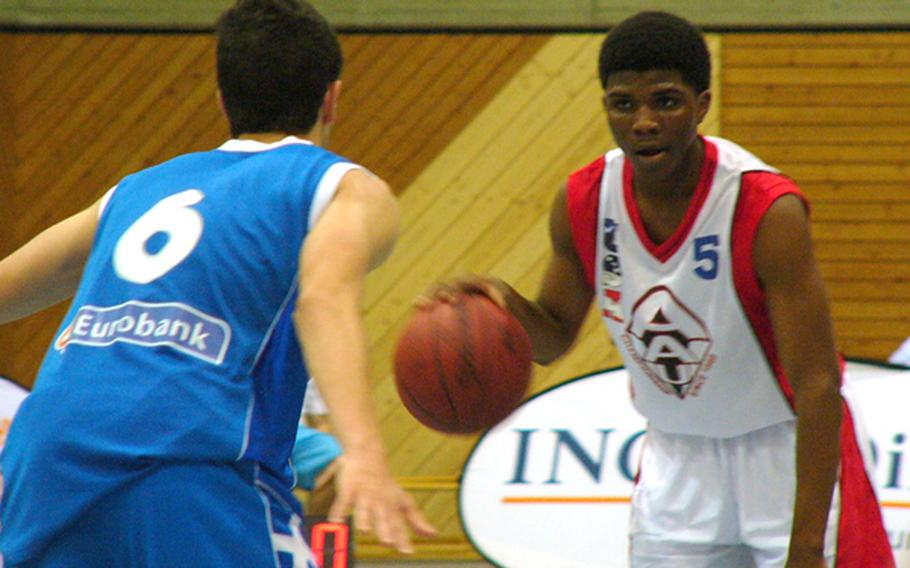 VIERNHEIM, Germany &ndash; Playing a strange game with virtual strangers for teammates, in a country they saw for the first time on Tuesday, the 2012 U.S. team made itself right at home Saturday night with a 76-63 victory over Greece in its pool-play opener of the 26th Albert Schweitzer International Youth basketball tournament.

&ldquo;We started using our heads, instead of just reacting,&rdquo; said first-time U.S. coach Eddie Ford after the Americans erased a 24-14 first-quarter deficit by holding the Greeks to just 22 points in the second and third quarters.

The feat was all the more impressive given that the Americans were introduced to each other for the first time at the Dallas Airport last Tuesday and were playing against the junior national team of Greece, which has won this biennial event twice since 2002.

&ldquo;We got to practice just twice when we got here,&rdquo; Ford said of his team&rsquo;s genesis. &ldquo;We&rsquo;ve been adjusting to the rules and adjusting to ourselves, finding out just what each player can do.&rdquo;

One thing they could do Saturday night was play suffocating half-court team defense. A Greek team which rode open cutters to the basket and treys to the double-digit first-quarter lead found the going much tougher after the first 10 minutes. In the game-changing second and third quarters, the Americans forced the Greeks to turn the ball over seven times and gained possession another time on a shot-clock violation brought about by the defensive effort.

The defense allowed the Americans to mount a 12-6 run over the final 3:24 of the first half to cut their deficit to 35-31 and to open the second half with a 10-0 run that put them ahead to stay.

Austin Nichols of Memphis, who ended the game with 17 points, converted a three-point play off an assist from 16-point scorer Stevie Clark of Oklahoma City to highlight the run. The play gave the Americans their first lead, 36-35, since the game&rsquo;s opening seconds, when they led 1-0.

&ldquo;We grew up a lot tonight,&rdquo; Ford said about the turnaround by a team which had been outgunned 93-66 in a Wednesday-night scrimmage against the Under-18 German national team. &ldquo;We found out what we had to do.&rdquo;

Darryl Hicks of Louisville led the U.S. scoring with 20 points, but the remarkable story for the U.S. on Saturday night was its 22-8 advantage in second-chance points and its 28-0 edge on the fast break. The Americans out-rebounded the taller Greeks, 41-38 &ndash;13-11 on the offensive glass &ndash; and even outscored them, 32-28, in the paint.

Next up for the Americans in their quest for their first gold medal since 1996 and their first medal of any color since a bronze in 2000, is Denmark, which lost 75-46 to Serbia in its Saturday opener. The Americans are to play the Danes at 8 p.m. Sunday and the Serbs at 8 p.m. Monday, both at the Waldsporthalle here. The top two teams from the four-team pool advance to Wednesday&rsquo;s quarterfinals.

&ldquo;We have a long way to go,&rdquo; Ford said, &ldquo;but we&rsquo;ll get better every game.&rdquo;

No one who saw Ford&rsquo;s team grow in the final 30 minutes of Saturday&rsquo;s game is prepared to dispute that prediction.