US falls to Italy in Schweitzer hoop finals 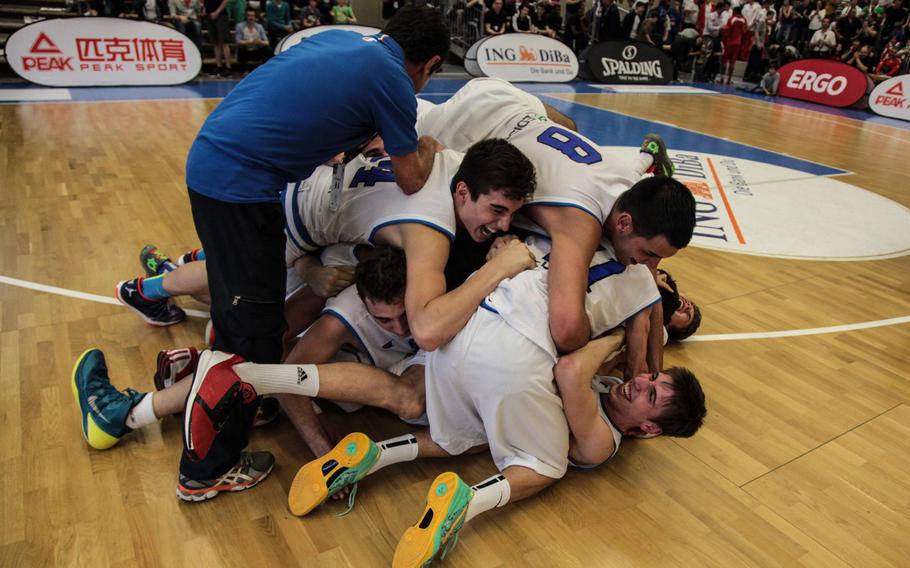 Team Italy celebrates after beating the U.S. 86-73 in the final of the Albert Schweitzer basketball tournament Saturday, April 26, 2014, in Mannheim, Germany. (Matt Millham/Stars and Stripes)

Team Italy celebrates after beating the U.S. 86-73 in the final of the Albert Schweitzer basketball tournament Saturday, April 26, 2014, in Mannheim, Germany. (Matt Millham/Stars and Stripes) 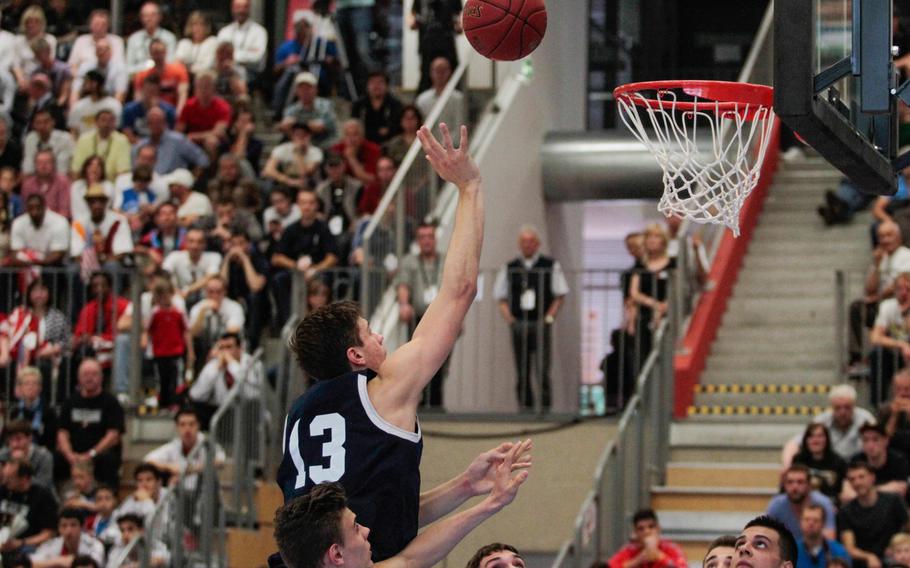 American Ethan Happ of Taylor Ridge, Ill., tips a bucket in during the first half Saturday, April 26, 2014, of Team USA's final against Italy in the Albert Schweitzer Tournament in Mannheim, Germany. Happ scored 20 points and had 11 rebounds, but it wasn't enough to overcome a lead the Italians built in the second half to fell the U.S. 86-73. (Matt Millham/Stars and Stripes) 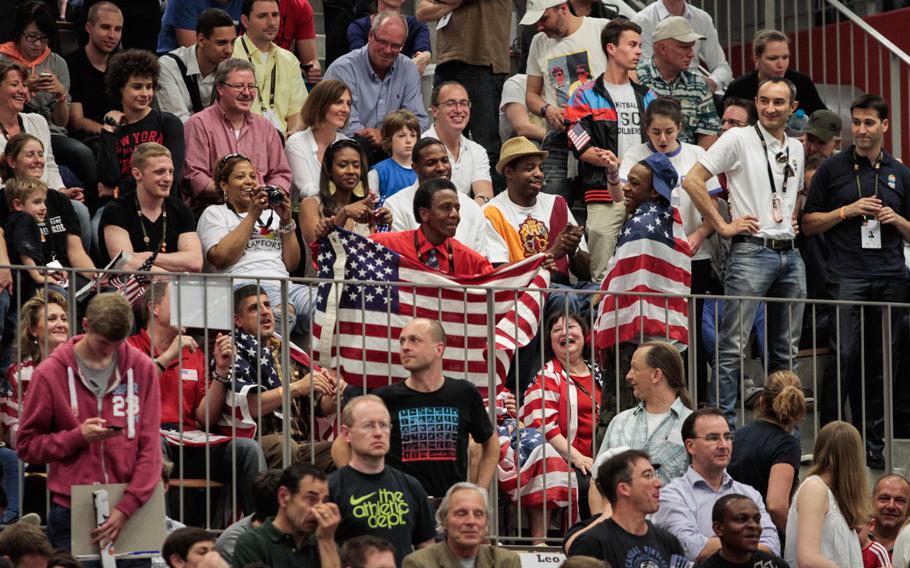 Fans of Team USA cheer for their side Saturday, April 26, 2014, in the final of the 2014 Albert Schweitzer Tournament in Mannheim, Germany. The U.S. lost to Italy 86-73 after giving up an early lead. (Matt Millham/Stars and Stripes) 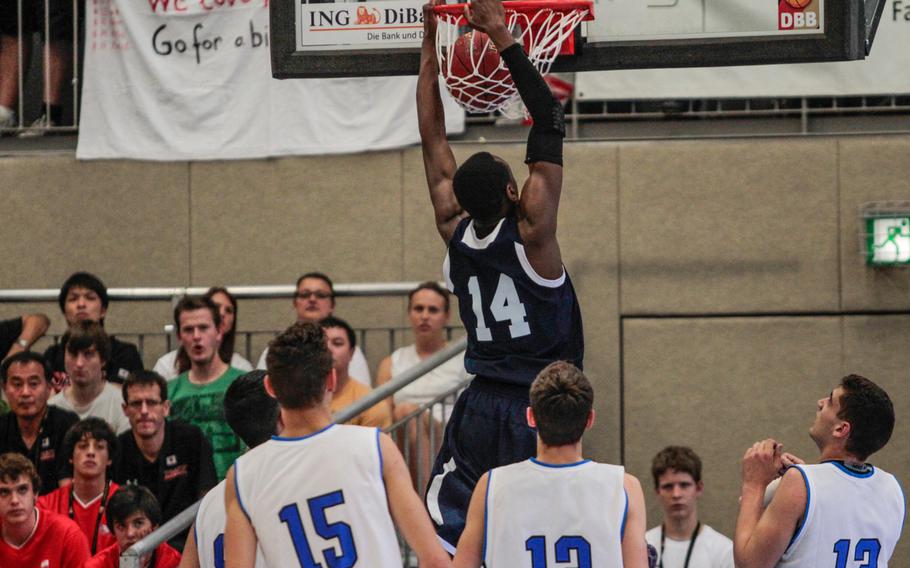 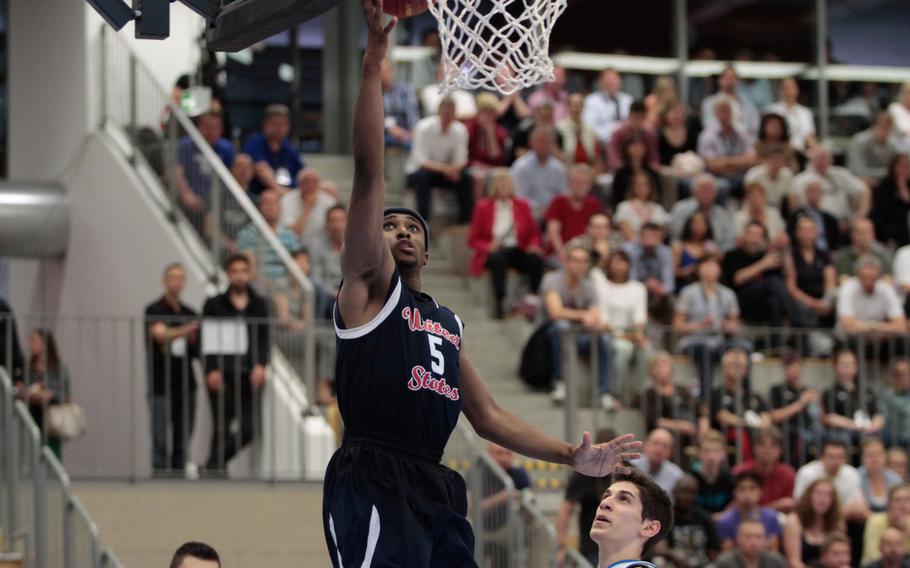 American Austin White of Jersey City, N.J., scores on a fast break in the final game of the Albert Schweitzer tournament against Italy in Mannheim, Germany, Saturday, April 26, 2014. White scored on two fast breaks to keep the U.S. in contention, but it wasn't enough to overcome a lead the Italians built in the second half to beat the U.S. 86-73. (Matt Millham/Stars and Stripes) 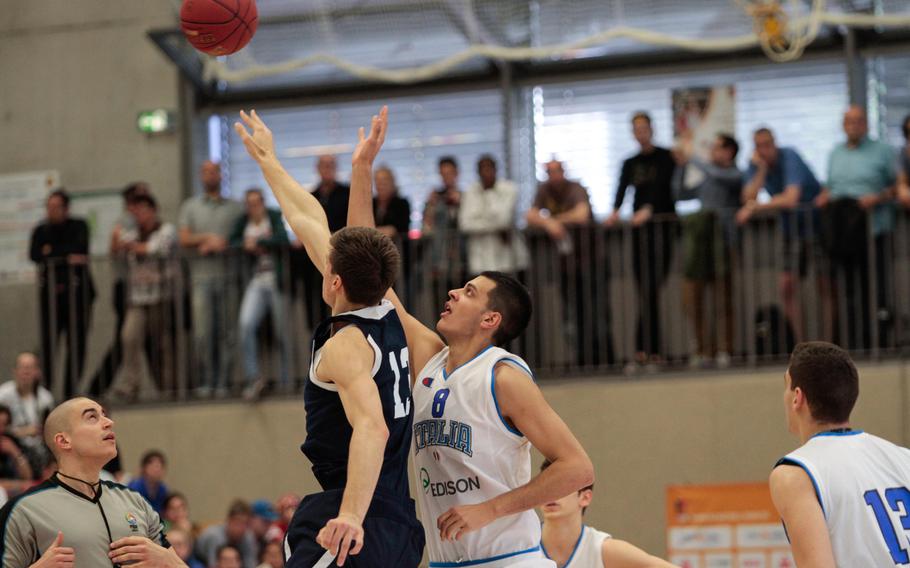 American Ethan Happ of Taylor Ridge, Ill., wins the tip-off in the Albert Schweitzer final against Italy in Mannheim, Germany, Saturday, April 26, 2014. Happ scored 20 points and had 11 rebounds, but it wasn't enough to overcome a lead the Italians built in the second half to top the U.S. 86-73. (Matt Millham/Stars and Stripes)

MANNHEIM, Germany – The 12 young men who represented the United States in the 2014 Albert Schweitzer Tournament will return stateside with lifelong memories of the things they experienced and accomplished.

But in the immediate aftermath Saturday, it was hard to get past the one thing they didn't.

America's stirring run in the 16-country, under-18 boys basketball tournament fell short on Saturday at GBG Halle as Italy pulled away for an 86-73 victory in the tournament title game. The loss was the first of the tournament for the U.S.

With a strong first half in the books and a 41-35 lead to show for their efforts, the Americans looked poised to finish their unbeaten run through the bracket and lay their collective hands on the country's first Schweitzer title since 1996. The Italians, just two days removed from a loss to the U.S., had other ideas.

Italy stunned the confident Americans with a flurry of 14 unanswered points out of the halftime locker room. The U.S. spent the balance of the third quarter attempting to recover from the shocking rally, and finally did so when Scott Lindsey tossed in a buzzer-beating halfcourt shot that knotted the score at 61 entering the final 10-minute quarter.

The momentum, however, remained squarely on the Italian side. Italy built a 72-67 lead four minutes into the final quarter; a corner three-pointer by Daniel Donzelli with 90 seconds remaining pushed the lead to seven points and essentially iced the game. The dazed American team pulled at their jerseys, consoled each other and stared at the scoreboard and dwindling clock in disbelief as the final seconds ticked away.

"A tie game going into the fourth quarter; I think we would have taken that," United States coach Mike Olson said. "It was a 10-minute game. They outplayed us in those 10 minutes."

Olson, the head coach at Kimball Union Academy in New Hampshire, added that the Italian team enjoyed a level of familiarity that the hastily-assembled American squad couldn't match.

While the Saturday-to-Saturday tournament didn't offer enough time for the players to fully develop their on-court chemistry, the disparate group was able to establish new friendships. The team's week-long German adventure included a visit to nearby Heidelberg and its famed castle, offering the chance to build relationships that transcend the sport they share.

"It was great to have a day off and bond with the guys," starting forward and Wisconsin signee Ethan Happ said. "We've become really close, so it's going to be hard to say our goodbyes."

Mike Williams, a sharpshooting guard from New York City and a Rutgers commit, sat on a table along press row after the game and signed autographs for a group of young fans. Later, he marveled at the raucous crowds that packed the German gyms throughout the tournament.

"The fan base over here is crazy," Williams said. "I love it out here." Though their title dreams were dashed, this squad of American high-school stars and NCAA prospects can take solace in reestablishing the U.S. among the elite in a prestigious tournament the nation once dominated.

Many followers of international basketball regard the Schweitzer tournament, played roughly every two years since 1958, as an unofficial world championship for under-18 boys basketball. The event counts past and present NBA stars Magic Johnson, Vince Carter, Toni Kukoc, Dirk Nowitzki, Tony Parker and Tim Duncan among its prominent alumni.

America has won the Schweitzer crown 10 times, by far the most of any country. But the U.S. hadn't so much as reached the tournament's title game since 1996, when it claimed the last of six straight titles. The Americans finished seventh in 2012, the last time the event was held. The 2014 American squad nearly ended that two-decade drought. The U.S. swept through group play, defeating Chile, France and Ukraine over the tournament's first three days. A Wednesday win over defending champion Spain earned the U.S. a spot in the tournament's final four, and an 84-76 defeat of Italy on Thursday set up a Friday semifinal with Serbia. The Americans won that game 74-68 to arrange Saturday's ill-fated title-game rematch with the Italian squad.

Long after the sting of Saturday's loss subsides, however, the members of the United States teams will carry the memories of their week in Mannheim.

"Personally, this is one of the best experiences that I'm ever going to have in my life," Happ said.

Happ matched Italy's Federico Mussini for game-high scoring honors with 20 points and pulled down a game-best 11 rebounds. Williams scored 17 and Shavar Newkirk added 13 for the U.S.