Unbeatens to clash with European title on the line 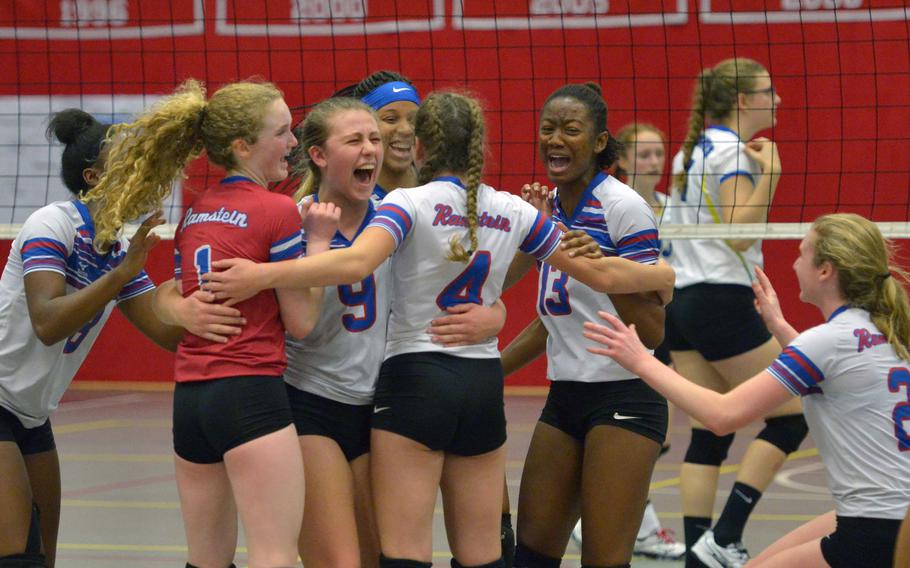 The Ramstein Royals celebrate their 25-10, 25-19, 25-19 Division I semifinal win over Wiesbaden at the DODEA-Europe volleyball finals in Kaiserslautern, Germany, Friday, Nov. 2, 2018. The Royals will face Stuttgart in Saturday's final. (MICHAEL ABRAMS/STARS AND STRIPES)

The Ramstein Royals celebrate their 25-10, 25-19, 25-19 Division I semifinal win over Wiesbaden at the DODEA-Europe volleyball finals in Kaiserslautern, Germany, Friday, Nov. 2, 2018. The Royals will face Stuttgart in Saturday's final. (MICHAEL ABRAMS/STARS AND STRIPES) 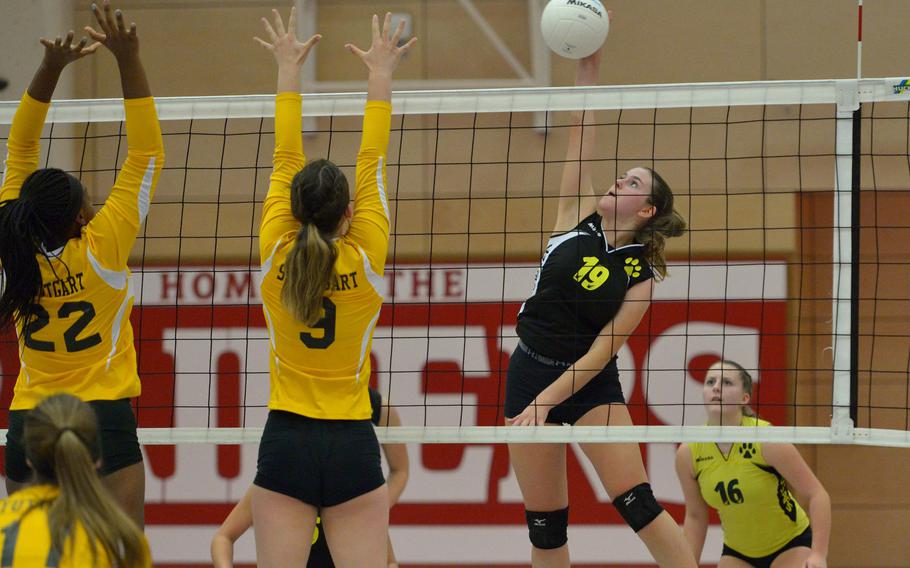 Vicenza's Madeline Mollner hit the ball against the Stuttgart block of Skye DeSilva Mathis, left, and Audrey Moeding. The Panthers beat the Cougars 34-31, 25-14, 25-14 to advance to Saturday's Division I final against Ramstein. (MICHAEL ABRAMS/STARS AND STRIPES) 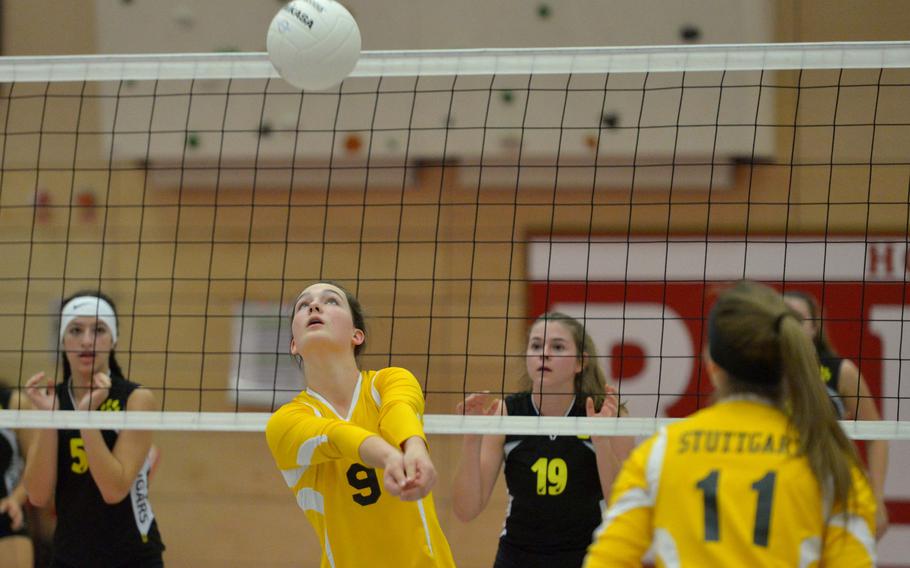 Stuttgart's Audrey Moeding bumps the ball in a Division I semifinal at the DODEA-Europe volleyball finals in Kaiserslautern, Germany, Friday, Nov. 2, 2018. Stuttgart beat the Cougars 34-31, 25-14, 25-14 to advance to Saturday's final against Ramstein. (MICHAEL ABRAMS/STARS AND STRIPES)

KAISERSLAUTERN, Germany -- The matchup that’s been a whole season in the making has finally been made.

The Stuttgart Panthers and Ramstein Royals crushed their respective semifinal opponents Friday and will meet Saturday in the 2018 DODEA-Europe Division I girls volleyball championship match, the first time the two unbeaten powerhouses will share a court in the regular season or postseason this fall.

Stuttgart overwhelmed third-seeded Vicenza in the two fast-moving sets that followed the extended, exciting opener, earning their fourth straight trip to the European championship match in the process.

“We were all in our heads. We all get a little nervous,” Carly Sharp said of the Panthers’ less-than-ideal start to the semifinal. “We knew this was a big game.”

That early scare set the favored Panthers back on track, and they spent the balance of the match blasting lasers at a Vicenza squad that couldn’t manage much further resistance.

Vicenza lost to Stuttgart in three sets early in the regular season, but some lineup adjustments and the long win streak that followed that loss had the Cougars optimistic entering the tournament. The team looked solid Thursday in pool wins over SHAPE and Naples and in taking a set from undefeated Ramstein; a 25-18, 25-19 quarterfinal sweep of Vilseck put the Cougars back in the division’s final four for the first time since it lost to Stuttgart in the 2015 European title match.

The Panthers are looking to restart their European title reign after their two-year title streak ended with a 2017 title-game loss to Lakenheath. Stuttgart beat Ramstein for the second of those consecutive championships, a 25-18, 25-19, 25-23 sweep in the 2016 final.

Ramstein def. Wiesbaden 25-10, 25-19, 25-19: The Royals carried out a premeditated elimination of the Warriors, part of a tournament-long effort to win the serve, dictate the action and finish points emphatically.

Ramstein’s Masaya Archbold said the team’s overarching goal this week is to “put the ball down and get the next point,” summarizing the proactive approach as “the ethic to be a great team.” Great was as good a word as any to define the dominance of the Royals, who set the tone with a first-set blowout and steadily outclassed the Warriors to secure the sweep.

“We knew what it took to take this win, and we beat them in three sets,” said Archbold, who totaled 10 kills and four blocks against Wiesbaden. “Honestly I couldn’t be more proud of our team and our coaches.”

Fifth-seeded Wiesbaden was among the more impressive teams in the tournament before running into a preternaturally focused Ramstein squad, sweeping Vilseck and defending champion Lakenheath and taking one of three sets from Stuttgart. The Warriors reached the semifinals by virtue of a 25-18, 25-22 sweep of Naples in a Friday quarterfinal match.