Two-a-days: Saints have a lot to learn 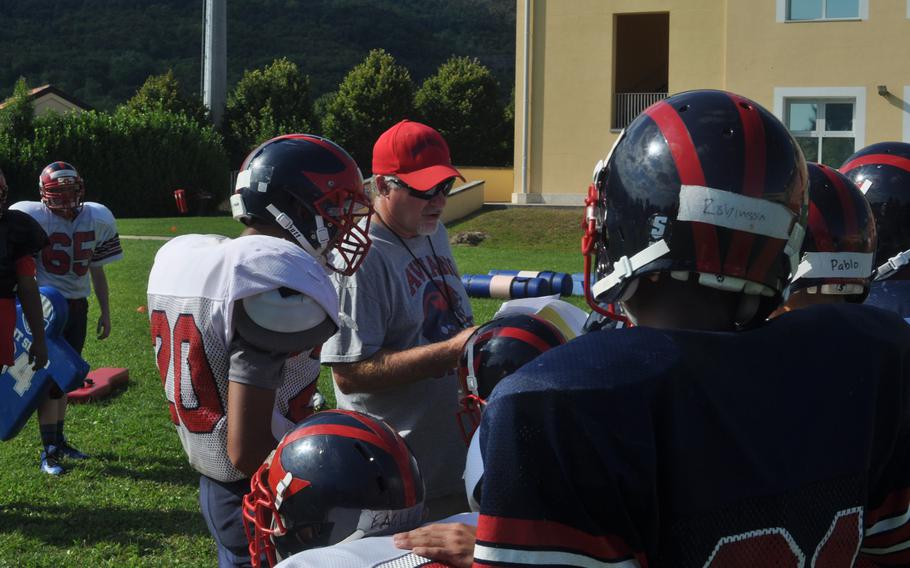 Senior quarterback Hayden Roers, left, and the rest of the first-team offense listen to head coach Rick Dahlstrom describe a play for the Aviano Saints during a recent practice. (Kent Harris/Stars and Stripes)

Senior quarterback Hayden Roers, left, and the rest of the first-team offense listen to head coach Rick Dahlstrom describe a play for the Aviano Saints during a recent practice. (Kent Harris/Stars and Stripes) 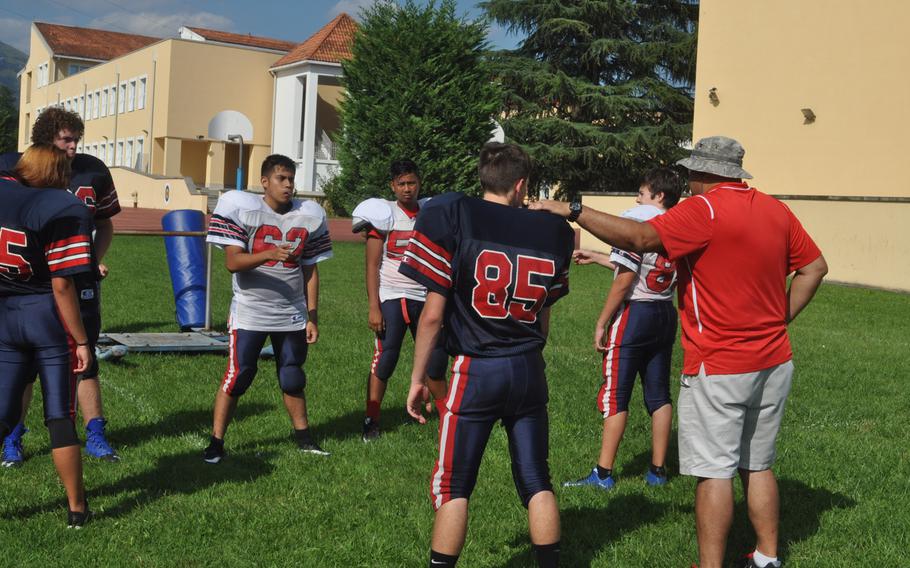 Aviano assistant coach Oliver Herazo has the attention of budding linemen during a recent practice. (Kent Harris/Stars and Stripes) It's football season again at Aviano, with about two dozen players, three coaches and a few assistants spending a few hours each afternoon on the practice field adjoining the school. (Kent Harris/Stars and Stripes) Aviano has never had a head football coach other than Rick Dahlstrom, right, and Ken McNeely. McNeely retired a few years ago and is helping out as a volunteer assistant. McNeely launched the school's program in 1974 and Dahlstrom took over more than a decade ago when McNeely narrowed his focus to basketball. (Kent Harris/Stars and Stripes) 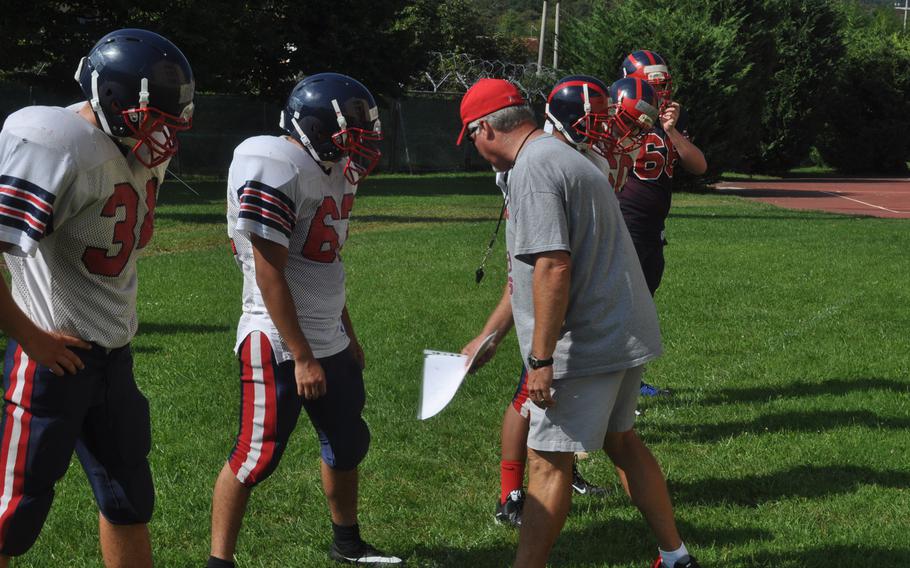 Aviano coach Rick Dahlstrom works on spacing and blocking routes with his offensive line during a recent practice. (Kent Harris/Stars and Stripes) Hayden Roers, one of only three returning starters for the Aviano Saints, fires a pass during a recent practice. (Kent Harris/Stars and Stripes)

Tenth in a series of glimpses at high school football camps around Europe.

When it comes to stability, the Aviano Saints lead the way in DODEA-Europe football - at least in terms of who’s calling the shots on the sidelines.

Head coach Rick Dahlstrom has been on those sidelines for more than a decade now, taking over for Ken McNeely, who founded the program in 1974. McNeely? He’s still helping out as a volunteer, three years after he retired from his positions as teacher, athletic director and basketball coach.

Of course, there’s only so much any coach can control in the ever-changing world of DODEA football, where building up feeder programs doesn’t often help the varsity squad. In fact, there’s often little carryover from a previous season due to the frequent transfer of military families from one part of the world to another.

“At the end of last season, we really thought we weren’t going to have a team this year,” Dahlstrom said. “Because so much of the team wasn’t coming back.”

The Saints return only three starters from a year ago and only a handful more saw any playing time.

Of course, that could be said of just about every position. Fifteen freshmen are wearing more than half the 27 jerseys Dahlstrom is handing out. Roers is one of only two seniors. So Dahlstrom’s goals are somewhat tempered.

“Practice the game of football and teamwork,” he said. “Work together … enthusiasm.”

That last one is already in evidence, he said.

So even as Dahlstrom, McNeely and assistant Oliver Herazo found themselves going over basic techniques and plays that more veteran teams would already have down, there were more smiles than grimaces during a recent practice.

At least until the sprints began on a sweltering August day.