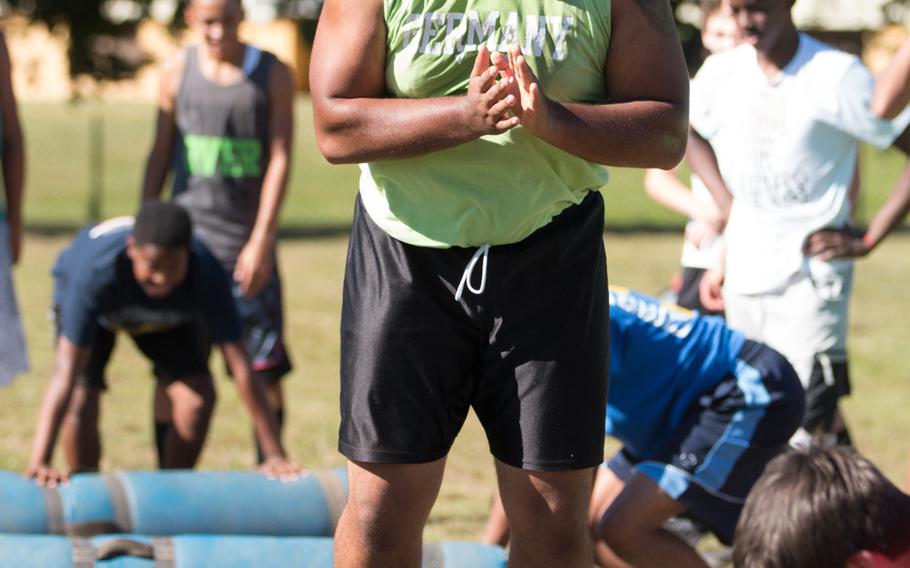 Vilseck senior Derek Davis glowers at the bag as he does burpees during a pre-season football practice held on Friday, Aug. 26, 2016 in Vilseck, Germany. (Michael S. Darnell/Stars and Stripes)

Vilseck senior Derek Davis glowers at the bag as he does burpees during a pre-season football practice held on Friday, Aug. 26, 2016 in Vilseck, Germany. (Michael S. Darnell/Stars and Stripes) 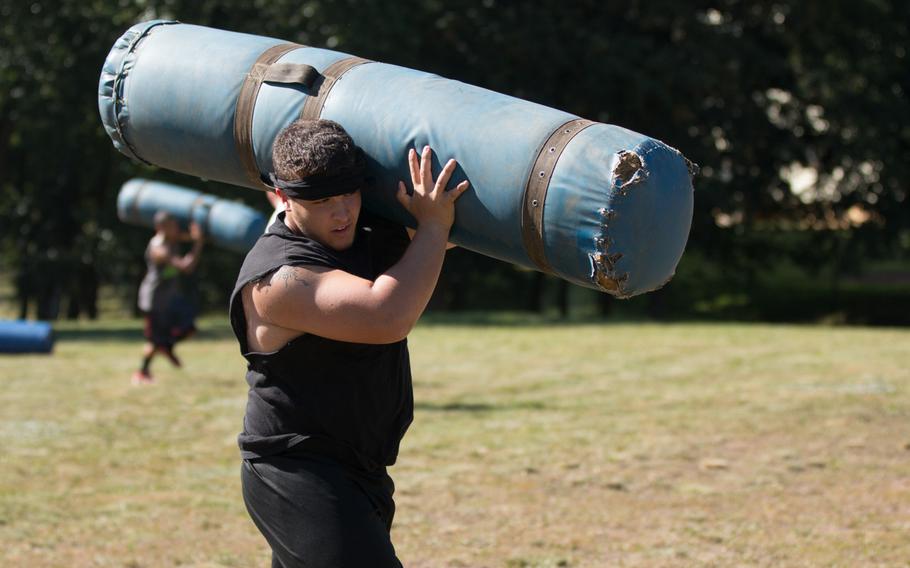 Juan Oestreich easily handles one of the training bags Vilseck's head coach Jim Hall uses during many of his practice sessions. Oestreich spent plenty of time in the offseason working his upper body strength and said during a Friday, Aug. 26, 2016 practice that he's ready to begin the football season. (Michael S. Darnell/Stars and Stripes) 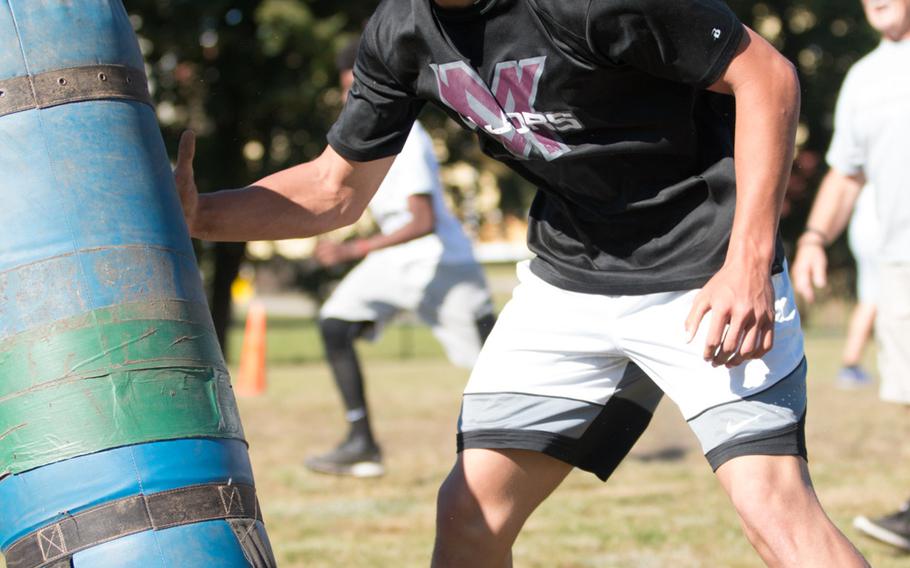 Jim Hall returns as the Vilseck Falcons head coach. During a practice on Friday, Aug. 26, 2016, Hall ran his players through conditioning drills, hoping to have them ready to play by the season opener. (Michael S. Darnell/Stars and Stripes) Vilseck's Armando Pinckney is one of several returners for the Falcons this year. Pinckney, along with about 30 other students showed up on Friday, Aug. 26, 2016, to the final football practices before school began on Monday. (Michael S. Darnell/Stars and Stripes)

Fifth in a series of glimpses at high school football camps around Europe.

VILSECK, Germany – The Vilseck Falcons had to be the most unpredictable team in DODEA-Europe Division I football last year.

They opened their season by tying a Ramstein squad that otherwise ran into very little trouble throughout their championship season. They then dropped games against an underperforming Lakenheath team and Stuttgart, who won only one other game that season.

The cause of the team’s uneven performance is simple, according to assistant coach Mike Ochoa. They lacked the will to close out games, a killer instinct that separates good teams from great ones.

“A lot of it is building up their self-esteem, finding their niche, finding their slot and introducing plays so they’re aware of it,” Ochoa said. The preseason workouts, such as the one the team held on Friday during one of the hottest days of the year, will begin shaping the team’s mental toughness.

“These are the kids who are going to say ‘you should’ve been here last week. You’re going to have to catch up, you’ve got to take my spot,’” Ochoa said.

The team continues to work the tried-and-true methods of football. Head coach Jim Hall, about as fond as fads as a fish is of a desert, still runs his players through tires, has them run special teams plays every practice and continues to favor perfecting form over all else.

Vilseck is welcoming back some talented individuals. All-Europe linebacker Drew Pinckney departed, but his brother Armando remains. Speedster Zavier Scott is returning at wide receiver and looks to have grown a solid foot over the summer.

The Falcons’ quarterback situation is the biggest unknown. Austin Archangel, last year’s surprising passing threat, moved over the summer, leaving former backup Chrystian Mitchell as the starter. Mitchell said he’s ready to show what he can do.

“I’m happy to step out of the shadows,” Mitchell said. “I got to step up and try to win games.”

Pinckney echoed his coach’s assessment: “We’re all about the hunger this year. The seniors are going to have to step up real big year.”

That hunger seems to have taken an almost literal quality as this year’s Falcons’ team dwarfs last year’s. The 2015 Falcons were a scrappy bunch, outperforming their relatively smaller size. Now, they’re bigger.