Top wrestlers move on to compete for titles 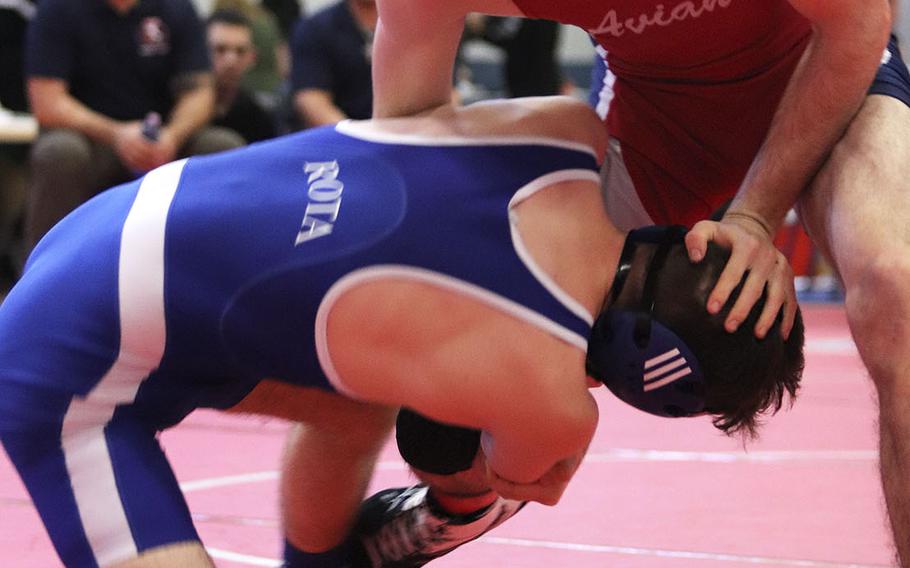 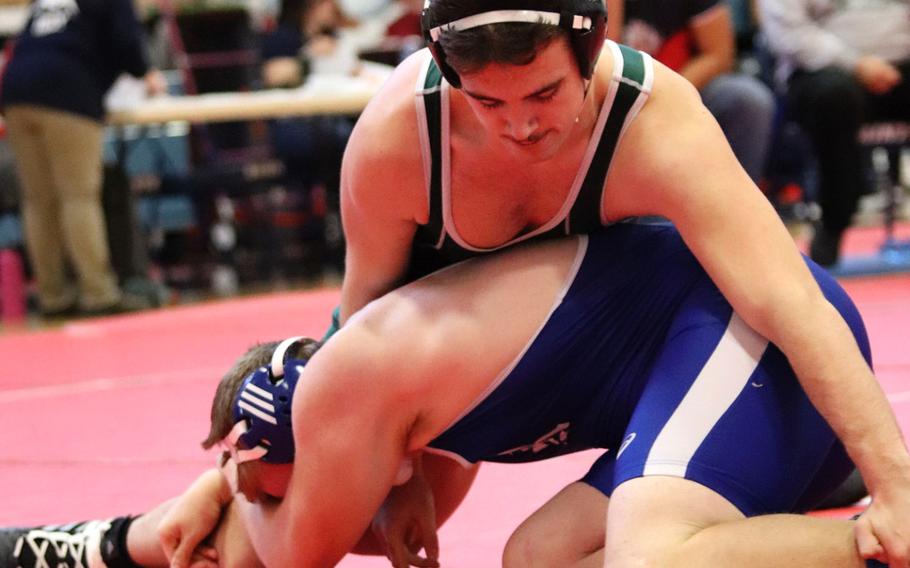 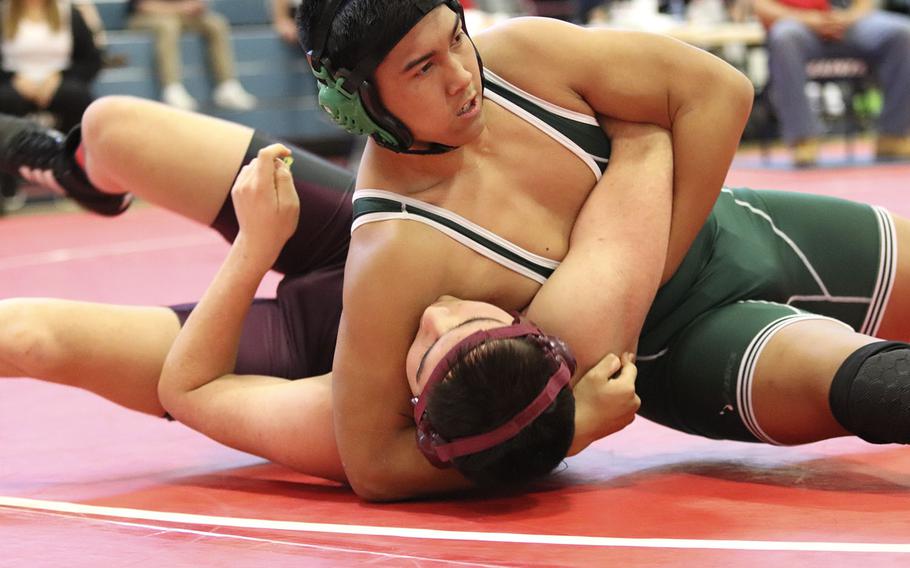 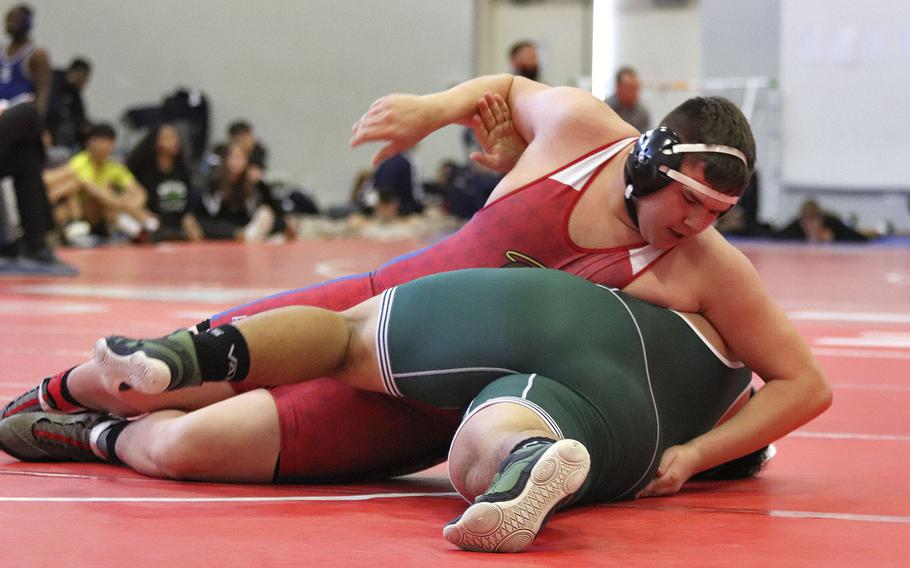 Buy Photo
Jonathen Stagner of the Aviano Saints attempts to better his position against Xzayver Salas of the Naples Wildcats in the 285-pound weight class of Saturday's wrestling sectional held at Aviano, Italy. Stagner won with a score of 4-1. (Norman Llamas/Stars and Stripes) 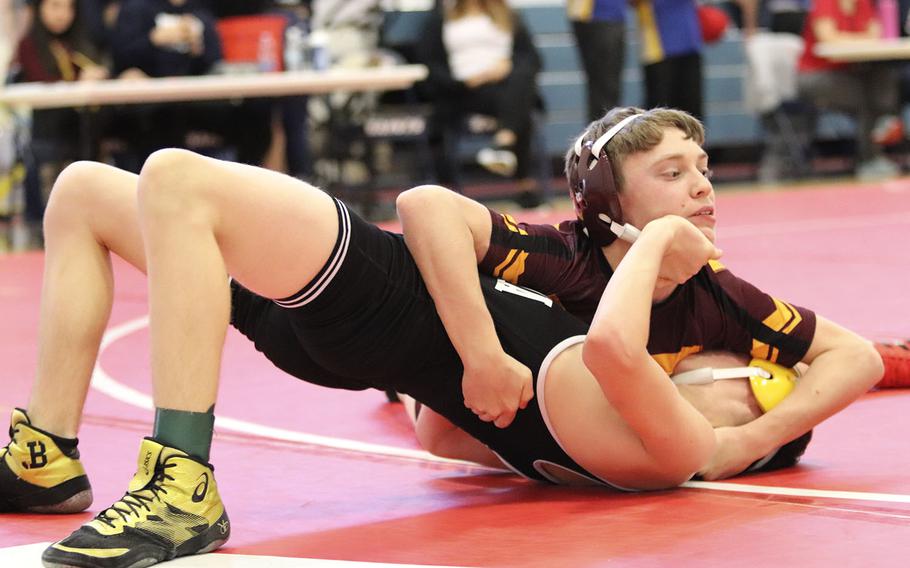 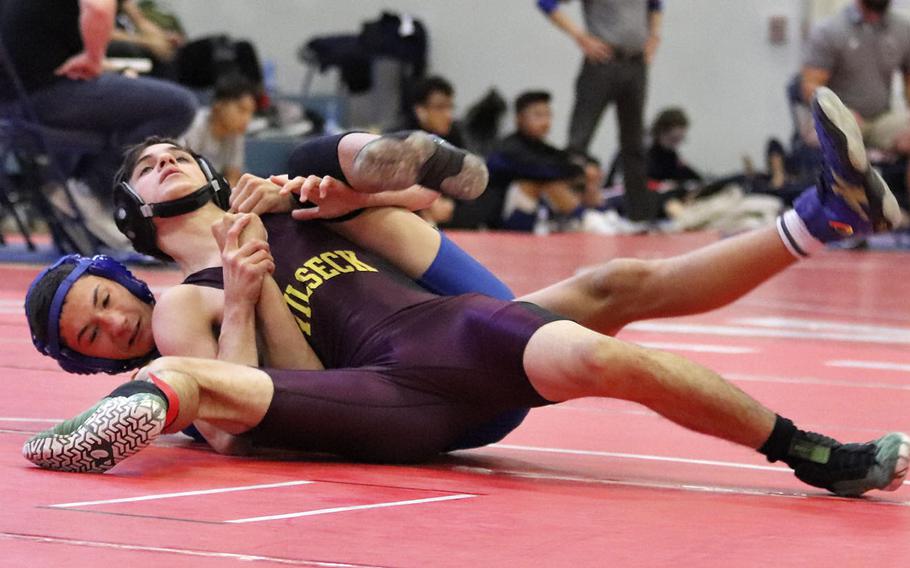 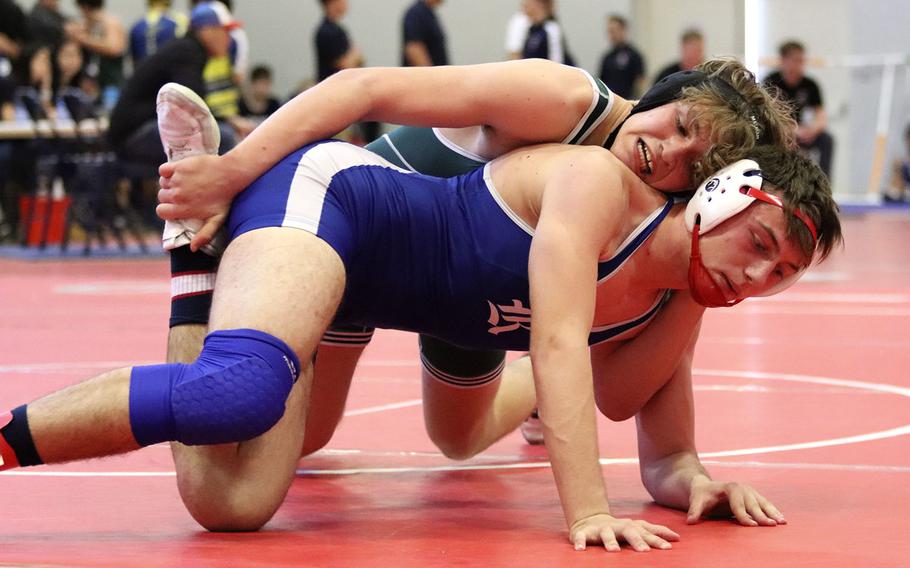 Buy Photo
Naples' Matteo Toliver tries to take down Rota's Vincent Bonavita in the 160-pound, third place matchup of Saturday's wrestling sectional held at Aviano, Italy. Tolliver was able to pin Bonavita for the win and the third-place finish. (Norman Llamas/Stars and Stripes) 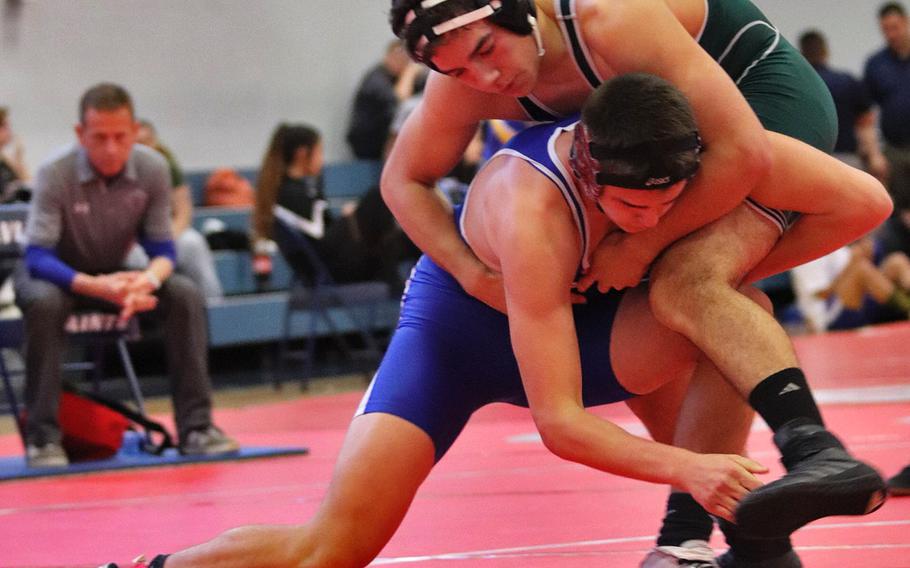 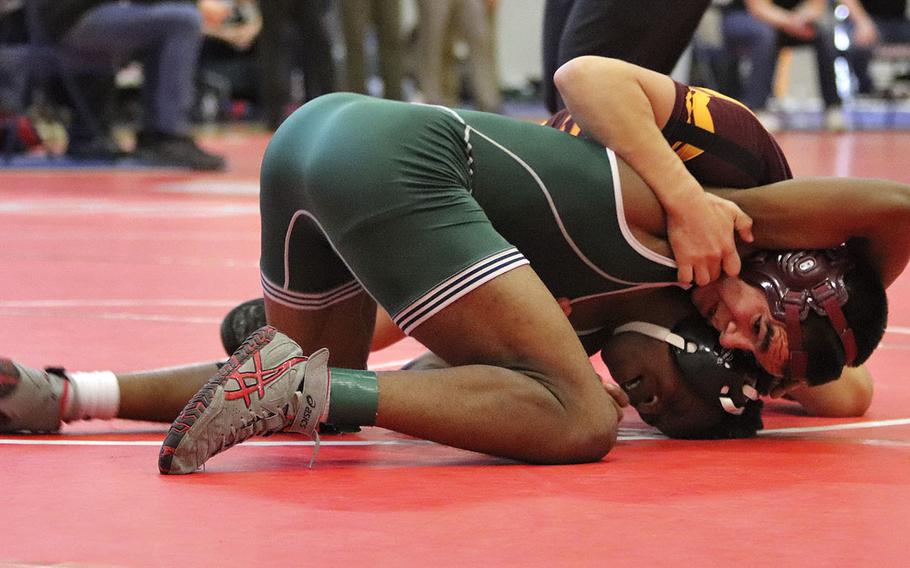 Buy Photo
Vilseck's Caleb Debeltz tries to escape from Naples' Choosen Lakombe's grip in the 138-pound, first-place matchup of Saturday's wrestling sectional held at Aviano, Italy. In the end, Debelts was able to pin Lakombe for the win. (Norman Llamas/Stars and Stripes) 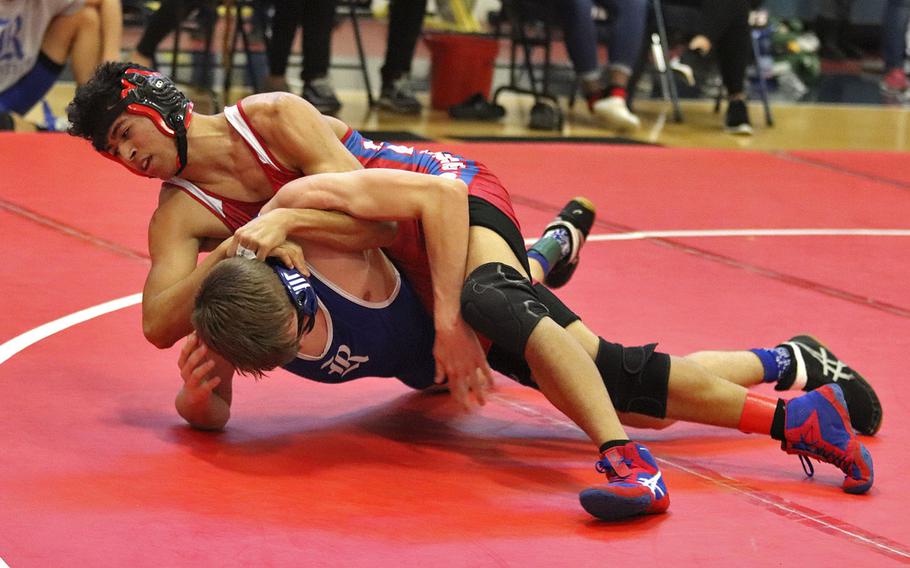 Buy Photo
Aviano's Xavier Wells attempts to pin Dennis Kukharev of the Rota Admirals in the first-place matchup of the 152-pound weight class of Saturday's wrestling sectionals held at Aviano, Italy. The match ended in controversy as the referee had awarded the match to Kukharev via pin, halfway through the third round. However, because Wells body was completely out of the wrestling circle when the match was called, Aviano's coaching staff argued that the match should have been paused and brought back inbounds. After several minutes of rules verification, the match was allowed to continue and Wells ended up earning the win by the score of 9-7. (Norman Llamas/Stars and Stripes) 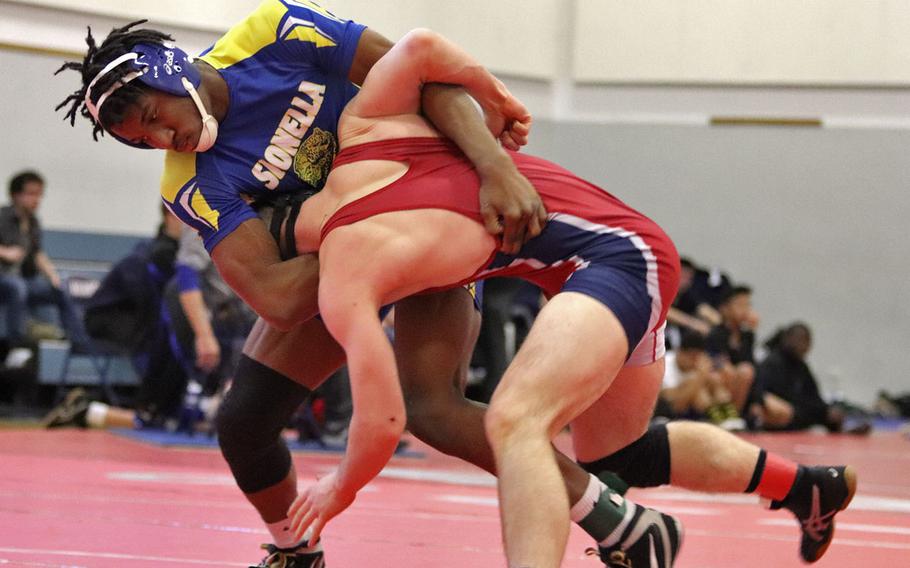 Buy Photo
Sigonella's Amari Pyatt attempts to take down Aviano's Nick Smith in the first-place match at the 170-pound weight class of Saturday's Wrestling Sectionals held at Aviano, Italy. Pyatt pinned Smith for the win and that brings Pyatt's record to 19-0 going into the Euros. (Norman Llamas/Stars and Stripes)

AVIANO AIR BASE, Italy – Right from the start, fans cheered loudly Saturday for their respective wrestlers in the Southern section wrestling meet.

More than half of the first 20 matches were won by pin.

But despite the quick wins that got the day started, most of the matches were pretty competitive. Matches between Division II rivals Rota, Naples and Aviano were cheered the loudest.

Wrestlers from seven DODEA-Europe schools competed in 14 weight classes. The top qualifiers in each weight class advanced to the European championships in Wiesbaden, Germany on Feb. 14-15.

“We’re winning a lot more matches than we expected,” Xavier Diaz, the Saints’ wrestling coach, said during the meet’s lunch break. “We’re finally clicking, and it feels good to see it all working how it’s supposed to.”

Diaz, a staff sergeant who is an F-16 maintenance instructor with the 372nd Training Squadron, has been with the Saints for the past four years and played a part in Aviano winning the Division II championship in 2017 and 2018 and a third-place finish in 2019.

Saints senior Nick Smith qualified, though he fell to Sigonella’s Amari Pyatt in the championship match.

Pyatt, who went undefeated last year on the way to a European title, is originally from Belleview, Neb.

“I’m doing good and I’m excited,” he said before the first-place match, which he won by pin.

Wrestlers and their coaches experienced a mixture of highs and lows throughout the day.

“Today has been a mixed bag for us,” Rota coach Luke Spencer said. “We had a couple of injuries and some of the wrestlers didn’t wrestle as good as expected.”

However, things did turn around for the Admirals after the lunch break. “After the break we had a couple of quick pins,” Spencer said. “I told my wrestlers to not focus on the results but rather to focus on the process.”

Rota won the division a year ago and the team’s motto is “Process over Product.”

Some of the story lines from last year’s season came back around this year as well. That included tiny Ankara’s one-person program: 160-pounder Roberts Swart.

Swart, a senior, finished second at last year’s European tournament. He’s back and appears stronger. He demonstrated it by winning two of his matches by pin in a combined 24 seconds. He won his second of three matches by technical fall, with a score of 19-3.

“It was good competition,” Swart said. “I had fun. The hardest match for me today was my second one against a wrestler from Rota, but I was able to get the technical win.”

When asked about next weekend’s championship, Swart said that he’s feeling great about it.

“It’s going to be stiff competition, but I believe I have a legitimate shot at first place,” he said. “I think that competition in my weight class has gotten slightly easier and my fitness has gotten better too.”

And he’s planning for life after wrestling as well.

“I would like to be an officer in the British Royal Marines,” Swart said. “I think I can make it if I stay around 10 years in the service. After I’m done doing that, I want to go to college and study psychology or engineering.”

Aviano senior Michael Hauser, who won at 145 pounds, plans to enlist in the Air Force.

But for the next week, the focus is solely on wrestling.

“This was my last home meet,” he said. “I’m very proud of all the wrestlers; I know how hard every one of them worked and today, it showed.”

Like others who qualified Saturday, Hauser – the quarterback on the Saints’ second straight D-II football championship in the fall - extended his season for another week.

“Everyone wants to place first at the Euros, but only the ones who put in the most work will get it done,” Hauser said. “I know how much work I have put in this season, so I’m hopeful.”

Ramstein runs northern sectional: Saturday at Brussels, the Royals qualified the bulk of the team that will make another run at Stuttgart for the Division I crown.

Ramstein figures to add even more qualifiers next week when wild-card entries are added to the field.

Stuttgart in good shape for tournament: Saturday at Stuttgart, reigning Division I dynasty Stuttgart fared well in the central sectional qualifier it hosted.

Close to 20 Panther wrestlers earned automatic berths in next weekend’s European tournament, a number that will expand when wild-card berths are announced this week.

While Stuttgart will have the necessary depth to boost its chances of extending its DODEA-Europe title reign, the Panthers were limited in terms of bracket victories Saturday. Stuttgart, which has no incumbent European champions, put five wrestlers in first place, including Carter Hanes at 138 and Jack Engelke at 145.