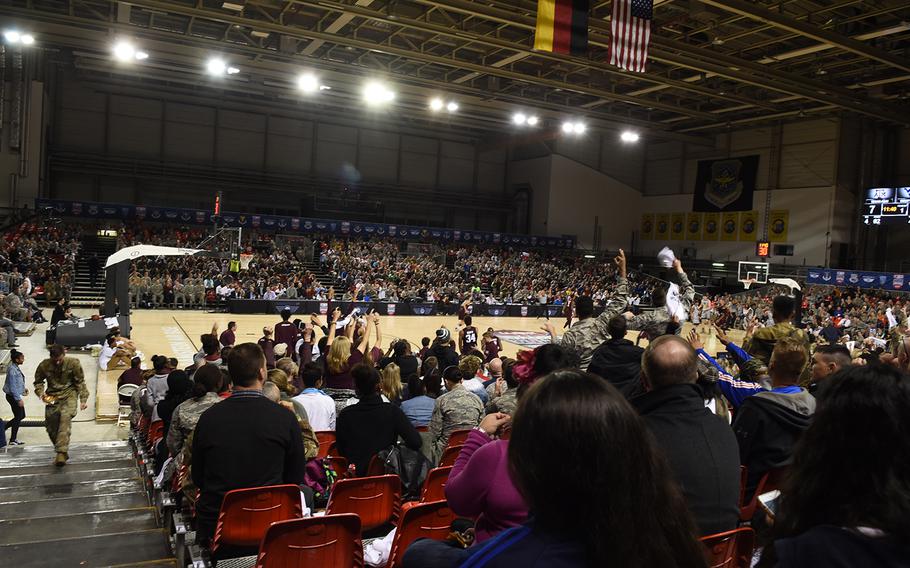 More than 3,000 people filled the seats inside an aircraft hangar at Ramstein Air Base, Germany, on Friday, Nov. 10, 2017, for the Armed Forces Classic featuring Texas A&M and West Virginia. (Jennifer H. Svan/Stars and Stripes)

More than 3,000 people filled the seats inside an aircraft hangar at Ramstein Air Base, Germany, on Friday, Nov. 10, 2017, for the Armed Forces Classic featuring Texas A&M and West Virginia. (Jennifer H. Svan/Stars and Stripes) Olivia Cotton, 5 months old, was one of the youngest people to attend the Armed Forces Classic between West Virginia and Texas A&M on Friday, Nov. 10, 2017, at Ramstein Air Base, Germany. Olivia sat with her dad, Petty Officer 1st Class Brian Cotton. The family came all the way from Air Station Naples, Italy, to see the game. ( Jennifer H. Svan/Stars and Stripes) 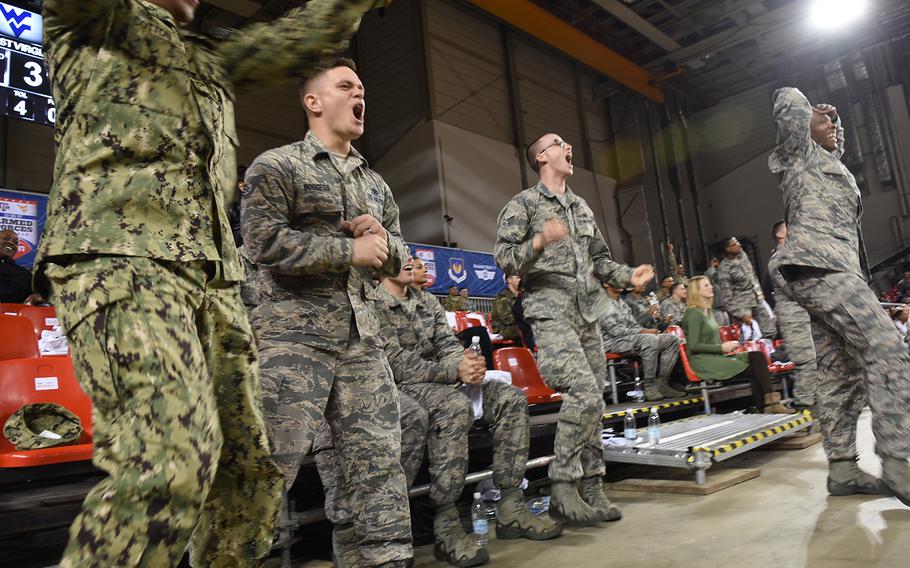 Servicemembers jump, protest and cheer during the Armed Forces Classic on Friday, Nov. 10, 2017, at Ramstein Air Base, Germany. (Jennifer H Svan/Stars and Stripes) Members of the Kaiserslautern Military Community greet the Texas A&M Aggies as they take to the court Friday, Nov. 10, 2017, at Ramstein Air Base, Germany for the Armed Forces Classic against the West Virginia Mountaineers. (Jennifer H Svan/Stars and Stripes) 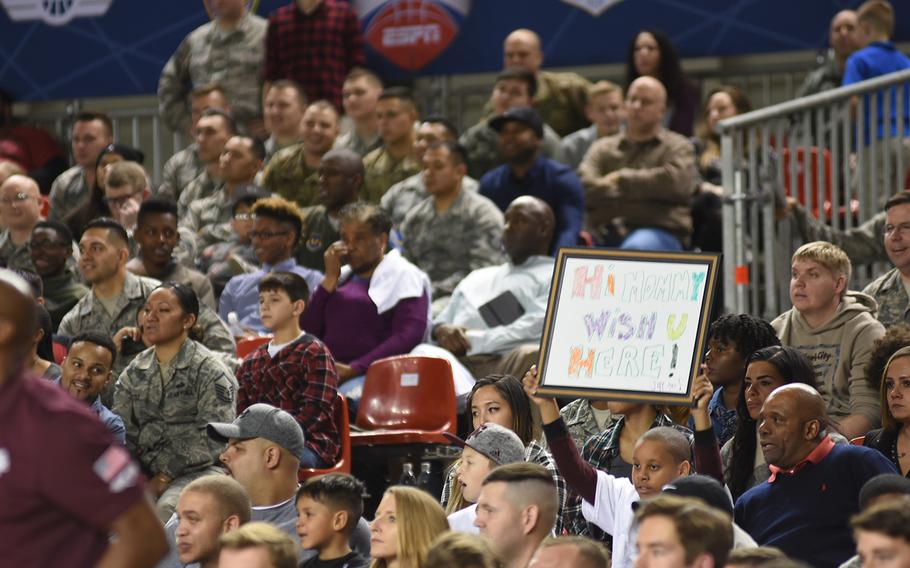 A young fan holds up a message on Friday, Nov, 10, 2017, to the televised audience tuning into the Armed Forces Classic at Ramtein Ari Base, Germany. Texas A&M beat West Virginia in the game. (Jennifer H. Svan/Stars and Stripes) Tareavion Mageo, 10, catches some shuteye while leaning against his dad, Sgt. 1st Class Jerome Mageo. His mother, Karen Mageo, sits on his left. The family was cheering for West Virginia and got standby tickets to the game. (Jennifer H. Svan/Stars and Stripes) 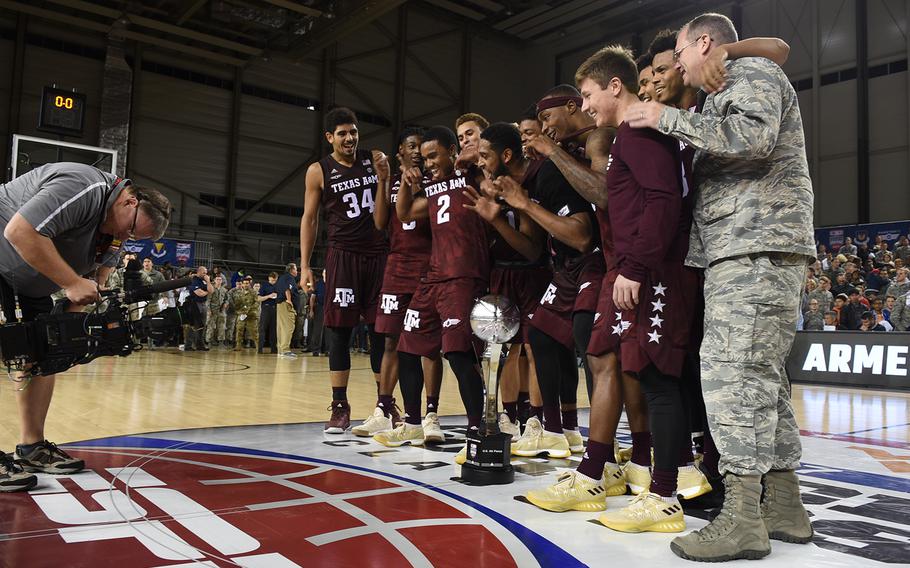 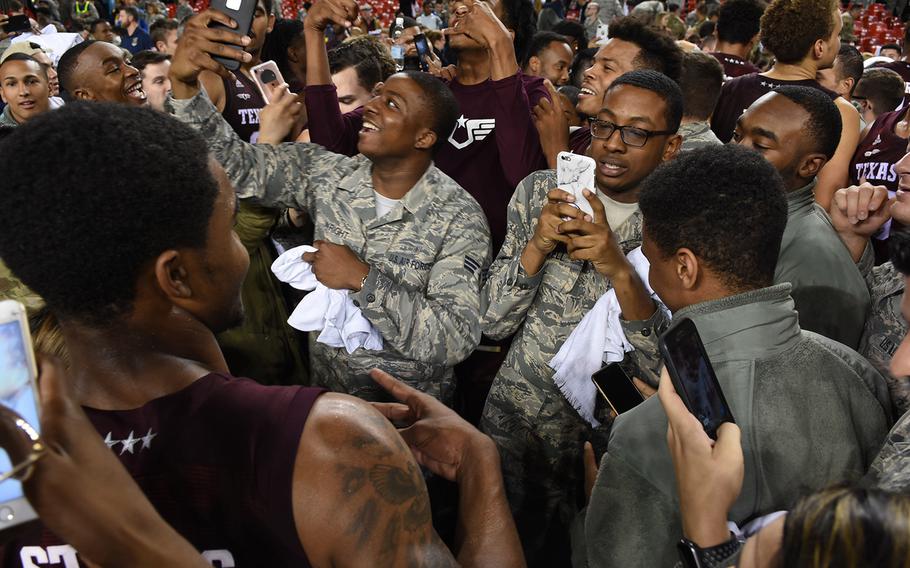 Airmen and others swarm around Texas A&M players, taking selfies and videos after the Aggies win over West Virginia in the Armed Forces Classic on Friday, Nov. 10, 2017, at Ramstein Air Base, Germany. (Jennifer H. Svan/Stars and Stripes) 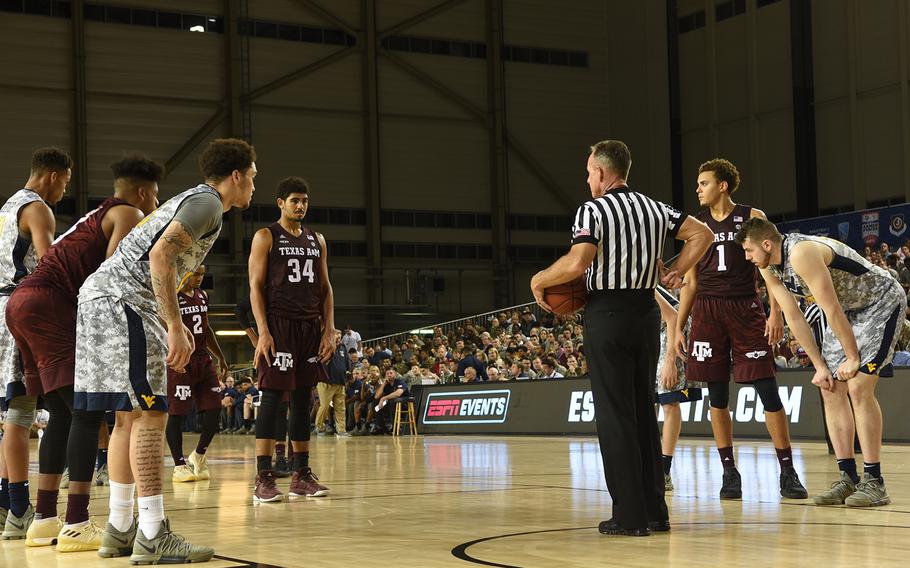 Players from Texas A&M and West Virginia wait for the ball during the Armed Forces Classic on Friday, Nov. 10, 2017, at Ramstein Air Base, Germany. ( Jennifer H. Svan/Stars and Stripes)

RAMSTEIN AIR BASE, Germany — The 2017 Armed Forces Classic was about much more than just basketball. But the basketball was pretty special in its own right.

Servicemembers, civilians and dependents streamed into a flight line hangar at Ramstein Air Base late Friday night for this year’s edition of the Classic, an annual game organized and broadcast by ESPN that brings live NCAA basketball to military audiences around the world.

They were rewarded with a battle of teams ranked in the AP’s preseason top 25 that quickly became a mismatch as the 25th-ranked Texas A&M Aggies recovered from an early deficit to blast the 11th-ranked West Virginia Mountaineers 88-65.

The favored Mountaineers led by as many as 13 points in the first half. But the Aggies went into a timeout with just under seven minutes to play before halftime and came out a different team. Three-pointers by D.J. Hogg and Admon Gilder and a rugged three-point play by Tyler Davis triggered a stunning comeback that had the Aggies up seven at halftime and bound for a runaway victory.

“We came out ready to play, man, we had our heads on right and we just chipped away at the lead,” Davis said.

Davis, a 6-foot-10 junior center, finished with a double-double of 23 points and 13 rebounds, while Gilder had 23 points, nine rebounds and seven assists. Hogg came off the bench to hit four three-pointers as part of an impressive all-around performance that included 19 points, seven rebounds, six assists and two steals.

James Bolden scored 19 points off the bench to pace the Mountaineers.

Hogg, a 6-foot-9 junior forward, said the Aggies just needed time to adjust to the atmosphere and magnitude of the moment, explaining that they found success when they resisted West Virginia’s relentless ball pressure and “slowed the game” to a more manageable pace.

“Get the nerves out, get everything out,” Hogg said. “Once we got it going and played it our way, it was good.”

The Veterans Day game was a win for Ramstein regardless of the outcome. Speaking just before tipoff, Brig. Gen. Richard G. Moore Jr., the commander of the 86th Airlift Wing, said the game was “super exciting” for the base.

“For us it’s a reminder of some of the things that are important to us about home,” Moore said. “To have the opportunity to host a game like this here at our home away from home is one of the most exciting things we’ve done in a long time.”

The game tipped off 14 minutes after midnight Saturday morning, allowing the ESPN broadcast to start at 6 p.m. for viewers on the East Coast of the United States. But the Ramstein crowd, listed officially at 3,128, was fully awake despite the late local hour.

Attendees, many decked out in West Virginia or Texas A&M gear and paraphernalia, mugged for the ESPN cameras, danced through intermissions, roared for dunks, blocked shots and three-pointers and jeered airballs, stray elbows and referee calls. A group of servicemembers mobbed the Texas A&M team as it celebrated its victory at center court, and the Aggies lingered long after the final whistle for autographs and pictures with patient fans.

Though a very consequential regular-season game was the centerpiece of the visit, those kind of interactions made the trip more than the average road game for the Mountaineers and Aggies.

Players from both schools made the most of their brief stay at Ramstein, starting with their Wednesday arrival via Frankfurt Airport and set to conclude with a return flight home soon after the game early Saturday morning. They spent an evening at the bowling alley, ran a youth basketball camp at Ramstein’s Southside Fitness Center and took a ride in a C-130 airplane.

“It’s been cool to hear the stories of the people serving here and just getting to know them better,” Texas A&M guard Chris Collins said Thursday. “The stuff you just don’t really think about that is constantly going on around the world. It gives you a greater appreciation for the people over here.”

The players spent nearly all of their visit on base, and some said they were surprised to see the American-style community centered around their temporary home in the Kaiserslautern Military Community Center, a shopping mall-style complex of retail stores, restaurants and hotel rooms.

“It’s very American,” West Virginia guard Jevon Carter said on a break from Thursday’s youth camp. “I thought it was going to be more foreign. It’s been no change for us.”

Davis, the breakout star of Saturday’s game, had no idea what he’d find upon arrival. While he said he would have liked the opportunity to explore some of Germany beyond the base’s fences, Davis thoroughly enjoyed the comfortable visit to Ramstein.

“I didn’t expect this at all, actually. It’s much nicer than what I pictured in my head,” Davis said Thursday. “It feels like we’re still at home.”

Both the Mountaineers and Aggies are major-conference powers with championship aspirations this season, and a grueling overseas road trip has the potential to wear down players just as those campaigns begin.

When ESPN initially approached the program to participate, West Virginia head coach Bob Huggins said he wasn’t sure he wanted to add an overseas trip to his team’s already rigorous travel schedule. But the chance to visit an overseas military base and spend time around servicemembers easily outweighed those concerns.

“I thought this was an opportunity we couldn’t pass up,” Huggins said Thursday. “We appreciate what the people here do so much. It’s the least we could do.”

The Armed Forces Classic held Its inaugural edition at Ramstein in 2012, with Connecticut defeating Michigan State 66-62, and has since staged games in Korea, Puerto Rico, Japan and Hawaii, all on or near a U.S. military facility. Next year’s Classic is slated for Fort Bliss, Texas, on Nov. 9, 2018.