Surprise! It's Wiesbaden vs. Ramstein - again Ramstein's Gabriel Moreno carries the ball Friday night, Oct. 10, 2014 at Wiesbaden, Germany. Wiesbaden went on to win 20-14 in overtime. Ramstein will play Wiesbaden in the DODDS-Europe Division I championship this Saturday, Nov. 1, 2014 at Kaiserslautern, Germany (Joshua L. DeMotts/Stars and Stripes)

Ramstein's Gabriel Moreno carries the ball Friday night, Oct. 10, 2014 at Wiesbaden, Germany. Wiesbaden went on to win 20-14 in overtime. Ramstein will play Wiesbaden in the DODDS-Europe Division I championship this Saturday, Nov. 1, 2014 at Kaiserslautern, Germany (Joshua L. DeMotts/Stars and Stripes) 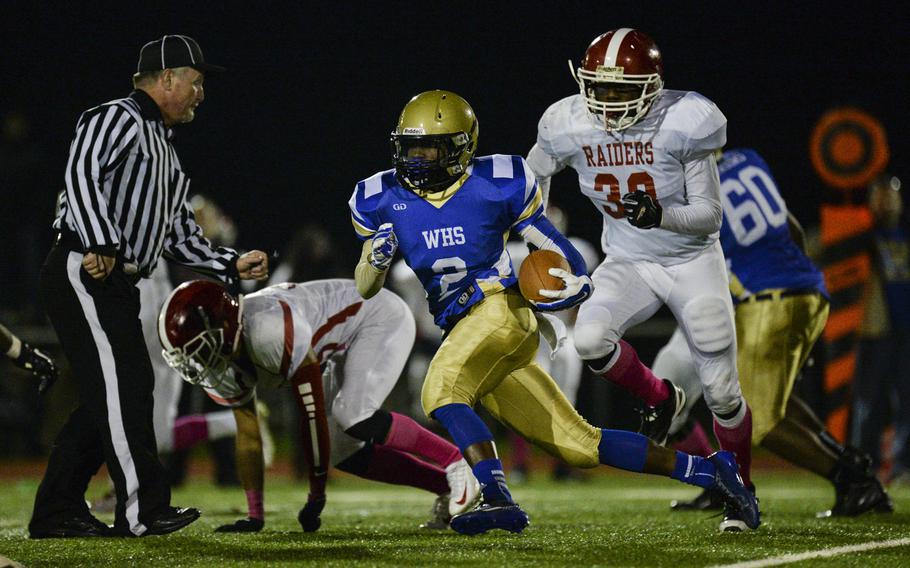 Every sports league has its classic feud. In DODDS-Europe football, it’s Ramstein versus Wiesbaden.

Other teams have swooped in and out of the title picture, but along with since-closed Heidelberg, the Royals and Warriors have been the standard-bearers for Division I football over the last decade. And so they are again in 2014; they’ll meet at 6 p.m. Saturday at Kaiserslautern High School to decide the DODDS-Europe Division I football championship.

Those looking for fresh faces and upstarts won’t find it here; these are the big boys of DODDS-Europe, sharing the field yet again to script another page in a rivalry that is likely far from over.

At least one of the two teams has been in every Division I European championship game since 2003, and they’ve combined to win eight of those 11 titles. Their championship matchup Saturday will be the fourth time they’ve faced each other for the title in that span and the third time in the last four years. Ramstein beat the Warriors in 2003; Wiesbaden beat the Royals in 2011 and 2013.

That background suggests that Saturday’s game might be a classic in waiting.

The Warriors are built around speed and athleticism.

Quarterback Tim Cuthbert capably helms an offense that is a threat to score on any snap via any number of offensive plays. Ramstein coach Carlos Amponin acknowledges Wiesbaden’s athletic advantages.

“They are a physically larger team than we are, they are easily more athletic and they are faster than any team I have seen in my tenure here in Europe,” Amponin said.

The Royals, meanwhile, take a more direct approach. Ramstein moves the ball behind perhaps DODDS-Europe’s most rugged offensive line. Wiesbaden coach Steve Jewell is well aware of the challenge ahead.

“We will have to play tougher defense,” Jewell said. “The Royals have a tremendous front line on offense with multiple running backs that don’t quit.”

With two of DODDS-Europe’s most accomplished coaches guiding its two most talented rosters, Saturday’s strategies should be interesting to watch unfold.

Wiesbaden will seek to get its athletes out in open space where they can outrun Ramstein tacklers. The Royals will counter by grinding out long drives and keeping the Warrior offense sidelined. Should one side find success, the other will likely have a counter.

Ramstein and Wiesbaden are historical powers. They’ve been the two best teams in Division I this season, separated by a wide gulf from the rest of the field. Given all that, Saturday’s game isn’t fresh or surprising.

It must simply be appreciated for what it is. The two titans of Division I football, clashing once again.