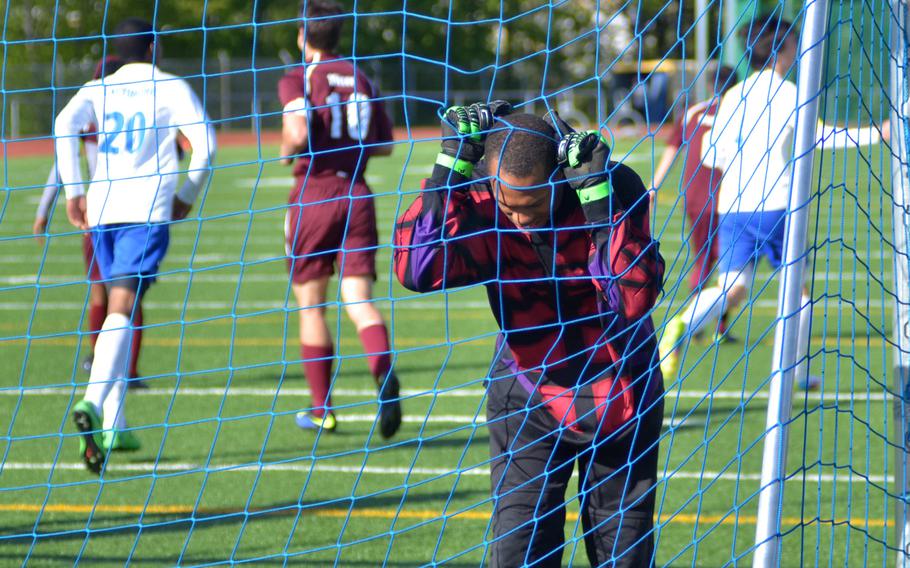 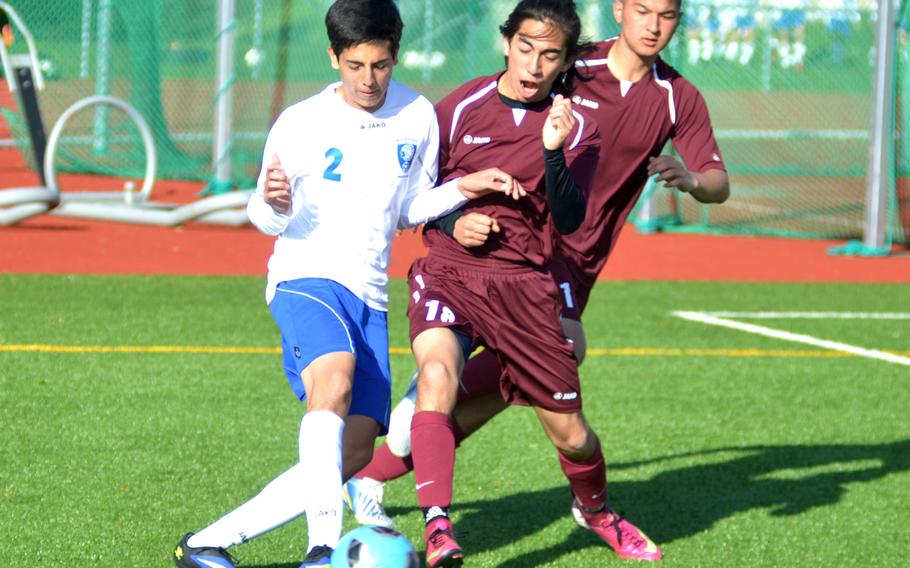 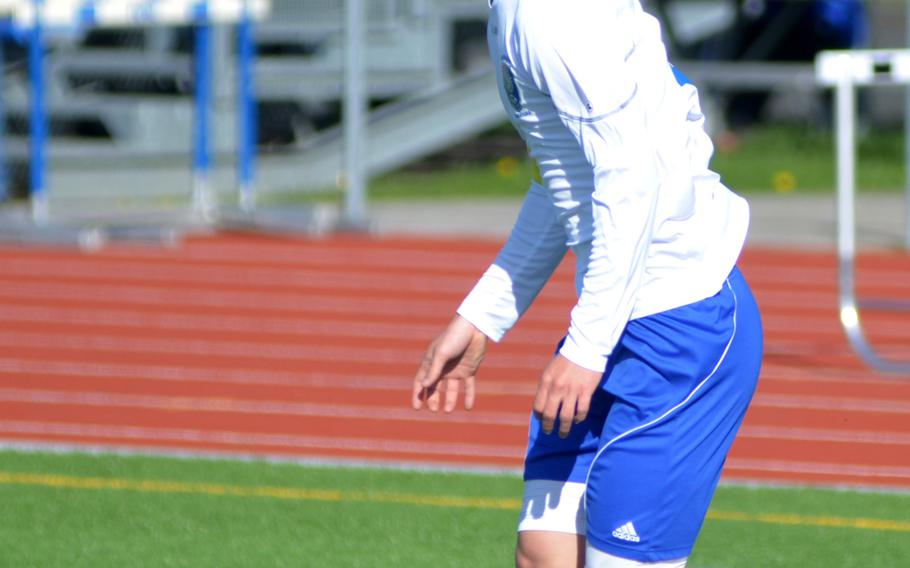 Wiesbaden's John Arnold looks for an open player in a game against Vilseck. The Warriors beat the Falcons 8-0, Friday. (Eric A. Brown/Stars and Stripes) 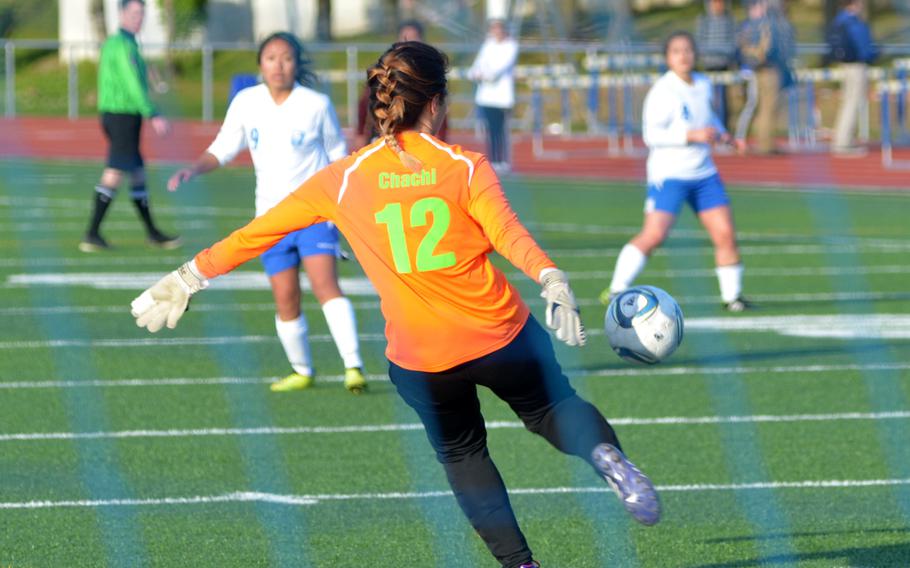 Vilseck's goalie Chachi Valverde kicks the ball back downfield in a game against Wiesbaden. The Warriors tied the Falcons 3-3, Friday. (Eric A. Brown/Stars and Stripes) 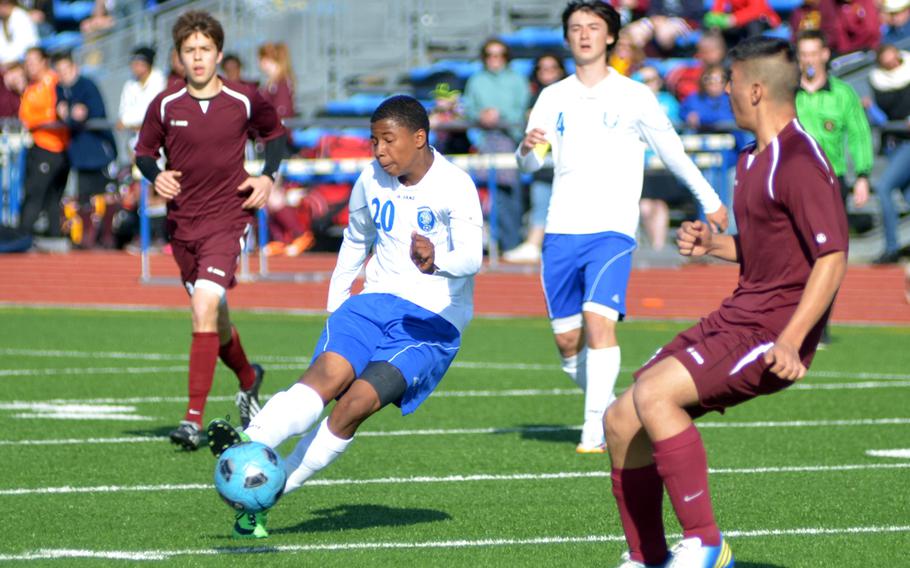 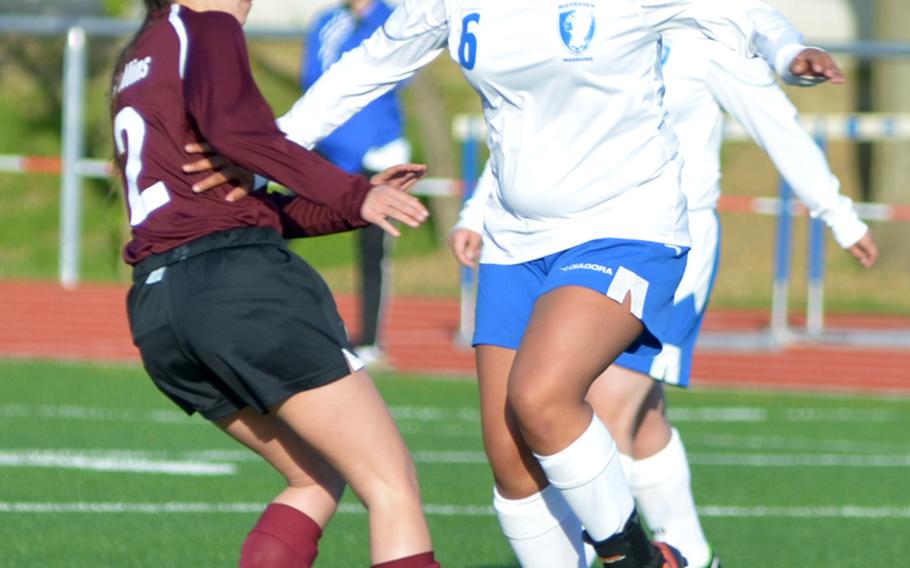 Vilseck's Hannah Collins, left, and Wiesbaden's Maria Hernandez battle for control of the ball in a game that Wiesbaden tied 3-3, Friday. (Eric A. Brown/Stars and Stripes)

WIESBADEN, Germany — The Vilseck Falcons came into their first DODDS-Europe Division I match-up of the season with hopes to build upon the boys' flawless 2-0 record, and to break a streak of three losses to open the season for the girls.

However, the Wiesbaden Warriors had plans of their own.

Although the Vilseck girls were able to battle it out and get 3-3 draw on the board, the matchup between the boys went much worse from a Falcons perspective, with Wiesbaden handing them an 8-0 shutout.

BoysWiesbaden 8, Vilseck 0: The Warriors speed and agility were too much for the Falcons, and the defense was far too ineffective to keep the ball out of their own net.

"We didn't have anyone pressuring anyone on the ball," said Falcons boys head coach John Sabala. "They were pretty much able to move the ball at will around the field."

Warriors midfielder John Arnold's technical footwork and ability to manage the ball from the center of the field earned him a committed Falcons' defender all game.

And that worked. Sort of.

"They had to actually go through other guys to try and run the offense," Sabala said.

Unfortunately, the Warriors - working very hard on their passing and retaining possession - did just that.

"I thought that we demoralized them with our early scoring," Wiesbaden coach Ben Arcila said. Although the Warriors had the lead for the entire match, the level of aggressiveness never subsided ever a bit, perhaps a little too much for the refs as witness to the several yellow cards the team accumulated.

"The hardest thing for to do as a coach is to keep the kids humble," Arcila said. "You can't be winning 5-0 and accumulate this number of yellow cards."

GirlsWiesbaden 3, Vilseck 3: A large senior turnover over the off season — to the tune of nearly three-quarters of the entire girls varsity team — hasn't dampened the Falcons' enthusiasm to win each match.

"The girls are approaching each game with fundamentals in mind," Vilseck head coach Tracy Thornbrugh wrote in a pre-game e-mail even as the team was sitting on a 0-3 record.

Vilseck wanted a win. But the team seemed happy with a draw as well. The entire team poured from the bench after the game ended.

At halftime, the score was 2-1 Wiesbaden. The Warriors appeared headed for a slim victory, but late in the second half Falcons' senior forward Alison Rittenhouse finally evened things up by taking the ball halfway down field to the net.

"They finally played to the expectations I had all season," Thornbrugh said. "They did the through balls. They won it when they were supposed to win it… those were the things I've been asking them to do, and they finally did them."

"The tie is a win for us," cheered Thornbrugh. "It's going to pump the girls up."

Saturday, Wiesbaden is at Patch and Vilseck travels to Kaiserslautern.