Lakenheath's Adrianna Ruffin spikes the ball Saturday, Oct. 4, 2014 as Kaiserslautern's Tia Hall tries to block during a volleyball match at Ramstein, Germany. Ramstein and Kaiserslautern will play host to 25 other teams for the 2014 DODDS-Europe volleyball championships from Oct. 30, through Nov. 1, 2014. (Joshua L. DeMotts/Stars and Stripes)

Lakenheath's Adrianna Ruffin spikes the ball Saturday, Oct. 4, 2014 as Kaiserslautern's Tia Hall tries to block during a volleyball match at Ramstein, Germany. Ramstein and Kaiserslautern will play host to 25 other teams for the 2014 DODDS-Europe volleyball championships from Oct. 30, through Nov. 1, 2014. (Joshua L. DeMotts/Stars and Stripes) 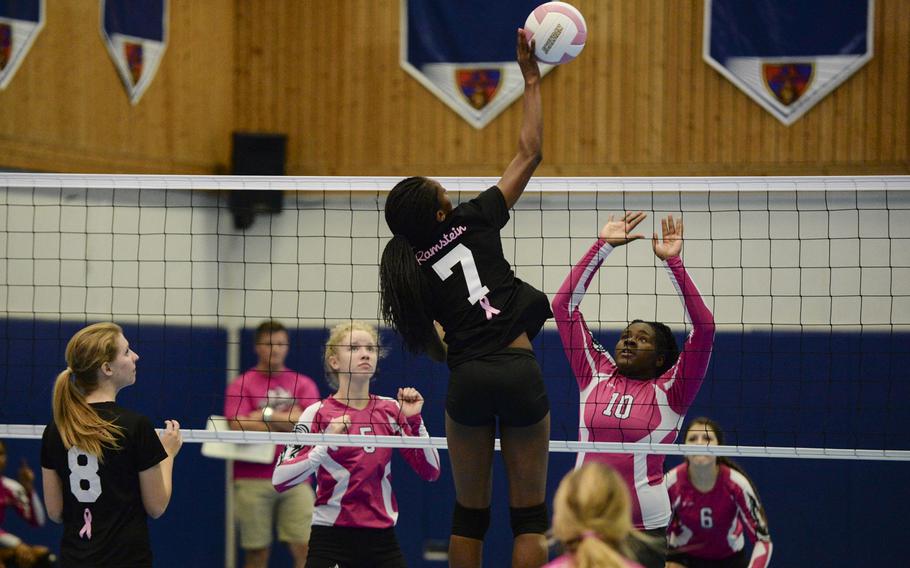 Ramstein's Danee Lawrence spikes the ball Saturday, Oct. 4, 2014 during a volleyball match against Vilseck at Ramstein, Germany. Ramstein and Kaiserslautern will play host to 25 other teams for the 2014 DODDS-Europe volleyball championships from Oct. 30, through Nov. 1, 2014. (Joshua L. DeMotts/Stars and Stripes)

This year’s edition of the DODDS-Europe volleyball championships matches its predecessors in fundamental details: dozens of matches spread across three days around Halloween and multiple courts in the Kaiserslautern Military Community. But this year’s tournaments also have a very different look.

Earlier this fall, DODDS-Europe shuffled its divisional deck in every sport except for football. The move cleared up the logjam in Division II, funneled fresh competition up to the stagnant Division I scene and boosted the anemic Division III ranks. The tournaments, which start Thursday and run through Saturday’s championship matches, will be the official debut of the new arrangement.

Division IThe large-school volleyball roster has ballooned to a robust nine schools this year with the ascension of Naples, Vicenza and SHAPE. But it’s one of the incumbent six that enters the bracket as the team to beat.

Cropped out of the championship picture a year ago, the Wiesbaden Warriors have responded with a breakout 2014 campaign featuring the division’s only undefeated record and the tournament’s undisputed top seed. Coach Linnea Velsvaag has arranged a talented roster into a diverse, dominant team that has proven unbeatable to date. With opponents old and new looking to take the Warriors down, Velsvaag said her team is simply focusing on sustaining its elite level of play.

“All we can really control is our side of the court,” Velsvaag said. “We need to be prepared for anything and everything.” That’s a good a phrase as any to describe a tournament that scarcely resembles last year’s six-team scrum.

Of that group, two-time defending champion Ramstein has been reduced to a humble seventh seed after an unremarkable 7-6 regular season. The team the Royals beat in last year’s final, Lakenheath, shuffled into the eighth seed after losing significant senior talent from the 2013 squad. Fourth seed Vilseck enjoyed a successful 9-5 regular season but was beaten handily by Wiesbaden and Patch. Ninth-seeded Kaiserslautern, meanwhile, has gone winless.

Patch, then, is likely Wiesbaden’s biggest threat from among its familiar foes. Though the Panthers went 0-2 against the Warriors this fall, each match was extremely competitive. The first, on Oct. 4, was decided by a 15-12 fifth-set tiebreaker. The Panthers then took the first set from Wiesbaden on Oct. 25 before falling in four sets.

It’s hard to predict where the division’s three newest members will rank in that hierarchy. Sixth-seeded SHAPE got a taste of Division I competition in the regular season while splitting two matches with Lakenheath. But the majority of their 8-2 record came at the expense of small-school neighbors such as Menwith Hill, Brussels and Alconbury.

Naples is the reigning – if not defending – DODDS-Europe Division II champion. The Wildcats’ 15-1 regular season made them the toast of Italy and the tournament’s No. 3 seed, but they haven’t seen any Division I competition save for fellow newbie Vicenza, which will enter as the fifth seed.

The senior-rich Wildcats will wander into the unknown this week hoping to “prove that we can compete at any level and be successful,” coach Julia Byler said.

“It is a bit of a disadvantage to not be able to know your competition prior to the tournament,” she said. “But that helps us, too, so that the other teams do not know us either.”

Division IIDivisional realignment brought DODDS-Europe’s ever-expanding middle class down to a reasonable 10-team level and even siphoned some of its longtime power programs. But the division remains as unpredictable as ever. The bracket’s top three seeds – No. 1 Hohenfels, No. 2 Aviano, and No. 3 Rota – hail from three different countries, didn’t play each other during the regular season and didn’t lose a single Division II match between them. That unfamiliarity and parity makes this division as competitive as ever, Tigers coach Kathlene Clemmons said.

“You cannot count anyone out and think it will be easy,” Clemmons said.

The top-seeded Tigers racked up a 10-2 record this fall, a mark that includes two wins in three matches against strong Division I program Vilseck. Further, Hohenfels proved its mettle on the final day of the season in winning five-set marathon matches against Vilseck and Ansbach.

That’s exactly the kind of preparation needed for a successful run through the grueling three-day tournament.

“We feel pretty good in the endurance category,” Clemmons said.

The second-seeded Saints and third-seeded Admirals boast impressive resumes of their own. Aviano lost only to Division I opponents Naples and Vicenza, but the Saints also recorded wins over each. Rota’s body of work is limited by a location remote from DODDS-Europe peers, but they showed plenty in wins over fourth-seeded AFNORTH, fifth-seeded Bitburg and Division I SHAPE.

Sixth-seeded American Overseas School of Rome is a perennial contender. Seventh-seeded Ansbach and ninth-seeded Black Forest Academy have seen tournament success in the past and have the tools for a potential upset. Eighth-seeded Bahrain is an annual mystery without any DODDS-Europe frame of reference. Even winless tenth seed Marymount has had its moments, taking sets from the likes of Naples, Vicenza and Aviano.

Division IIIThroughout the regular season, DODDS-Europe’s smallest schools take on their larger regional neighbors with upsets on their minds. That might be why none of them slide readily into the role of favorite when the Division III tournament rolls around.

The nominal favorite, top-seeded Alconbury, brings a 6-7 record into the tournament. But like most Division III schools, that record is skewed by repeated matchups with much larger schools; in the Dragons’ case, that includes Division I Lakenheath and SHAPE. Alconbury’s task is made even harder by inexperience – only two of the Dragons’ 10 players have tournament experience.

No. 2 Florence was dealt a similar scheduling hand in its 6-6 campaign featuring matches against Division I Naples and Vicenza and Division II Aviano. But the team certainly has postseason-level moxie, as evidenced by a one-day, 14-set Oct. 11 marathon in which it won two matches over AOSR and two more over Marymount.

The rest of the bracket’s eight teams have similarly oddball résumés.

Menwith Hill claimed the bracket’s third seed despite a 2-10 record accrued over a schedule similar to Alconbury’s. Turkish teams Ankara and Incirlik occupy the fifth and sixth seeds, respectively, along with their usual status as wild-card contenders. No. 7 Baumholder beat Brussels twice but came away empty over its other seven matches.

Meanwhile, Division III stalwarts Brussels and Sigonella have descended down the rankings after playing for the title last season. Runner-up Brussels has slipped to fourth, while defending champion Sigonella has plummeted all the way to the eighth and final seed.

“The beauty of the sport,” Sigonella coach Shawn McCarthy said. “Is you just never know until you play the game.”

BoysWhile the girls tournaments weather major restructurings, the concurrent DODDS-Europe boys tournament is slowly growing. This year’s bracket edged into the double digits with 10 teams; all eight of last year’s teams, including six from Italy and two from Turkey, return, with Black Forest Academy and Bahrain joining the fray.

Newcomer BFA will be welcomed to the tournament with the 10th seed and an early-morning debut against undefeated top seed American Overseas School of Rome. AOSR won last year’s title in a hard-fought five-set match over Incirlik, which is seeded fifth in the tournament and slotted in the same pool as AOSR and BFA. Fourth-seeded Sigonella and eight-seeded Marymount round out that side of the tournament.

Second-seeded Naples headlines the other five-team pool alongside third seed and tournament host Aviano, No. 6 Bahrain, No. 7 Vicenza and No. 9 Ankara.