South of the Alps, but top of the heap 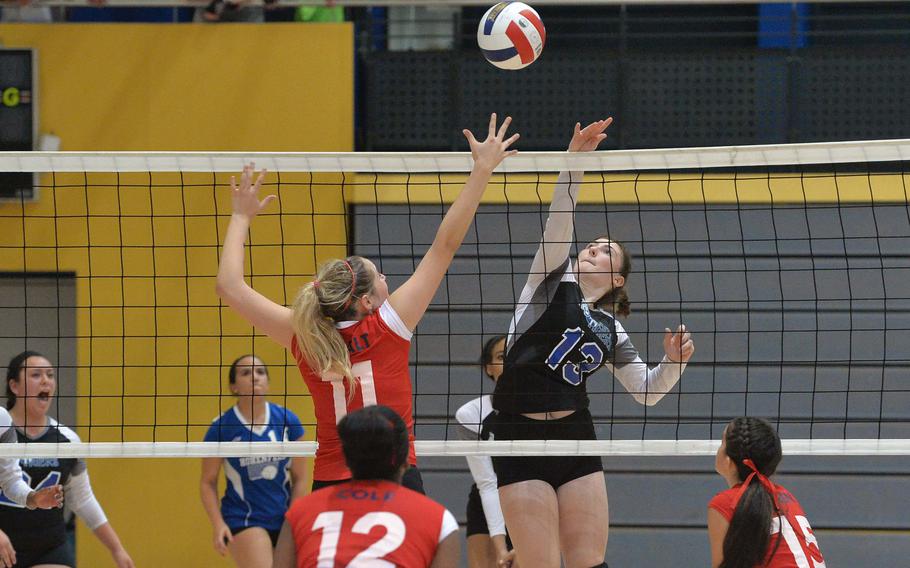 Aviano's Cassandra Awalt ,left, and Amelia Heath of Hohenfels battle at the net as their teammates watch in a Division II semifinal at the DODDS-Europe volleyball championships. Aviano won 25-22, 25-21, 21-25, 25-22 to advance to Saturday's final against Rota. (Michael Abrams/Stars and Stripes)

Aviano's Cassandra Awalt ,left, and Amelia Heath of Hohenfels battle at the net as their teammates watch in a Division II semifinal at the DODDS-Europe volleyball championships. Aviano won 25-22, 25-21, 21-25, 25-22 to advance to Saturday's final against Rota. (Michael Abrams/Stars and Stripes) 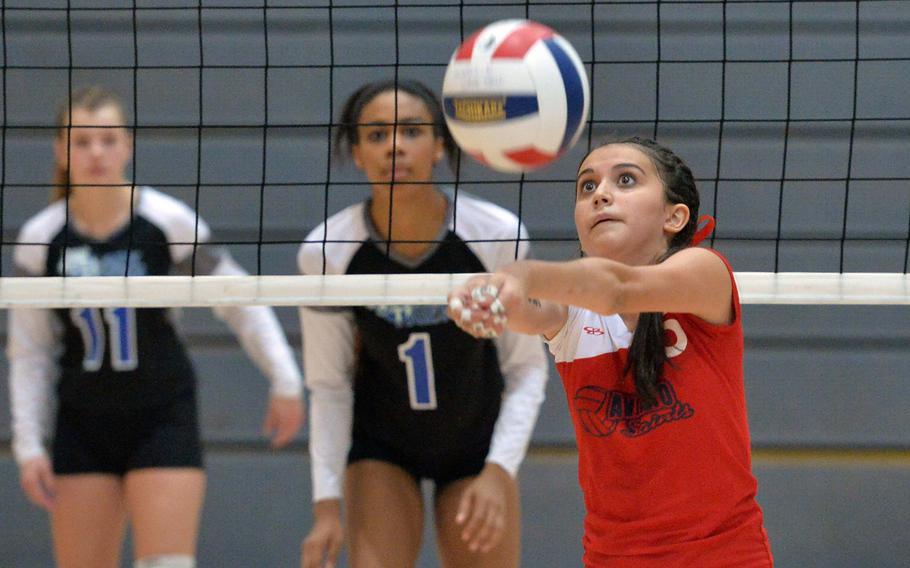 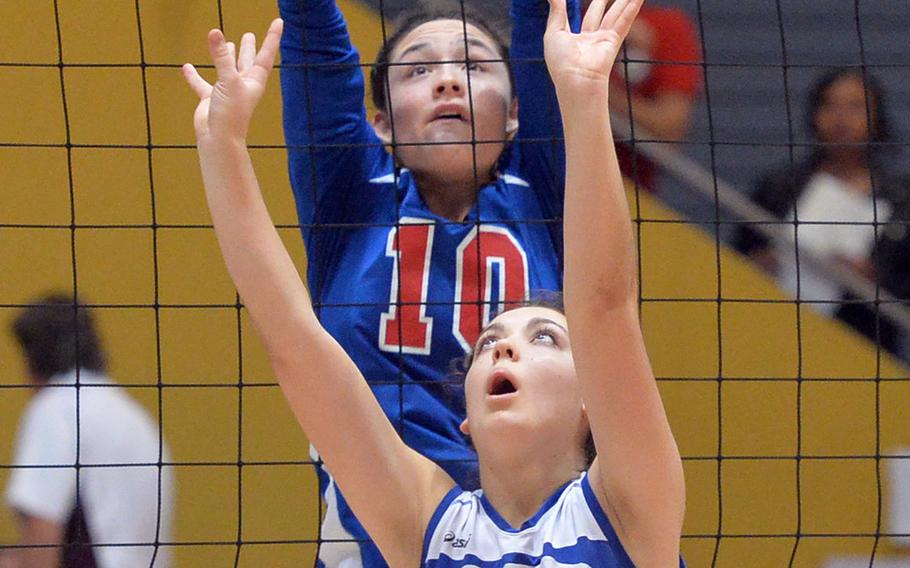 Ramstein's Ebony Madrid defends against Wiesbaden's Ashton Cloud in a Division I semifinal at the DODDS-Europe volleyball championships in Ramstein Friday, Oct. 31, 2014. Wiesbaden won 25-22, 25-13,17-25,25-15 to advance to Saturday's final against Naples. (Michael Abrams/Stars and Stripes) 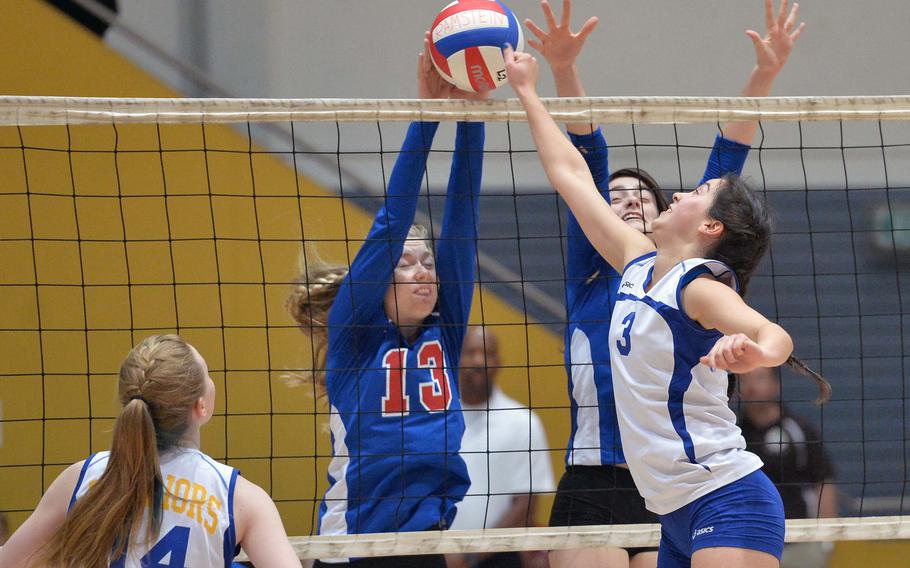 Ramstein's Sierra Nelson and Brittany Highley defend against Wiesbaden's Andriana Ibanez in a Division I semifinal at the DODDS-Europe volleyball championships in Ramstein Friday, Oct. 31, 2014. Wiesbaden won 25-22, 25-13,17-25,25-15 to advance to Saturday's final against Naples. Watching the action at left is Brigantia O'Sadnick (Michael Abrams/Stars and Stripes) 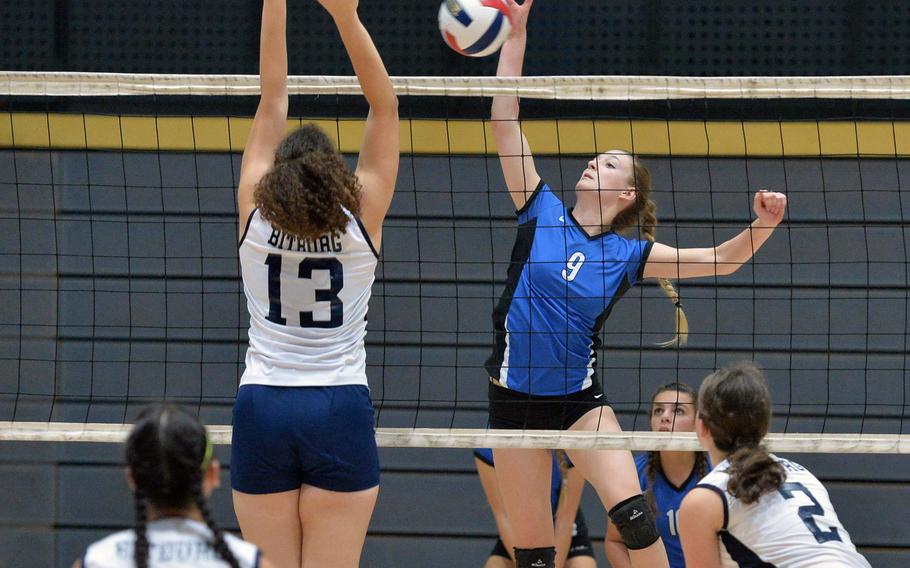 Rota's Janae Curtis hits the ball against Bitburg's Elise Rasmussen in a Division II semifinal at the DODDS-Europe volleyball championships in Ramstein Friday, Oct. 31, 2014. Rota won the match 25-13, 21-25, 25-19, 25-23 to advance to Saturday's finals against Aviano. (Michael Abrams/Stars and Stripes) 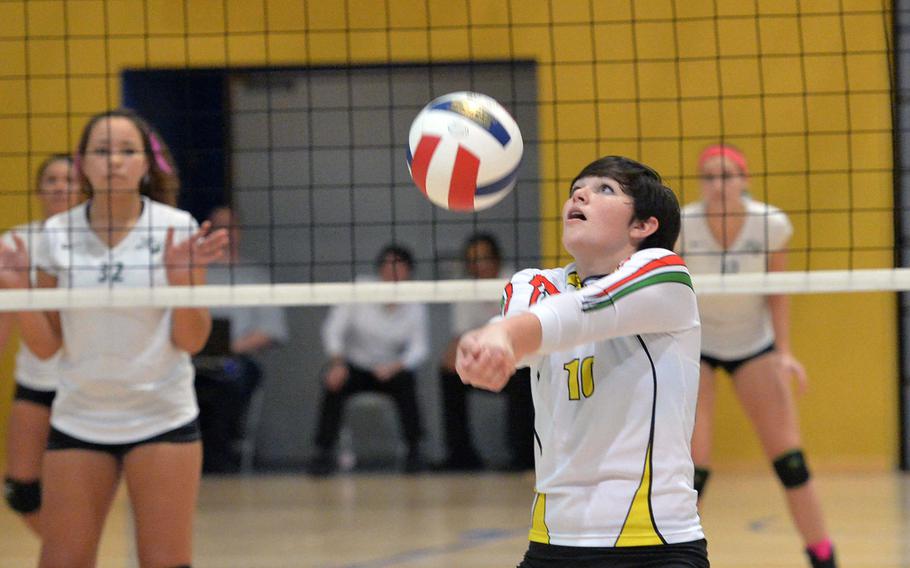 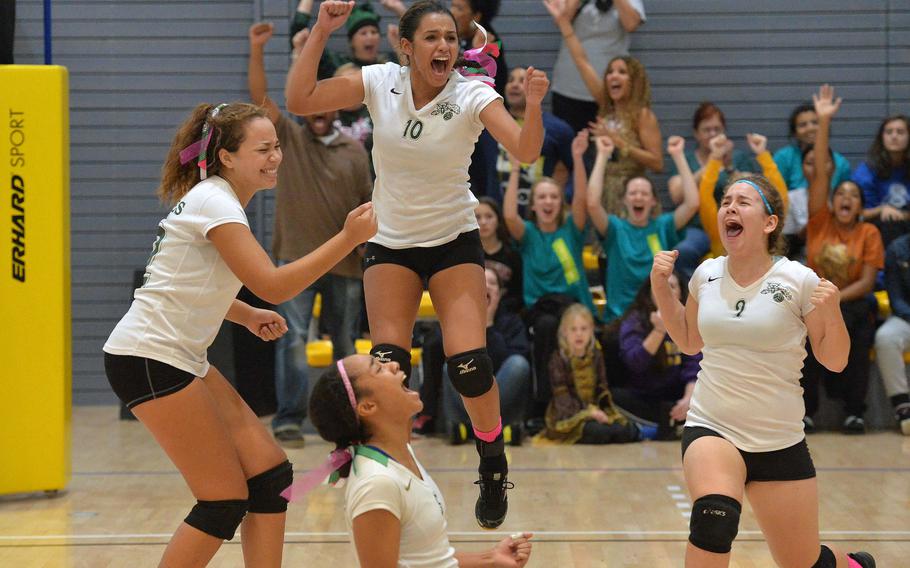 Naples Wildcats Skylar Evans, Leina'ala Esperon, Keylee Soto and Amanda James celebrate their win over Vicenza to advance to the Division I finals of the DODDS-Europe volleyball championships. Down by two sets, Naples won three straight for the 22-25, 20-25, 25-20, 25-11, 15-5 victory and the right to meet Wiesbaden in Saturday's championship. (Michael Abrams/Stars and Stripes)

RAMSTEIN AIR BASE, Germany – This season’s DODDS-Europe realignment has served to expand Italy’s volleyball power base.

Italy-based teams advanced through both Division I and Division II semifinals Friday, will compete in all three European championship matches Saturday and will come away with at least one title.

Saturday’s championship action at Ramstein’s Southside Fitness Center starts with the Division III match at 10 a.m., followed immediately by the Division II match and Division I match in succession.

Division I: In a scene that was either symbolic or simple happenstance, the adjacent courts hosting Friday night’s concurrent large-school semifinals featured two diverse sets of opponents.

On one side was the German old guard, represented by Division I power programs Wiesbaden and three-time defending champion Ramstein, taking to the volleyball court a night before they’ll once again play for the Division I football championship.

And on the other court was the Italian new guard, elevated to the higher level in a sweeping fall realignment: reigning Division II champion Naples and longtime rival Vicenza.

Wiesbaden dismantled Ramstein 25-22, 25-13, 17-25, 25-15, tapping into the same cohesiveness and determination that earned them an undefeated regular season and the tournament’s top seed.

“One of the rules I kind of went by this year was ‘everyone’s a setter,’” Warrior coach Linnea Velsvaag said. “So the ball never dropped, because everybody took control on the court.

“I think the teamwork is what’s held them together so far, and it’s going to get us through tomorrow.”

“We come into every match like we want to win,” Tafoya said. “We have the passion for it and the drive, the fortitude.”

While Wiesbaden was practicing its winning brand of volleyball on one side of the gym, similar traits were on display on the other.

Wildcat coach Julia Byler said the only adjustment her team made after falling behind was psychological.

“We couldn’t find our energy. It was like we were still on a break. We had to find it,” Byler said. “What is it that’s going to make you work hard?”

“I knew the skill was there,” Byler said. “We try to remain steady, mentally strong and emotionally strong.

“Deep within, they found it, and they ran with it.”

“We still had hope” despite the early deficit, Dye said. “We had a lot of heart, and we play as a sisterhood.”

Saturday’s finalists survived a robust nine-team bracket to reach the championship game, up from the six-team field of recent years.

The Warriors strutted through tournament pool play with the same undefeated swagger with which they traversed the regular season, winning all of their sets by at least seven points and eliminating the persistent Royals.

The Wildcats navigated the tournament’s other pool without a defeat, including Friday wins over Patch and Ramstein, and dispatched their old foe late Friday to set up a fresh championship matchup with Wiesbaden.

Like the other teams that advanced Friday, Aviano succeeded by staying true to the principles that got it this far in the first place, even in the face of adversity like the Tigers' third-set win.

"We pulled through. We're a team," Saint standout Sydney Green said. "I think we just need to act like a team and the winning just comes on its own."

Meanwhile, Rota was proving itself all over again in the absence of graduated star and former Stars and Stripes volleyball Athlete of the Year Aspen Luna. The Admirals knocked off Bitburg 25-13, 21-25, 25-19, 25-23 to advance to Saturday’s final.

The specter of Luna’s absence slowly faded as Rota learned what it was capable of without her.

“We were all a little bit timid at first. We weren’t sure how we were going to do,” Driscoll said. “As the tournament went on we got more and more confident.

Aviano made good on its new front-runner status, cruising through pool play – including a 25-18, 25-16 defeat of Rota on Thursday - and taking out the Tigers for a title shot.

The Admirals recovered from the loss to claim the second seed in the pool and set up the successful semifinal date with Bitburg.

The Jaguars entered the tournament in an unusual predicament as both the division’s defending champion and the bracket’s eighth and bottom seed, with a young team that hardly resembled last year’s championship group. The results, however, were familiar.

Sigonella didn’t clinch its return to the title game until Friday’s final pool play game, where the Jaguars ousted tournament top seed Alconbury from championship contention with a gritty 25-22, 17-25, 15-13 victory.

Second-seeded Florence, meanwhile, cruised through the bracket unbeaten, a seven-match streak that included a 25-21, 20-25, 15-7 defeat of Sigonella early Friday.

A fourth straight win in the series will deliver Florence the title. But either way, the Division III crown – and possibly the other two – are headed for Italy.