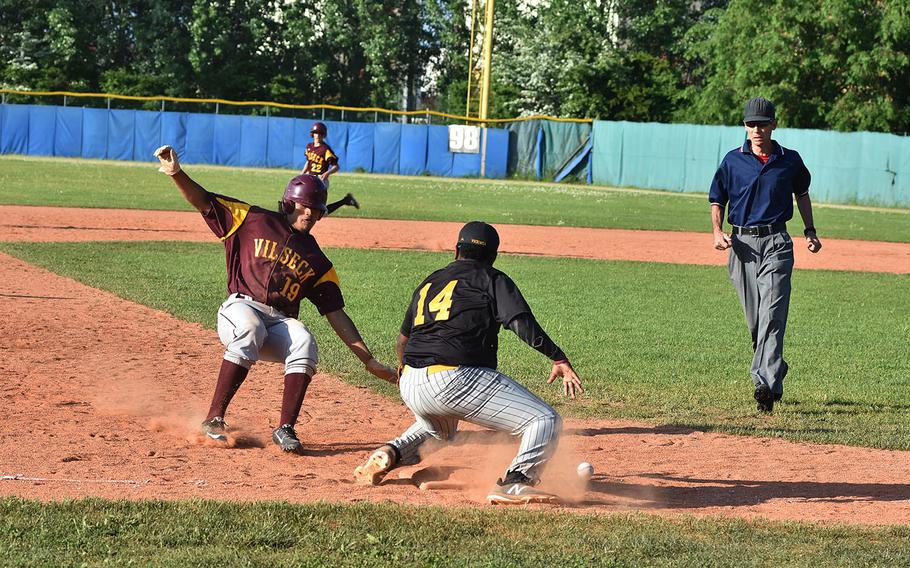 Vilseck's Chris Graveley slides into third as the ball drops to the ground in front of Vicenza third baseman Jesse Swinehart on Friday, April 27, 2018, in Vicenza, Italy. (Kent Harris/Stars and Stripes)

Vilseck's Chris Graveley slides into third as the ball drops to the ground in front of Vicenza third baseman Jesse Swinehart on Friday, April 27, 2018, in Vicenza, Italy. (Kent Harris/Stars and Stripes) 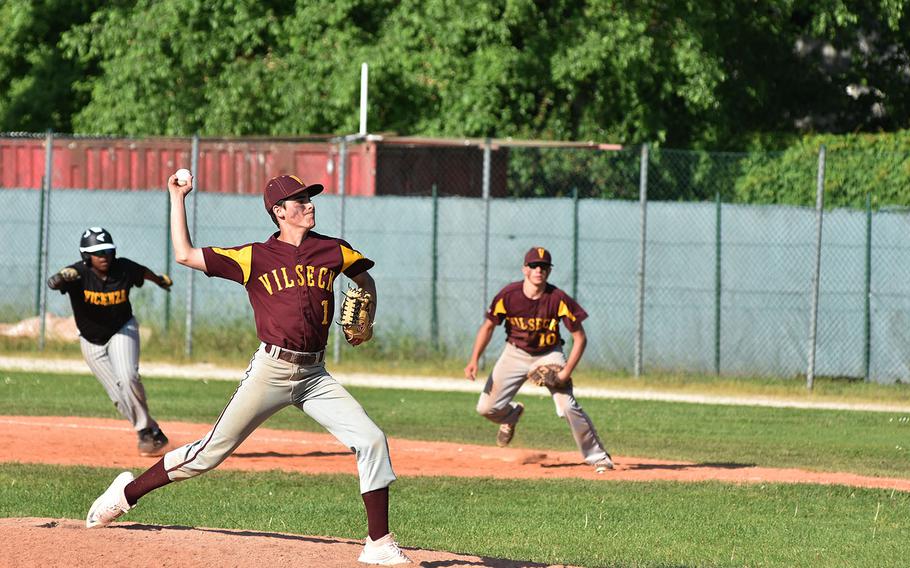 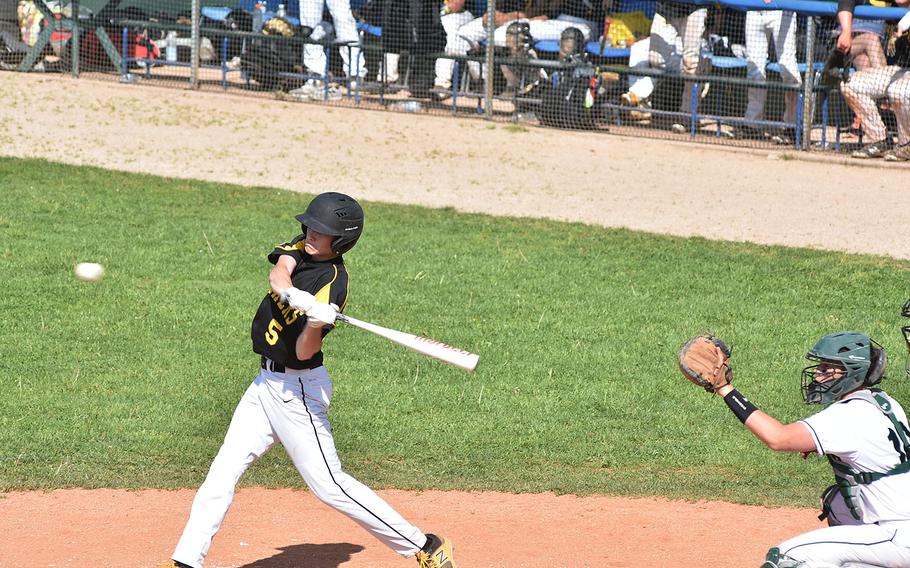 Stuttgart's Jack Bryan swings at a pitch during his team's 19-2 victory over Naples on Friday, April 27, 2018 in Vicenza, Italy. (Kent Harris/Stars and Stripes) 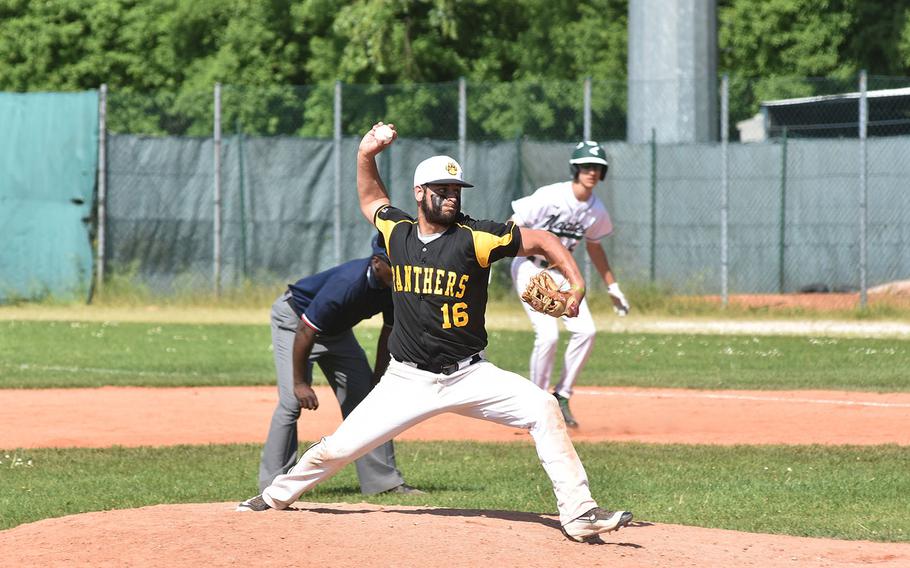 Stuttgart's Gabe Simpson delivers a pitch toward home on Friday, April 27, 2018, in a game against Naples. The Panthers won both of their games on Friday and play twice more Saturday. (Kent Harris/Stars and Stripes) 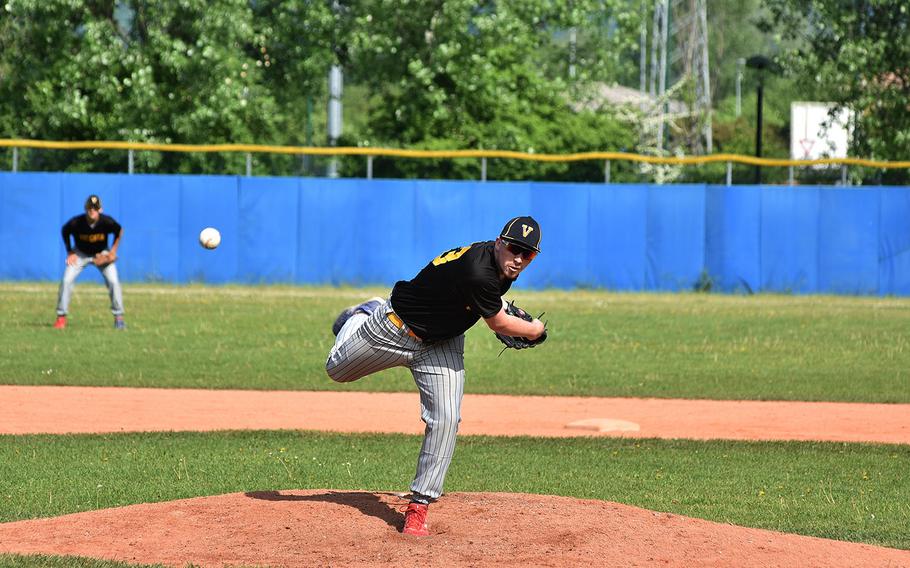 Vicenza's Brian Palmer hurls the ball toward the plate in the Cougars' 8-7 loss to Stuttgart in the first of four games in Vicenza, Italy, on Friday, April 27, 2018. (Kent Harris/Stars and Stripes) 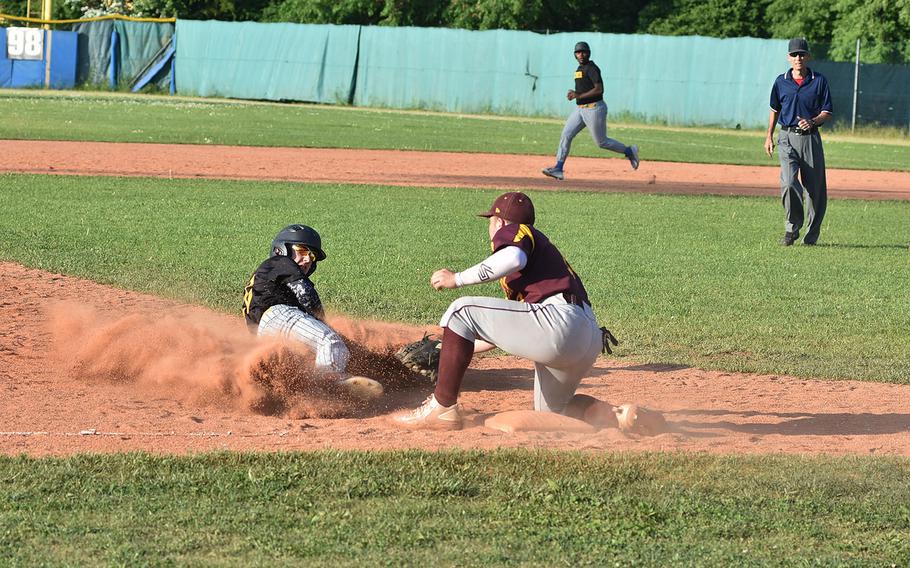 Vicenza's Jesse Samsel creates a nice cloud of dust while sliding into third base, but Vilseck's Jordan Leighty tags him out in the Falcons' 6-3 victory on Friday, April 27, 2018. (Kent Harris/Stars and Stripes)

VICENZA, Italy – Division I teams with smaller enrollments are already at a disadvantage to their larger DODEA counterparts when it comes to the number of athletes they have to turn into accomplished baseball players.

But, as Friday’s opener of a weekend series between Stuttgart, Vilseck, Naples and host Vicenza illustrates, the difference could be even more dramatic at tournament time when it comes to pitching.

A rule prohibits a pitcher who makes more than 45 pitches on one day to pitch on the next. So teams playing multiple games on multiple days need at least four pitchers unless they’re very efficient, and that doesn’t happen too often in DODEA baseball, even with time limits cutting many games far short of the standard seven innings.

“Both games my guys had that many pitches in the second inning,” Naples coach Jim Davis said after his team fell from the ranks of the unbeaten with a pair of grim losses. He’s got four pitchers with experience on his staff. One can’t play this weekend. So that means at least one other player will get some mound experience by fire.

Vilseck’s in the same situation, according to coach David Nelson. “I’ve got three with experience and three are on the developmental curve,” he said.

Depending on how the two coaches decide to allocate their pitching, Saturday’s contest between the two schools could have the scoreboard operator contemplating a new profession.

Both Davis and Nelson said the two-day event in Vicenza will help their teams prepare for the three-day European championships that will require similar adjustments.

Perennial power Stuttgart, with the second largest enrollment in Europe, is better prepared. Coach Jason Bartlett said he has six or seven pitchers he could count on. And thanks to the efforts of two of them Friday, they’ll have plenty of arms to go around on Saturday.

Stuttgart 8, Vicenza 7: The Cougars came into the game without a victory, but almost stunned the Panthers with a late comeback.

Vicenza scored four times in the final inning and had the bases loaded when the Panthers picked off a runner at second to end the game – one of a handful of baserunning blunders by the four teams on Friday.

The Cougars led 3-0 after two innings. Lisle Babcock had run-scoring hits in both the third and fourth as Stuttgart took an 8-3 advantage into the bottom of the fourth. A pair of relievers helped save the game for Jackson Bartlett, who limited Vicenza to three hits.

Vilseck 10, Naples 6: The Wildcats had won all six of their games entering Friday’s play, but looked like a different team against the two German-based schools.

“We came out a little slow (against Vilseck) and just couldn’t dig ourselves out,” Davis said.

The Falcons, who had lost all four of their games entering the contest, broke the game open in the second inning by scoring six times. Christian Brashears’ three-run double was the key blow, aided by four walks.

Stuttgart 19, Naples 2: It got even uglier for the Wildcats in the next game as they failed to get a hit against Gabe Simpson and committed seven errors in four innings.

Simpson struggled with his control, especially early when he walked four straight batters and hit another in the first to force in two runs.

But the Panthers’ bats came alive in the third, with six hits – and three Naples errors – contributing to 11 runs.

Vilseck 6, Vicenza 3: The Falcons got all the runs they needed in the first inning, scoring four times with only one hit thanks to three walks and four Vicenza errors.

Vilseck scored two more times in the third. Brian Palmer’s RBI double ignited a three-run rally for Vicenza in the bottom of the inning, but the game was then called due to the time limit.