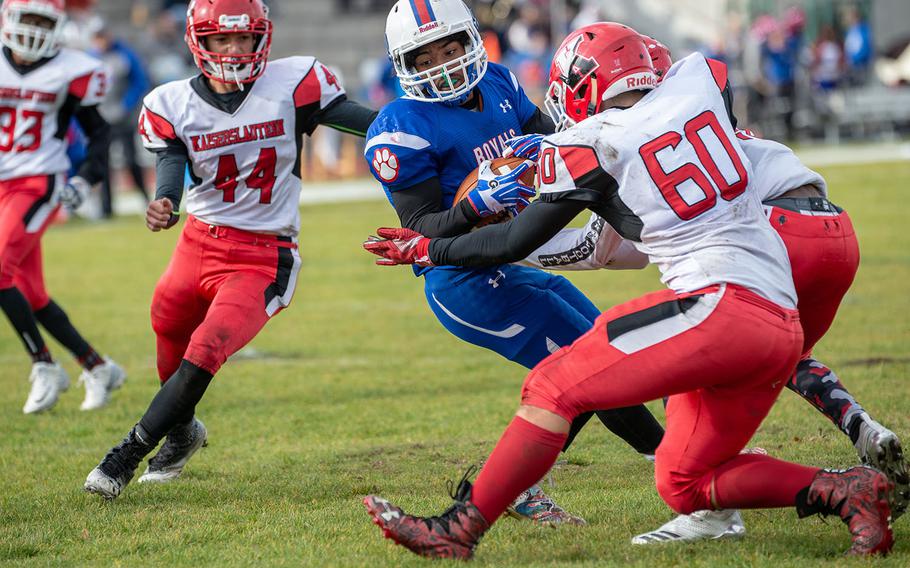 The Super Six is back in DODEA-Europe football.

This year’s slate of European championship games, set for Saturday at Kaiserslautern High School, numbers three rather than two for the first time since 2012. As a result, it’s a super set of six teams playing for titles, as opposed to the Final Four of the preceding five seasons.

The return of Division III, this time playing six-man football, is responsible for Saturday’s expansion. That game, pitting the Ansbach Cougars against the AFNORTH Lions, kicks off the day’s schedule at noon CET. The Aviano Saints take on the Naples Wildcats for the Division II title at 3 p.m. CET, while the Ramstein Royals and Lakenheath Lancers face off for the Division I crown in the day’s 6 p.m. CET main event.

Division I: Ramstein Royals v. Lakenheath LancersHow they got here The Royals have remained the unequivocal frontrunner over the course of a 6-0 regular season and cemented that status with a 48-14 rout of Kaiserslautern in last weekend’s semifinal. The Lancers (5-1 in the regular season) have succeeded by more dramatic means, including an epic comeback defeat of Kaiserslautern and two wins by a total of eight points over defending champion Stuttgart. The latter of those two wins came last weekend in a 31-26 semifinal triumph.Previous meeting Remarkably, the Royals’ matchup with their fellow future finalist was the most lopsided of their undefeated season: 40-0 in Ramstein’s favor on Sept. 29.Playoff history The Royals are a fixture of the Division I title scene; they’re on an active three-year streak of title-game appearances and have played in the championship game in six of the last seven seasons, winning three. Rising power Lakenheath is fast becoming an annual postseason presence, but the program is looking for its first Division I championship after losses in the 1997 and 2002 title games.Keys to the game While it never got going against Ramstein in September, Lakenheath has a potent offense that scored at least 28 points in every game save for the shutout against Ramstein. The Lancers will need to construct long, preferably points-producing drives to keep the Royal offense off the field and the score close. Lakenheath probably can’t count on more late-game heroics, as Ramstein tends to get stronger as the game goes on.

Division II: Naples Wildcats v. Aviano SaintsHow they got here The Wildcats slipped up briefly early in the season with a 14-13 loss to rival Vicenza, but recovered to win their final four games and clinch a playoff spot on the final day of the regular season. Aviano was the undefeated frontrunner all season, securing its spot even before its late showdown with Naples.Previous meeting The Wildcat beat the Saints 41-36 on Oct. 20 in a game that might have been skewed by motivations - Aviano was already assured of its spot in the final, while the Wildcats needed the win.Playoff history Befitting a year of upheaval in DODEA-Europe football, this championship matchup is a fresh one. Aviano is in the title game for the first time since its 1998 championship; Naples has reached three finals and lost them all, most recently in 2012.Keys to the game Both teams have prolific and versatile offenses spearheaded by big-time playmakers. The team that make a few game-changing plays on the other side of the ball is likely to come out ahead.

Division III: Ansbach Cougars v. AFNORTH LionsHow they got here The Cougars didn’t have the numbers to field an 11-man team in 2017, but they returned with a vengeance when six-man ball was introduced this fall. Ansbach crushed every team it encountered this fall, scoring at least 48 points in all five of its victories. AFNORTH had an easy time with every opponent save for Ansbach.Previous meeting AFNORTH’s 75-46 margin of defeat was as respectable as anyone’s in Ansbach’s overwhelmingly dominant fall.Playoff history The Cougars are one of the more storied programs in DODEA-Europe football history, with two separate back-to-back Division II title reigns in the last 11 years, most recently in 2014 and 2015. AFNORTH was among the stronger programs in DODEA-Europe’s former iteration of Division III, reaching the 2006 and 2008 title games and winning the latter.Keys to the game AFNORTH will have to find some creative solution to Ansbach’s irresistible offensive onslaught if it’s to make a game of it Saturday.