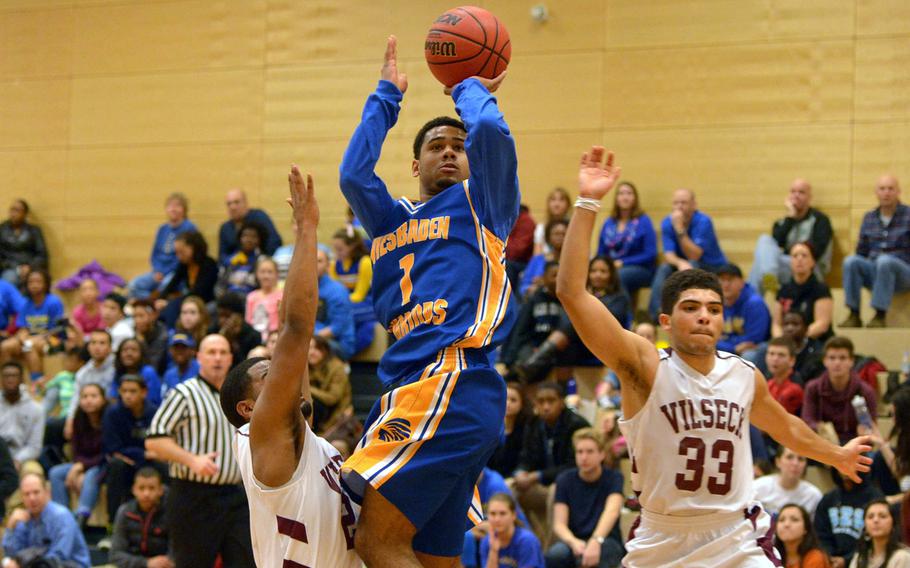 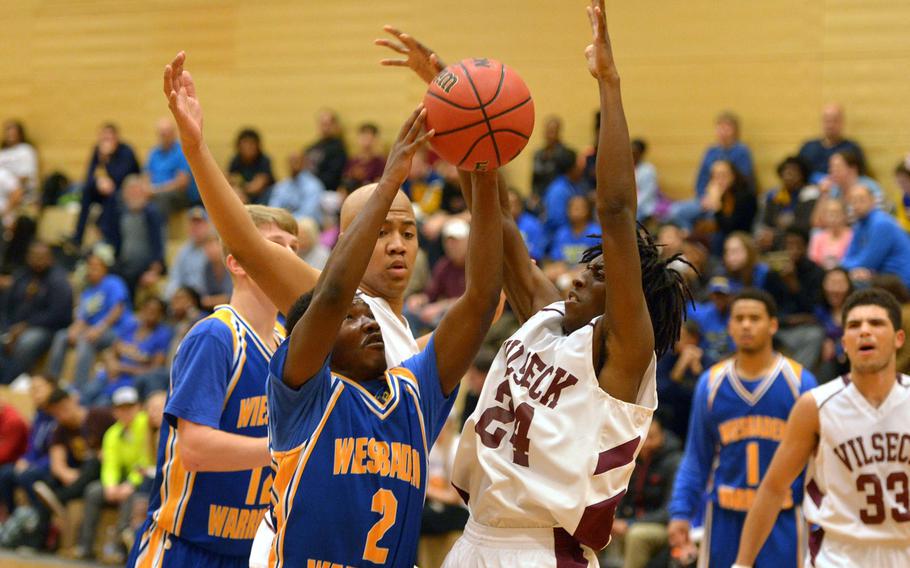 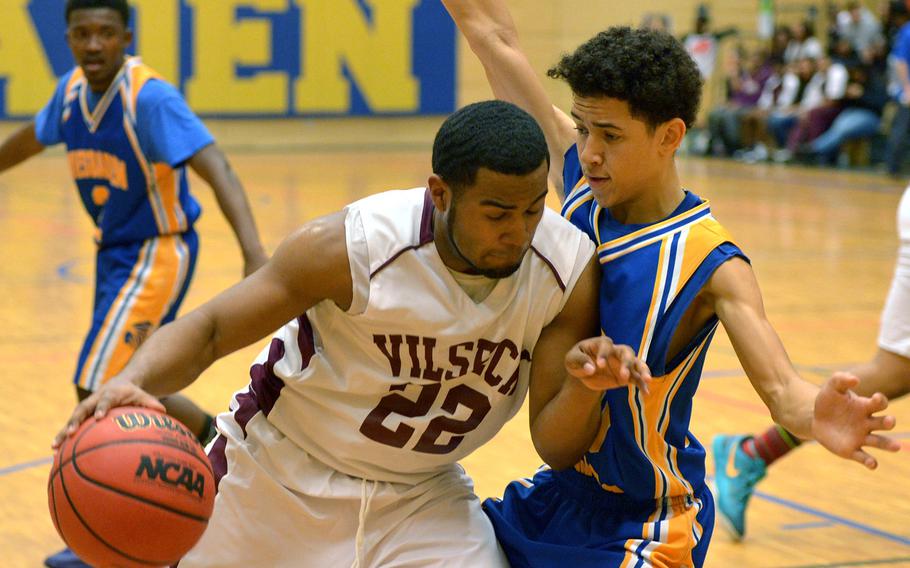 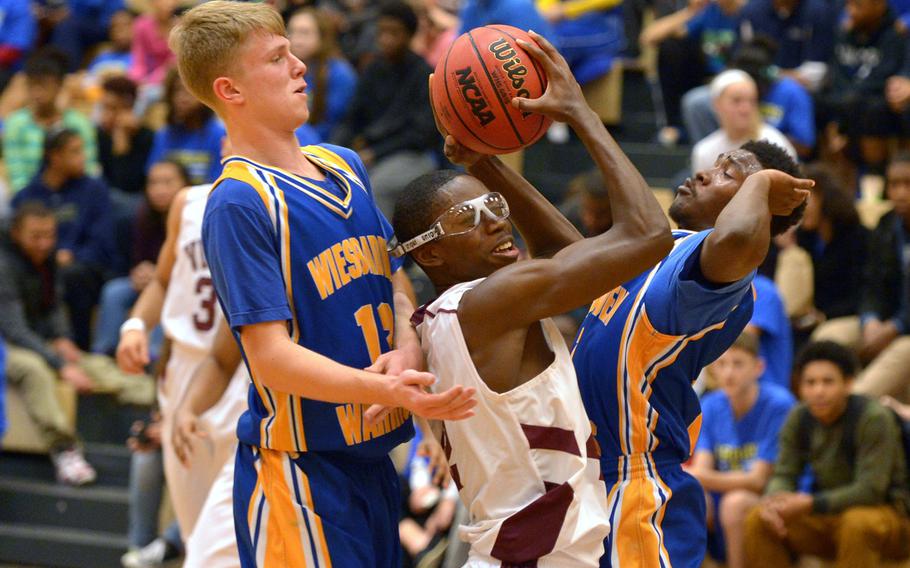 Vilseck's Ken Pickney tries to squeeze through the Wiesbaden defense of Gavin Adams, left, and Keyshaun Green. Green was called for a foul on the play. Wiesbaden beat Vilseck 56-44, Saturday, Jan.10, 2015. (Michael Abrams/Stars and Stripes) 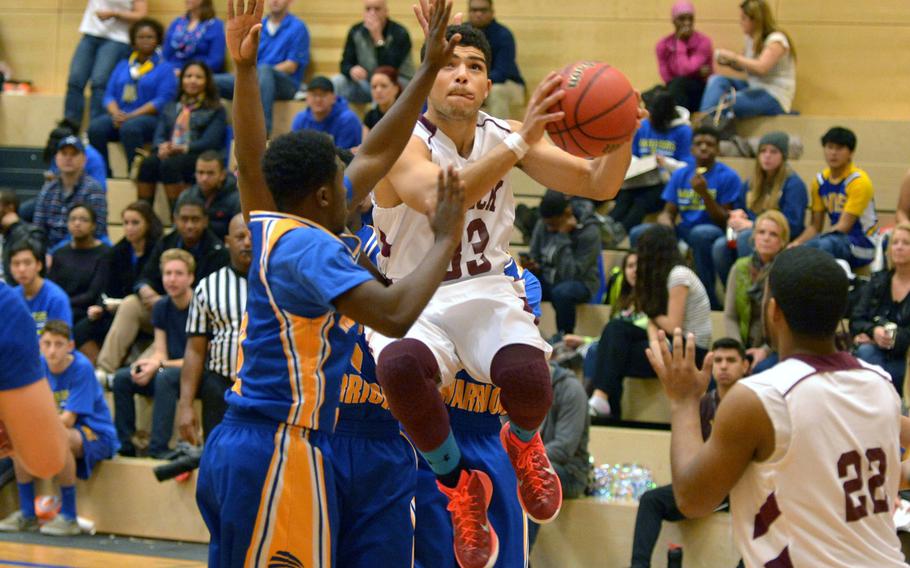 Vilseck's Gabriel Lewis aims for the basket as he goes in against a trio of Warriors led by Keyshaun Green, left. Wiesbaden beat Vilseck at home 56-44, Saturday, Jan.10, 2015. (Michael Abrams/Stars and Stripes)

The Division III Sigonella Jaguars continued to hold their own among larger Italian rivals Saturday, blasting visiting Vicenza 83-59 to earn a weekend doubleheader split with the Division I Cougars.

Chris Moore produced another in a string of prolific performances, scoring 26 points for the second consecutive game and adding 10 rebounds and six steals.

Thomas Wray piled up a diverse 22 points in support, hitting four of seven three-point attempts while mixing in close-range scores and putbacks off offensive rebounds.

Their combined efforts was enough to even the score with Vicenza, the second time this season that the tiny Jaguars have split a pair of games with a Division I opponent. Sigonella answered a season-opening 43-40 loss to Naples on Dec. 5 with a gritty 46-44 win the next day.

Emerging favorites for the Division III title, Sigonella will play at and near its own level over the balance of the regular season.

The Jaguars face divisional foes Marymount and Florence along with Division II squad Aviano before proceeding to the postseason.

Wiesbaden 45/56, Vilseck 39/44: At Wiesbaden, the Warriors recorded two double-digit wins over the Division I rival Falcons.

Teammate Anthony Little worked the glass for a combined 18 boards on the weekend.

Coming in with a 4-0 record stockpiled against Division II competition, the new-look visitors quickly proved they'll be no pushover when it comes to defending their title next month. The Panthers built a five-point lead after one quarter and pushed ahead by 12 at halftime in handing the Raiders their first loss of the season.

The Panthers, featuring an almost entirely new rotation from their last two championship rosters, will visit Wiesbaden next weekend in a rematch of last year's Division I title game.

Ty'Rick Riggins scored a game-high nine points on Friday, Terrell Staten went for 18 on Saturday and K.C. Evans scored a combined 18 points on the weekend to lead the onslaught.