SHAPE needs an upset or two to continue postseason run 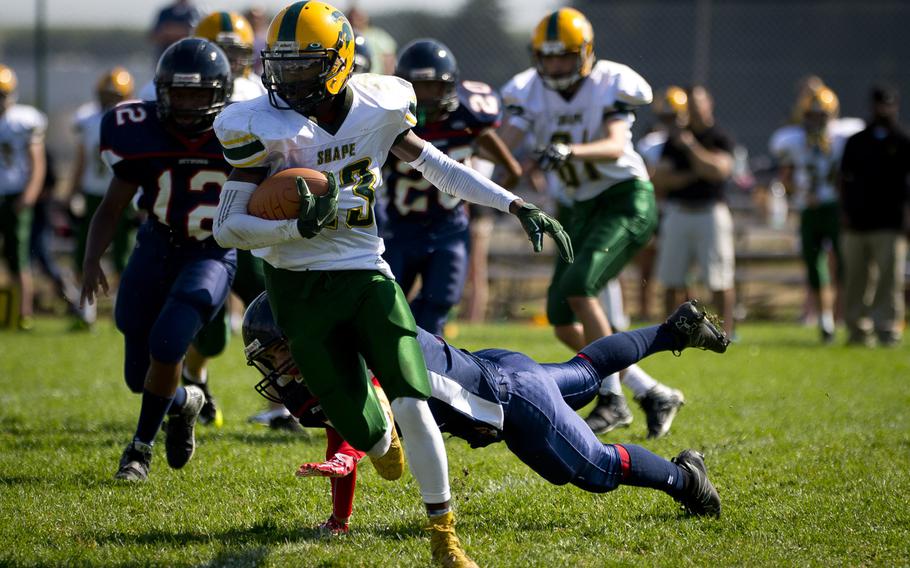 SHAPE's Reginald Kirklen runs past a Bitburg defender in Bitburg, Germany, on Saturday, Sept. 17, 2016. (Michael B. Keller/Stars and Stripes)

Fourteenth in a series of DODEA-Europe high school football previews.

The SHAPE Spartans have lurked on the fringes of DODEA-Europe Division II football contention in recent seasons. Unfortunately, those fringes are about to be eliminated.

With the Division II ranks dwindled to 10 teams, only four will qualify for the 2017 playoffs, down from usual eight-team quarterfinal bracket. The division’s entrenched powers are likely to transcend that issue, while the truly struggling programs will be satisfied with any measure of success. It’s teams such as SHAPE that will feel the squeeze.

In 2016, SHAPE snuck into the playoffs despite a 2-4 overall record, setting up a shutout loss to Ansbach in the quarterfinals. That season was similar to the 2015 campaign, in which the Spartans posted a 1-2 regional record, claimed a low playoff seed and took a 28-8 loss to a strong Hohenfels squad.

Despite those middling recent performances, SHAPE isn’t far removed from greater glory. The Spartans reached the Division II European championship game in 2013 after upsetting Ansbach 23-22 in a thrilling semifinal. A year later, the Spartans posted an unbeaten record in the division’s North region.

SHAPE will face an uphill climb to return to the playoffs under this year’s streamlined system. The Spartans share a division with defending champion Rota and Spangdahlem, the persistent powerhouse formerly known as Bitburg. The Spartans will likely have to knock off at least one of the two to punch a postseason ticket, while holding off threats from local rivals AFNORTH/Brussels and International School of Brussels.

The 2017 Spartans boast a nice mix of experience and fresh potential, perhaps best embodied by new senior quarterback Jevon Wong. He'll operate what head coach Pedro Soto Jr. described as a "spread-option type of offense" utilizing weapons such as sophomore running back Corey Oliver and working under the protection of what figures to be a solid offensive line.

With 11 returning players back among the Spartans' robust 40-player roster, Soto has plenty of options from which to construct effective offensive and defensive units.