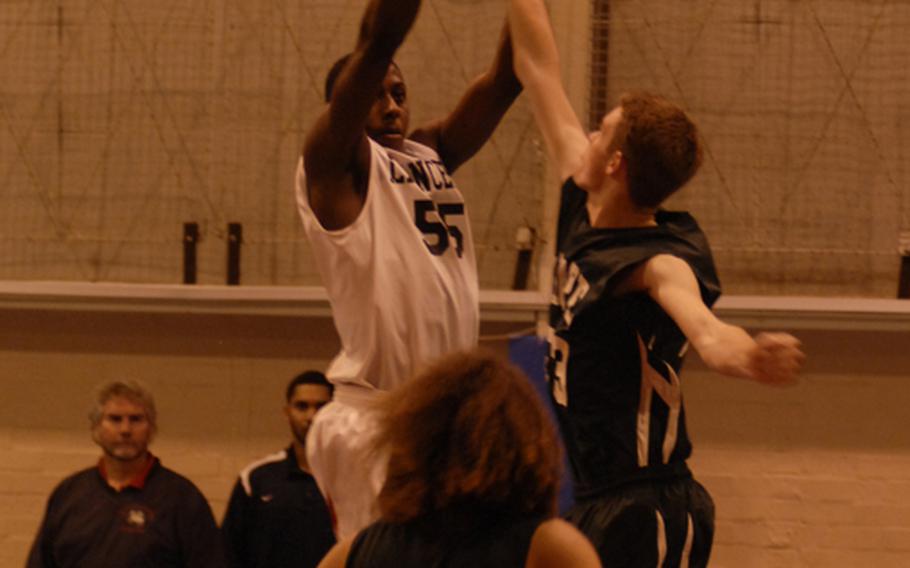 Buy Photo
SHAPE's Paris Johnson tries to save the ball by bouncing it off of Lakenheath's Jourdan Hodge during a Friday night game between the two teams. SHAPE won 43-42. (David Hodge/Stars and Stripes) 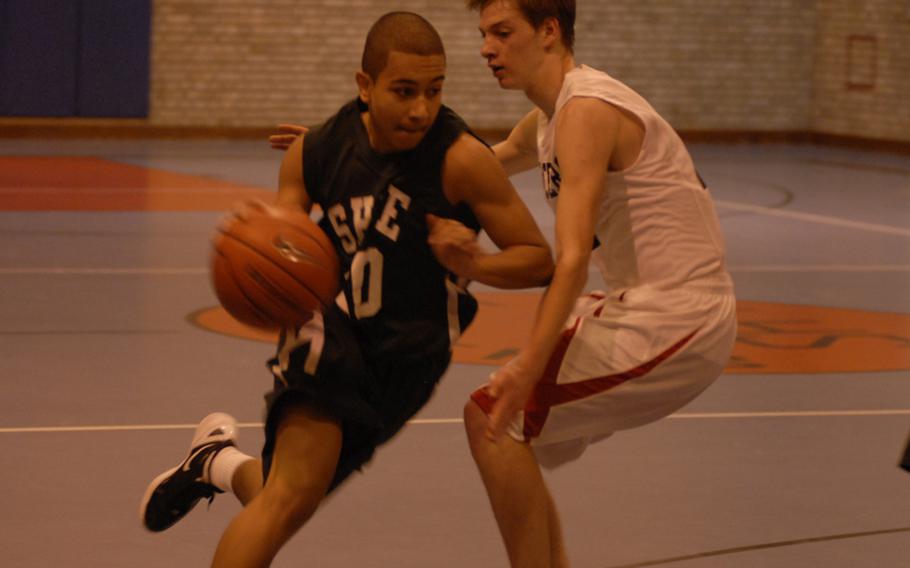 RAF LAKENHEATH, England &mdash; The Friday night matchup between DODDS-Europe Region I rivals SHAPE and Lakenheath produced action-packed basketball and one overtime as a boys and girls team from each side came away with victories. In the first action for Lakenheath in the 2011-12 season, the Lady Lancers went down early, only to rally to tie the game at 40 and force an overtime. But in overtime the Lady Spartans defeated the Lancers by a free throw: 43-42. &ldquo;We didn&rsquo;t box out and we kept getting&hellip; fouls, but when we needed to make a basket they came through,&rdquo; said SHAPE&rsquo;s head coach Dotty Thompson. &ldquo;I think our (full court) press is what broke them down.&rdquo;Eugina Rhett had 14 points to lead SHAPE, with Teresa Muldoon scoring 10 points, grabbing seven rebounds and adding five steals. Jamie Gamboa finished with seven points.Lady Lancer coach Matt Martinez said he thinks his team&rsquo;s errors could be attributed to it being the first game of the season.&ldquo;It&rsquo;s not bad for our first game,&rdquo; Martinez said. &ldquo;I&rsquo;m happy with their intensity and hustle.&rdquo;After losing two seniors in Jasmin Walker and Shaionica Speight, Martinez started four sophomores and a senior in his starting rotation on Friday.Jourdan Hodge had 21 points and 20 rebounds in a losing effort. Kristen Reed scored 11 points and had five rebounds.SHAPE moved to 3-0 on the season. Lakenheath hopes to get its first win when the two teams meet again Saturday. Lakenheath boys 66, SHAPE 56: The Lancers were down seven points at halftime, but scored 44 points in the second half for the victory.Brinsley Walker chalked up scoring honors for Lakenheath with 24 and also had nine rebounds and three steals. K.J. Holloway score 14 points and Nick Winkie added 11 points and nine rebounds.Connor Manning led the Spartans with 17 points. Alizi Douglas had 16 points and seven rebounds.It was Lakenheath&rsquo;s season opener, while the Spartans fell to 0-3.hodged@estripes.osd.mil

CorrectionGlenn Jones was misidentified in a picture caption in a earlier version of this article.