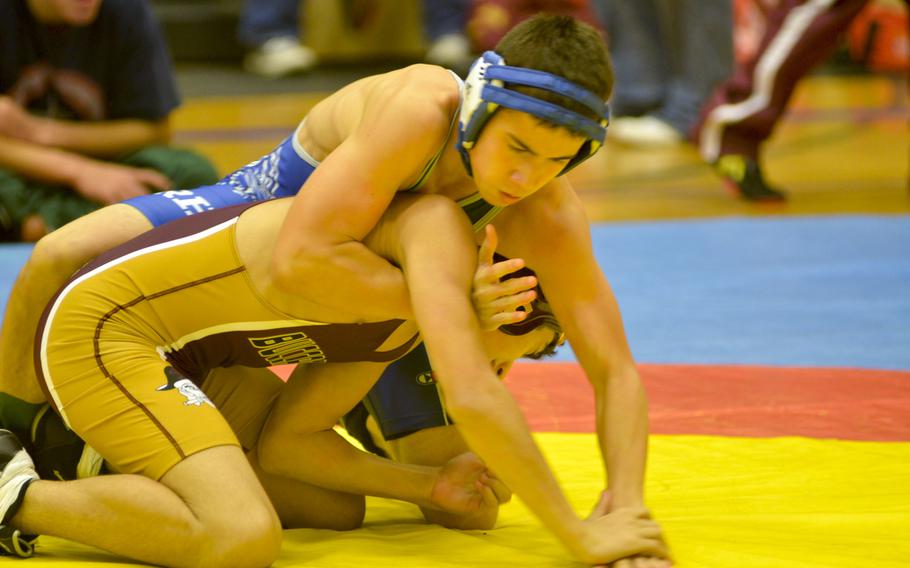 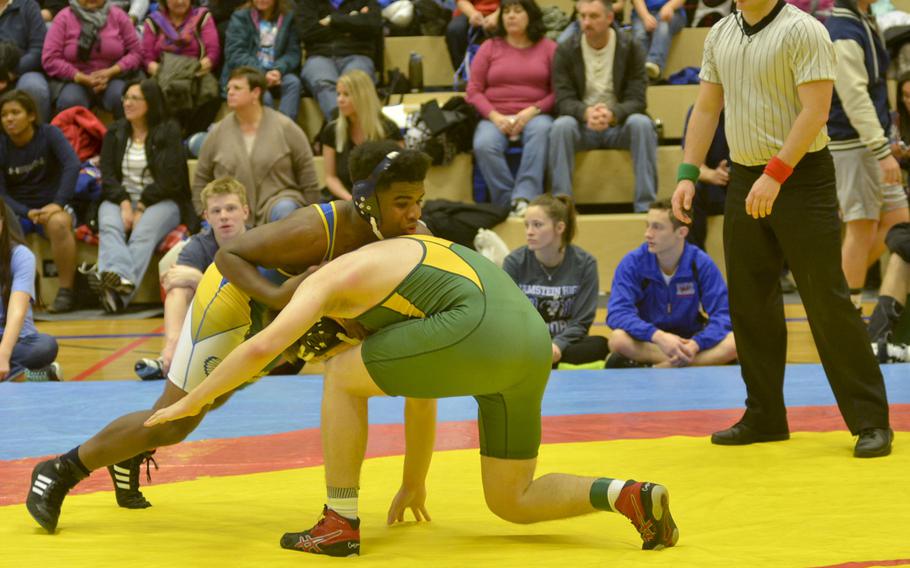 Wiesbaden's Chris Hobson gets the upper hand over SHAPE's Logan Mans during a 182-pound matchup at a five-team meet Saturday in Wiesbaden. Baumholder, Bitburg, and Ramstein were also represented, with Ramstein taking top team honors. (Dan Stoutamire/Stars and Stripes) SHAPE's Chris Davidson attempts to place a hold on Ramstein's Taylor Mendenhall during a 220-pound clash in a five-team meet Saturday in Wiesbaden. Mendenhall would win the weight class, with Davidson in third. (Dan Stoutamire/Stars and Stripes) 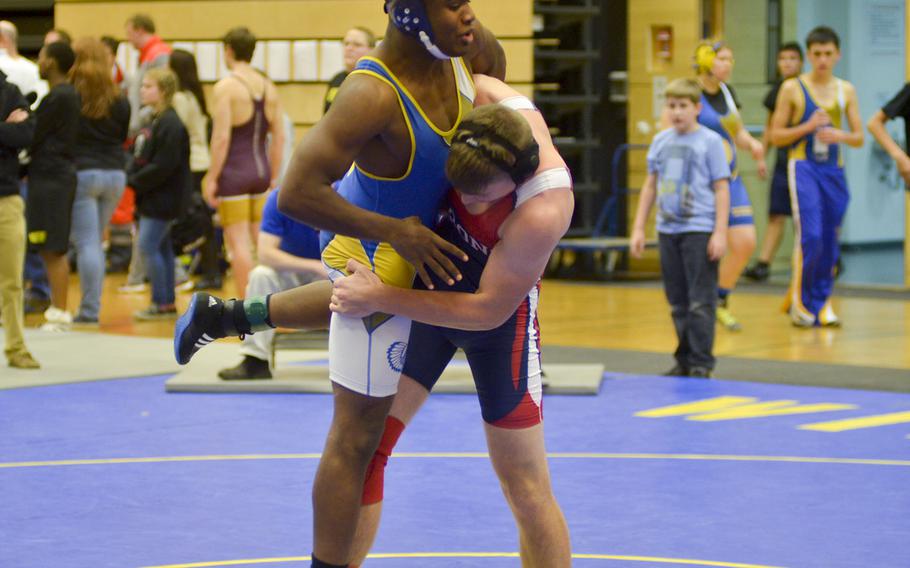 Bitburg's John Blake grapples with Wiesbaden's Chris Hobson during a 182-pound division matchup Saturday in Wiesbaden. Blake, a runner-up in a meet last weekend, won the weight class this time around. (Dan Stoutamire/Stars and Stripes) Wiesbaden's Deven Holland celebrates after defeating his opponent in the 220-pound division at a five-team meet held Saturday in Wiesbaden. Holland finished as runner-up in the weight class to Ramstein's Taylor Mendenhall. (Dan Stoutamire/Stars and Stripes) Gabriel Charlifue and Alec Pantoja, both of Wiesbaden, grapple in a 152-pound matchup Saturday at Wiesbaden High School. Charlifue won the weight class in the five-team meet, with teammate Pantoja taking fourth. (Dan Stoutamire/Stars and Stripes)

WIESBADEN, Germany — The Ramstein Royals are in a transition year, according to their coach. But they still had the depth and overall talent to triumph in a DODDS-Europe five team wrestling meet Saturday, with top places in eight of 13 weight classes.

Wiesbaden, SHAPE, Baumholder and Bitburg also had teams at the meet.

“For a rebuilding team, I thought they did really good,” Ramstein coach Steve Kennedy said. “We saw some strong, positive, focused direction that we wanted.”

Kennedy said there are still shortcomings that his team need to improve on if they want to enjoy similar success at the European championships at the end of February.

“At the same time, we saw a lot of things that we’ve got to work on if we want to take on the big boys like Stuttgart and obviously Lakenheath, who we will see very soon,” he said. “We’ve got a lot of work to do still.”

One of the tone-setters for the Royals this year has been junior 113-pounder David Kingery. He dedicated his offseason to physical and mental improvement, spending long hours training and watching film of himself and Olympian Jordan Burroughs.

“Wrestling is just addictive,” Kingery said. “It teaches you a lot about yourself that you really didn’t know before.”

Wiesbaden’s Zach Krapf, who won the meet’s 160-pound division, has been a mainstay of his squad for years, and the senior is now joined by younger brother Joey, a freshman wrestling in the 126-pound class who finished second in his first high school meet.

“It’s definitely cool,” Zach said of competing alongside his brother. He’s also been sharing tips he’s learned along the way.

“I feel like he has a lot of potential and I think I can help him out and we can help each other. He’s a lot younger and smaller so it’s hard to train with him, but recently I’ve been helping with conditioning and keeping his weight.”

The younger Krapf is hardly the only newcomer to the Warriors lineup, Zach said.

“We have a lot of new kids who are new to the sport and this is their first meet,” he said. “They didn’t quite understand exactly what they were getting themselves into, and today was kind of an eye-opener for them.”

SHAPE finished in third, behind Ramstein and Wiesbaden, and coach Richard Smith is seeing improvement from his charges in their second meet of the season.

“We still have the beginners’ woes, kids who pin themselves more than they pin others, but then we’re overcoming those things and actually doing what we want to do,” he said. “Whether the numbers show it or not, or performance level was much higher.”

Smaller schools Baumholder and Bitburg did well, each of them represented by a group winner – Baumholder’s Yorel Smalls in the 195-pound class and Bitburg’s John Blake in the 182-pound class.