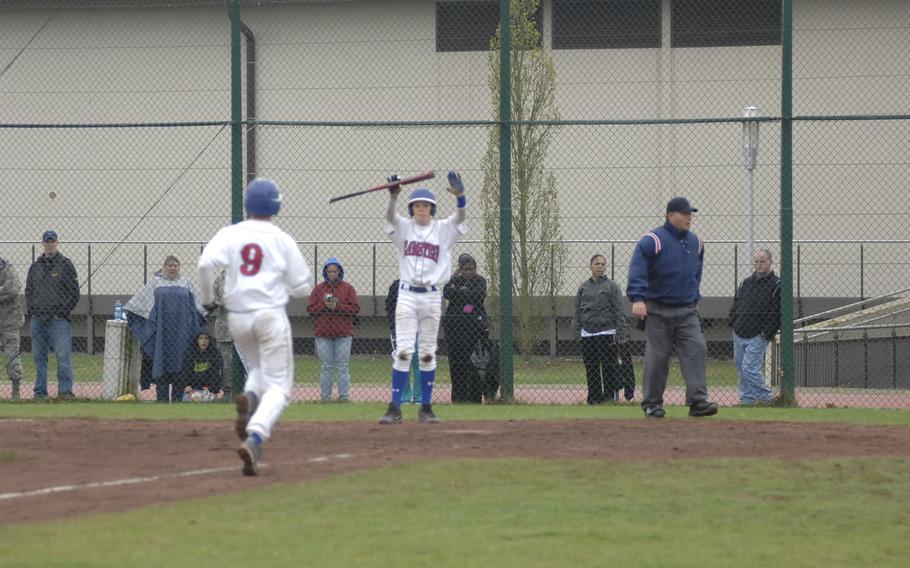 Ramstein's Woody Woodruff motions for teammate Patrick Young to score standing up in the Royals' 18-1 victory over Kaiserslautern on Friday. (Gregory Broome/Stars and Stripes)

Ramstein's Woody Woodruff motions for teammate Patrick Young to score standing up in the Royals' 18-1 victory over Kaiserslautern on Friday. (Gregory Broome/Stars and Stripes) 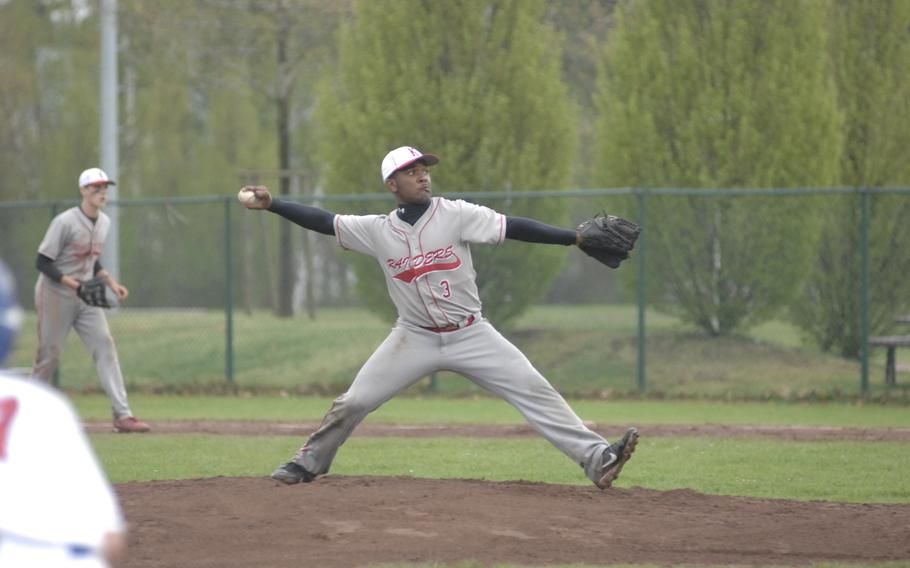 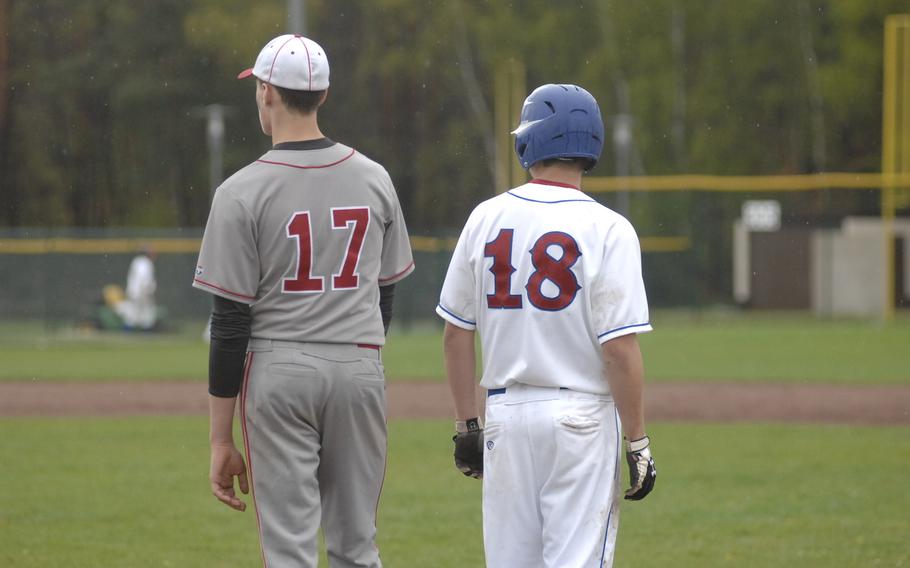 Ramstein's Robbie Levin, right, stands on first base next to Kaiserslautern's Chris Jastrab in Ramstein's 16-0 victory on Friday. (Gregory Broome/Stars and Stripes)

RAMSTEIN AIR BASE, Germany – Kaiserslautern battled, quite literally, until the final out.

That was one of the few highlights over the course of a long, dreary evening of lopsided baseball for the Red Raiders, a team hampered by inexperience and a makeshift pitching staff. The good times rolled for the Royals, however, in three-inning victories of 16-0 and 18-1.

“What we try to always do is have our guys always be on top of the game,” Yost said. “We always say, ‘Play like it’s a zero-zero ballgame.’ Have quality at-bats and make sound defensive plays that we need to.”

His charges got the message.

“We played well as a team today. Our bats came alive for the first time probably all year,” said Royals junior Ryan Burk, who totaled three hits and two RBI over the doubleheader and pitched a complete-game one-hitter in the opener. “We really hit the ball.”

Kaiserslautern coach Chris Grogan, meanwhile, can only look for signs of progress from a prohibitively young team. Grogan was unable to start Jastrab, his ace pitcher, due to the senior lefty’s long 13-strikeout outing April 20 against SHAPE.

“We’re trying to develop a pitching rotation that we just don’t have yet,” Grogan said. “We saw a lot of, just, mental mistakes that we’re gonna clean up.

Regardless, the vestiges of the Ramstein-Kaiserslautern rivalry live on.

“You want to win this game,” Burk said. “All or nothing.”

At this point in the historic DODDS-Europe rivalry, “all or nothing” is just a bit too apt.

“It’s always fun to get K-Town in here,” Yost said. “The game wasn’t exactly what we wanted it to be as far as competitiveness, but they’re a good team and they can easily bounce back from this and make it a good rivalry come tournament time.”

For Grogan, that means building his team’s confidence despite outcomes like Friday’s.

“To get them to think that they can win is the hard thing,” Grogan said. “Just kind of get them to believe in themselves.”