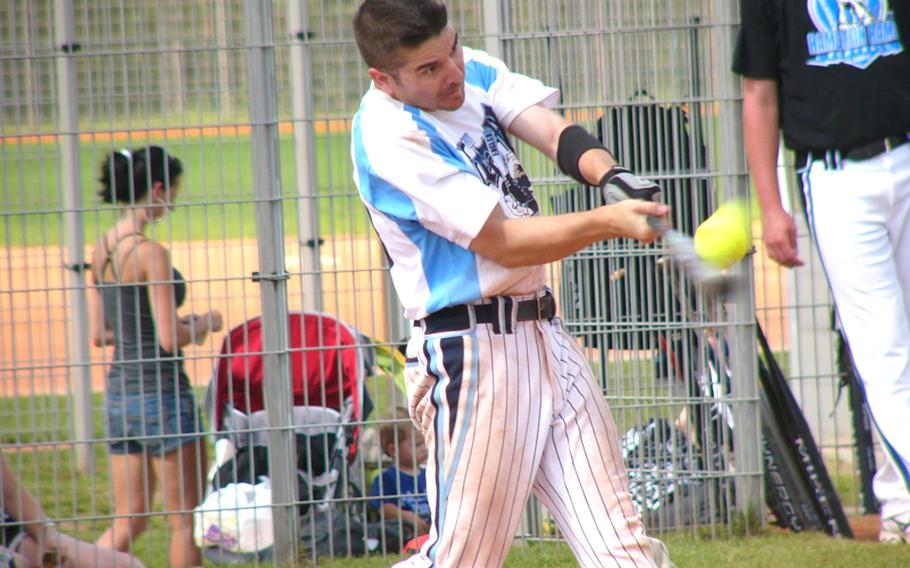 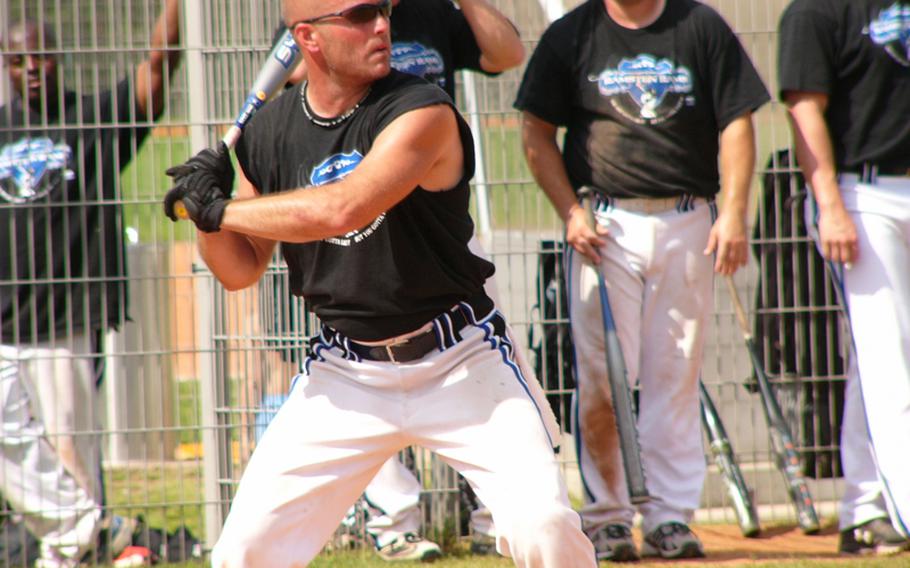 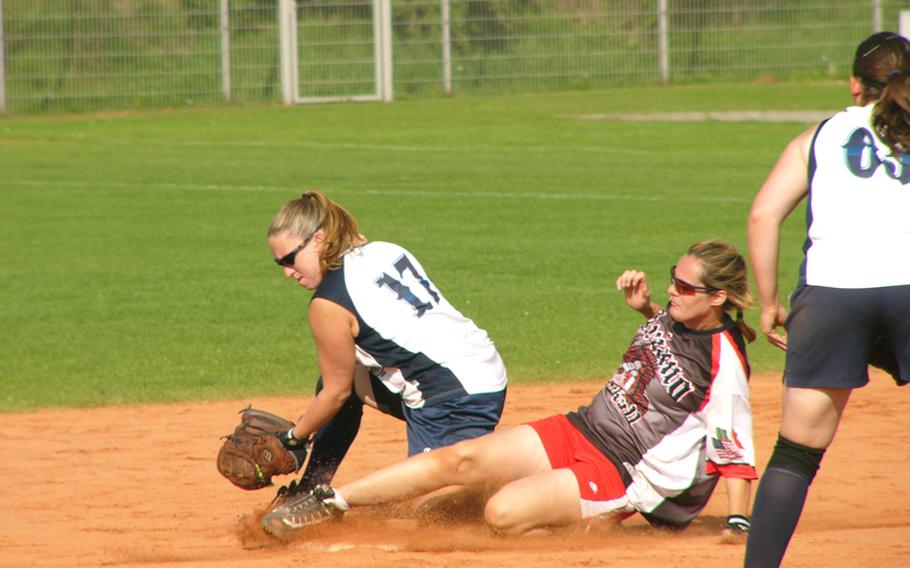 Aviano pitcher Mary Wilkerson slides safely into second base Sunday before Lakenheath shortstop Christy McMillan can apply the tag as winning pitcher Vanessa Goodman (03) backs up the play. Wilkerson, who had singled, advanced on a fourth-inning fly out by teammate JoJo Martinez, but was left stranded in Aviano's 4-3 U.S. Forces-Europe title-game loss to Lakenheath at Grafenwoehr, Germany. (Rusty Bryan/Stars and Stripes) 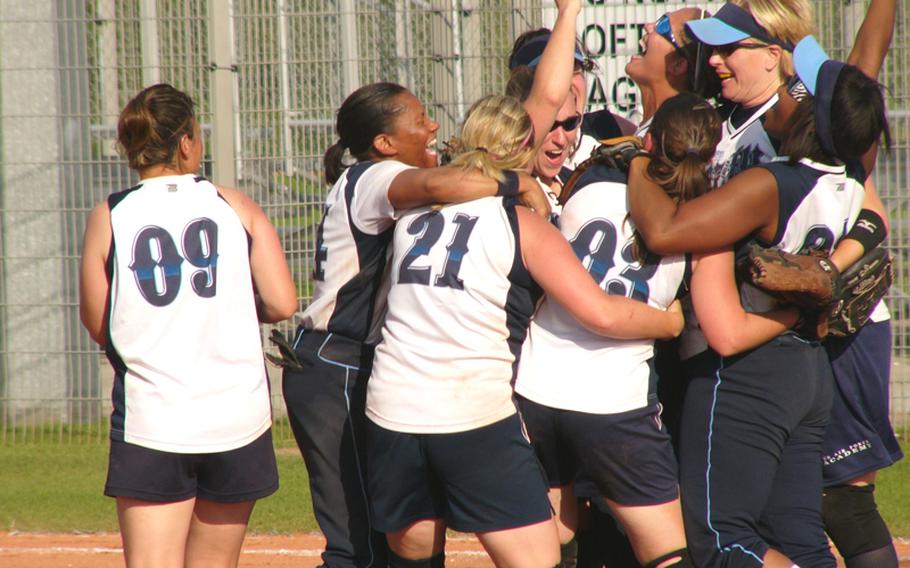 GRAFENW&Ouml;HR, Germany &mdash; The Ramstein men and Lakenheath women walked off with championship trophies from the Air Force-dominated 2010 U.S. Forces-Europe slow-pitch softball tournaments this past weekend.

Ramstein clean-up hitter Jason Acre slugged a three-run homer in his first at-bat to erase Lakenheath&rsquo;s early 2-0 lead, then repeated the feat in the bottom of the sixth to give the Rams the 10-run lead that ended the game an inning earlier than scheduled.

&ldquo;We&rsquo;re 9-for-10 in tournaments in Europe this season,&rdquo; Acre said after his 2-for-3 afternoon, which also included a walk and run scored during the Rams&rsquo; decisive nine-run fifth inning.

The power-hitting Rams &mdash; who clubbed 22 home runs in four games &mdash; posted its big fifth inning by playing some small-ball, including three walks, three doubles and two singles. In the process, they eased the mind of Army-Europe sports official Tony Lee.

&ldquo;For a while there,&rdquo; he told the Rams as he handed them their medals and trophy, &ldquo;I thought we were going to run out of softballs.&rdquo;

According to Acre, the victory came just in time for the Rams, who hammered Wiesbaden 26-0, Spangdahlem 15-4 and Stuttgart 31-9 on the way to the final.

&ldquo;Ramstein&rsquo;s going through a readiness exercise,&rdquo; he said before departing on the three-hour-plus drive home. &ldquo;A lot of guys have to go to work tonight.&rdquo;

A late defensive play was the key for the Lady Eagles, who brought just the minimum 10 players required to field a slow-pitch team.

After Aviano had cut the deficit to 4-3 in the sixth inning,

With runners on first and third, Aviano&rsquo;s Gracey Martinez hit a hard grounder between second and first. But Lakenheath second baseman April Taylor moved far to her left to snare the grounder, then threw Martinez out from her knees to end the threat.

&ldquo;I was afraid I wouldn&rsquo;t get there,&rdquo; Taylor said of her lead-saving play.

Lakenheath&rsquo;s co-MVP, shortstop Christy McMillan got her team started with a leadoff, inside-the-park home run in the top of the first inning. The homer was crucial, coming as it did after Aviano forced the if-game with a 10-7 victory in Sunday&rsquo;s first game.

Aviano responded in the bottom of the inning on a two-run single by Martinez, but Lakenheath retook the lead, 3-2, in the third when Lindsey Freeman stole home on a double-steal, and Kay Elder singled home McMillan.

McMillan scored Lakenheath&rsquo;s fourth run in the fifth on an Elder ground out.

Aviano cut its deficit to 4-3 in the sixth when JoJo Martinez singled home Alexia Marro, before Taylor made her rally-killing play.

Lakenheath pitcher Vanessa Goodman, who shared the MVP award with McMillan, secured the title the next inning, retiring the Dragons on a ground-out, a pop-up and a strikeout.

&ldquo;I&rsquo;m not really a pitcher,&rdquo; said Goodman, who allowed just six hits. &ldquo;I&rsquo;m an outfielder, but we had a hard time getting enough players to come here.&rdquo;