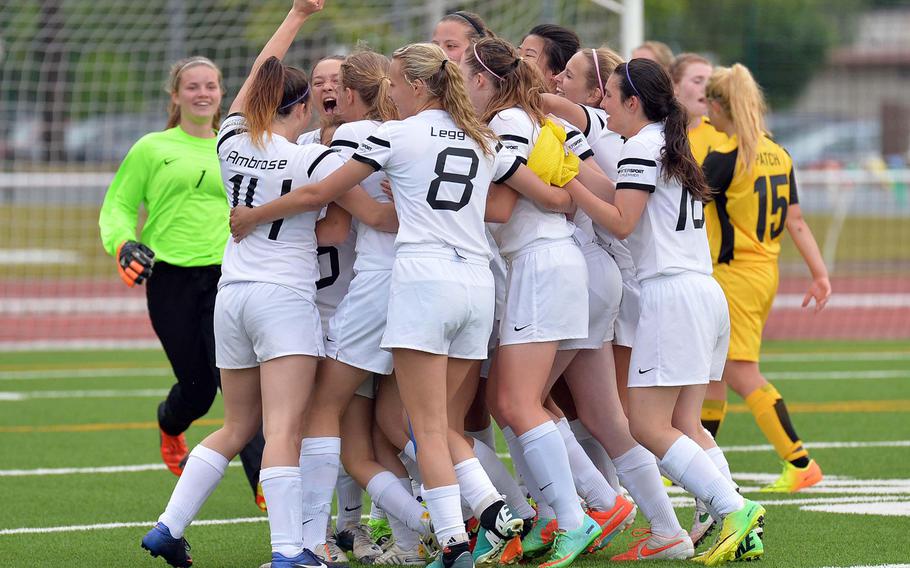 Buy Photo
The Ramstein Royals celebrate their 1-0 win over Patch in the Division I final at the DODDS-Europe soccer championships in Kaiserslautern, Germany, Thursday, May 22, 2014. Ramstein and Patch have played for the DODDS-Europe Division I girls soccer crown every year since 2011. The teams have alternated titles over that span, with Patch winning in 2011 and 2013 and Ramstein winning in 2012 and 2014. (Michael Abrams/Stars and Stripes)

If history is any indication, this weekend’s Royals-Panthers girls soccer game is only a preview of the upcoming main event.

Ramstein and Patch have played for the DODDS-Europe Division I girls soccer crown every year since 2011. The teams have alternated titles over that span, with Patch winning in 2011 and 2013 and Ramstein winning in 2012 and 2014.

A fifth straight matchup is looking increasingly likely, as the Royals and Panthers are the only remaining unbeaten teams in Division I despite rather difficult schedules.

Ramstein has been outright dominant, recording four lopsided shutout victories before finally yielding a goal in a 6-1 win over Wiesbaden on April 18.

Patch’s record is marred by a 1-1 tie with that same Wiesbaden team, but the Panthers have otherwise been untouchable. Last weekend, they routed both of Division I’s new contenders, Vicenza and Naples, by a combined 8-1 score.

Expect a much closer match on Saturday; it’s the only kind the two teams play anymore.

The Panthers beat Ramstein 1-0 for the 2013 title. In their next meeting, during the 2014 regular season, Ramstein edged the Panthers 4-3. Over the last two days of the tournament, the teams battled to a near-draw: Patch beat Ramstein 3-2 in a shootout to advance to a title-game rematch with Ramstein, which the Royals won by a 1-0 score.

Both teams have the defensive chops to throw a shutout Saturday, as neither team has yielded more than one goal in any game this season. They also have the offensive firepower to blow a game open behind the likes of Ramstein forward Ebony Madrid and productive Panthers Janey Greenberg, Kaitlyn Farrar and Danielle Mannier.

While the rivalry isn’t quite as well-formed on the boys soccer side, it might be an equally compelling game.

Patch and Ramstein have one loss each on the season; the Panthers lost to Naples last weekend, while the Royals fell to Vilseck in their March 21 season opener. But each remains a strong contender in a crowded field that also includes Naples, Kaiserslautern and International School of Brussels.

The burgeoning Patch-Ramstein feud continues over the final weeks of the regular season. The baseball and softball teams stage championship-game rematches May 9 at Ramstein; the Royals won last year’s baseball title over Patch, while the Panthers prevented a Ramstein spring-sports sweep with a win in the softball championship game.

On May 16, Patch’s rising track program rounds out the DODDS-Europe regular season in a six-team meet with host Ramstein.