Ramstein heats up to sweep Kaiserslautern 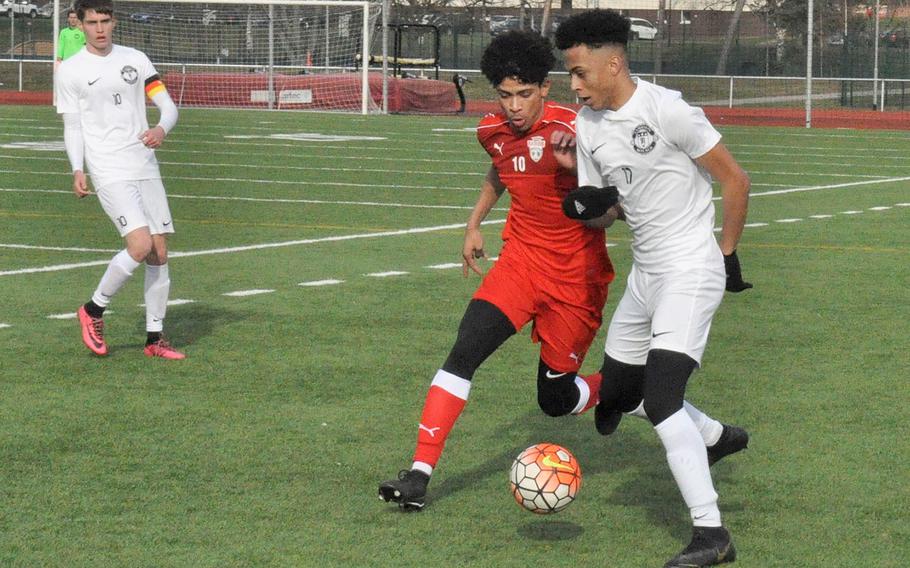 Tamar Holmes of the Ramstein Royals, right, and Genorace Armstrong of the Kaiserslautern Raiders compete for a ball in Ramstein's 2-0 victory Saturday, March 16, 2019, at Kaiserslautern High School (Gregory Broome/Stars and Stripes)

Tamar Holmes of the Ramstein Royals, right, and Genorace Armstrong of the Kaiserslautern Raiders compete for a ball in Ramstein's 2-0 victory Saturday, March 16, 2019, at Kaiserslautern High School (Gregory Broome/Stars and Stripes) 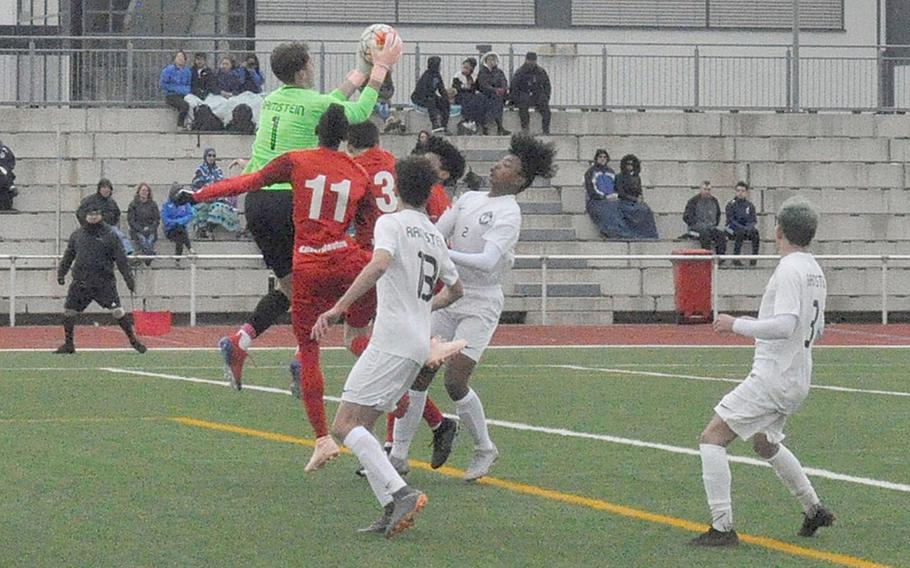 Ramstein Royals goalkeeper Garrett Erickson snares a ball among a crowd of teammates and opponents in Ramstein's 2-0 defeat of the Kaiserslautern Raiders on Saturday, March 16, 2019, at Kaiserslautern, Germany. (Gregory Broome/Stars and Stripes) 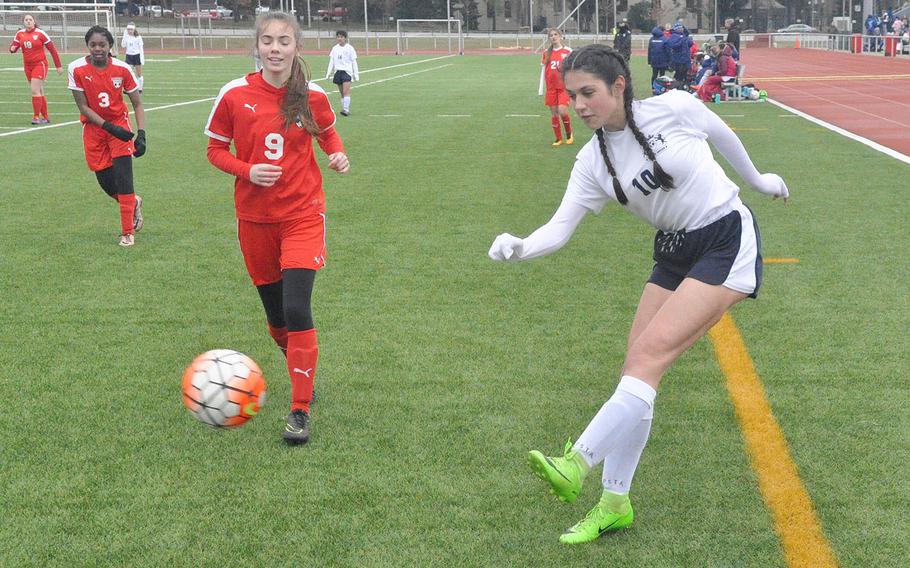 Ramstein Royals junior Rocio Fernandez sends a cross towards the goal in Ramstein's 5-1 defeat of the Kaiserslautern Raiders on Saturday, March 16, 2019, at Kaiserslautern, Germany. Fernandez finished with a three-goal hat trick. (Gregory Broome/Stars and Stripes) 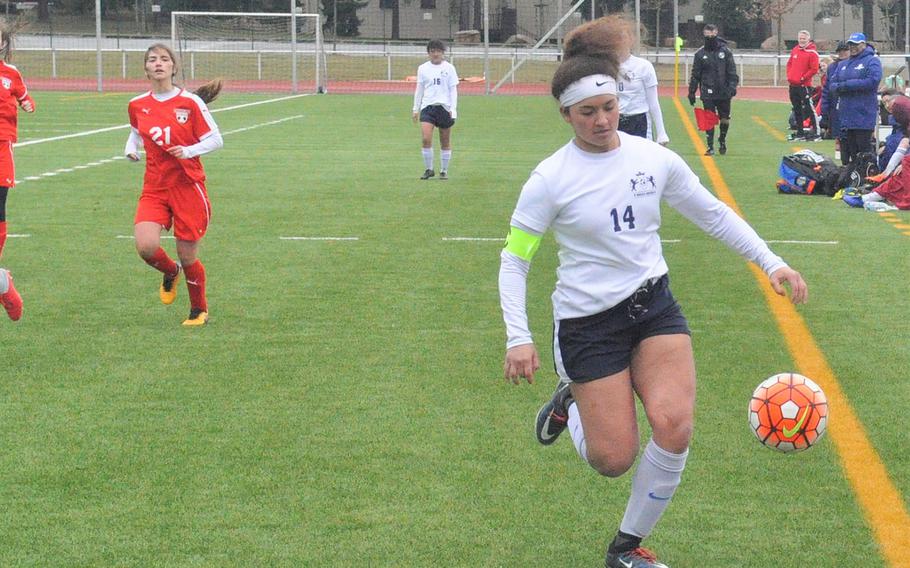 Ramstein striker Haley Deome pursues a ball down the sideline in the Royals' 5-1 victory over the Kaiserslautern Raiders on Saturday, March 16, 2019, at Kaiserslautern, Germany. Deome scored a goal in the win. (Gregory Broome/Stars and Stripes)

KAISERSLAUTERN, Germany — The Ramstein Royals heated up a frigid winter afternoon Saturday at Kaiserslautern High School, opening the 2019 DODEA-Europe soccer season with a convincing sweep of the host Raiders.

The Ramstein girls routed the overmatched home team 5-1, after which the Royal boys blanked the two-time defending Division I champions 2-0.

BoysRamstein 2, Kaiserslautern 0: The Royals scored a pair of first-half goals that held up as the final margin.

The ball bounced largely around the midfield throughout as both teams struggled to produce sustainable offense, so the game came down to the matter of capitalizing on what few opportunities did present themselves.

That’s where Ramstein claimed the advantage.

Conner Mackie, a recent Kaiserslautern champion now suited up for the archrival Royals, swung the game in his new team’s favor midway through the first half. Mackie pounced after Kaiserslautern keeper Alex Crossley stopped a Ramstein penalty kick, depositing the ricochet in the back of the net for the game’s first goal.

Jaden Buelvas added an insurance goal just before halftime off an assist by Christopher Slover, the tangible product of a consistent effort Buelvas lauded after the game.

“Our passes... were very accurate and to the foot,” Buelvas said. “Everywhere that we were going we always knew our teammate was going to be right behind us.”

That was the game plan for the Royals, who have long placed a heavy emphasis on defense while scraping together opportunistic offense on the other end. Head coach Dominik Ludes said his team followed that script Saturday, explaining that the Royals were “defensively strong” and “efficient with their chances” to score.

“That’s always key in a close game like this,” Ludes said.

Kaiserslautern coach Enrique John offered similar analysis, albeit from the opposite perspective.

“We made two grave mistakes in the defense,” John said. “Playing at this D1 level, mistakes like that are punished.”

Regardless, John said his young, revamped Raiders are at an acceptable phase in what they always knew would be a difficult, season-long development process.

“I’m in no way disappointed with the performance of my team,” John said. “It’s something to build on.”

GirlsRamstein 5, Kaiserslautern 1: The Royals paired a potent offense with a stingy defense in an overwhelming season debut.

Fernandez referenced a handful of chances she wasn’t able to convert, her frustration with a hat-trick performance suggesting just how much potential this Ramstein offense holds.

“For the team, I’m happy,” Fernandez said, explaining that the offense tended to veer towards her left side of the field on Saturday and that the Royals could become even more dangerous with a better balance. “I think we’re going to improve.”

Coach Katina Campbell was thrilled with her team’s performance Saturday, particularly the chemistry the team is already developing despite a number of new arrivals to the roster.

“I’m absolutely happy with the team’s progress and the unity they’ve been showing so far throughout the team,” Campbell said.

“Everybody is coming together.”