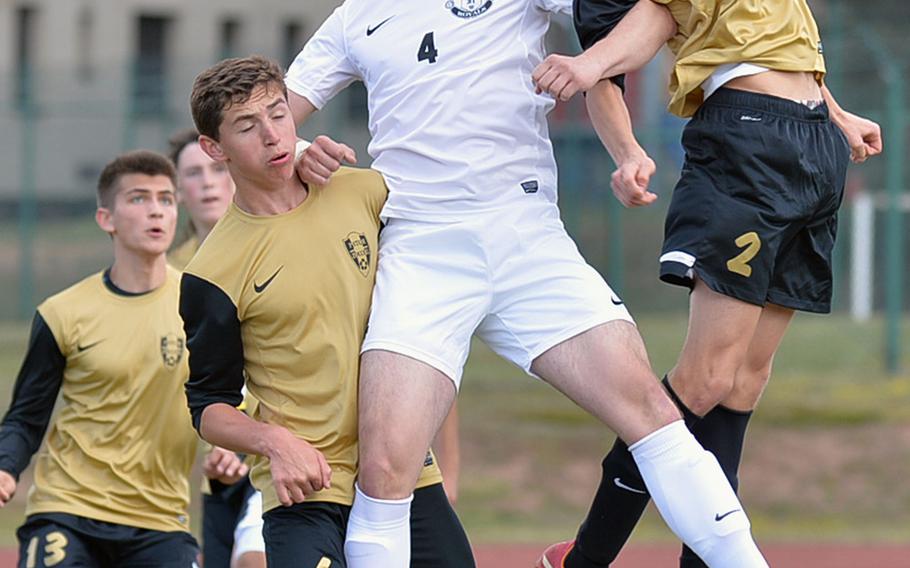 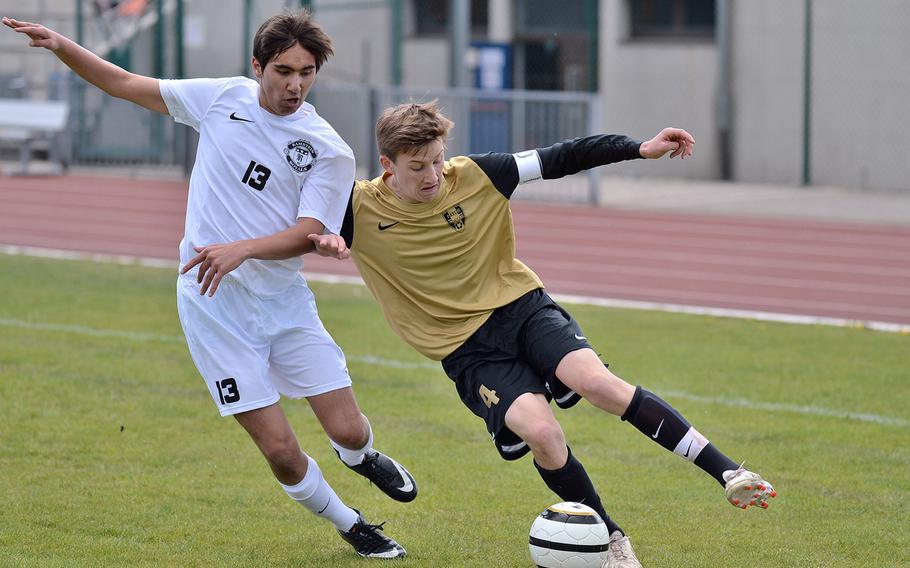 Ramstein's Deven Branham, left, and Patch's Christian Harvey fight for a ball during a game in Ramstein, Friday, April 18, 2014. The game ended 0-0. (Michael Abrams/Stars and Stripes) 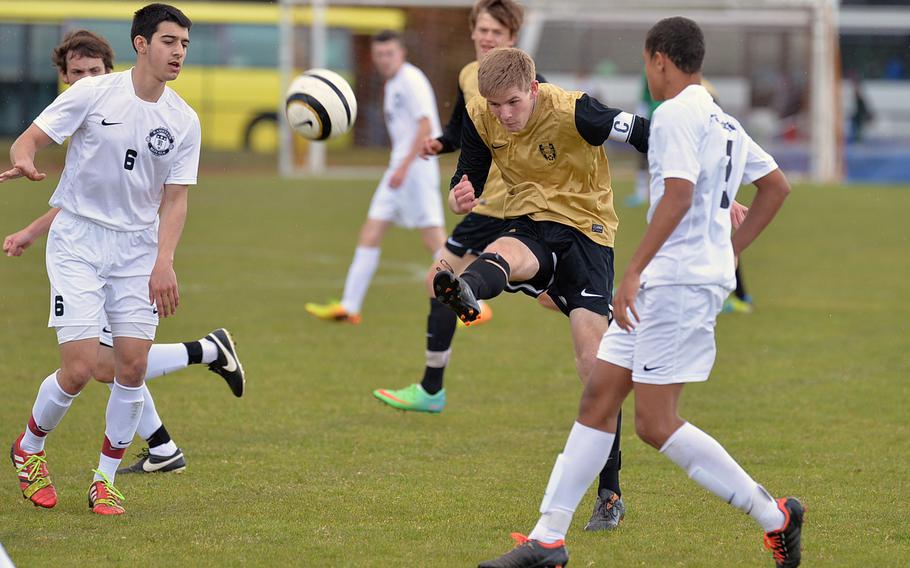 Patch's Christian Rauschenplat gets off a shot in his team's 0-0 tie with Ramstein Friday, April 18, 2014. At left is Brienno Illari, at right, Damon White. (Michael Abrams/Stars and Stripes) 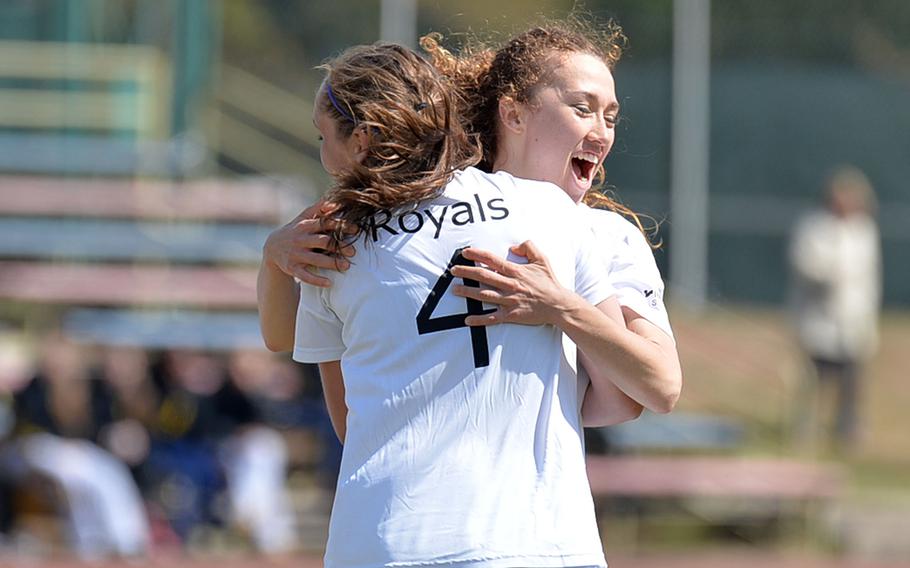 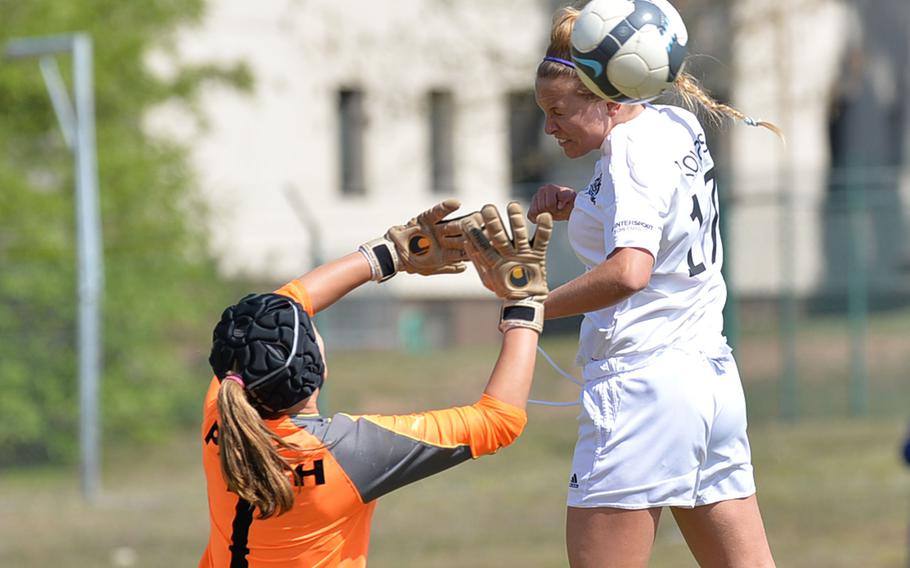 Ramstein's Shannon Guffey heads the ball past Patch keeper Goldie Bougher -- and past the goal -- in Ramstein's 4-3 win over Patch Friday, April 18, 2014. (Michael Abrams/Stars and Stripes) 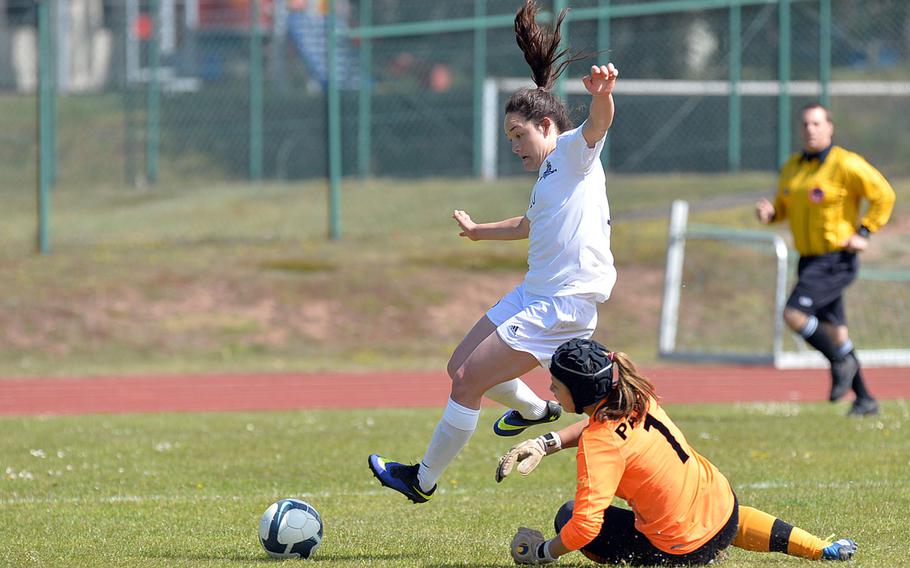 Ramstein's Ebony Madrid leaps over Patch keeper Goldie Bougher in Ramstein's 4-3 win over Patch on Friday, April 18, 2014. Bougher made a save on the play. Madrid scored Ramstein's earlier scored the first goal of the game. (Michael Abrams/Stars and Stripes) 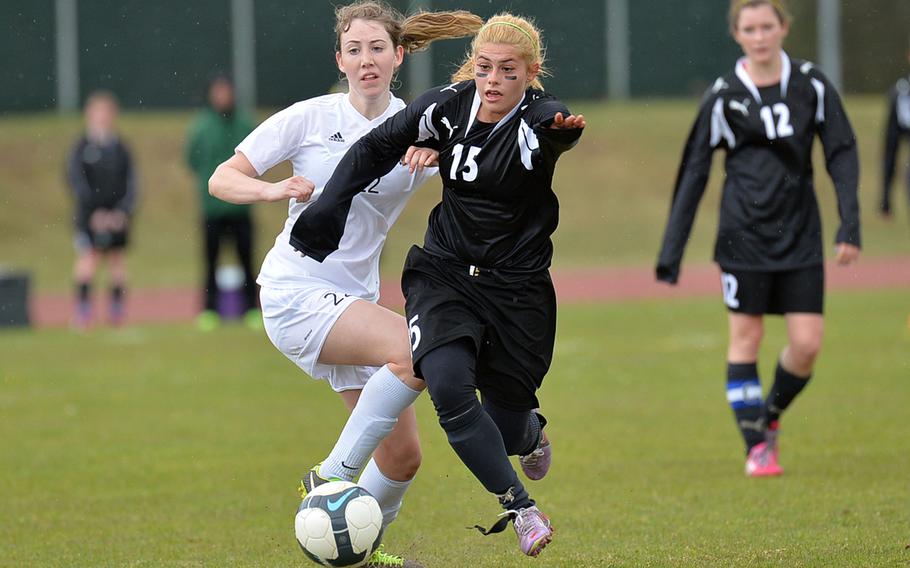 Patch's Kat Farrar, right, takes the ball up the field against the defense of Ramstein's Erin Barnet in a game won by Ramstein 4-3, Friday, April 18, 2014. (Michael Abrams/Stars and Stripes) 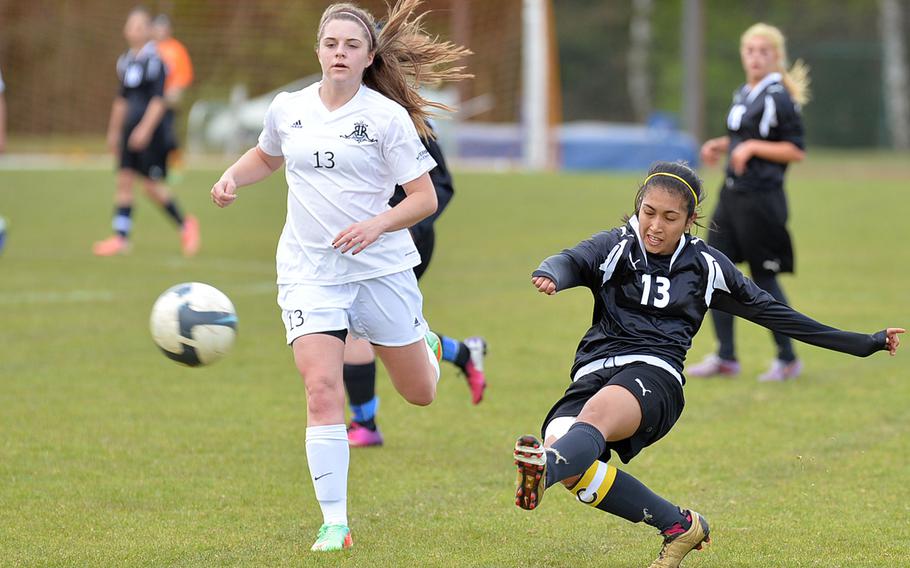 RAMSTEIN AIR BASE, Germany -- When two powerhouse soccer programs meet, one would expect to see a little of everything.

The two halves of the DODDS-Europe Division I doubleheader, while each closely-contested, were a study in contrasts. The Ramstein girls beat Patch in a fevered 4-3 rollick, while the boys played to a more conservative scoreless draw.

GirlsRamstein 4, Patch 3: The latest episode of perhaps DODDS-Europe's best ongoing rivalry packed a season's worth of action into its 80-minute run time.

While many of the goals that preceded it for both teams were scored off zany bounces and goal-box quirks of fate, the decisive score leapt straight out of an instructional video. Royal striker Ebony Madrid found some space deep in Panther turf, slipped an accurate pass to teammate Hunter Pace on her left flank and looked on proudly as Pace capably redirected the pass into the back of the net. The two jumped into each other's arms as the net still rippled.

As the hyper-aggressive catalyst of the Ramstein offense, the constant pressure Madrid applies yields scores for teammates like Pace at least as often as for Madrid herself. Not that there's anything wrong with that.

"That's fine with me," Madrid said. "An assist is just as good as a goal for me."

Madrid, who scored 40 goals last year for Osan in South Korea, got a goal of her own in the first half - part of Ramstein's push to a 2-0 halftime lead. The Panthers pushed back with two early scores in the second half, leading to a wild finish appropriate for the pair of rivals that have dominated the Division I title picture over the past half-decade.

Pace knocked in a whirling goal to put 2013 runner-up Ramstein up 3-2, to which Amber Garcia quickly responded with an unassisted goal for the defending champion Panthers. Madrid's dish to Pace finally settled the issue.

Madrid said she had an opening to take the shot herself, but deftly deferred to the cleaner look Pace enjoyed from the wing. "Don't get me wrong, I did want to shoot," Madrid said. "But she had a better shot than I did."

Dominique Dubois scored Ramstein's other first-half goal. Kat Farrar and Danielle Mannier scored for the Panthers, while Garcia paired an assist with her goal.

BoysRamstein 0, Patch 0: Scoreless ties aren't always as deflating as they seem from the sidelines. For a goalkeeper, a scoreless tie has its redemming qualities.

"It's not really a bad thing. I don't think it's a boring game. It's not necessarily a fun game either," Panther goalie Brandon Danielson said. "When two good teams play, that's pretty much what you get."

Danielson described the delicate dance that is required of a goalkeeper in a defensive struggle.

A goalie must "concentrate on finding the ball" even when it doesn't pose an immediate threat, Danielson said. But he must also stay aware of the larger picture developing in front of him.

"When you do follow the ball, make sure that you don't really go to sleep watching the ball," the Panther senior said. "You always have to make sure that your teammates are lined up correctly. Work together with the back four, so anytime you get a turnover, we're already set."

Danielson made a handful of challenging saves to maintain the zero-all tie, but the shots on goal came sparingly for both sides.

Neither team organically produced any scoring opportunities; the rare flirtations with the net came via free kicks and corner kicks.

The rigors of Friday's scoreless draw will pay dividends as the teams prepare to compete next month for a European championship, Ramstien coach Dominik Ludes said.

"Those are the kind of games that get you ready for the tournament," Ludes said.