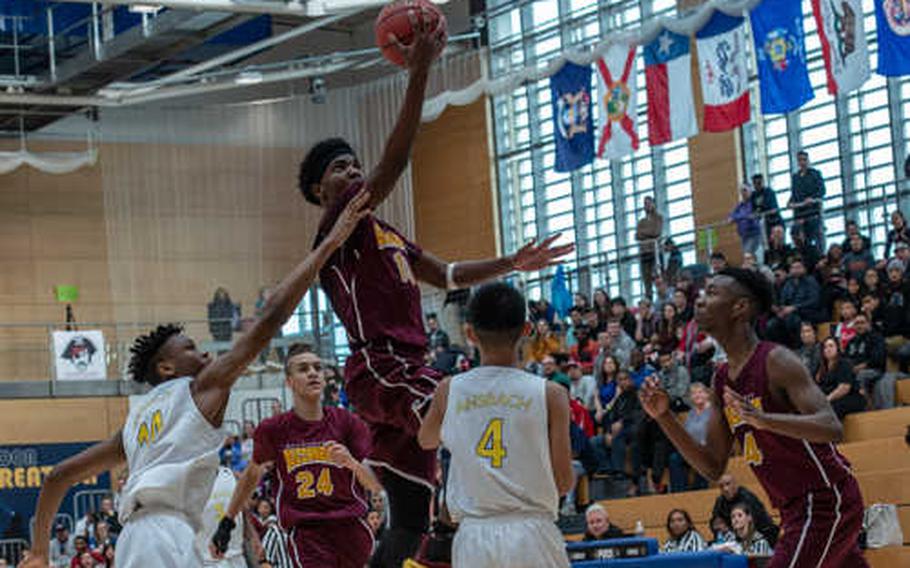 Chandler Pigge’s game rests at the intersection of tantalizing potential and proven performance, and of individual dominance and collective success. All of that was on display in Pigge’s stunning 32-point performance in the 2018-19 DODEA-Europe Division III championship game, when the sophomore wrenched the momentum from a rolling Ansbach squad and pointed the way to a 70-65 win and a second straight Bucs title. But that title-game tour de force was only the most public exhibition of Pigge’s excellence. Pigge, the 2018-19 DODEA-Europe boys basketball Athlete of the Year, averaged 27 points, 15 rebounds, six assists, over four steals and nearly three blocks per game this season, a stat line befitting his comprehensive impact on the game. He was dominant even against DODEA-Europe’s best competition; Andrew O’Connor, coach of Division I champion Ramstein, said Pigge was “unstoppable” in hanging 33 points on the Royals in a January matchup. “Chandler is a relentless player,” said Dewayne Pigge, Baumholder’s head coach and Chandler’s father. “This young and amazing player is a strong force on the court and will stop at nothing to win for his teammates.”Finalists: Naser Eaves, Ramstein; Jacob Fortune, Black Forest; Gabe Fraley, Ramstein; Tyrese Harris, Wiesbaden; Ervin Johnson, Kaiserslautern. broome.gregory@stripes.com Twitter: @broomestripes