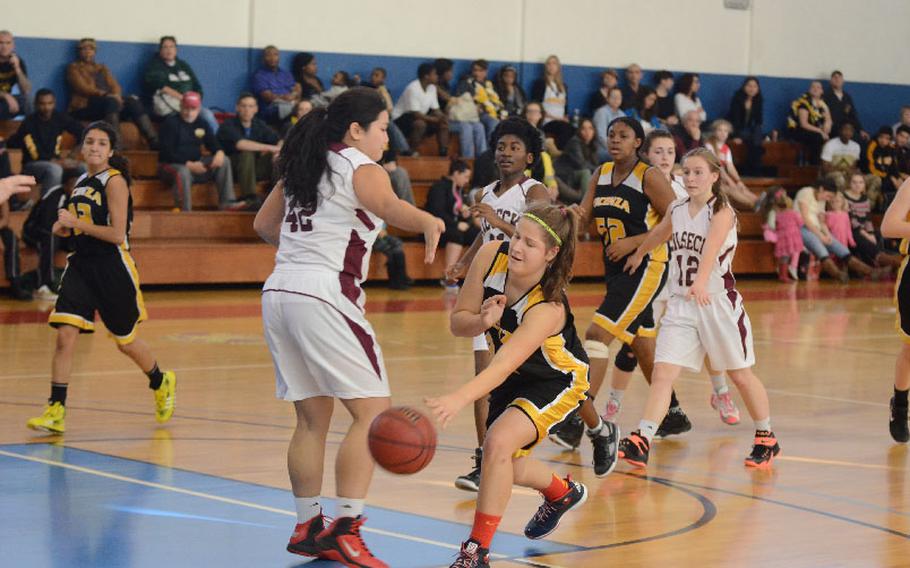 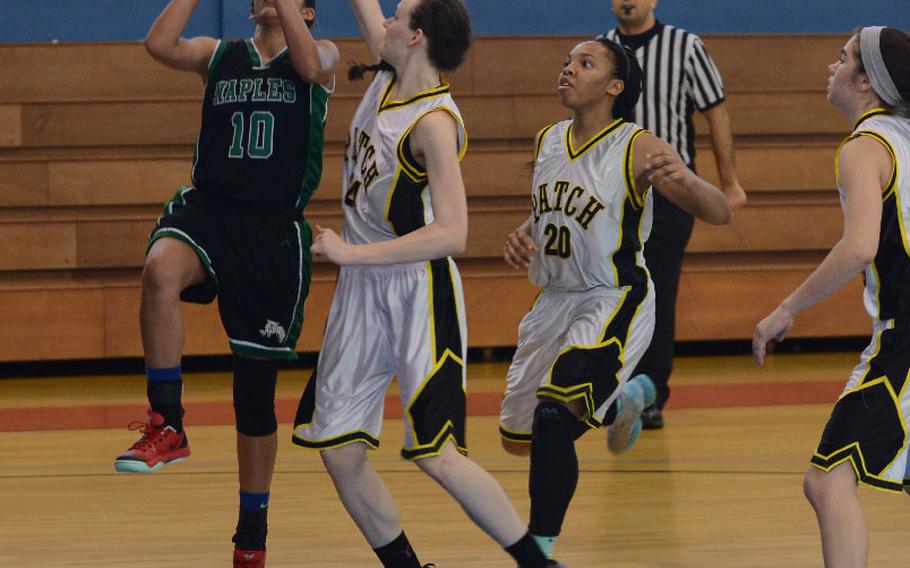 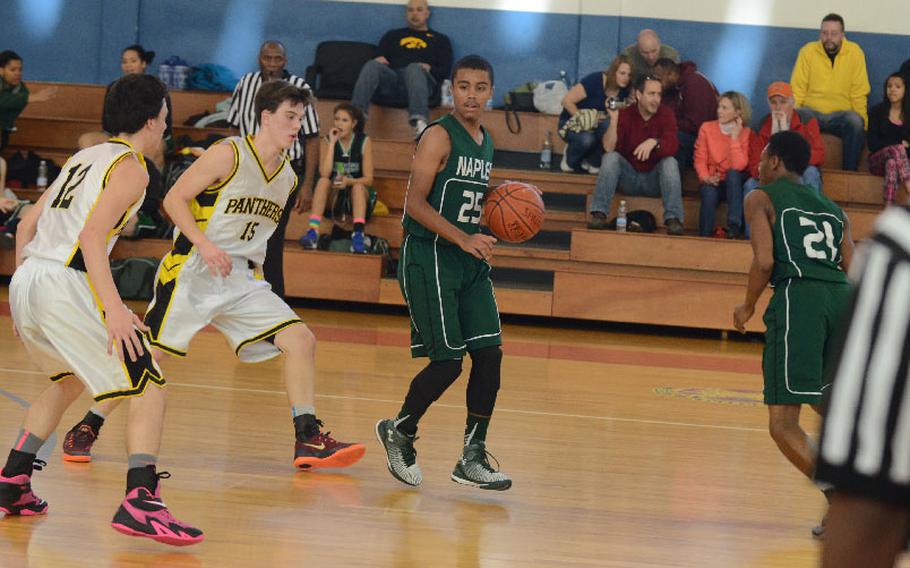 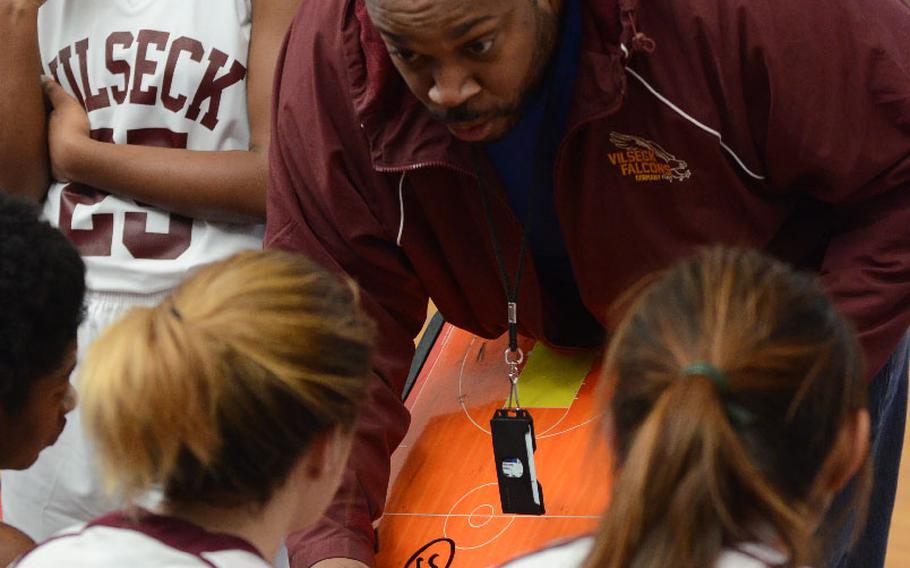 Vilseck coach Adrian Crawford gives his team pointers before heading back on the court Saturday during a basketball game against Vicenza at Vicenza, Italy, Jan. 24, 2015. (Jason Duhr/Stars and Stripes)

VICENZA, Italy – It almost seemed like a repeat of Friday night, when Division I teams converged Saturday at Vicenza for a second day of play.

There was one notable difference: Vicenza’s girls would pull out a win from Vilseck, swapping places with their Naples counterparts as the only Italian-based team to come up with a victory.

Vicenza girls 27, Vilseck 26: The Cougars and Vilseck appeared to be evenly matched as they rounded the end of the second quarter tied at 18.

For the first half, the Cougars relied heavily on Emma Knapp to connect the dots with teammates and goals. “I knew it was going to be close and it really mattered who would get the ball and to an open person,”

Knapp accounted for 12 field goals, nine rebounds and three steals. She fouled out with her team clinging to a 26-22 lead in the third – shortly after the Falcons’ Janin Powers succumbed to the five-foul rule just moments prior.

Aerial Rouse scored what would eventually be the winning point.

“We have quite a road to climb ahead of us,” Kohut said of the future competition.

Vilseck boys 66, Vicenza 42: Vilseck coach John Sabala was equally as happy with Saturday’s games as he was with Friday’s.

“It’s another complete game for us, focusing on solid defense and rebounding,” Sabala said of his team’s third win of the season.

But the game started off in favor of Vicenza, though barely, as the Cougars led, 13-12, after a quarter.

“We started off with the game plan and then they started to execute,” Vicenza coach Jesse Woods said of his starters. “It was a good show.”

But the sizzle from the first quarter died down as rotations of players started.

“The guys coming off the bench didn’t stick to the game – we just got away from it – and it showed,” Woods said.

“Patch was a big team, but I think we’re kind of matched up with Vilseck,” Woods said.

“We had 14 turnovers today, but we have averaged 27,” Sabala said of his team making improvements. “We’re just taking much better care of the ball.”

“Another team win with nine of 11 players putting up points,” Sabala said.

Patch girls 37, Naples 29: Each team put four points on the board during the first quarter, but would steadily ramp up their pace until the fourth.

“We had to go man-to-man in the fourth, because they have a really good post,” Patch coach Melody Green said.

“I’m glad to have the new competitors,” Green said. “They’re a great team and will be a force at Europeans.”

But before the Panthers get that far, Green realizes there are a few things her team still needs to work on.

“We need to hit our free throws,” Green said of the four they made out of 15.

As for what Naples Coach Tim Smith said of what his team needs to work on: “We just need to pass better, shoot better and we just got out-rebounded.”

Treshon Jenkins took top scorer of the game with 17 points.

Patch boys 51, Naples 44: If seemed to take a motivational speech from coach Craig Lord to get the Wildcats going.

“You guys have to give 100 percent -- this is the same game we’ve been playing,” Lord started off saying partway through the third quarter after calling a timeout.

“Play like you want to be out there,” Lord concluded, seconds before Wildcat Titus Best would go out on the court following the timeout and immediately score a two-pointer –part of a 19-point team effort in the period that equaled the combined total it had scored in the first two quarters.

The Wildcats’ Terren Staten was certainly awake, finishing with a game-high 28 points.

“We got it together, we came out kind of sleepy at the beginning of the third, but they woke up and played really hard,” Lord said.

KC Evans would add 10 points for Naples, which still short to the unbeaten Division I champions.

“We realized that this is possibly the best team in Europe and I told the team this is the best opportunity to learn,” Lord said.

Patch coach Brad Rehwaldt knew he had a challenge when Naples picked up the pace.

“Their shooting was outstanding,” Rehwaldt said. “They were getting open shots and used their offense.”

“I tried to get the players to be aware of where he was,” Rehwaldt said. “If we stay close to him, he backs off.”